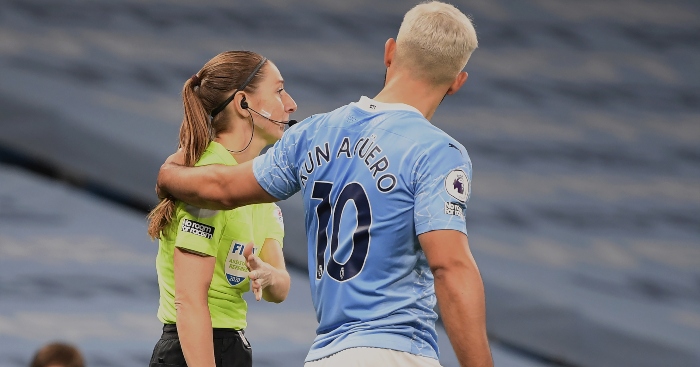 Pep Guardiola has defended striker Sergio Aguero after he was criticised for putting his arm on the shoulder of assistant referee Sian Massey-Ellis.

Aguero, making his first appearance since June after a knee injury, disputed a throw-in call which went against him early in the second half of .

After arguing his case with Massey-Ellis, Aguero then put his arm around her shoulder as she began to walk away – actions which drew attention on social media and led his former team-mate Micah Richards to say on Sky Sports that Aguero should “know better”.

Under rules introduced in 2016 players can be cautioned or sent off for touching match officials depending on the nature of the incident, but Aguero’s actions went unpunished.

This is gross, unprofessional, and unacceptable pic.twitter.com/N0iGzr73fS

In his post-match press conference, Guardiola said: “Come on guys. Sergio is the nicest person I ever met in my life.

“Look for problems in other situations, not in this one.”

Aguero, who played a key role in setting up Raheem Sterling’s decisive 23rd-minute goal, was replaced after 65 minutes of his comeback appearance.

Authorities say a man being held on bail at a Riverside County jail who had tested...

Prosecutors have recommended that the 56-year-old "Full House" star be sentenced...

A month off, then 50 days on: Could ‘intermittent lockdowns’...

Is this a glimpse into South Africa's future? The battle against COVID-19 could...

The cause of the fire is under investigation.

(Partner Content) Despite restaurants been given the green light to reopen for sit-in...

The Strokes, Tyler The Creator & Gorillaz Confirmed for...

It’s something of a “Feel Good Inc” development from Splendour’s producers Jessica...

What the best companies for blue- and white-collar work...