Pinterest Is the Fashion Destination for Generation Z—Here's Why

It's not just for your DIYs. 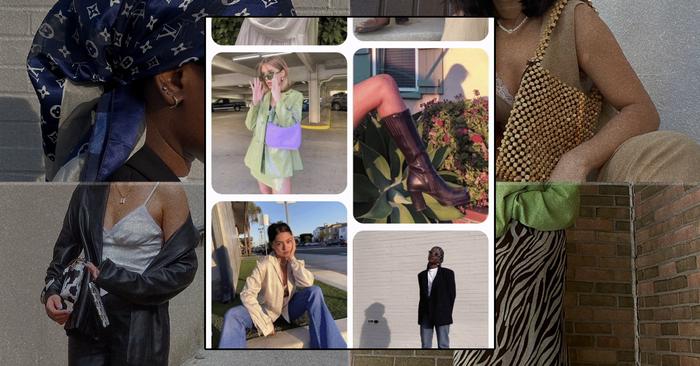 While Pinterest once reigned as the platform dedicated to all things DIY and party-planning galore, the fashion part of the website has seen significant growth recently amongst Generation Z. A simple scroll on fashion TikTok or YouTube and you will find a variety of videos where users are either re-creating “Pinterest outfits” or showcasing the outfits they love and have pinned to their boards recently. And when a girl with a fashionable look goes viral, her comments are often flooded with “What's your Pinterest account?”

According to Enid Hwang, Pinterest's community marketing manager, Generation Z is highly interested in aesthetics, with their search for the word ranking 447% higher than with Millenials. “On Pinterest, Gen Z’s journey to discover their identity and passions is ever-present, as they open-mindedly save ideas to boards and find more along the way,” said Hwang in a public report. It's evident that with image sharing app, the younger generation is creating boards that reflect their dream lifestyle, along with how they wish to dress and present themselves. To dive deeper into the fashion realm of the platform, I reached out to four girls who have created a popular social presence for themselves amongst not only Pinterest, but TikTok and Instagram as well, and have earned the love from the younger generation, inspiring them with their sense of style.

Why do you think you and other Gen Z’ers are using Pinterest more often as a source of fashion inspiration as opposed to other sites or apps?

While the search bar and hashtags do exist on Pinterest, the app is really unique in the sense that the algorithm is constantly feeding you new photos that are similar to ones you’ve already pinned which is really useful when it comes to finding fashion inspiration. So it comes to a point where I don’t even need to search up keywords to find inspiration—I can simply log onto the app and I expect I will be met with a plethora of new photos.

Many people have said that Pinterest has helped shaped their lives, attributing to “dream” mood boards, career goals, lifestyle, etc. Is this applicable to your life and if so, how?

Pinterest has provided me an easy way to virtually curate “vision” boards, which has been such an important and powerful step in eventually bringing my visions to life. I would say Pinterest has helped me build my “dream” style. The boards I create bring me exactly the inspiration I need to take risks with my own style and actively think about new ways I can spice up my closet. Also, more often than not, I end up pinning outfits that end up having a common piece, such as a specific leather jacket. Then sometimes I somehow end up finding a similar piece in the thrift store! It’s almost as if Pinterest has a way of working that kind of magic into my life.

Funky patterns, the '70s prints are back and I’m living for it. There are so many pieces in thrift stores with unique patterns and prints, so I always look to Pinterest for ideas of how to style them. I've also been seeing patchwork show up over and over in so many cool outfits. Some people have been reworking fabric from thrift stores, and others have been utilizing vintage patchwork pieces. The style is so eye-catching. Berets have also made their way into my wardrobe, and I know of so many others who have done the same especially ever since Emily in Paris released on Netflix!

Pinterest has 1000% played a role in polishing my style. I’m a little scatterbrained and I can appreciate many different aesthetics. Because of this, I’d go out to stores and buy almost anything I thought was cool. I'd end up with all these cool pieces but nothing worked together and they weren’t exactly me. When I made my Pinterest, I made sure to only save things I felt personally connected to. By creating boards and seeing how everything worked together in one place, I could pinpoint exactly what I liked. It helped me shop more consciously and put better outfits together.

Many think that there’s a notion of the typical “Pinterest girl” not being as diverse as it should. How would you like to see that change amongst the app as well as within the online fashion community?

As a Black girl, I hate that I always need to add the words “Black girl” to most of the things I’m searching for on Pinterest because otherwise, the default is skinny white women. And that goes for anything beauty, hair, style, etc. And even when I’m looking at Black-oriented or hijabi content, I’m presented with the same looking people every time. I wish the online fashion community as a whole would embrace diversity the way it claims to. I’m so over tokenism within the industry. I want to see plus-size people, disabled people, dark-skinned people, etc. just as paid and just as booked as their counterparts.

Some fashion trends I’ve been loving on Pinterest are chunky boots and slouchy trousers.

I’ve read people say that they love Pinterest because “it’s like social media without the social,” as it’s more of a personal experience rather than focusing on other people. Do you agree, and is that what draws you more to the app?

It’s interesting because before I started posting on Pinterest, I would have agreed it was more just pretty pictures with none of the social aspects. As I’ve gained a following, I get comments and direct messages daily, and I can’t say they are all positive. In fact, the longer I’ve been on Pinterest, the more I’ve noticed my and other creator’s comments get bombarded with people picking apart appearances. It was so shocking, and I believe because people have this idea that Pinterest is just a website for inspiration, they forget that there are real creators behind some of the accounts that generate content. It hasn’t been all negative feedback, however, and I have received a lot of encouraging messages from people as well. I believe there is a social aspect to the app and Gen Z is what will change the website drastically with how they utilize the platform. Pinterest is turning more into a social media platform than people realize.

I have eyes for all things colorful, so the fashion trends or “aesthetics” that I like to stay on top of are kidcore and pastelcore, as well as It-girl trends like sparkly pants, chunky plastic/polymer rings, baby tees, and surprisingly, Uggs have also been on my recent searches (hello, 2009!)

Many think that there’s a notion of the typical “Pinterest girl” not being as diverse as it should. How would you like to see that change amongst the app as well as within the online fashion community?

I think with any section of the fashion industry, the non-POC girls tend to rise to the top. Pinterest has great potential for pushing non-traditional beauty standards. If you open up your Pinterest and see a girl who doesn’t look like you, wearing something you like, then you lose the idea that a certain type of fashion is just for people who fit a certain stereotype and if they can use their algorithm to help boost that type of content, I think they could really create some true change and dialogue within the fashion industry for the younger generation.

Why do you think you and other Gen Z’ers are using Pinterest more often as a source of fashion inspiration as opposed to others?

I think because it’s super personal. Not only can it help you with fashion but you can also learn about mental health, manifestation, and much more. Plus nobody is trying to sell you things, which I know sounds funny because I’m an influencer, but outside of material things, on other platforms, people are always trying to sell you on something—whether it’s their aesthetic, their way of thinking, etc. Pinterest is just, “This looks sick, do you like it? Okay, here’s more!” and you can't beat that.

I love old school John Paul Gaultier, so I’ve been obsessed with looking up mesh printed tops, but I also love super-’60s mod looks, because I think they have this inherent quirkiness to them that makes you feel happy to see such bright and crazy colors. I’m always looking for knee-high boots, but lately, I love different colored ones—especially white, which is big this season.

25 Winter Boots That Look Cool But Don't Cost a Ton

Non-Scary Bikinis Exist, and I Found Them

This Supplement Has Actually Changed My Dry, Fine Hair...

The Most Popular Lingerie Brands of 2020

43 Lingerie-Inspired Swimsuits That Will Make You Do a...