Pregnant Asylum-Seekers Needed Help at the Border. Inside the Program That Provided Care—and Community

Xiomara was already having labor pains when she presented herself to U.S. Border Patrol officials to make a claim for asylum. She had fled gang violence in El Salvador six months earlier, working under the table in Mexico to afford bus tickets for her and her three young children to make it to the border.… 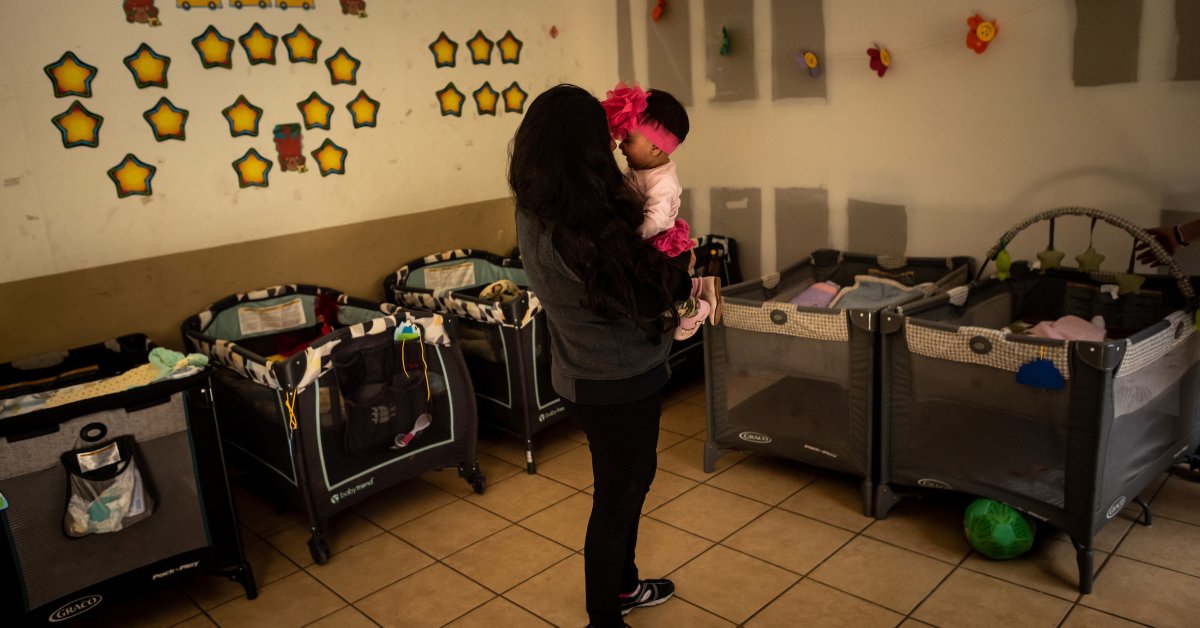 family separations and was worried about losing her kids if she were hospitalized, so instead she was sent back to the streets of Ciudad Juárez at night, alone with the children and with another on the way.


“It was sad, and I started to cry,” Xiomara, 33, tells TIME in Spanish. “I really thought they would let me through to the U.S.” Instead, she says, officials kept telling her “that I shouldn’t have showed up.” It was May 23; the U.S. government’s rule, which states that any migrants showing up at the border be immediately turned away to Mexico, even if they wish to make a claim for asylum, an international right, because of the risks posed by COVID-19, was put in place in March. Since then, CBP has conducted more than 444,000 “expulsions” of this type at the U.S.-Mexico border.

After a kind stranger in Juárez told Xiomara the name of a shelter he knew, she took her children, ages 10, 6 and 4, only to find it was full. But it didn’t matter: in any event, Xiomara and her children would have to quarantine in a hotel for two weeks before being allowed into any shelter. An official from the Hotel Flamingo—which has since been dubbed Hotel Filtro, or “Filter Hotel” for its reputation with migrants—came to pick her up. There, Leticia Chavarría, a Juárez physician and fierce advocate for migrant women, offered to examine her at no cost.

It was the first time Xiomara had seen a doctor throughout her pregnancy, but not for lack of trying. A doctor’s visit in Mexico would have cost her more than 3,000 Mexican pesos—about $143. She didn’t have the money.

It is impossible to know how many pregnant people have ended up stranded in Mexico as a result of Trump-era immigration policies, including expulsions; the Migrant Protection Protocols (MPP), otherwise known as “Remain in Mexico” policy; or “Metering,” which required those planning to claim asylum to take a number and wait in Mexico before making an initial claim. MPP alone has kept more than 71,000 people waiting in Mexico for their asylum claims to be adjudicated in the U.S. since the policy began in January 2019. As of January of this year, more than 29,000 people still have active MPP cases, according to Syracuse University’s Transactional Records Access Clearinghouse, a research organization. Given how many women have arrived at the U.S.-Mexico border in the past two years, it’s reasonable to estimate that there have been thousands who were pregnant, or became pregnant while they waited to cross into the U.S.

Though the MPP agreement grants asylum seekers access to Mexico’s health care system, actually using it is difficult. Migrants from across Latin America may not know how to navigate the Mexican health care system, have the right documents with them or be able to afford care, and face discrimination because of their immigration status.

“This is a total vulnerability that these women face,” Chavarría tells TIME in Spanish. “They’re women; alone with children; and, on top of that, migrants; on top of that, pregnant.”

Being an asylum-seeking woman can increase the risk of a stillbirth or abortive outcomes, according to German researchers who studied pregnant asylum seekers in South Germany between 2010 and 2016. The physical stress alone can complicate their pregnancies, to say nothing of the emotional stress. Chavarría has encountered women experiencing miscarriages or other dangerous complications, without health care.

Luckily for Xiomara, her chance meeting with Chavarría led to becoming one of the first members of Las Zadas (short for embarazadas, meaning “pregnant” in Spanish), a project launched in June by immigration lawyer Taylor Levy, along with a midwife and several community organizers in Juárez, to try to keep pregnant asylum seekers from falling through the cracks. Las Zadas—the only program of its type along the border—provides free health care, legal advice, products for babies, and pre- and post-natal care like vitamins, menstrual pads and breast pumps. Some of the women live together at San Juan Apóstol, a Juárez shelter for migrant women, while receiving treatment, so they can support and advocate for each other.

On June 6, just 14 days after Xiomara was turned away from the border, Chavarría helped her to a hospital where she delivered a healthy baby girl. But her journey wasn’t over: still in limbo, Xiomara and her four children have now been living at San Juan Apóstol for eight months.

As COVID-19 began spreading throughout the U.S. in March 2020, immigration courts temporarily shut down, increasing wait times for those under MPP. The Department of Justice’s Executive Office for Immigration Review (EOIR) would announce court closures on its website, or via Twitter, and many asylum seekers missed the notices. They’d show up at ports of entry ready to make their case to a judge, only to find out their court date had been canceled.

Beginning at 4 a.m., Levy would stand at the Juárez side of the Paso del Norte international bridge connecting Juárez to El Paso, Texas, several times a week to meet those asylum seekers and break the news. “There were a lot of women coming who were visibly pregnant, just devastated by the fact that the courts had been canceled,” Levy says. “It was during those cold dark mornings, where I started thinking about creating this project.”

Some of the women told Levy they had never seen a doctor, didn’t know where they would give birth and that they had been turned away from hospitals. “[It was] really kind of scrappy from the beginning,” Levy says of Las Zadas’ early days. Levy gave free legal advice, while midwife Anna White provided prenatal care. They’d meet at the offices of Juárez nonprofit Derechos Humanos Integrales en Accion (DHIA). DHIA and the Hope Border Institute have funded the bulk of Las Zadas’ expenses. If a woman needed shelter, she’d be referred to San Juan Apóstol, where coordinator Karina Breceda could assist her. There, Chavarría and Patricia Galarza, a Juárez psychologist, offered free physical and mental health care.

“[My team is] basically on call 24/7,” Breceda says. “There’s a lot of peace, and a lot of healing with the work that they’re doing. The situation here in the city [Juárez], it’s sometimes a very unsafe place and the women go through crises.”

In Mexico, asylum seekers are often victims of kidnapping, robbery, rape and extortion. Human Rights First, an advocacy organization, has documented more than 1,500 public claims of violence against asylum seekers under MPP. Xiomara, who says she fled gang members in El Salvador and is a survivor of sexual assault, says giving birth triggered the difficult traumas she was grappling with. “I felt very strange; I’d look at [my daughter] and it was almost like I didn’t want her,” Xiomara says, citing a common symptom of postpartum depression. Therapy at San Juan Apóstol helped her, she says, “and four months after [the baby] was born, I was able to be affectionate with her.”

The support of the other women in the program can be just as valuable. Isa, 32, an asylum seeker from Honduras, first found refuge with her young son at a shelter housing roughly 1,300 people in Juárez, but food was scarce, she says, and overcrowding kept her on constant alert. Seven months ago, Isa was brought to live at San Juan Apóstol, and three months later, she gave birth to a healthy baby girl. The women gathered around, oohing and aahing over the baby and celebrating her birth.

Each day they’re up by 6 a.m., feeding the babies and rotating shifts of laundry, cooking and washing dishes while the children play together. If one feels overwhelmed, others serve as a buttress, helping her with childcare and breastfeeding, and sometimes even stepping in as wet nurses. They often break out in song; “El Color de Tus Ojos” (The Color of Your Eyes) is one of Isa’s favorites.

All told, Las Zadas has supported about 120 women, and helped bring an estimated 68 babies safely into the world.

Despite the care and community, Isa says the wait in Mexico has made her anxious. On Feb. 19, the Biden Administration began processing some asylum seekers in Tijuana into the U.S., the first step in unraveling MPP. Slowly, an estimated 25,000 asylum seekers, including Isa, will be able to enter the country.

“Now that we know we’re so close we feel even more desperate,” Isa says in Spanish. “We really don’t know how much longer we’ll have to be here.” She hopes to reunite with a friend in New York, who has a safe place for her to stay while her asylum case is decided. Her ultimate goal is to afford a good education for her children. “I want them to have a future,” she says. “Any future that they want, and security as well.”

Xiomara’s case is more complicated. While MPP is winding down, expulsions continue at the border, with no clear answer from the government whether these migrants will have a second chance to apply for asylum. She wonders aloud if participating in this interview might help her chances.

“First and foremost, all I want is safety for myself and my children. I have faith in God that things will get better,” Xiomara says. “That’s all I can do.” 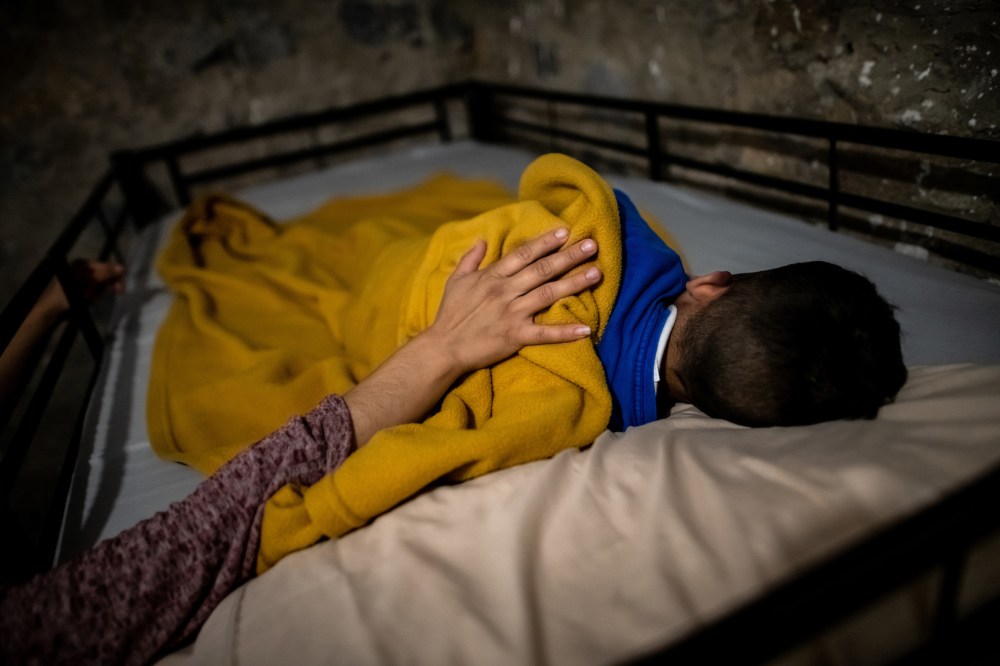 Meridith Kohut for TIMECarmen puts her son to sleep.

The 7 Stages Of Dementia

Europe Is Considering COVID-19 Vaccine Passports. Should the Rest of the World Catch...

Do YOU Understand the Dangers of Hormone Therapy?

Why Social Distancing Should Not Be the New Normal

The Internal Battle: You, Food, And Your Digestive Tract

The Role of Metabolic Health in Better COVID-19 Outcomes

Daily decisions about risk: What to do when there’s no...

How Medical Technocracy Made the Plandemic Possible