Buckingham Palace have confirmed Prince Harry will attend The Duke of Edinburgh's funeral at St George's Chapel in Windsor next Saturday, April 17. It will be a slimmed-down service amid the COVID-19 pandemic that will be entirely closed to the public.

Philip, also known as the Duke of Edinburgh, took part in planning his funeral and its focus on family was in accordance with his wishes. The 99-year-old duke, who died Friday, also took part in designing the modified Land Rover that will carry his coffin. "Although the ceremonial arrangements are reduced, the occasion will still celebrate and recognise the duke's life and his more than 70 years of service to the Queen, the UK and the Commonwealth," a palace spokesman said Saturday while speaking on condition of anonymity in line with policy.

Prince Harry, Philip's grandson who stepped away from royal duties last year and now lives in California, will attend the service along with other members of the royal family. His wife, the duchess of Sussex, who is pregnant, has been advised by her doctor not to attend.

Downing Street has announced UK Prime Minister Boris Johnson will not attend the funeral, to allow another family member to take his place.

"The prime minister has throughout wanted to act in accordance with what is best for the Royal household, and so to allow for as many family members as possible will not be attending the funeral on Saturday," a statement from Downing Street said on Saturday. 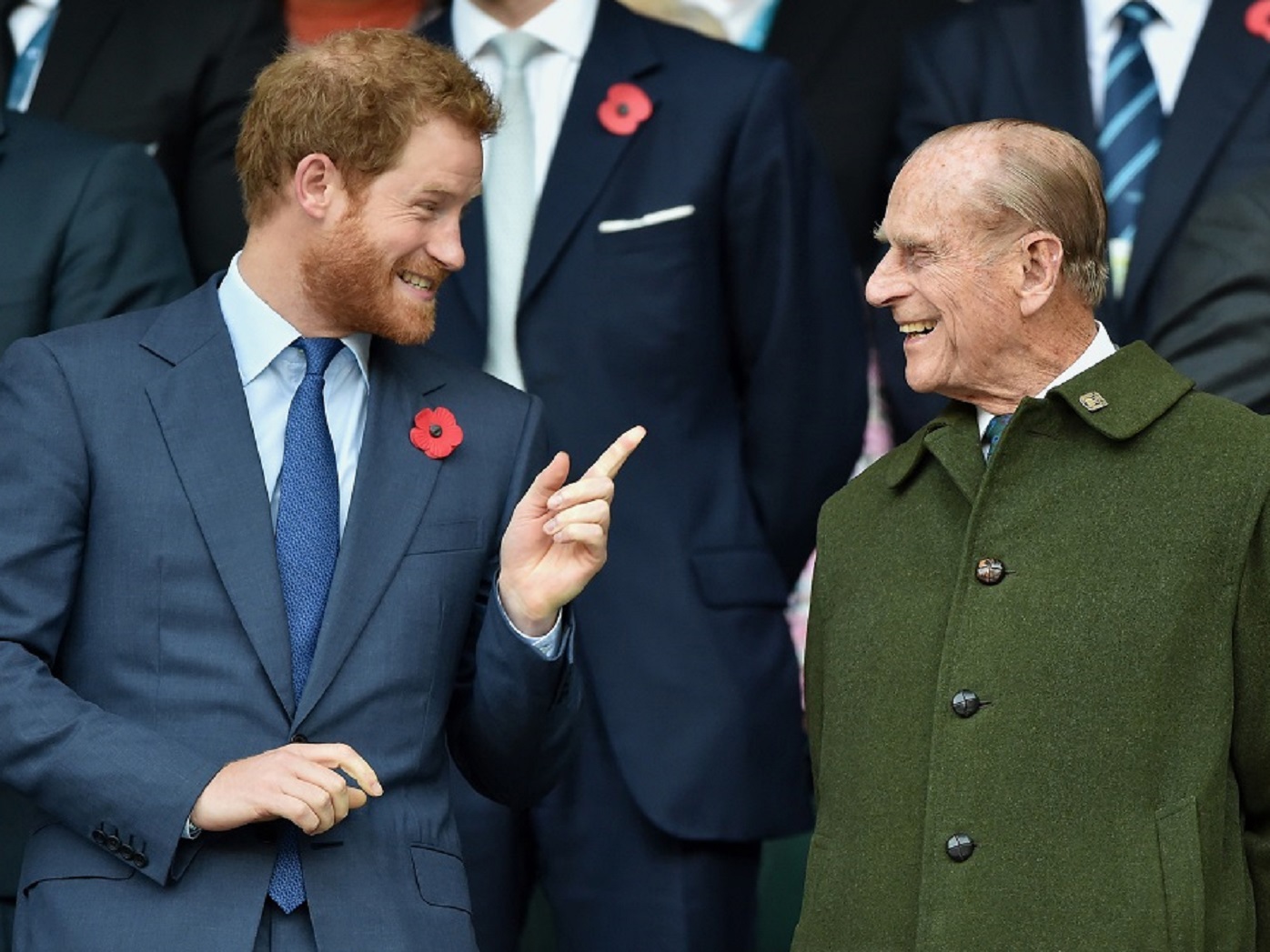 Palace officials said the ceremony would be conducted strictly in line with the British government's COVID-19 guidelines, which restrict the number of people attending funerals to 30.

They declined to say whether the royal family would be required to wear masks.

The palace appealed to the public not to gather in Windsor, and for those who wished to pay their respects to Philips to stay at home instead. 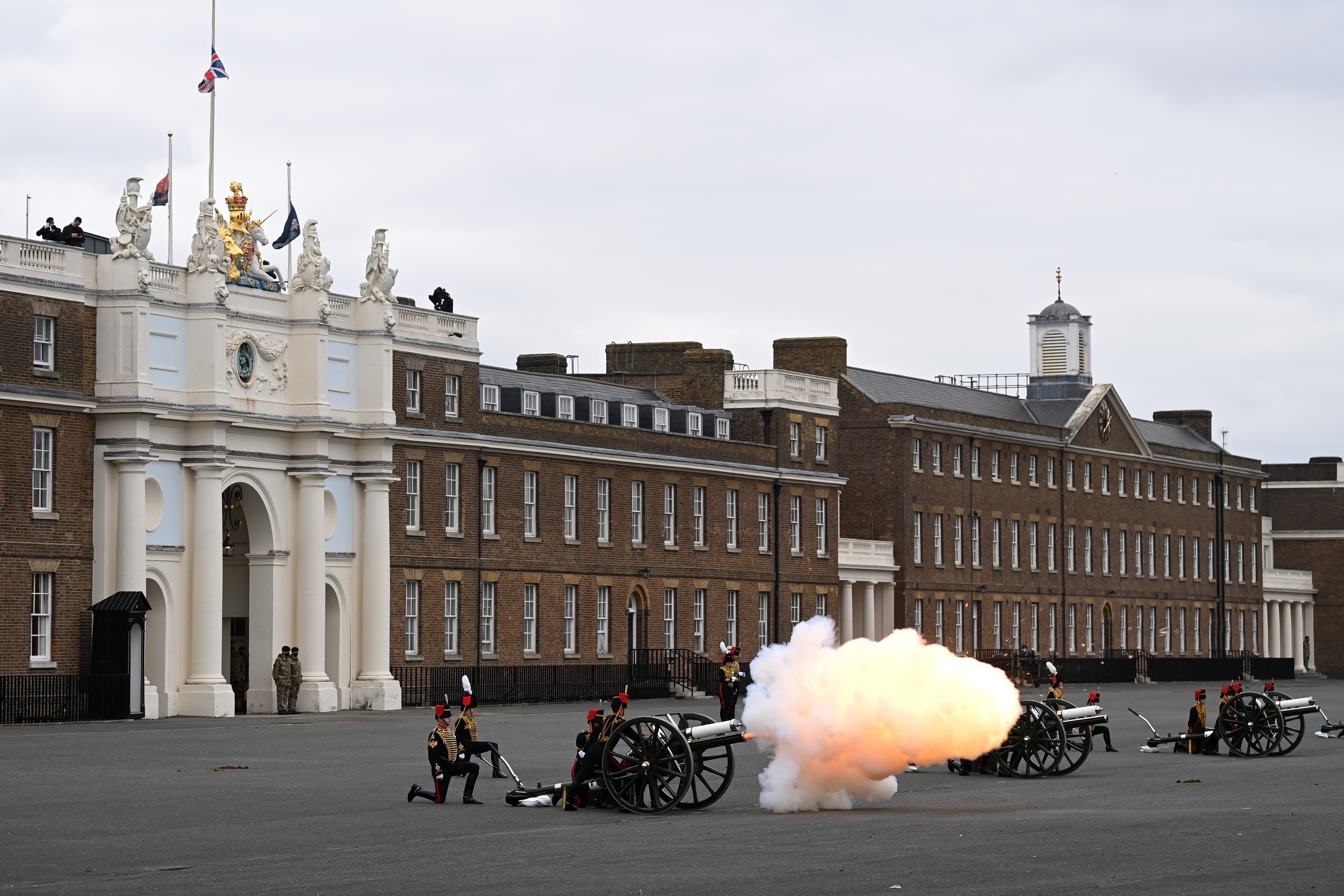 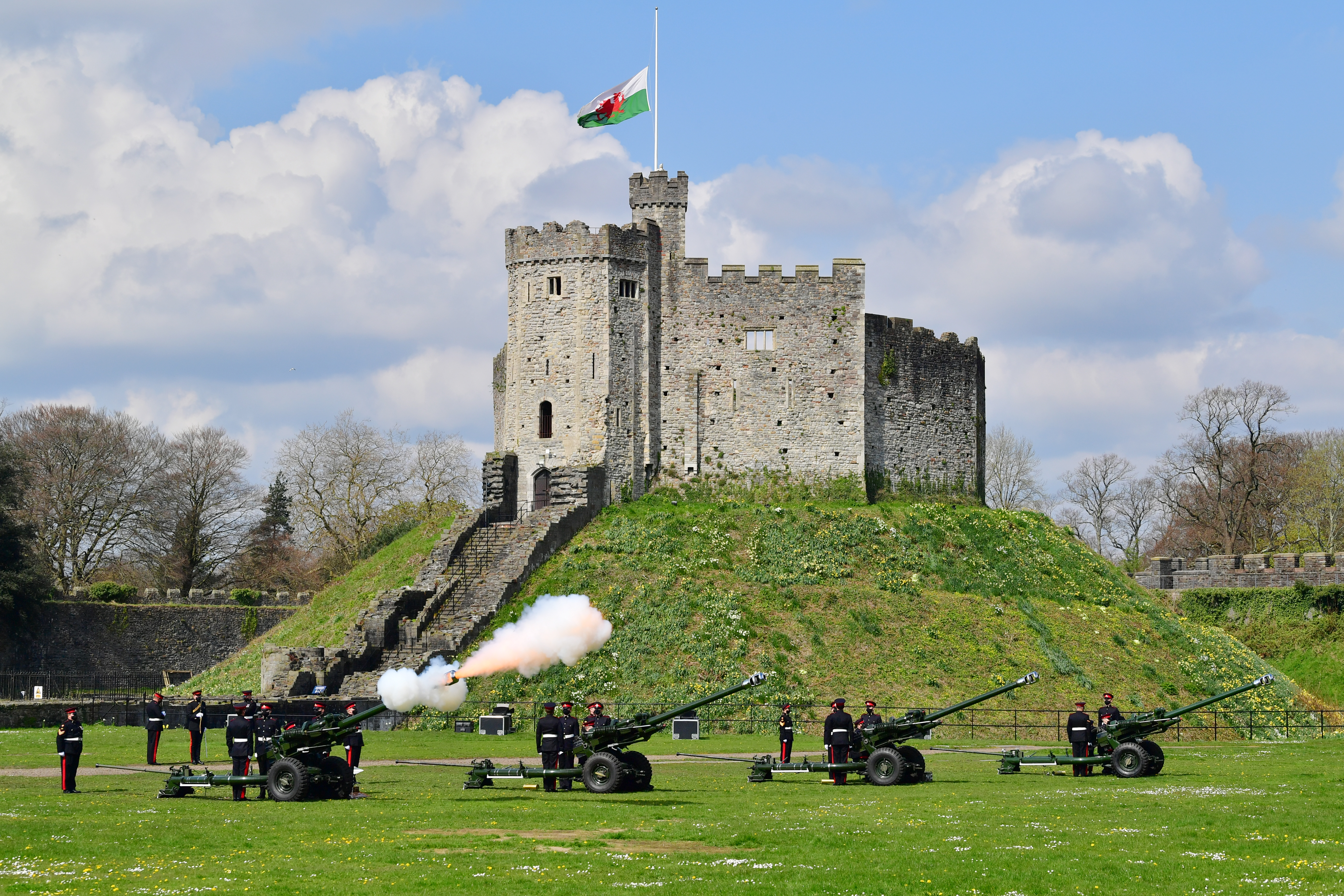 "While there is sadness that the public will not be able to physically be part of events to commemorate the life of the duke, the royal family asks that anyone wishing to express their condolences do so in the safest way possible and not by visiting Windsor or any other royal palaces to pay their respects,'' the palace spokesman said.

"The family's wish is very much that people continue to follow the guidelines to keep themselves and others safe.''

The announcement comes after military teams across the UK and on ships at sea fired 41-gun salutes Saturday to mark the death of Philip, honouring the former naval officer and husband of Queen Elizabeth II whom they considered one of their own.

Batteries in London, Edinburgh, Cardiff and Belfast — the capitals of the four nations that make up the United Kingdom — as well as other cities around the UK and the Mediterranean outpost of Gibraltar fired the volleys at one-minute intervals beginning at midday (9pm AEST).

Ships including the HMS Montrose, a frigate patrolling the Persian Gulf, offered their own salutes. "The Duke of Edinburgh served among us during the Second World War, and he remained devoted to the Royal Navy and the Armed Forces as a whole," Gen. Nick Carter, chief of the defence staff, said in a statement.

"A life well-lived. His Royal Highness leaves us with a legacy of indomitable spirit, steadfastness and an unshakeable sense of duty."

Members of the Commonwealth, a group of 54 countries headed by the monarch, were also invited to honour Philip.

The Australian Defence Force began its salute at 5pm outside Parliament House in Canberra, and New Zealand planned to offer its own tribute on Sunday.

Members of the public continued to honour Philip's life of service on Saturday, leaving flowers outside Buckingham Palace and Windsor Castle despite appeals from authorities and the royal family to refrain from gathering. The Funeral of His Royal Highness The Duke of Edinburgh will take place at St George's Chapel, Windsor on Saturday, 17th April 2021 at 1500hrs. The service will be preceded by a Ceremonial Procession inside the grounds of Windsor Castle.

The Duke of Edinburgh's coffin, covered with His Royal Highness's Personal Standard and dressed with a wreath of flowers, is resting in the Private Chapel at Windsor Castle, where it will remain until the day of the Funeral.

On Saturday 17th April, The Duke of Edinburgh's coffin will be moved by a Bearer Party found by The Queen's Company, 1st Battalion Grenadier Guards. Positioned in the Quadrangle at Windsor Castle will be representative detachments drawn from His Royal Highness's military special relationships.

His Royal Highness's coffin will be carried in a purpose-built Land Rover - which The Duke was involved in the design of - flanked by military Pall Bearers, in a small Ceremonial Procession from the State Entrance to St George's Chapel, for the Funeral Service. Members of the Royal Family and The Duke of Edinburgh's Household will walk behind the coffin from the Quadrangle, down Chapel Hill and into Horseshoe Cloister. The Funeral Service will begin with a National Minute's Silence at 1500hrs.

The Funeral Service will be attended by Her Majesty The Queen and Members of the Royal Family. The coffin, carried by a Bearer Party found by the Royal Marines, will be received at the top of the West Steps of St George's Chapel by the Dean of Windsor and the Archbishop of Canterbury. The Duke of Edinburgh's Naval Cap and Sword will be placed on the coffin ahead of the service and His Royal Highness's Insignia will be laid on the Altar of the Chapel. At the conclusion of the service, His Royal Highness will be interred in the Royal Vault in St George's Chapel.

Union Flags flying at half-mast at Royal Residences will remain at half-mast until the day after the Funeral. It is The Queen's wish that the Royal Family will observe two weeks of Royal Mourning, starting yesterday.

'Queen has been amazing'

Heavy rain and sun brings four seasons in one day