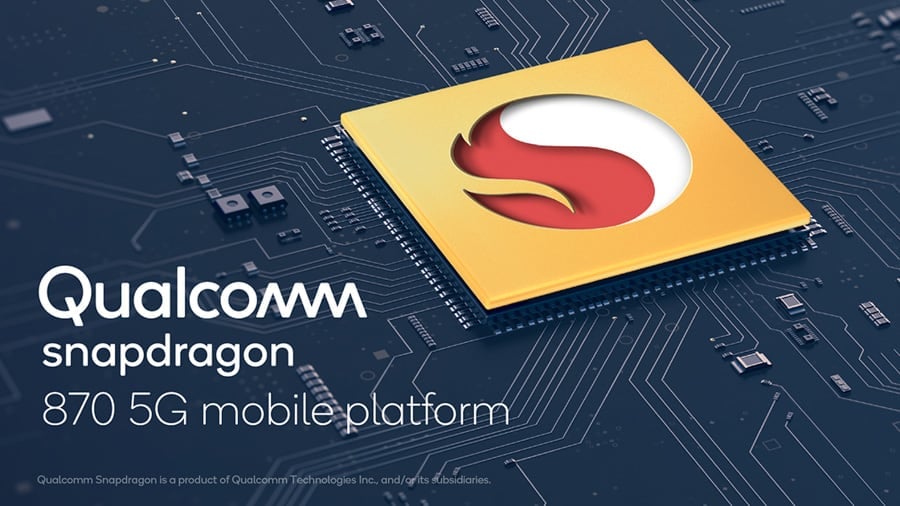 The Qualcomm Snapdragon 870 5G has been announced, which is essentially the same as the Snapdragon 865 Plus.

Qualcomm and TSMC managed to stretch the clock speeds on a 7nm node. With that, the Qualcomm Snapdragon 870 5G has the highest clock speed on a mobile chip at 3.2GHz. Surpassing the second best, the Kirin 9000 of the new Huawei Mate 40 series.

But that doesn’t necessarily mean that the Snapdragon 870 is more powerful than the previously unveiled Snapdragon 888. The new one still uses Kyro 585 cores that are based on ARM Cortex-A77.

On the other hand, the Snapdragon 888 comes from the new ARM Cortex-X1 and Cortex-A78. We still have to wait for benchmark and performance reviews to arrive to gauge which one is better, but we expect the former to take the crown.

As for the GPU, Qualcomm used the same Adreno 650. As of now, it’s still not clear if it has the same 670Mhz speeds or the company was able to up the frequency. Chances are, it was kept the same, as the Hexagon 698 and Tensor Accelerator remains unchanged at 15 TOPS.

But unlike newer chipsets, the Snapdragon 870 doesn’t have an integrated 5G modem. Instead, there’s an external Snapdragon X55 on the inside that offers sub-6 and mmWave support.

The confirmed brands that will carry this new processor are OnePlus, OPPO, Xiaomi, iQOO, and Motorola.

This article, Qualcomm Snapdragon 870 5G announced, has the highest clock speed at 3.2GHz, was originally published at NoypiGeeks | Philippines Technology News, Reviews and How to's.

A Primer on the Gun that Won the West: Winchester 1873