Rami Malek and Kenan Thompson audition for the role of Prince in Jordan Peele's imaginary biopic during a hilarious 'Saturday Night Live' sketch. 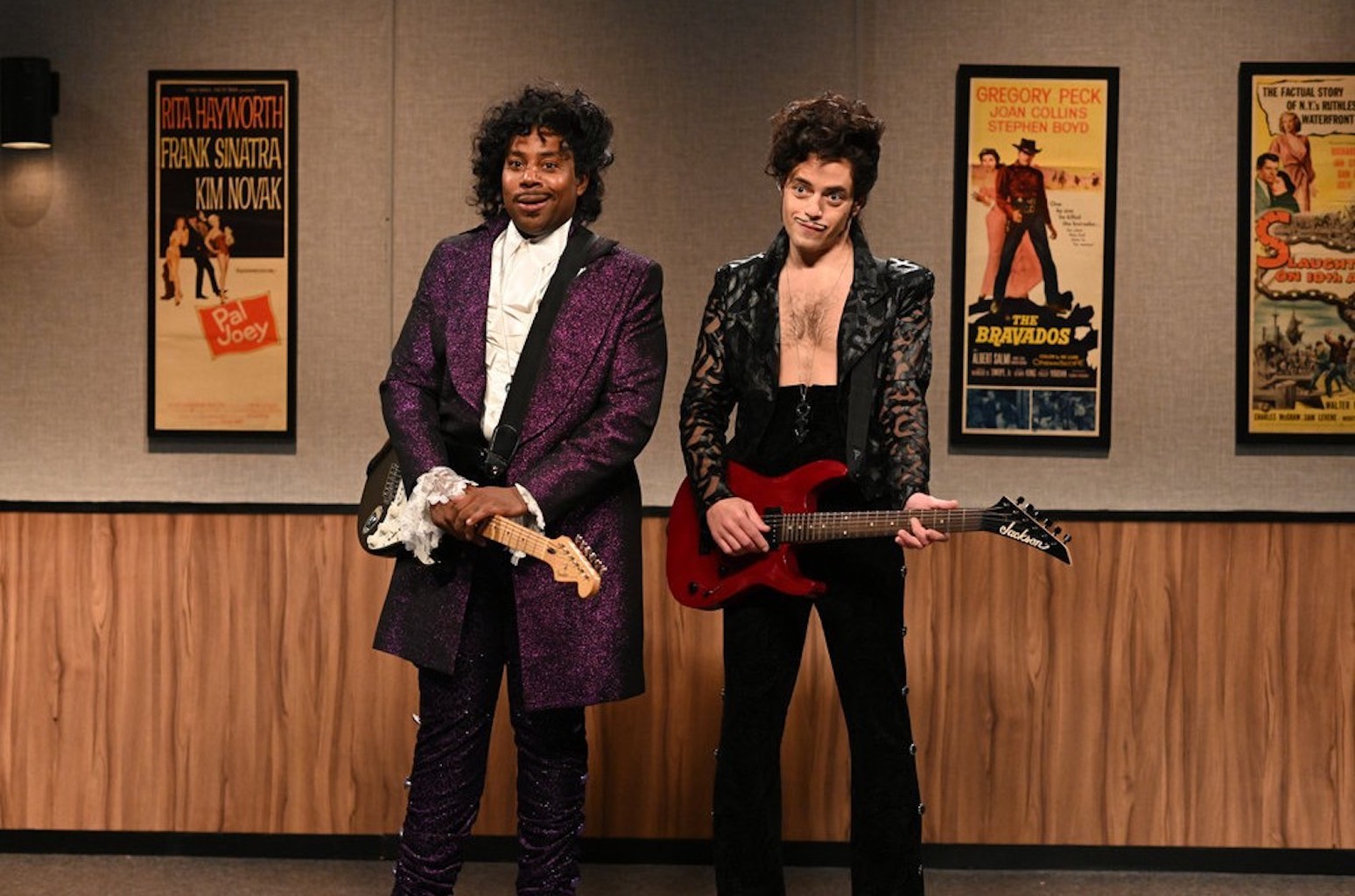 After winning an Oscar for his portrayal of Queen’s Freddie Mercury, Rami Malek is zeroing in on his next musical movie role: Prince.

At least that was the subject of a hilarious Saturday Night Live skit on Oct. 16, in which the 40-year-old Bohemian Rhapsody actor portrayed The Purple One during an audition for director Jordan Peele’s imaginary biopic about the mysterious artist.

“You guys are by far our top two choices to play Prince in my new biopic,” Redd’s Peele tells the actors, who are both comically dressed as Prince. “So the only way to settle this is to have a Prince-off.”

The Get Out director clarifies, “I’ll call out some random scenes from the script and you two will give me your absolute best Prince performance at the same time.”

From there, the casting panel rattles such oddball requests as Prince getting pelted in the legs with a football, Prince stepping on a Lego, and Prince getting a COVID test “but they go up too far.”

Although it’s a tough call, the panel decides that Malek can’t play Prince because he’s not Black. “But my parents are from Egypt and that’s in Africa,” Malek argues. “Doesn’t Prince transcend race?” Redd’s Peele quickly responds, “Not in this movie, no.”

Shortly after Thompson is given the role, British actor and former SNL host Daniel Craig crashes the audition dressed as a medieval prince and ends up nabbing the part because he’s James Bond.

See SNL’s “Prince Auditions” skit below, and watch the full episode of SNL on Hulu here. The streaming service is currently offering a 30-day free trial, which you can sign up for here.

Drake’s ‘Certified Lover Boy’ Bounces Back to No. 1 on Billboard 200 Chart

Young Thug was joined by Travis Barker, Nate Ruess and Gunna during his 'Saturday Night Live' debut on Oct. 16. 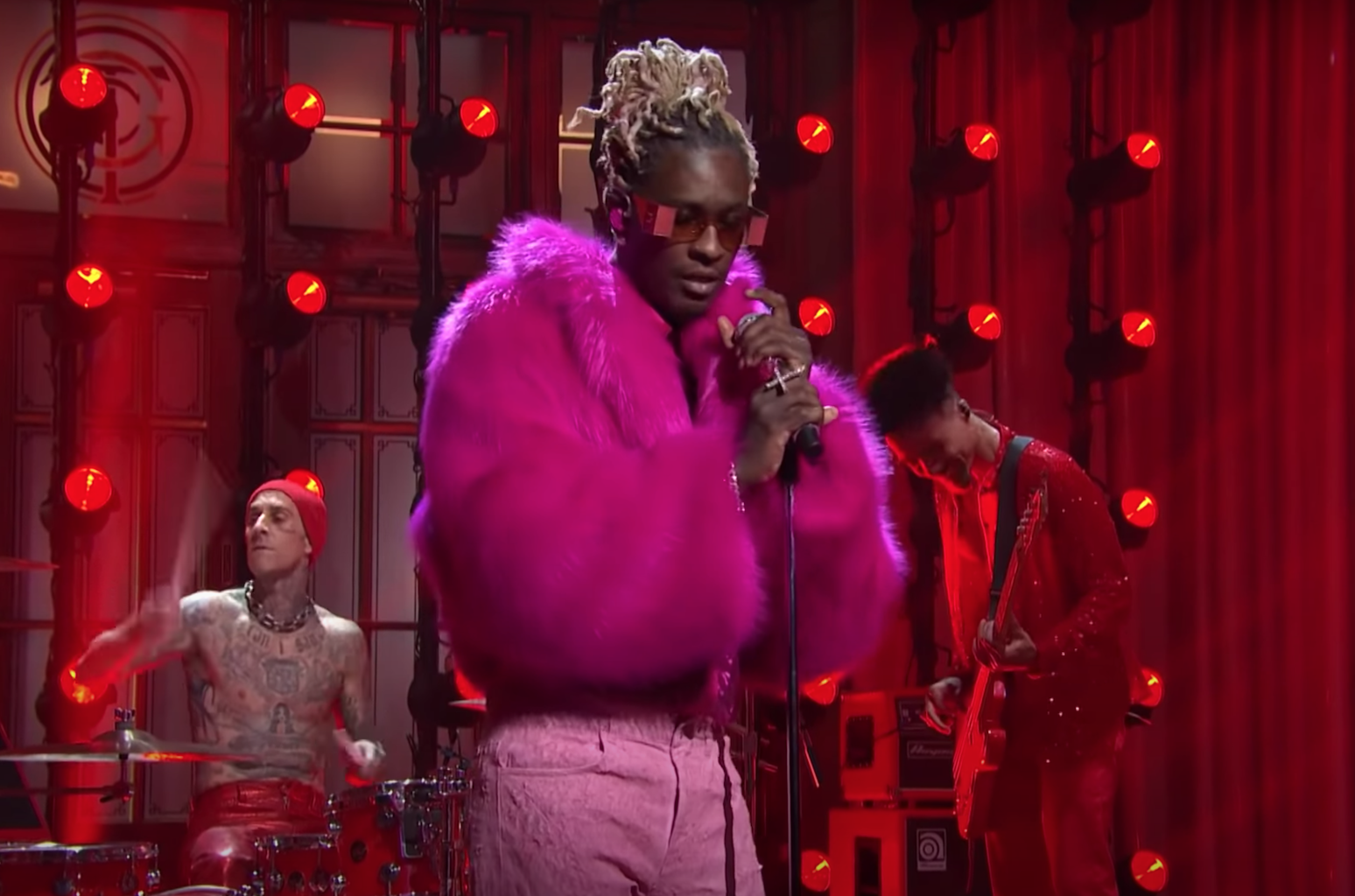 Young Thug made his Saturday Night Live debut on Oct. 16 with a little help from his friends.

For his first time as musical guest on the long-running NBC sketch comedy show, the 30-year-old Atlanta rapper brought out Blink-182 drummer Travis Barker for assistance on his amped-up track “Tick Tock.” Backed by a high-energy guitarist and bass player, Thugger rocked a fuzzy pink-and-black tiger print jacket while a shirtless Barker held down the beats in a pink beanie.

Over the summer, Barker backed YT during the rapper’s NPR “Tiny Desk” concert. The drummer closed out the show with an impressive solo on “Ski.”

For his second song, Young Thug slowed things down with a moving performance of “Love You More,” from his just-released second album, Punk. In addition to Barker, the rapper was also joined by Fun. singer Nate Ruess and fellow hip-hop artist Gunna. Keeping the pink color theme intact, Thugger donned a puffy pink fur coat with a lighter shade of pants to match.

See Young Thug’s SNL performances below, and watch the full episode on Hulu here. The streaming service is currently offering a 30-day free trial, which you can sign up for here.

Maya Jane Coles Returns To Club Focus With 'Would You Kill...