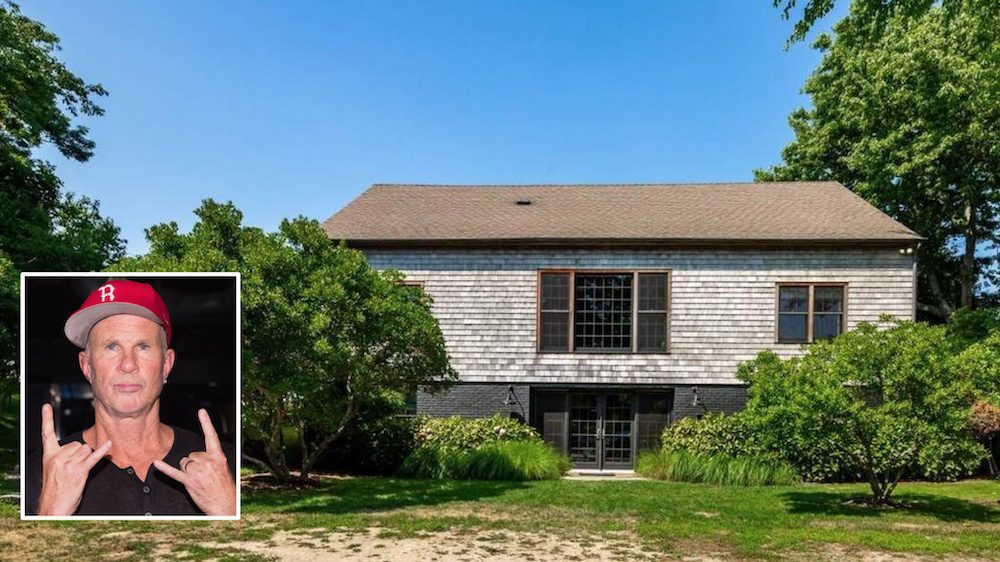 The longtime drummer of the Red Hot Chili Peppers, Chad Smith, is making moves in the Hamptons. He’s listed his “private waterfront oasis” in Montauk, NY, for $15 million.

Smith’s sumptuous, gated property spans 4 acres and two lots overlooking Fort Pond Bay. Perched on a bluff, it offers amazing views, and the listing details claim that the spread is “reminiscent of the Cote d’Azur.”

While it’s not France, the location does offer easy beach access and vistas of sailboats bobbing along in the Bay. The offering includes 259 feet of sandy beachfront, with plenty of room for canoes, kayaks, paddleboats, or a large watercraft.

The main house offers five bedrooms, 5.5 baths, and 4,750 square feet of living space. It features an open floor plan with a great room that seamlessly transitions into the dining and living rooms. A well-appointed chef’s kitchen offers spectacular bay views, along with ample space for cooking.

The master suite and a guest bedroom are both located on the first floor. On the lower level are three additional bedrooms and bathrooms, with a spacious living area.

The upper level is an open bonus room that can be used for a multitude of purposes.

The two-bedroom, two-bathroom cottage could also easily be used as an office. The petite two-level structure has its own entrance, as well as a kitchenette.

Besides the bay and beach, there’s also a heated saltwater pool in the backyard. A pergola by the pool is a perfect spot to spend summer days.

The property is luxuriously landscaped and surrounded by old trees and rolling lawns, and has an organic garden designed by . Other notable outdoor features are a dining area, fire pit, and film screening area. Kids will enjoy the zip line and playground.

The property’s location is also a major plus, with galleries, shopping, and restaurants all close by.

Smith and his wife, Nancy, also own a five-bedroom home in Malibu that overlooks the Pacific Ocean. They paid $8.6 million in 2006 for their West Coast digs.

Smith, 58, joined the Red Hot Chili Peppers in 1988, just as the band began to break into the mainstream.

In 2012, the band was inducted into the Rock & Roll Hall of Fame. Smith is also well-known for his resemblance to the actor Will Ferrell—Smith has even worn T-shirts saying “I Am Not Will Ferrell” during live performances.

Jennifer Landey with Sotheby’s International Realty-Bridgehampton Brokerage has the listing.

Looking for a Home in the Suburbs? Good Luck, So Is Everyone Else

The Number of Americans Skipping Mortgage Payments Drops to Lowest Level Since April—but...