New studies suggest the drug remdesivir not only speeds recovery of COVID-19 patients in the hospital, but lowers their risk of death from the virus. 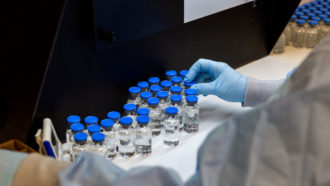 Six weeks ago, researchers announced data on the first drug that appears to block the new coronavirus. Called remdesivir (Rem-DESS-ih-veer), this drug sped up the recovery of hospitalized COVID-19 patients. New data released by the drug’s maker now suggest this antiviral drug may also cut a patient’s chance of dying from COVID-19.

Among severely sick people, the drug cut the risk of dying by 62 percent. That was when compared to the standard care being offered COVID-19 patients. Gilead Sciences Inc. of Foster City, Calif., reported its data at a virtual scientific conference on July 10.

In a previous human trial, the drug shortened hospital stays by about four days. That earlier trial also showed a trend toward lower death rates. But there were too few data back then to confirm, mathematically, that the trend would hold up.

The new improvement in COVID-19 survival comes from two much bigger studies. One was aimed at measuring how well the drug works. It assigned 312 patients to get either the drug or standard care. The second looked over previously collected data for signs of the drug’s impact in 818 people with COVID-19.

Among hospitalized people getting remdesivir, these data showed that 7.4 percent died within two weeks of starting treatment. The death rate for those not taking the drug was 12.5 percent. These data, together with a third new study — this one in mice and human cells — offer mounting evidence that this drug can help fight COVID-19.

Gilead found that roughly three in every four people taking remdesivir recovered by day 14. Compared to those getting standard care, this was at least 15 more people in every 100 patients.

Explainer: What is a clinical trial?

The company also reported data on remdesivir given for “compassionate use” to children and pregnant women. Compassionate treatments are those offered when nothing else is available and the people do not qualify to join a clinical trial. Of 77 children getting the drug, almost three in every four (56 kids), were released from the hospital by day 28. More than one in every eight remained hospitalized but breathing on their own; they didn’t need extra oxygen. Still, one in every 25 died. Among 86 infected women, the drug helped lessen the amount of extra oxygen needed in almost all (96 percent) of pregnant women and in most of the rest (89 percent) who had newly given birth.

A third new showed direct evidence for the first time that the drug halts the reproduction of the SARS-CoV-2. It’s the virus that causes COVID-19.

Explainer: What is a coronavirus?

Researchers had tested remdesivir against other coronaviruses that infect bats or people and shown that the drug could inhibit growth of those viruses. “But we hadn’t actually shown that it was active against SARS-CoV-2,” notes Andrea Pruijssers. She’s a virologist. She works at Vanderbilt University Medical Center in Nashville, Tenn.

For the new trial, her team grew SARS-CoV-2 in human lung cells and in monkey kidney cells. Remdesivir worked better in the lung cells. Those cells were better at converting the drug to an active form, her team reports in the July 7 Cell Reports. And that’s good news. Such lung cells are among those damaged most by the virus.

The researchers also infected lab mice with a hybrid version of the original SARS coronavirus. Researchers had previously adapted the SARS virus to grow in mice. Now they replaced an enzyme the virus needs to reproduce with a version from SARS-CoV-2. (They used this hybrid because SARS-CoV-2 will not typically infect lab mice.)

Each lung has more than one section, or lobe. (In people, the right lung has three lobes; the left lung has two.) Mice treated with the drug ended up with about 100 viruses in each lobe of the lung. Those that didn’t get the drug had thousands to millions of viruses in their lungs, the team found. In addition, Pruijssers notes, lung function improved in mice getting the drug.

Usually such lab data would be needed before scientists tested a drug in people. But because the coronavirus already has killed so many, researchers started testing the drug right away in COVID-19 patients.

Other drugs also jumped into clinical trials with no lab evidence to back up their use against a new virus. That did not always work so well. And some drugs had lab data hinting that they could stop the coronavirus, but then did not perform well when tested in people. But the new remdesivir data are encouraging in both the lab and in people. That suggests this drug could be helpful against COVID-19, Pruijssers says.

Currently, remdesivir is used only in hospital patients. In part that’s because it must be infused into the blood. And that’s something best done by medical professionals. But many researchers think that giving the drug earlier in an infection would be better. Gilead announced July 8 that it soon would begin a clinical trial to test an inhaled form of the drug. If it is safe and works well, it might be used to treat people at home. The company also announced it would begin testing the original form of the drug in children.

How to find the next pandemic virus before it finds us

How Did The Universe Make Our Existence Possible?

Tracing the Past Through Layers of Sediment