Rick And Morty: The Worst Things Morty Has Done To The Family So Far, Ranked

It's not just Rick who has brought chaos to the family, thanks to his influence Morty is racking up the bad deeds as well. 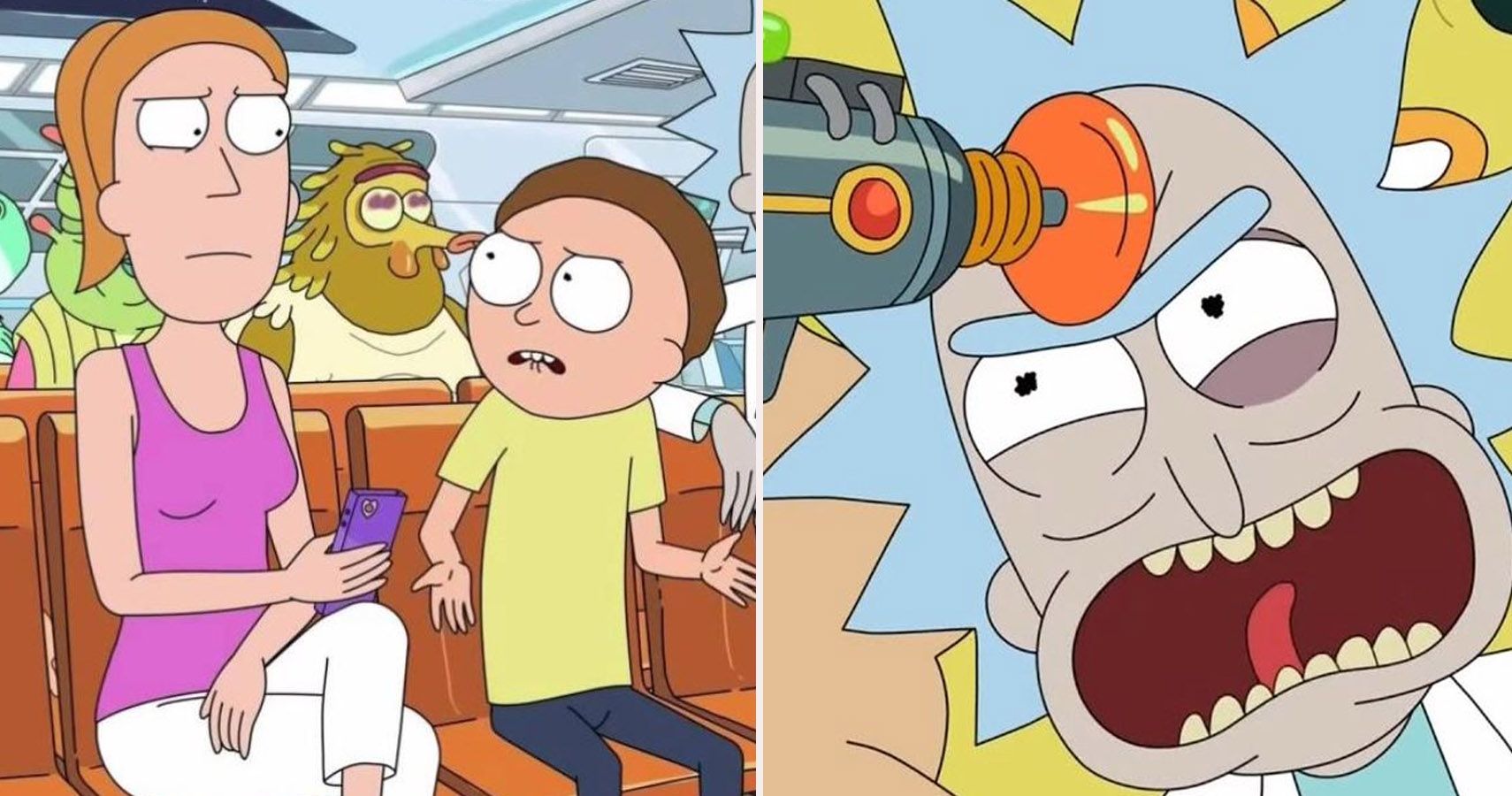 When you're a 14-year-old boy with a fragile and malleable mind and your diabolically smart grandfather usually brings you along on adventures full of murder, conspiracy and more, some of that evil stuff is bound to rub off on you. Such is the case for Morty Smith who has been spending way too much time with Rick and it has changed him.

RELATED: Rick And Morty: 10 Jokes That Everyone Completely Missed

As such, it's not just Rick who has done some pretty bad things to the whole Smith/Sanchez family, Morty also has his fair share of evil deeds. They range from the trivial to reality-breaking, all because of Morty's bad decisions and selfishness. So if you're not convinced that bad influence grandpas and extradimensional adventures can turn a person evil, here are 50 of Morty's deeds that say otherwise.

Updated May 11th, 2020 by George Chrysostomou: The new season of the show is upon us so it makes perfect sense to look at a few more of the terrible things that Morty has done to his own family!

Morty is often seen as being pretty dangerous to his family in terms of Summer, Gerry, and Beth. However, he's also done a few things that have even put Rick in danger.

After buying the storyline train in one of the most recent episodes of the show, Morty puts versions of both himself and his grandfather on this never-ending vehicle which is packed with threats and dangers that are directly aimed at them. In the real world, this also meant that the train derailed meaning Rick was without a present.

In Morty's Mind Blowers both Rick and Morty realize that they have been erasing their own memories for years. This means that Morty is erasing memories of his family which is bad enough by itself. What's worse is they have put Summer in a position where she has to fix it.

What's more, some of the memories that were unveiled were pretty dark. For instance, it seems that Morty might have endangered another planet after realizing that the squirrels controlled everything.

13 SHOWED SUMMER MORE THAN SHE EVER WANTED TO SEE

Morty sort of hinted that he frequently pleasures himself everywhere but we've only seen him caught in the act during a flashback in the "Total Rickall" episode. It was Summer's flashback and she had to recall some pretty bad memories she had with Morty to confirm that he wasn't a parasite who steals lives and families.

As it is, Summer's worst memory with Morty involved him being caught in a compromising position in the kitchen. To add insult to injury, Morty even screamed back at Summer that he was thinking about one of her friends at the time.

Morty doesn't always get to bring back many souvenirs from his space, time, and dimension escapades with Rick but when he did, it wasn't exactly family-friendly. During the episode "Raising Gazorpazorp," Morty saw a robot sex doll unlike anything Earth has right now, so he asked his grandfather to buy it for him.

As soon as they get home, Morty did some pretty nasty things and inadvertently let his whole family know... mostly during their dinner. For some reason, Morty's room didn't have any sound-proofing, nor was the floor sturdy enough. As a result, everyone in the house found out more than they wanted to know.

11 EXPOSED THE FAMILY TO MORE RICK

Unfortunately for his family, Morty seems to enjoy the adventures that he goes on with Rick. This has resulted in him becoming more and more like his grandfather in both his attitude and his actions.

He is far crueler to his dad and Summer and has created a number of situations due to his adventurous ambition that could have cost the family their lives. The more he becomes like Rick the more damage he could do to them all.

It turns out Morty Smith wasn't the latest member of the Smith family, that title belongs to Morty Smith Jr... Morty's son with the robot he brought home. Who'd have thought that it was a utopian device from Gazorpazorp? Anyway, Morty Jr. proved to be quite a troublesome child. Apart from growing up way too fast, he was literally bred to be incredibly violent.

Hence, Morty had to invent ways to keep Morty Jr. inside the house at all times so that he won't hurt anyone, this included lying to him and grounding him for pretty much most of his childhood. This didn't end well and Morty Jr. ended up becoming Morty's estranged son due to bad parenting.

Despite trying his best to do a good deed, Morty's interference into an alien race of snakes resulted in him creating a time travel situation which clearly parodied the science fiction classic, The Terminator.

These snakes came back to Morty's house and tried to kill him and his family in order to prevent him from changing their history. This was an incredibly violent situation that he created; he never considered the consequences of his actions.

This one isn't particularly just Morty's fault, Rick was also partly to blame. During the episode "Rick Potion," Morty asked his grandfather to make someone fall in love with him, specifically Jessica, Morty's longtime high school crush. Rick obliged and made a potion which was somewhat successful... until it turned into a virus that made everyone else love Morty.

RELATED: Rick And Morty: 10 Times The Show Broke Our Hearts

Rick tried to fix it on Morty's behest and the two of them ended up turning everyone into a grotesque amalgam of different creatures, basically "Cronenberg-ing" as a reference to the director David Cronenberg and his body of horror films. This turned their whole reality into an uninhabitable apocalyptic wasteland, all thanks to Morty's infatuation with Jessica.

7 LIED ABOUT BEING THE REAL MORTY IN ANOTHER REALITY

Of course, it was up to Rick to "fix" things after the Cronenberg incident. So, he looked up a reality where both he and Morty died so they could replace their dead alternate reality versions. Morty was reluctant at first but didn't really have any choice; it was either that or his original Cronenberg reality.

Eventually, Morty ended up telling Summer that he's not the original Morty and that his twin is actually dead but somehow didn't tell his parents about it. Does it matter? Probably not to his parents; they're too busy progressing into a divorce to actually mind that their original son is now dead.

Most of the time, Morty loves Summer ever since he told her the truth about being a fake Morty. However, this doesn't stop Morty from occasionally throwing some abrasive insults at Summer, especially when Rick initiates the insult tirade.

RELATED: Every Crazy Dimension on Rick and Morty, Ranked

This is most noticeable during "Morty's Mind Blowers" where both Rick and Morty's lives were saved by Summer. After waking up without any memory of what the two have done, Rick suddenly started insulting Summer and throwing some offensive derogatory words at her. Morty soon followed for some reason and without question.

The eye-patch wearing Evil Morty already has quite a lot to answer for. Fans have no idea what this version of the character did to his family, but it's already known that he is seeking some kind of revenge on his grandfather.

The mere creation of Evil Morty must mean that he does some horrible things to his timeline and his family. It's not further up this list because it's unclear what he did to Summer, Beth, and Gerry; although he's killed off many different Ricks at the Citadel.

4 PUT HIS FAMILY (AND EVERYONE) IN DANGER FOR JESSICA

During the episode "Edge of Tomorty: Rick Die Rickpeat," Morty went full evil and we're not talking about any other version of Morty here, this one's the real Morty we've been following since the start of the show. Morty got a taste of a special crystal that showed him how he will die and one of those possibilities was him dying old with Jessica, naturally, he did what he could to fulfill that future.

That was easier said than done since it led to Morty practically turning into a sci-fi monster who killed police, tried to kill Rick, and eventually would have endangered everyone on the planet altogether, including his family. It really goes to show how dangerous Morty's crush on Jessica can be.

3 RUINED THEIR REALITY BY BEING UNCERTAIN

To be honest, this one's not entirely Morty's fault, it's also Summer's. The two of them got a little too heated up during an after-party cleanup in the episode "A Rickle in Time" and started fighting. Due to their uncertainty with each other and the unstable reality frozen in time, they ended up splitting their realities apart, essentially making it disappear entirely and exist in a hypothetical plane.

RELATED: Rick And Morty: The 10 Best Episodes So Far (According To IMDb)

It's best not to delve into the pseudo-science of that episode too much, even the showrunners nearly "broke" themselves coming up with it. In any case, further uncertain arguments and actions from Morty led to more time fractures which nearly erased their reality from existence if not for Rick's quick thinking.

While Morty became more open to killing his grandfather in the fourth season of the show, that murderous intent actually began way before, specifically during the episode "Rickshank Redemption" in season 3. During their assault against the Galactic Federation, Rick, Summer, and Morty came to a standoff with another Rick from the Council of Ricks. The other Rick was holding Summer hostage.

Finally, after several failed attempts at consciously, casually, and apologetically trying to kill Rick out of spite, Morty actually succeeded by accident. During the "Edge of Tomorty: Rick Die Rickpeat" episode again, Rick found out that Morty had smuggled a special crystal which made him see his manner of death.

Morty was following the crystal's "instructions" so that his death would be favorable to him that this made his driving erratic until their ship crashed, throwing through the windshield and impaling him on a sharp rock. Rick died at Morty's hands in a rather unceremonial fashion, not that he would mind since he could resurrect infinitely anyway.

NEXT: Rick And Morty: The Worst Things Rick Has Done To Morty So Far, Ranked

The 10 Best Dinosaurs In The Jurassic Park Franchise, Ranked