The first Rolex Air-King watch was presented in 1945 to honor the British Royal Air Force (RAF) pilots during WWII. However, the Air-King did not become its own standalone collection until 1958 with the launch of the reference 5500. The Rolex Air-King is a model that has enjoyed a long history with many different models […] The post Rolex Air-King Reference 114234 Ultimate Buying Guide appeared first on Bob's Watches. 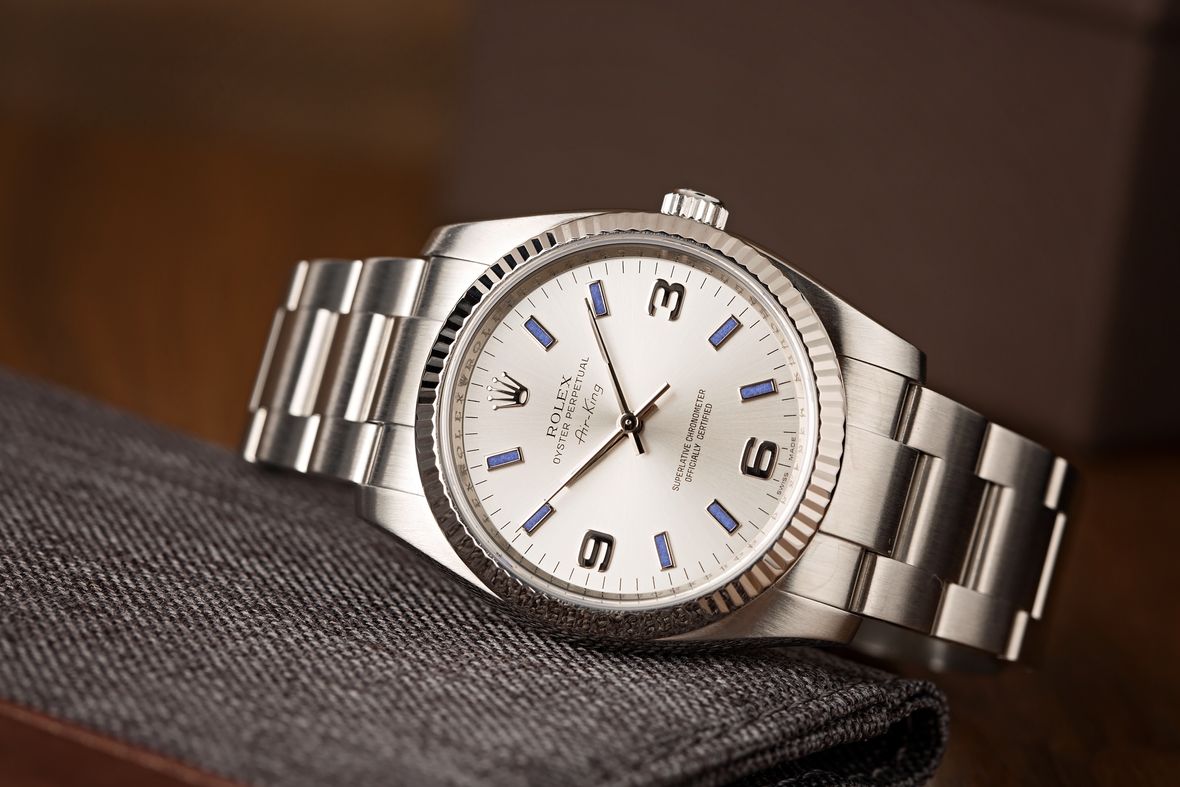 The first Rolex Air-King watch was presented in 1945 to honor the British Royal Air Force (RAF) pilots during WWII. However, the Air-King did not become its own standalone collection until 1958 with the launch of the reference 5500. The Rolex Air-King is a model that has enjoyed a long history with many different models released over the years and as such, it is one of Rolex’s oldest collections that is still in production today.

Although it didn’t have the longest run in the Rolex lineup, the reference 114234 is easily one of the more unusual models from the collection’s back-catalog. Here are seven surprising facts about the discontinued Rolex Air-King ref. 114234 that you may not know. 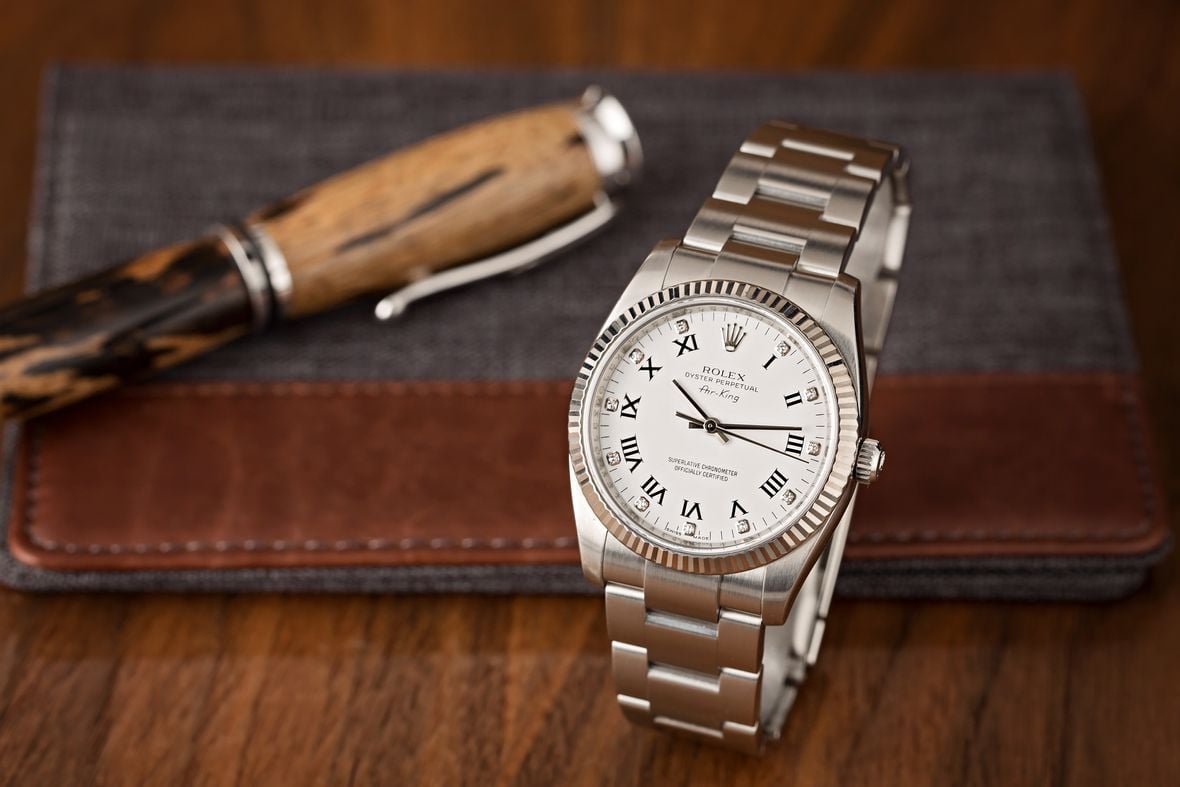 At Baselworld 2007, Rolex unveiled three new Air-King models: ref. 114200, ref. 114210, and the ref. 114234. Therefore, these six-digit models replaced the preceding 14000 series, and although they retained the same 34mm size, the cases featured thicker lugs and the overall look was slightly bulkier.

Although it wasn’t apparent at the time, these new releases were something of a crossover between the old, more elegant Air-King and the modern Air-King that still resides in the current collection. However, the reference 114234 brought us some very exciting dial configurations, many of which remain quite distinct from Rolex watches released either before or since. 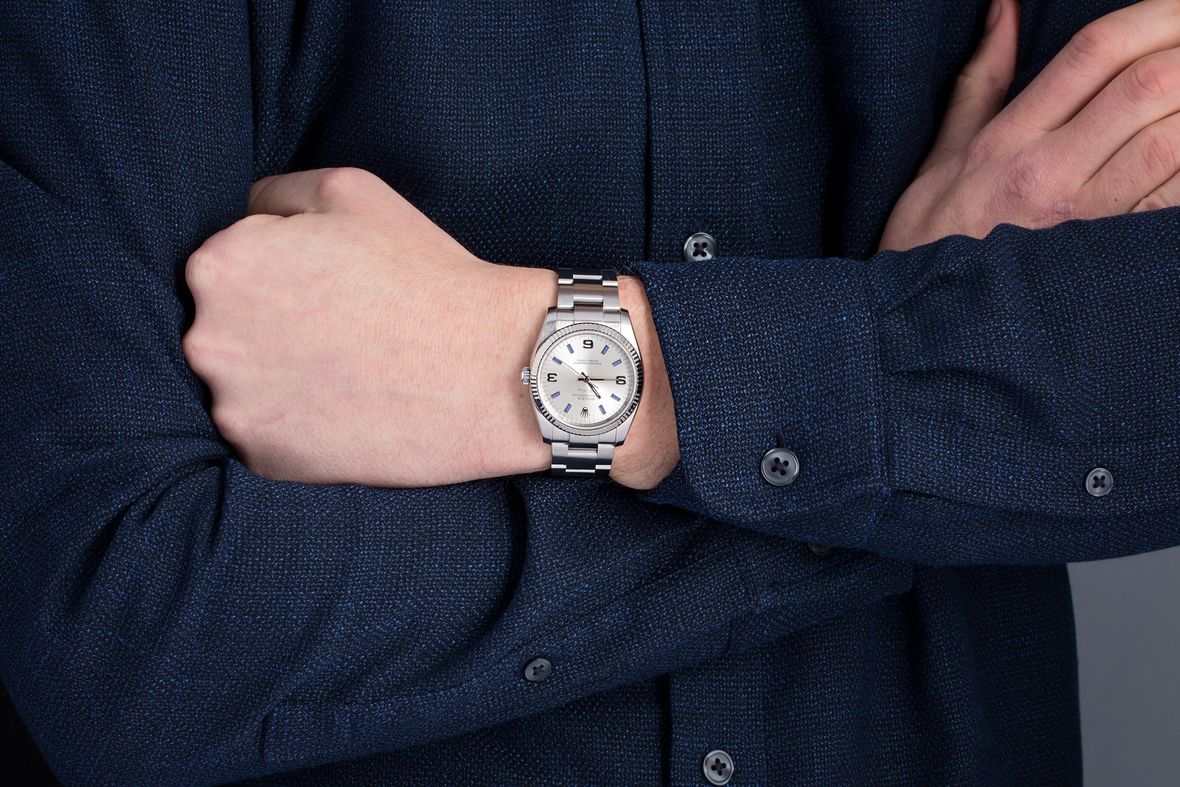 2. The Air-King 114234 Features Some of Rolex’s Most Ambitious Dial Designs

Historically, the Rolex Air-King was only offered with a relatively limited range of classic dial options, but the 6-digit series ushered in a new generation of unusual and colorful dial designs. Joining the traditional options were blue, black, and white dials with printed Roman numerals and “doorstop” style indexes. Additionally this generation also offered a dial with a baton/Arabic design that looks far more similar to an unusually colored version of the Rolex Explorer than anything that remains in the AIr-King family today.

Perhaps the most adventurous reference 114234 dial was the full-Arabic configuration that featured bright orange numerals that are edged in either black or white and joined on the dial by the applied and polished “6” numeral, opposite the Rolex coronet at 12 o’clock, both of which are crafted from solid 18k white gold. Furthermore, it boasts an unusual ring of text that contains its obligatory “Oyster Perpetual” and “Superlative Chronometer Officially Certified” markings. 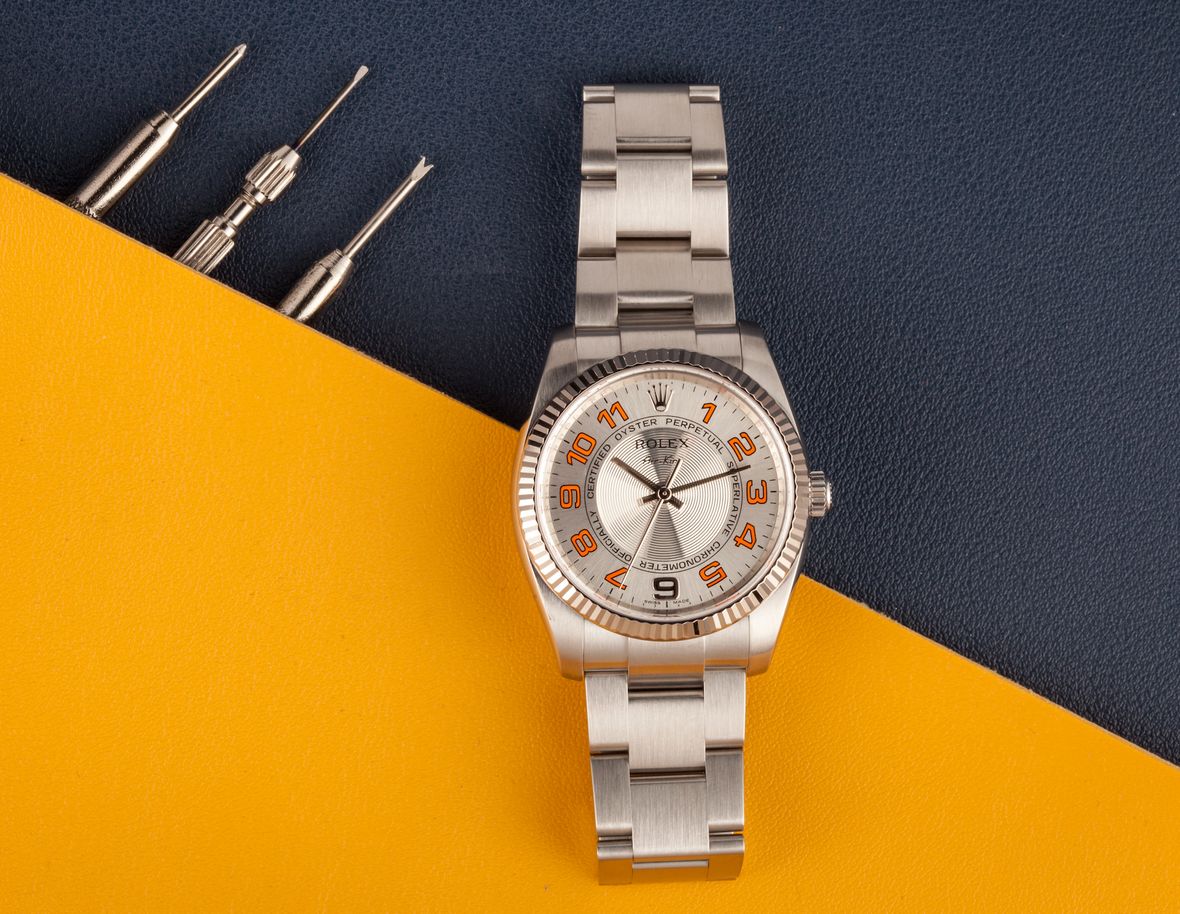 Interestingly, the reference 114234 can be considered a thoroughly modern Rolex as it includes the engraved rehaut as an anti-counterfeit measure. Soon after the millennium, Rolex began engraving its rehauts with “ROLEX ROLEX ROLEX” and the serial number of the watch (found at 6 o’clock). When this engraving was introduced can vary from one model to the next.

The first such family to receive the engraved rehaut ring (the often-slanted ring of metal between the sapphire and the dial) was the now-defunct Turn-O-Graph model around 2004 (the white gold Daytona released at Baselworld 2004 also received this engraving at that time, but the steel model would not get the same treatment until 2007).

Following the Turn-O-Graph, the Rolex GMT-Master II received the engraved rehaut from 2005 onwards. Later in 2007, Rolex updated the remaining models to include the engraved rehaut, which means that this generation of the Air-King was among the very first to be marked in this fashion. While this addition was controversial, it has become so associated with the brand in recent years that it would now be strange to see a Rolex watch without it. As such, these Air-King 114234 watches are some of the oldest “new” Rolex models available. 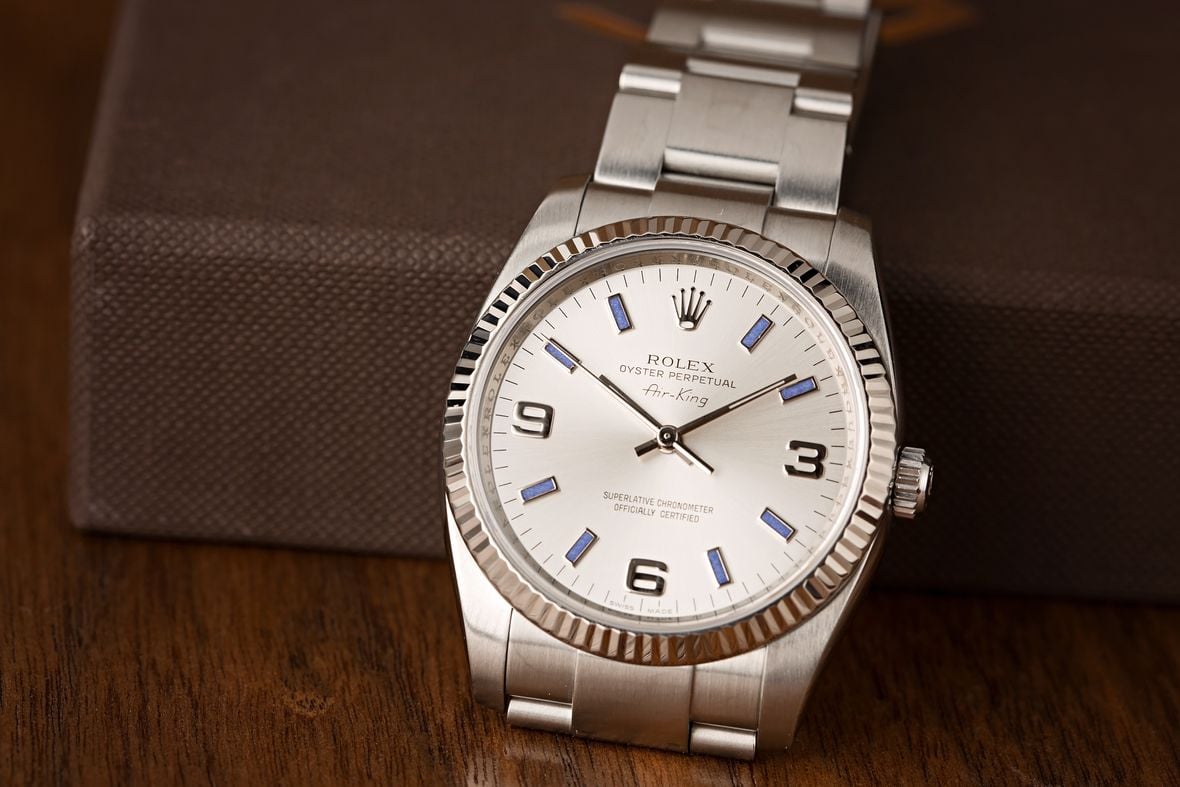 4. The Reference 114234 Was The Last Of The Discontinued 34mm Air-King Family

However, the new Air-King is completely different from its predecessors. It is larger at 40mm, has a completely revamped dial design, a new caliber, and an antimagnetic shield over its movement (among other subtle differences). We’ve seen model revivals and redesigns both before and since from Rolex. The Milgauss is another such example that is far removed from the design of its original inspiration.

While progress is exciting and something to be encouraged, there is an undeniable charm to the models that did not live long in the catalog. As such, models such as this generation of the older 34mm Rolex Air-King are becoming increasingly popular. Many watch lovers eager to add a Rolex to their collections but they are unable to source the latest models, and thus mine the archives for something equally as exciting. The odd-ball reference 114234 is the perfect sleeper pick for someone looking to add a splash of character to their collection. 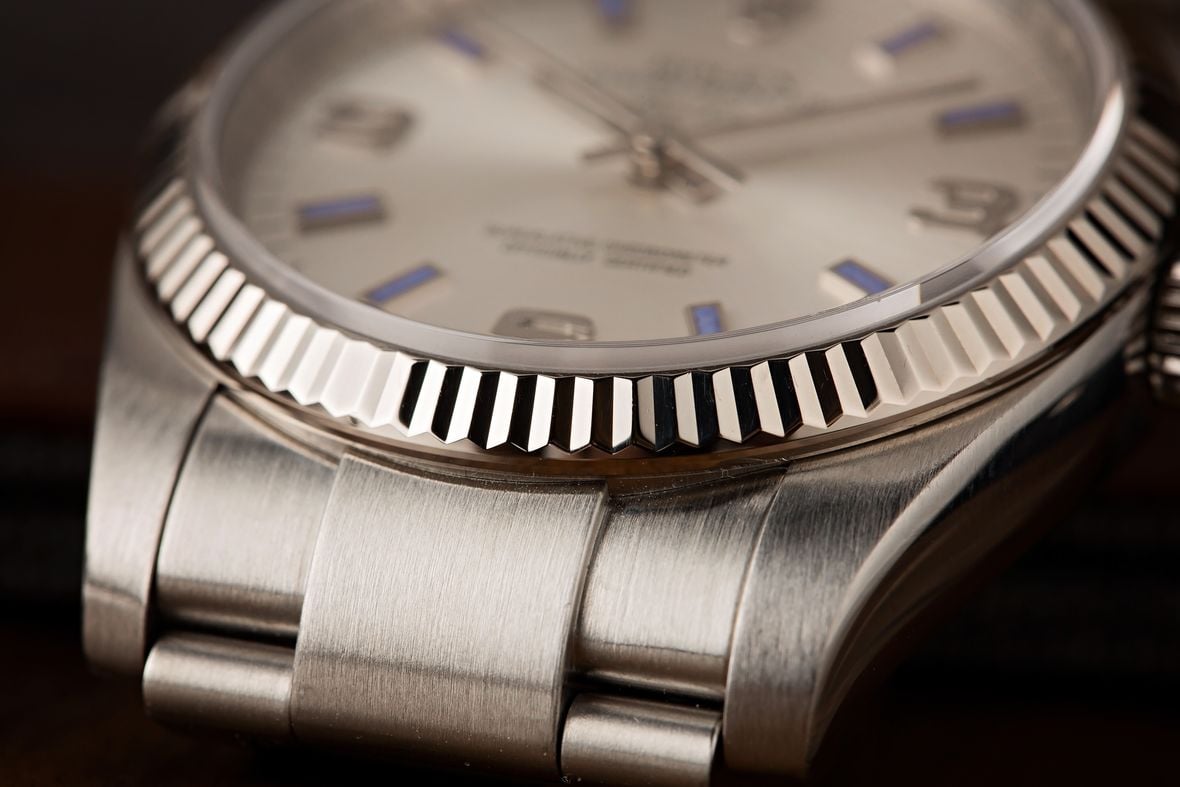 The Rolex Air-King family has always been something of a budget alternative to the other, more famous lines such as the Oyster Perpetual, Datejust, Day-Date, Explorer, and (of course) the Submariner. However, this particular reference from the discontinued Air-King generation received a shot of luxury right in the arm with an 18k white gold fluted bezel.

The Rolex Air-King ref. 114234 is a two-tone Rolesor model crafted in stainless steel and white gold. The stainless steel Oyster case of this Air-King is topped with a fluted 18k white gold bezel. Rolex fluted bezels are only ever crafted from solid gold and the precious metal with its ornate design adds a dressier touch to this particular Air-King. Furthermore, since this is the only Rolex Air-King with a white gold bezel, it’s a truly unique Air-King family member and a worthwhile addition to any collection. 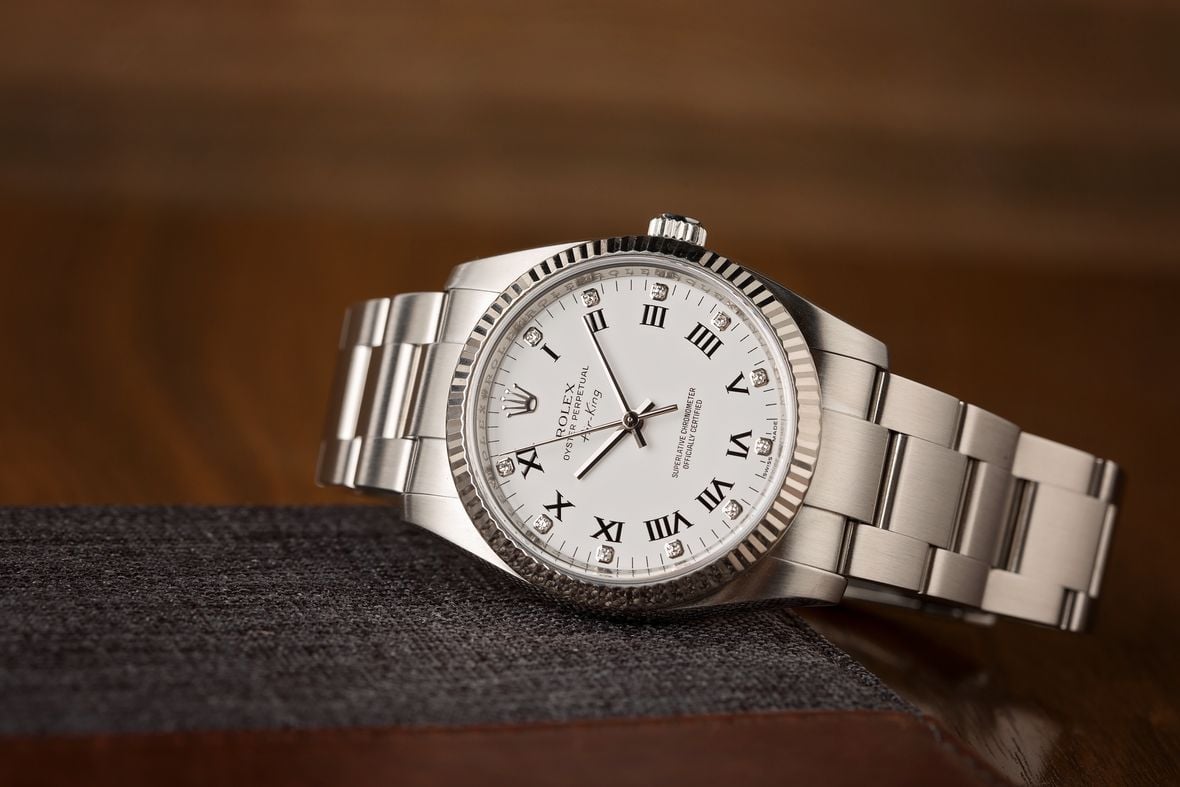 When launched in 2007, all of the then-new Air-King 1142xx series models were officially COSC-certified, separating them from all previous Rolex Air-King watches. Powering the ref. 114234 is the same in-house Rolex Caliber 3130 automatic mechanical movement from the previous ref. 14000M, but this time it was chronometer-rated and thus has the “Superlative Chronometer Officially Certified” label placed prominently on the dial.

As mentioned, the reference 114234 was so proud of this fact, the information can be found located either between the center and the 6 o’clock marker as one would expect, or prominently displayed in a circle right in the middle of the dial. The eye-catching concentric design was available with both silver and blue backgrounds. While the silver dial is comparatively calm, the blue dial, along with those vivid orange numerals, is one of the loudest and most unforgettable Rolex designs of the past 20 years. 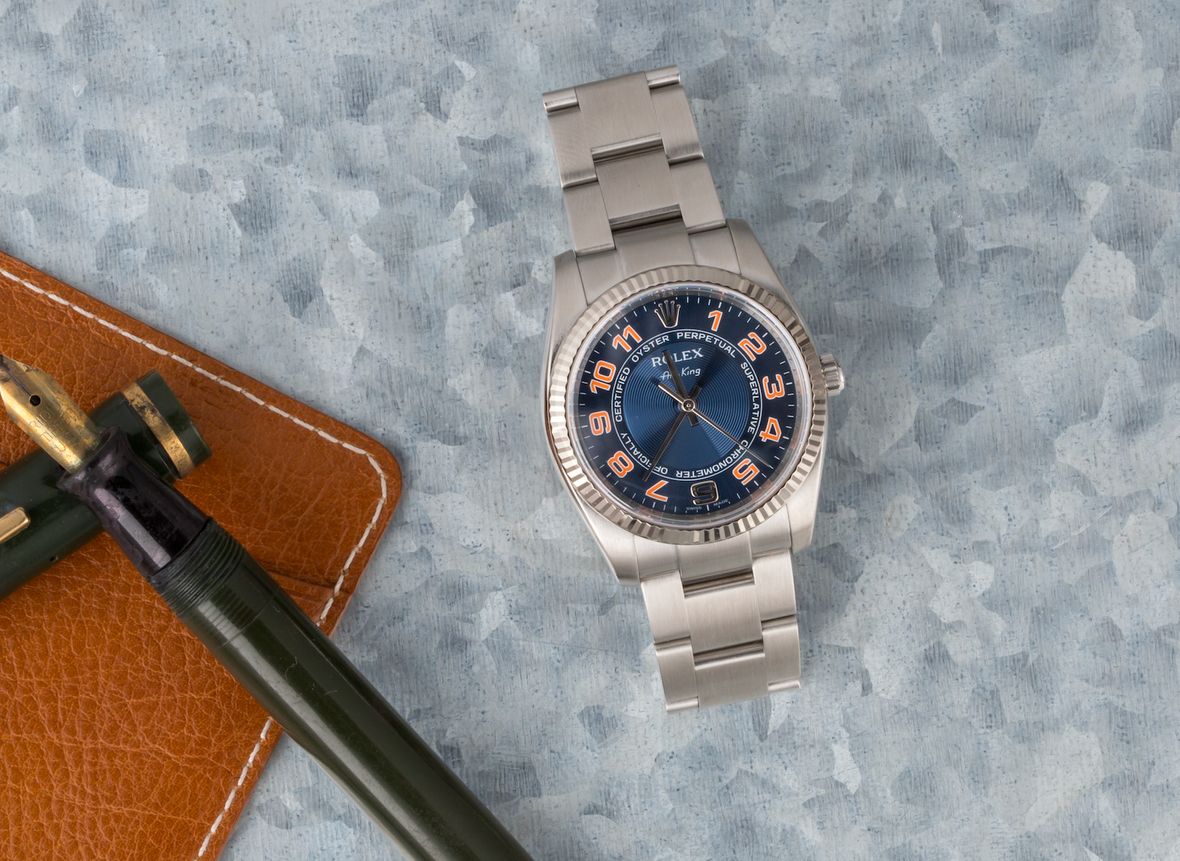 7. The Rolex Air-King 114234 Can Feature Pink or Lilac Super-LumiNova

One of the most attractive (and certainly underrated) features of the reference 114234 Air-King was its occasional use of lilac and pink Super-LumiNova batons. While neither may sound particularly masculine colors, designers restricted the use of lilac and pink to just eight of the 12-hour markers (all non-cardinal points). This unexpected flourish added a subtle character to the watch that could easily appeal to both men and women.

The Rolex Air-King reference 114234 was released in 2007 and thus predated the debut of chromalight (which wouldn’t hit the catalog until 2008 and even then, would initially only be used on the Deepsea Sea-Dweller). Rolex only used colored lume for a short window of time and on only a handful of models. As such, this unusually experimental use of color is something that marks an otherwise quiet White Rolesor model as a potential future classic. 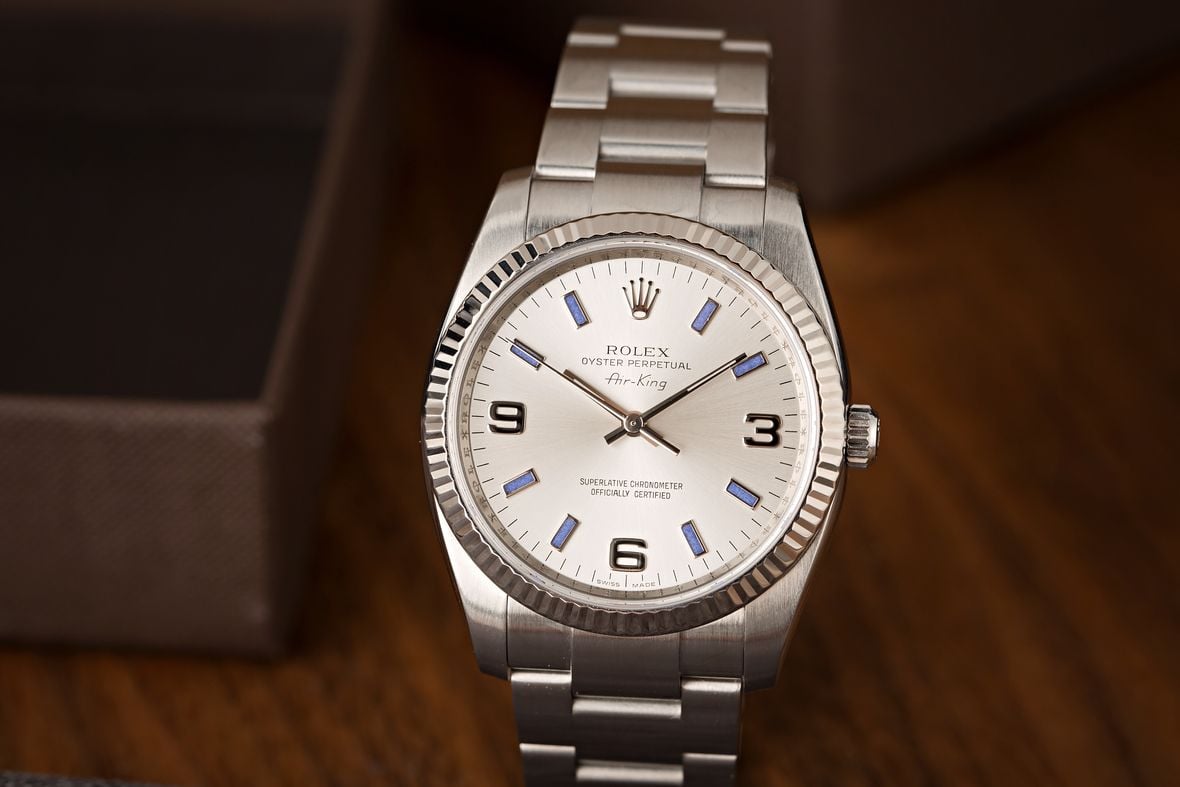 Why Choose One Metal When You Can Have Two? Our Favorite Two-Tone Rolex Watches

Smarts and Hybrids:  Torn between the two