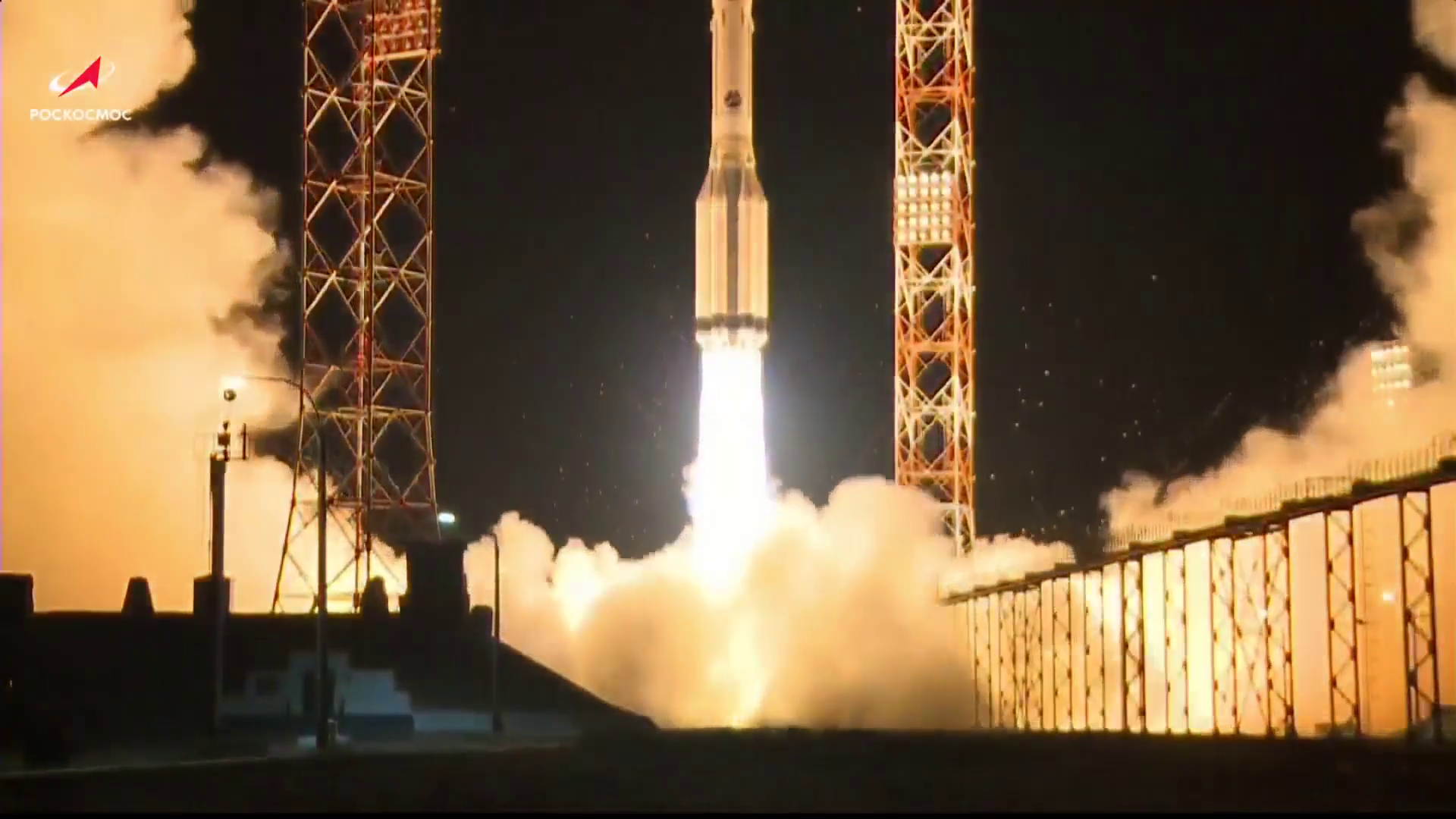 Roscosmos – the Russian Space Agency – has successfully launched a Proton-M rocket with two Russian Ekspress communications satellites from the Baikonur Cosmodrome in southern Kazakhstan into an initial Earth parking orbit.

This was the 110th total launch of the Proton-M, which first flew in April 2001 and has enjoyed 98 successful launches to date. This was also the first launch of the Proton-M in 2020, and the 6th launch for Roscosmos on the year so far —  including two successful launches of OneWeb satellites that took place from Baikonur earlier in the year, as Roscosmos was partially responsible for procuring the Soyuz rockets that launched these missions.

Proton-M is derived from Vladimir Chelomei’s UR-500 missile, designed as part of the Universalnaya Raketa – “Universal Rocket”, or UR – series. UR was created to cover a wide spectrum of classes of ballistic missiles and satellite launchers, with all of the rockets featuring common technologies and interchangeable components. 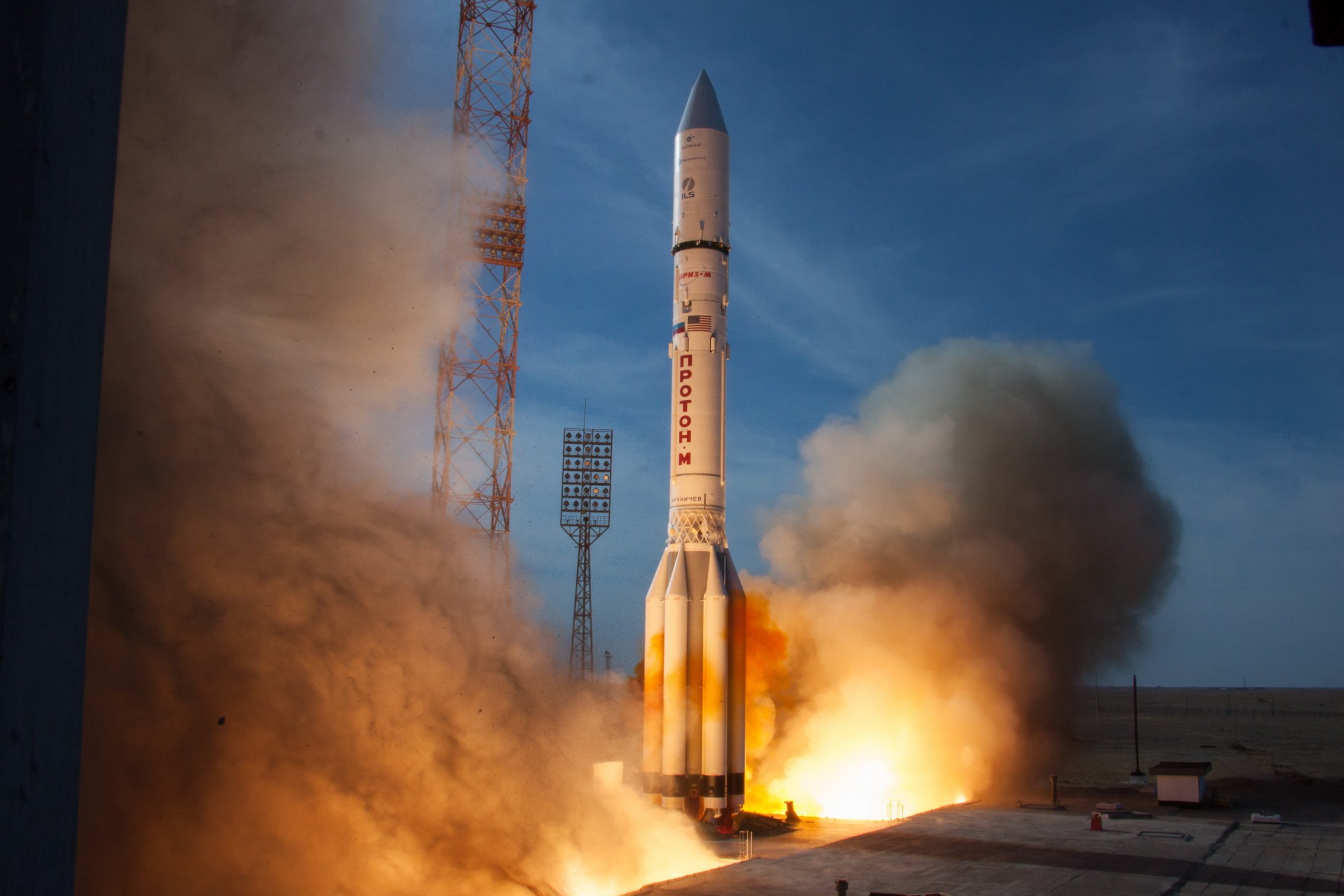 A Proton-M rocket launches from the Baikonur Cosmodrome – credit: Roscosmos

The UR-500, initially conceived as a two-stage intercontinental ballistic missile (ICBM), proved too large to be a practical missile and was eventually repurposed as a capable satellite launcher with an additional third stage. The two-stage version of the UR-500 flew four times throughout 1965 and 1966, with physics research satellites serving as the payloads.

The three-stage UR-500 – christened as the “UR-500K” and then the “Proton-K” – entered service shortly after, with its first flight occurring in March 1967. The rocket initially suffered from reliability issues but eventually became an effective and dependable workhorse for the Soviet and Russian space programs. The Proton-K launched a total of 310 times over the course of its tenure, with its last flight taking place in March 2012.

The Proton-M was developed as a modernized version of Proton-K, with upgraded engines and a digital flight control system featured as the major updates to the design. The rocket has since undergone several incremental “phase” upgrades, thereby increasing its performance and payload capacity.

The Proton-M rocket tasked with delivering its two Ekspress passengers to orbit stands approximately 58.2 meters (191 feet) tall, with a diameter of 7.4 meters (24.3 feet) on its first stage and 4.1 meters (13.5 feet) on its second and third stages.

The first stage consists of a central dinitrogen tetroxide oxidizer tank surrounded by six outboard fuel tanks filled with unsymmetrical dimethylhydrazine with an Energomash RD-275M engine underneath each outboard tank. At liftoff, these six engines produce a total of 10,532 kiloNewtons (2,368,000 lbf) of thrust. 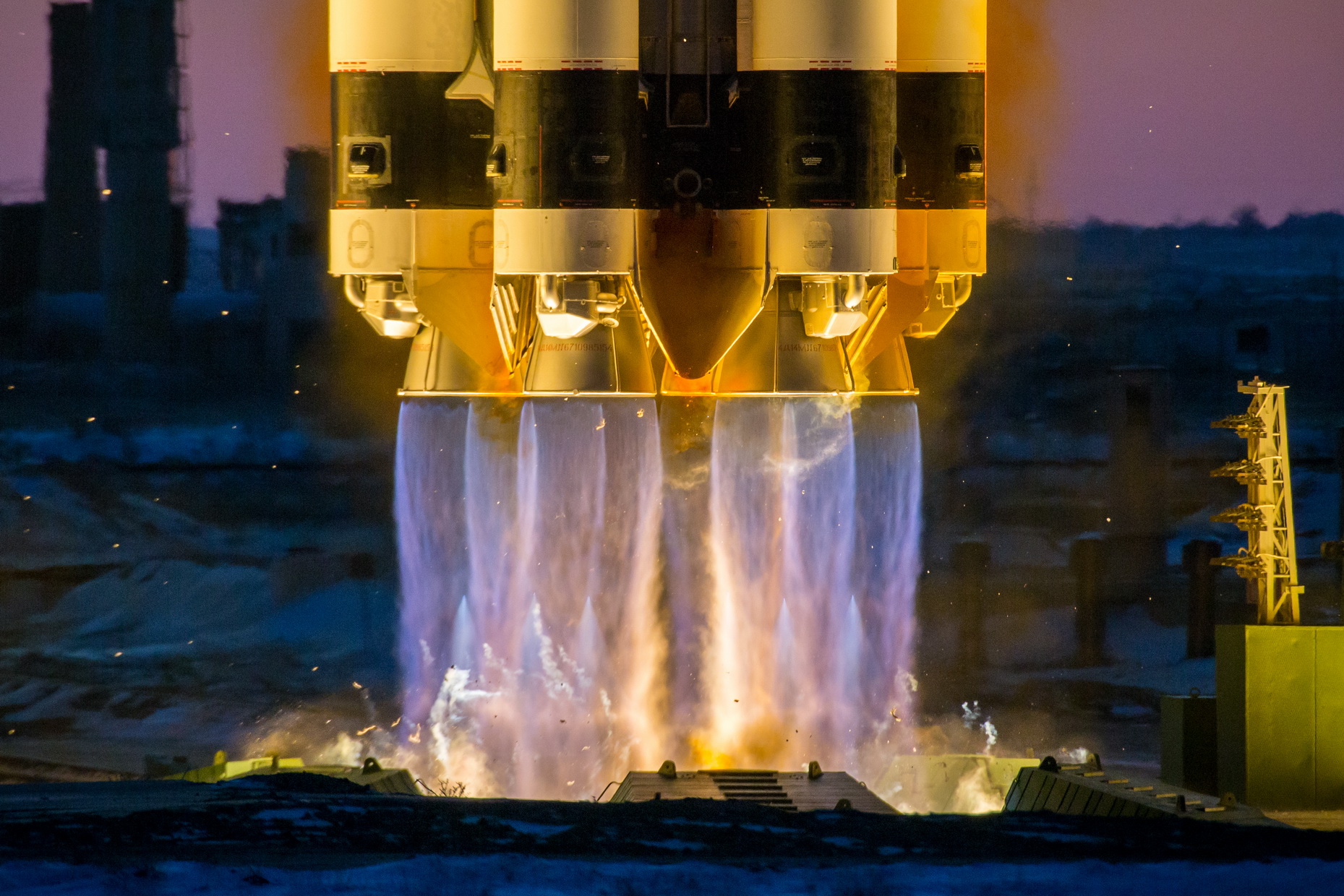 The second stage is powered by three RD-0120 engines and a single RD-0211 engine, which are able to provide approximately 2,399 kN (539,000 lbf) of thrust when in flight. These engines, which are also fueled by dinitrogen tetroxide and unsymmetrical dimethylhydrazine, burn for up to 3 minutes and 27 seconds before cutoff and stage separation.

The third stage of the Proton-M is powered by the RD-0212 propulsion system, which consists of two individual engines: an RD-0213 main engine and a four-chamber RD-0214 vernier engine system that assists with attitude control and thrust vectoring.

These engines utilize the same propellants as the first and second stages while a triple redundant closed-loop avionics system provides guidance, navigation, and control of the rocket during in-flight operations.

Proton-M also commonly features a smaller fourth stage used to place satellites into higher orbits and even onto interplanetary trajectories. For this mission, Proton-M was outfitted with a Briz-M (Breeze-M) upper stage, powered via a single 14D30 engine that produces approximately 20 kN (4,500 lbf) of thrust in the vacuum of space. This engine is capable of restarting up to eight times and enables precision placement of a spacecraft into its target orbit.

With the inclusion of the Briz-M upper stage, the Proton-M rocket as a whole is capable of delivering up to 6,000 kilograms (13,227 pounds) of payload to a Geostationary Transfer Orbit.

Two Russian Ekspress (Express) communications satellites – Ekspress 80 and Ekspress 103 – serve as the payload for Thursday’s launch from Baikonur. These two spacecraft are the 14th and 15th satellites in this series to be launched since the first Ekspress in March 2000.

The Russian Satellite Communications Company (RSCC), which owns and operates the Ekspress satellite network, ordered the production of the Ekspress-80 and -103 satellites in May 2016. Information Satellite Systems (ISS) Reshetnev served as the manufacturer.

After launch, both satellites will begin maneuvering into their operational orbits at Geostationary altitude, where they will provide communications services to Russia and the surrounding nations. Ekspress-80 will be stationed at 80 degrees East, while Ekspress-103 will operate at 96.5 degrees East — with the 103 degree East orbital position serving as a reserve. Both satellites have an on-orbit lifetime of 15 years.

The two satellites were originally scheduled to launch in late-March 2020. However, the flight was delayed several weeks as the Khrunichev State Research and Production Center — the manufacturer of the Proton-M rocket — replaced several defective bolts that are normally used as internal fasteners for certain elements of the launcher. As such, the launch was pushed back to late-July, with a firm target date of 30 July Moscow time (July 29 UTC) being set.

Once the repairs were completed, the three main stages of the Proton-M and the Briz-M upper stage were shipped by train from Khrunichev’s headquarters in Moscow, Russia, to the Baikonur Cosmodrome in Kazakhstan. The delivery was completed in June 2020, with the trip taking 10 days to complete.

Assembly of the launch vehicle and integration of the Ekspress-80 and Ekspress-103 satellites began on 21 July and was completed three days later. The rocket was then rolled out to Site No. 200/39 and lifted vertical on 26 July.

Due to the need to perform additional checks on certain components of the Proton-M vehicle, the launch was rescheduled for Friday, 31 July at 12:25 am Moscow time (Thursday, July 30 at 21:25 UTC).

Following a nominal launch, the Briz-M upper stage will conduct a series of five engine burns to place itself and the Ekspress payloads into the target orbit for spacecraft separation. Ekspress-80 is expected to be deployed first, with separation scheduled to take place at 17 hours and 59 minutes after launch. Ekspress-103 will be deployed approximately 17 minutes later.

As such, this is the longest mission duration for a Proton launch to date, with previous long-duration flights taking approximately 15 hours and 30 minutes to complete. These types of missions are supported by the Briz-M upper stage’s onboard batteries, which have a maximum lifetime of up to 24 hours on orbit.

Following the launch of Ekspress-80 and-103, Roscosmos will temporarily shift focus to their medium-lift Soyuz launcher ahead of the flight of a Soyuz 2.1b rocket with a Fregat upper stage and three Gonets communications satellites. The mission is currently scheduled to launch from the Plesetsk Cosmodrome in northwestern Russia no earlier than September 20.

The next flight of the Proton is tentatively scheduled to take place in early 2021, with either a Eutelsat or Intelsat spacecraft serving as the payload. The long-awaited launch of the Russian Multipurpose Laboratory Module (MLM), also known as “Nauka”, is also set to launch on a three stage Proton-M no earlier than April 2021, following extensive preparations at the Baikonur Cosmodrome.

The second test flight of the heavy-lift Angara A5 with a Briz-M upper stage and a mass simulator payload is also on the horizon for Roscosmos, who will hand control of the mission to the Russian military following the shipment of the rocket to the Plesetsk Cosmodrome. The launch is currently scheduled to occur no earlier than November 2020.

Rocket Lab rolls out first Electron at LC-2 ahead of Q3...