Russia launched the first in a new series of weather satellites to aid forecasting over… The post Russia’s Soyuz-2-1b launches Arktika-M No.1 weather satellite appeared first on NASASpaceFlight.com. 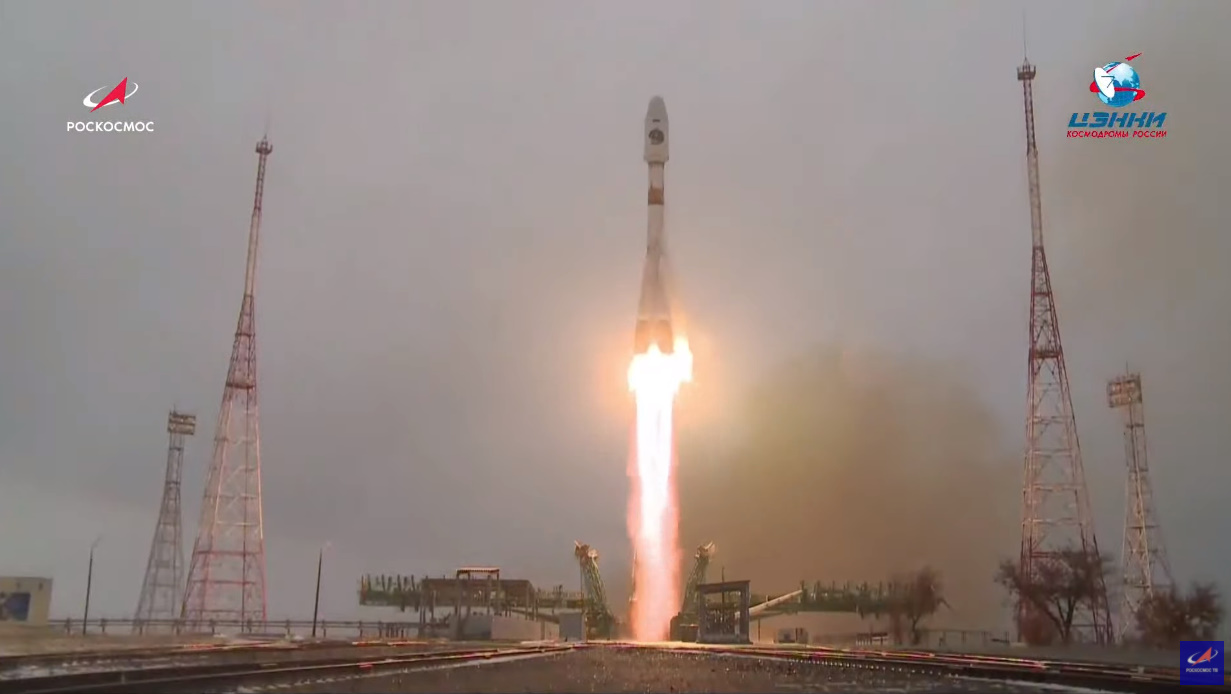 Russia launched the first in a new series of weather satellites to aid forecasting over its high-latitude regions. The Arktika-M No.1 satellite, aboard a Soyuz-2-1b/Fregat rocket, lifted off from the Baikonur Cosmodrome at 12:55 local time (06:55 UTC) on Sunday bound for an elliptical Molniya orbit.

The Arktika (Арктика, meaning “Arctic“) satellites will carry out a variety of missions to compliment other satellite constellations with additional coverage of Russia’s most northern regions. The Arktika-M component of this program focuses on meteorology, with its satellites carrying multi-spectral imaging payloads to help gather data for forecasting. These spacecraft are also equipped with a communications payload to relay data from remote surface-based weather stations and emergency signals.

Each Arktika-M satellite has a mass of about 2,100 kilograms (4,600 lb) and is designed to operate for ten years. Constructed by NPO Lavochkin, the Arktika-M spacecraft are based on the company’s Navigator platform. The spacecraft are three-axis stabilized and carry a pair of deployable solar arrays to generate power.

Original plans called for a pair of Arktika-M spacecraft to be launched, however Russia now plans to deploy at least five over the next four years. A follow-on Arktika-MP series is expected to begin launching in 2026. 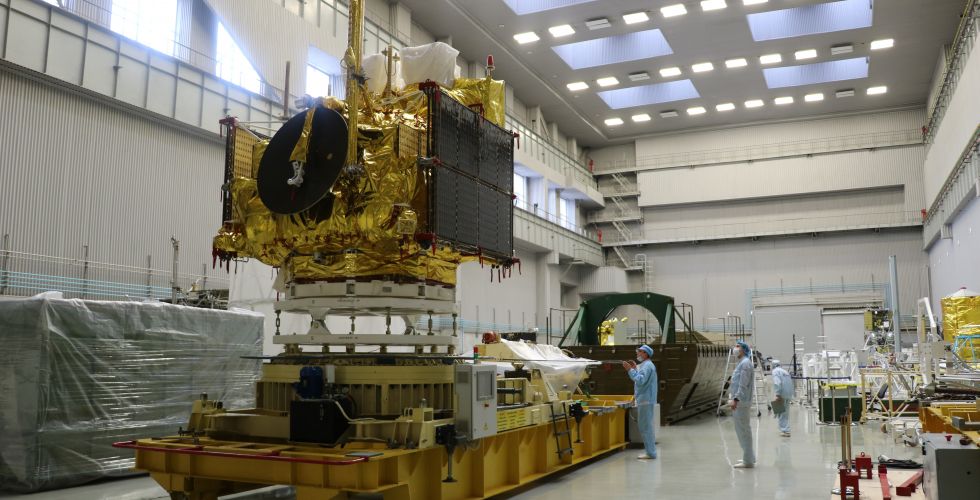 The Arktika-M No.1 spacecraft arrives at the Baikonur Cosmodrome for pre-launch testing – via Roscosmos

Arktika-M’s instrument loadout is very similar to that aboard Russia’s three Elektro-L weather satellites, which are also based on the same Navigator platform. Because the Elektro-L satellites operate in equatorial geostationary orbits, their coverage of the Earth’s polar regions is limited – which is where Arktika-M will perfectly complement their observations.

The primary instrument aboard Arktika-M is a visible and infrared spectrometer, derived from the MSU-GS spectrometer flown aboard Elektro-L. This will be used to image the Earth in at least ten different wavelengths ranging from visible light to the thermal infrared. Visible-light and near infrared images will help meteorologists monitor cloud cover and atmospheric water vapor, while thermal infrared data can be used to track temperatures.

The resolution of this instrument aboard Elektro-L varies between one and four kilometers (0.6 to 2.5 miles, 0.5 to 2.2 nautical miles) depending on wavelength, and the version aboard Arktika-M will likely have similar performance.

Arktika-M is also equipped with the GGAK-VE suite of heliogeophysics experiments to monitor space weather, derived from the GGAK-E complex aboard Elektro-L. This consists of a magnetometer to measure Earth’s magnetic field and sensors to detect and monitor charged particles in the ionosphere and solar radiation.

Finally, its communications payload will be used to collect and relay data from research stations in the Arctic, while also carrying emergency communications as a part of the KOSPAS-SARSAT system.

The Molniya orbits in which Arktika-M will operate are well suited to their mission, allowing the spacecraft to spend most of their time high above the Arctic. Named after a class of communications satellites developed by the Soviet Union, which were the first to use this type of orbit in the 1960s, Molniya orbits are a special class of highly elliptical orbit. 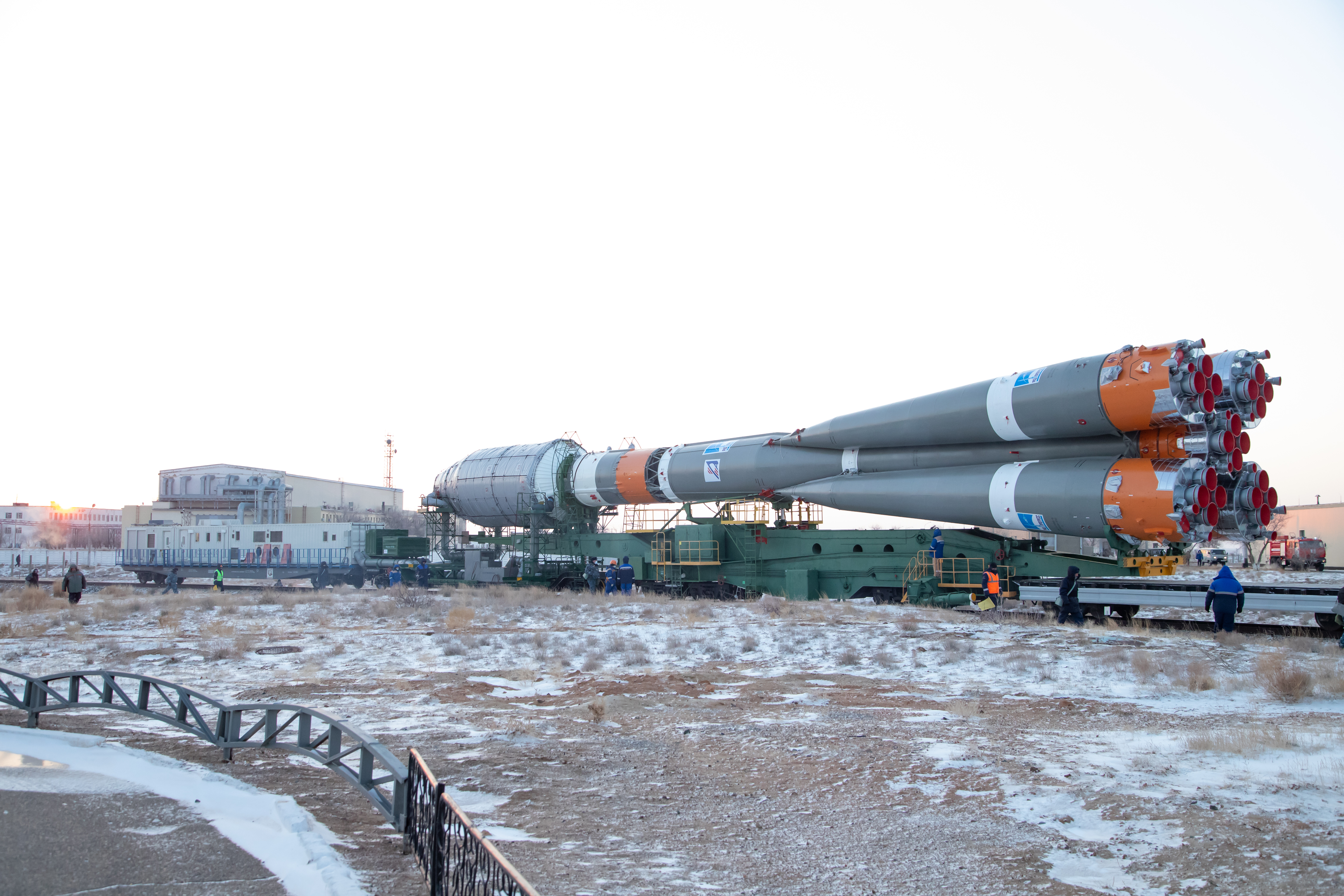 The Soyuz-2-1b rocket with Arktika-M No.1 is rolled out for launch at Site 31/6 at the Baikonur Cosmodrome – via Roscosmos

A Molniya orbit is inclined at 63.4 degrees, which cancels out perturbations which would cause the orbit’s argument of perigee to change over time. The orbit has a period of twelve hours, allowing a satellite to complete two revolutions per day, while the elliptical shape of this orbit means that the satellite will spend most of its time on the same side of the planet as its apogee – the highest point of the orbit. Combined with the frozen argument of perigee, this can be used to keep a satellite over the northern hemisphere for most of its orbit.

The Arktika project began in the mid-2000s with discussions within Roscosmos and the Russian government, with the first contracts for NPO Lavochkin to begin constructing satellites awarded in 2012. While the first launch was originally scheduled for 2015, delays in development combined with delays to the Elektro-L program pushed this date back.

Following Sunday’s launch, the next Arktika-M satellite is expected to be deployed later this year.

Original plans for Arktika called for several other classes of satellite in addition to the meteorological component. Molniya-orbit Arktika-MS satellites would provide communications and augment satellite navigation signals, with dedicated sets of spacecraft for commercial and Russian Government use, while a pair of Arktika-R spacecraft in lower sun-synchronous orbits would carry radar-imaging payloads for remote sensing – including surveying for resources and environmental monitoring. None of these satellites are currently known to be scheduled for launch.

Arktika-M No.1 used a Soyuz-2-1b carrier rocket equipped with a Fregat upper stage to orbit. Russia’s workhorse rocket, the Soyuz-2 is a descendent of Sergei Korolev’s original Soyuz design of the 1960s, itself derived from his R-7 ballistic missile which first flew in 1957. 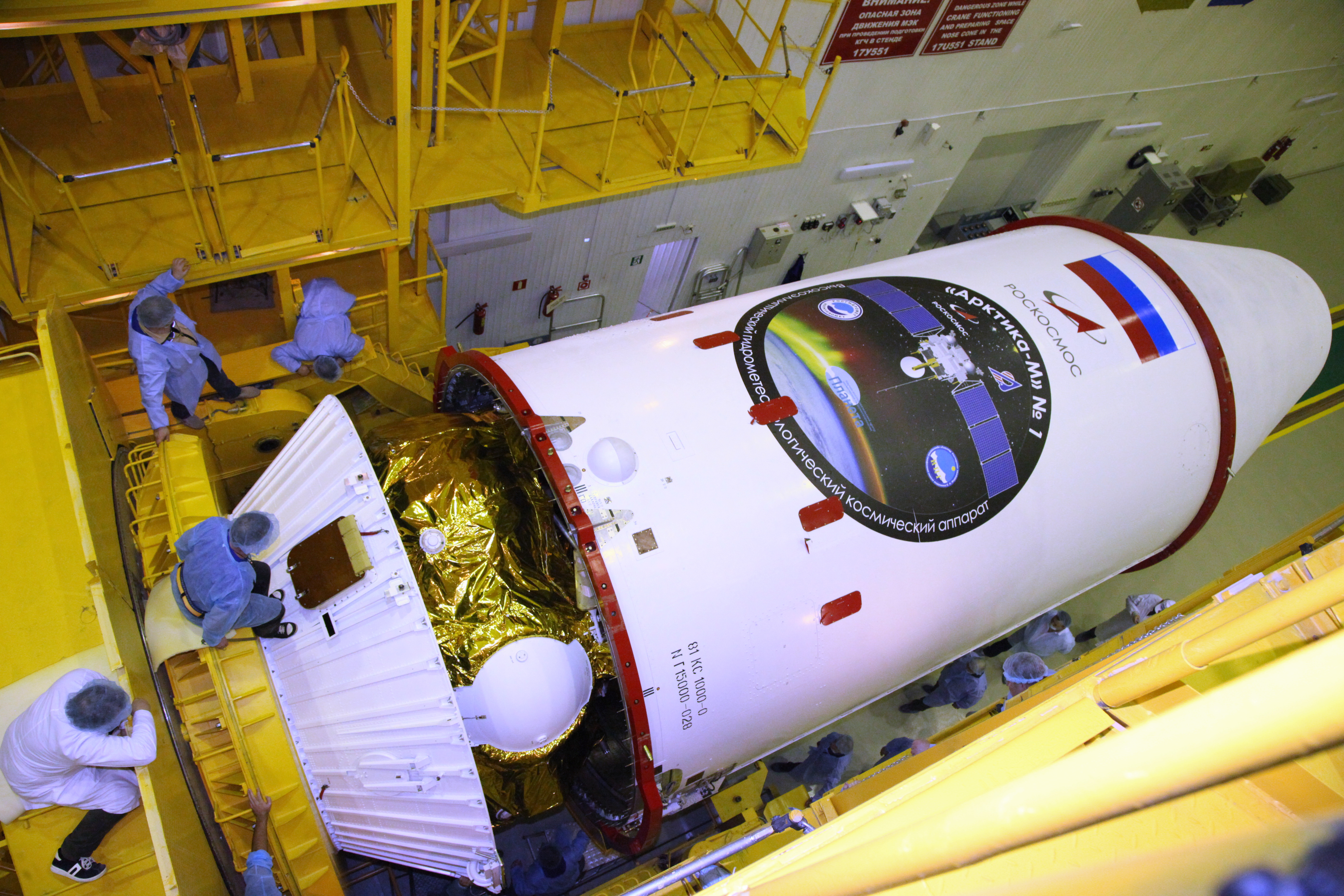 Soyuz-2, which was the first version of the Soyuz to use digital flight control systems, as well as incorporating upgraded engines and further modernizations, first flew in 2004.

There are three different versions of the Soyuz-2: the Soyuz-2-1a is a straightforward modernization of the previous-generation Soyuz-U and Soyuz-FG designs; Soyuz-2-1b provides additional performance by incorporating a redesigned and up-engined third stage; finally, the Soyuz-2-1v is a smaller two-stage version of the rocket optimized for launching lighter payloads.

For Sunday’s launch, the three-stage Soyuz-2-1b configuration was used, with an additional fourth stage in the form of the Fregat.

Fregat is a restartable upper stage which is often used in conjunction with Soyuz, allowing satellites to be deployed into higher or more complex orbits than Soyuz can accomplish on its own. Fregat was developed from the propulsion systems designed for the two Fobos probes that the Soviet Union sent to Mars’ moon Phobos in 1988, and can make up to twenty engine burns in flight.

Sunday’s launch took place from Site 31/6 at the Baikonur Cosmodrome in Kazakhstan. Built to support testing of the R-7 missile in the 1950s, Site 31/6 is currently the only operational Soyuz launch pad at Baikonur meaning that is it also the launch pad currently used by crewed Soyuz missions heading to the International Space Station. 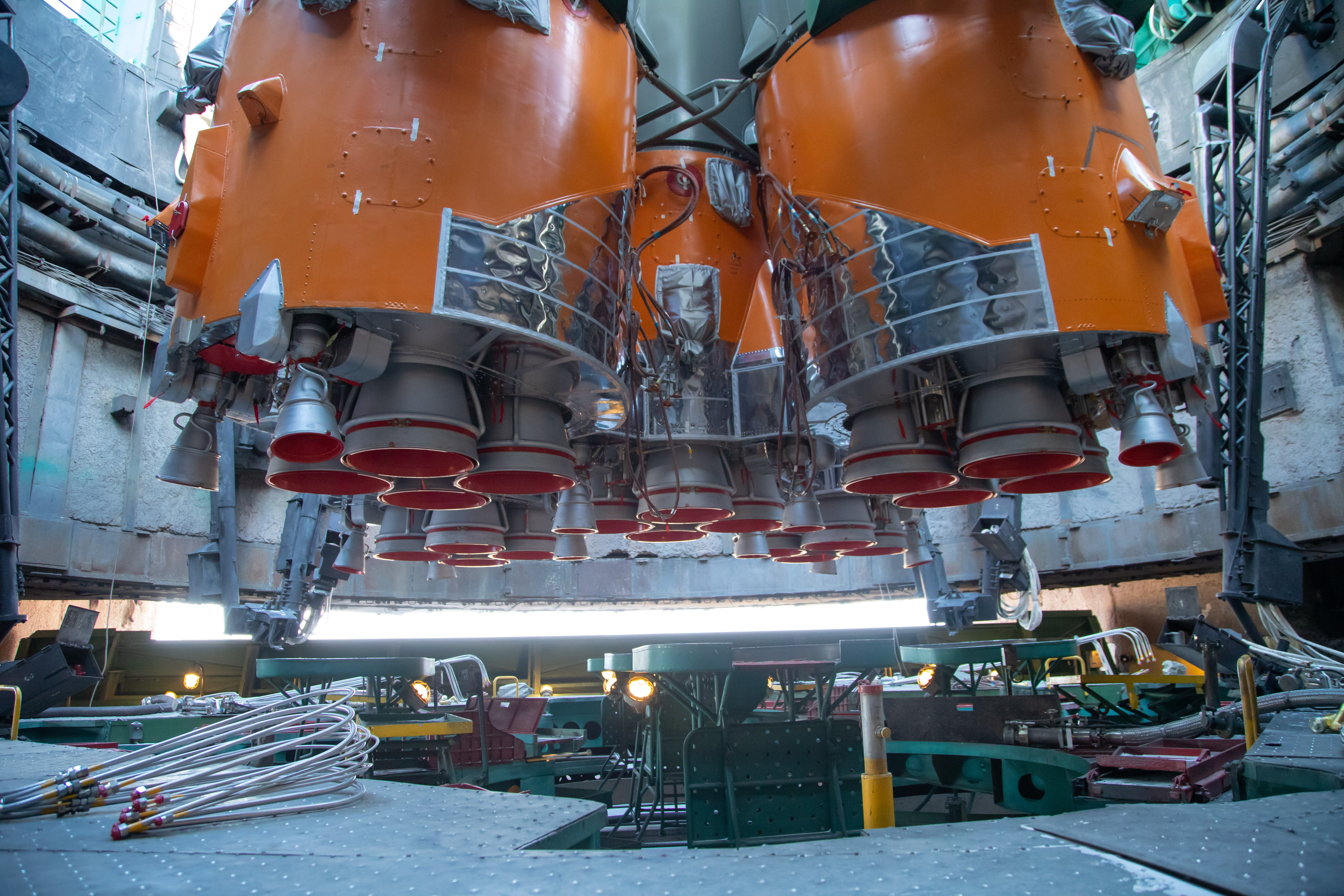 A second Soyuz pad, the historic Site 1/5, was operational until 2019 but has not undergone the upgrades necessary to support Soyuz-2 rockets. All earlier versions of the Soyuz vehicle have since been retired.

Soyuz begins its startup sequence about sixteen seconds before liftoff, igniting the four RD-107A engines of its first stage and the single RD-108A engine of its second stage at preliminary thrust levels. Over the next few seconds, the engines build up to full thrust, and once the countdown reaches zero, the launch pad swing arms open and Soyuz climbs away to begin the journey into orbit.

The first stage of the rocket consists of four boosters, clustered around the core – or second stage – with each booster equipped with its own propellant tanks and engine. The RD-107A and RD-108A engines on the two stages share a nearly identical design, with the RD-108A incorporating four additional vernier nozzles to help control the rocket’s attitude as it climbs towards orbit.

Both stages burn together during the earliest stages of flight up until first stage separation, 118 seconds into the mission. As the first stage separates, residual oxygen is vented from the nose of each booster to push it clear of the still-firing second stage.

Following booster separation, the second stage continues its burn for another 170 seconds. Just before the end of second stage flight, the rocket’s third stage ignites, using a “hot staging” technique whereby it starts up before second stage shutdown. Soyuz uses this type of stage separation so the rocket is always accelerating forwards, which keeps the propellant in the third stage tanks settled.

The interstage between the second and third stages has a lattice structure, allowing exhaust gasses to escape safely prior to the stages being uncoupled. A few seconds after separating from the second stage, the aft skirt section of the third stage is jettisoned.

Powered by a single RD-0124 engine, the third stage burns for four and a half minutes. At the conclusion of third stage flight, Fregat separates to begin its role in the mission, igniting its S5.98M engine for the first time shortly afterwards.

Fregat’s first burn inserts itself and the payload into an initial low Earth parking orbit, with two subsequent burns over a period of several hours required to reach the target Molniya orbit. Spacecraft separation will occur after Fregat’s third burn has been completed.

Sunday’s launch was Russia’s third of 2021, following a pair of Soyuz launches earlier in February – one with a military Lotos-S satellite from the Plesetsk Cosmodrome and another with the Progress MS-16 resupply mission to the International Space Station from Baikonur.

Russia’s next launches are expected in late March, with a commercial rideshare mission from Baikonur and a 36-satellite launch from the Vostochny Cosmodrome for OneWeb scheduled to fly a few days apart – using Soyuz-2-1a and 2-1b vehicles respectively.

Silhouettes of Cybertruck and Starman on Mars

Rocket Lab scrubs launch of “In Focus” mission for Planet,...