Ryan Serhant Selfied, Shared and Streamed His Way to $4 Billion in Sales. Now He’s Building His Own Brokerage

Ryan Serhant and a rising crop of other agents are upping the ante on personal branding. But are they overshadowing the real estate? The post Ryan Serhant Selfied, Shared and Streamed His Way to $4 Billion in Sales. Now He’s Building His Own Brokerage appeared first on Real Estate News & Insights | realtor.com®. 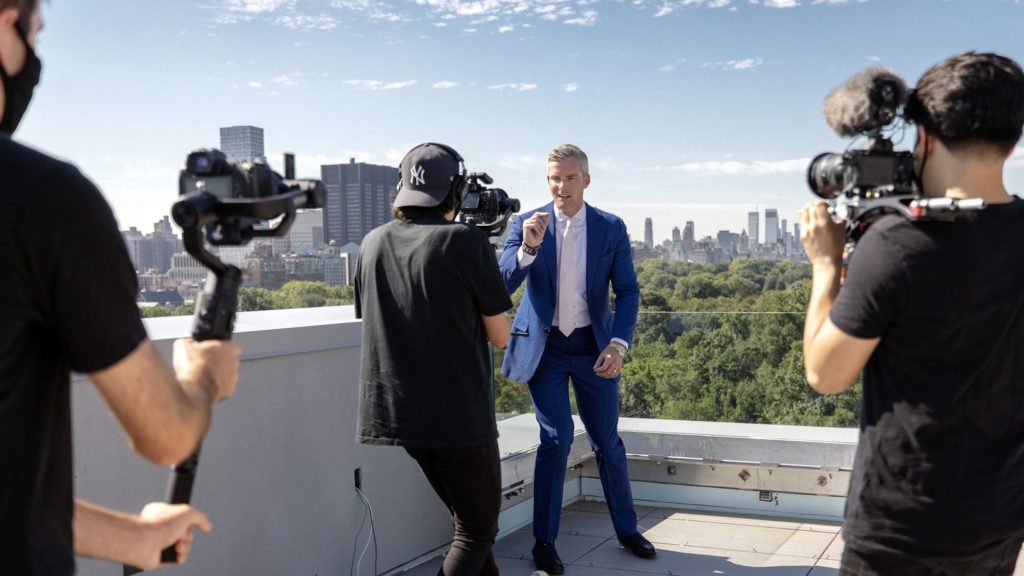 Real-estate agent Ryan Serhant is standing with a professional film crew on the roof of one of his latest projects, a pricey condominium project on the north end of Central Park, waiting for a small aircraft to spell out the name of the building in the sky above. When the plane finally appears, he jumps into action, hamming it up for the cameras and pointing animatedly at the scrawl overhead, which reads “145 CPN.” For Mr. Serhant, who made his name as one of the stars of the reality television show “Million Dollar Listing New York,” the skywriting stunt, for which he paid around $6,000, is the latest of his outlandish tricks to market high-end listings in New York and across the country.

He’s leaned out of flying helicopters, stood on top of a SUV in the middle of Manhattan traffic, pretended to get carried away by 150 giant balloons and thrown a 1980s-themed party complete with a DeLorean for a listing that had dated décor. It is all in the name of one thing: clicks.

Obviously, Mr. Serhant’s ultimate goal is selling real estate. But building his social media presence is proving to be an effective means to that end—in fact, some of his crazy stunts involve properties he isn’t even representing. Mr. Serhant is one of a rising crop of real-estate agents who are blurring the lines between real-estate marketing and entertainment by creating professional-grade online photo and video content designed to get global attention for their ultraexpensive properties and bolster their personal brands. A far cry from the brokers of yesteryear who relied on pictures in their brokerage office windows to sell real estate, these agents speak real estate’s new language of impressions, conversions, online geo-targeting and digital metrics. They are shelling out tens of thousands of dollars to make themselves and their listings internet famous.

“It’s an attention game. It’s not who has the better postcards, it’s about who can attract the most eyeballs,” Mr. Serhant said. “I can walk into an appointment with a seller and say ‘there are 30,000 active real-estate agents in the city, there’s hundreds and thousands of us all over the world, but I have a level of exposure you can’t buy.’ ”

Mr. Serhant has decided that it’s time to cash in on his name recognition. After more than a decade at the brokerage Nest Seekers International, he is starting his own company, which will be known as “Serhant.” The new firm will have its own film studio, digital-marketing lab and a tech team dedicated to tracking the reach of the brand and its content across the web. Mr. Serhant said he decided to launch his company now because he believes “the traditional real-estate brokerage model is broken.”

“The brokerage company, open houses, and pretty photos don’t sell homes today the way they did 10 and 20 years ago,” he said. “Buyers of high-end real estate, and their children, go to YouTube and social media on their phones to research homes and agents now. I was already doing things differently from everyone else and it has been working incredibly well so I thought why not do it differently and build a firm from the ground up?”

Eddie Shapiro, Nest Seekers International founder and chief executive, noted that Mr. Serhant is not cutting ties with the company entirely. He will close out the business he signed at Nest Seekers, including his listings and new developments. Mr. Shapiro said that the company’s agents are now involved with a new reality real-estate show on Netflix called “Million Dollar Beach House.”

Mr. Serhant’s new business will crank out social-media content and multiple, dedicated short-form series for its YouTube channel, “Listed by Serhant,” based around his agents and listings. One series, provisionally called “3 in a Million,” will invite regular people into three listings and ask them to guess the price. Another, called “Meals in Mansions,” will be hosted by an agent at the firm who enjoys cooking and who will make meals in the kitchens of the firm’s high-end home listings.

Mr. Serhant, whose YouTube channel has one million subscribers, already produces his own YouTube videos weekly, putting together a mix of listing reveals, personal day-in-the-life style vlogs that showcase his family and personal life and business advice tutorials with titles like “How to OVERCOME self-doubt” and “How to SUCCEED in a VOLATILE market.” While these videos don’t directly sell his listings, Mr. Serhant said, they help him build a global following, which, in turn, gives his listings better exposure.

These tactics aren’t for everyone and some competitors snipe that Mr. Serhant is more interested in being famous himself than dedicating his time to his clients. Others said these stunts are more likely to attract voyeurs than actually result in deals, since ultrahigh-net-worth buyers aren’t likely to be shopping for multimillion-dollar properties on Instagram.

But Mr. Serhant argues that the numbers prove out his concept: His team at Nest Seekers did $1.4 billion in closed and in-contract sales last year, mostly in New York and in the Hamptons, making him one of the most successful agents in the country. He estimates that since he started in the business, he and his team have sold over $4 billion in property. Last year, they sold a $40 million house in Bridgehampton to a prominent executive who reached out to Mr. Serhant after finding him on YouTube, he said.

“If a listing video gets 10,000 views or a million views, that’s a big difference,” he said. “I tell clients, ‘I work incredibly hard to grow my brand for your benefit so I can put your listing in front of more eyeballs than anyone else in the business.’ ”

Mr. Serhant said many of his wealthy clients have secret accounts on Instagram that aren’t registered in their real names. One former client, so privacy-obsessed that his chauffeur-driven car had blacked-out windows, had an Instagram account and mentioned several of the properties he’d seen on Mr. Serhant’s account.

“Instagram isn’t a joke now,” Mr. Serhant said. “People will go to your Instagram to see who you are as a person before they pick up the phone. You don’t need a business card, you need a powerful social-media profile.”

I’m giving $50,000 in cash to the first broker in 2020 to bring a new buyer to our amazing Lower East Side new development, @196orchard. This is a bonus on top of a standard commission. This is for the sale of a 2 bedroom or larger. Watch the video above for more details, go to 196Orchard.com, and head to my YouTube channel for this week’s Vlog about it that just went live. We’re getting crazy in 2020. Ready? Set. GO ????

Industry insiders said there is no doubt that the business is shifting even more online, a shift supercharged by the coronavirus pandemic. But they remain split on whether it is a good idea for the agent to be the star of the show.

“Buyers during Covid are being reprogrammed,” said Bradley Nelson, chief marketing officer at Sotheby’s International Realty. “Before they visit a property in person, they’re expecting a video tour.”

‘It’s an attention game. It’s not who has the better postcards, it’s about who can attract the most eyeballs.’

Mr. Nelson said his firm has seen “explosive growth” in video during the pandemic. The firm’s YouTube channel saw a 137% increase in the number of views, for instance. But for Sotheby’s, the content is less about the stunts and always glorifies the property over the agent, Mr. Nelson said.

Alexander Ali, the Los Angeles-based chief executive of Society Group, a marketing consulting firm for high-end real estate, said he finds that content tends to be more engaging when the agent does insert their own personality into it. His firm has even started a weekday Instagram live show called “Real Talk,” where agents, architects, developers and designers appear to discuss trends. Mr. Ali said the show has built such a following based on its entertainment value that his clients now have a built-in audience to which they can show their properties.

Tim Smith, a luxury agent in Orange County, Calif., who co-owns his own production company, said he has spent close to $50,000 on a single marketing video for a property, designed to be so entertaining that it spreads online quickly. He has personally appeared in some of them.

When he listed a $45 million Newport, Calif., home a couple of years ago, he used professional filmmakers, a string of social-media celebrities and the artists behind the 2010 party anthem “Teach Me How to Dougie” to create a rap video about the property, which unfolded like a regular music video until near the end, when the regular lyrics were swapped out for intel on the property. Mr. Smith personally rapped about the property’s “game room and a gym, two bars for your gin.”

The videos are designed to be “snackable” and “shareable,” said Mr. Smith, in the hope that they’ll reach buyers outside of the local community. Buyers from other markets are more likely to buy blockbuster listings and don’t get so bogged down in the dynamics of the local market, he said. Once Mr. Smith’s team sees a prospective buyer engage with their content, they start to retarget them online, showing them other listings or different marketing materials, he said.

These projects also have upside, Mr. Serhant said. With views skyrocketing, the agent said the media content his team produces for YouTube provides another revenue stream for the business since it can support advertising revenue. That is especially valuable right now, since the real-estate market in New York has taken a nosedive. His company will also continue to operate paid Serhant-branded educational programs in which agents across the world can enroll. The firm will also have a venture capital arm to invest in new business ideas, he said.

“All day everyday people yell at me on the street, ‘Serhant! The real estate guy!’ ” he said. “I’m a walking billboard for luxury real estate. It’s not easy to do, but it really does pay off.”

‘Virtual hearings for duty possession cases are not workable’

Why the Coronavirus Has Me Window Shopping Real Estate...

‘Staycation’ Central: Where To Find the Best Homes for...