Amphibians are ectotherms that live dual lives — they start off in water, breathing with gills, and end up breathing air with lungs. 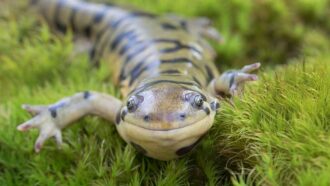 This is a group of animals that includes frogs, toads, salamanders and caecilians. Amphibians are all vertebrates — meaning they have a spine and a skeleton. They are tetrapods, which means they have four limbs (though some will lose their limbs as they develop). They are also ectotherms. That means their body temperatures vary with the environment around them.

What makes amphibians unique is that they live a “double life.” Most amphibians start life as larvae living in water. They look very different than their adult parents. The larvae have gills like fish. They get the oxygen they need from the water. But as a baby amphibian grows up, it undergoes metamorphosis — a dramatic body change. By the time the amphibian is an adult, it usually has lungs, not gills. They can now breathe air, on land. A few amphibians don’t bother with lungs and instead absorb oxygen through their skin.

One example of an amphibian is a frog. Tadpoles are frog larvae. They have gills and tails, but no legs. Most hatch from eggs in water. As they grow, they lose their gills and tails. At the same time, they grow legs and lungs.

Many amphibian species are suffering from a new infection — a fungal disease called Bd. .

New solution for carbon dioxide: Turn it into ‘green’ fuel

‘Landlords cannot continue funding tenants where the government should be helping...

Is The Matter In Our Universe Fundamentally Stable Or Unstable?