An atom is the smallest possible piece of a chemical element. 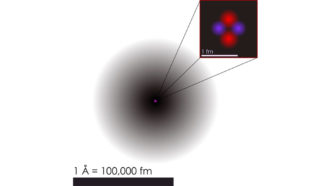 An atom is the smallest possible piece of a chemical element. All matter is made of groups of atoms bonded, or connected, together into molecules.

The word atom comes from the Greek word “atomos,” which means “indivisible.”  Scientists used to think that atoms could not be broken up into smaller parts. But today, we know that they can. Atoms are made of smaller parts — protons, electrons and neutrons. Protons are particles with a tiny positive electrical charge. Neutrons have no electrical charge. And electrons have a tiny negative charge.

In an atom, the protons and neutrons hang out in the center, or nucleus. The electrons travel in a cloud around the nucleus. The cloud is split into layers called orbitals, where electrons are likely to be. Atoms of different elements have different numbers of protons, neutrons and electrons. The number of protons an atom has (its atomic number) determines which element it is.

The combination of protons, neutrons and electrons in an atom give each element its unique properties. For example, the four electrons in carbon’s outermost layer give this atom the ability to bond with up to four other atoms. This makes carbon an essential building block for every living thing on Earth. The 226 neutrons in radium-226 make this atom glow in the dark.

Because they are made of smaller particles, atoms can be broken up into pieces. Once that happens, though, the pieces are no longer a part of one chemical element. Break up a carbon atom, and you no longer have carbon. So a carbon atom is still the smallest possible piece of carbon.

Cut a grape in half, pop it in the microwave, and you’ll get a tiny fireball of electrons and electrically-charged atoms.

How To See Comet NEOWISE, Earth’s Most Spectacular Comet Since 2007

Extreme pressure? Diamonds can take it

Jupiter may have ‘sprites’ or ‘elves’ in its atmosphere

Are Any Stars Visible In The Night Sky Already Dead?

Did Hubble Just Find New Stars Where Planets Are Impossible?

What the mummy’s curse reveals about your brain