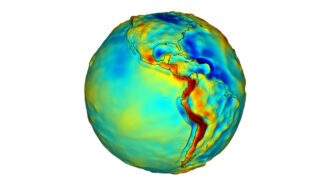 This is a fundamental force that attracts objects with mass toward each other. Everything that has mass also has gravity. For the everyday objects you encounter, their gravity is so small you’d never notice. But when objects have a lot of mass, they also have a lot of gravity. Their gravity will pull other objects toward their center. We are held to the Earth by the planet’s gravity. We also exert gravity back on the Earth, but because we are so small, it doesn’t make much of a difference.

If we were on another planet, such as Mercury, we would feel like we weighed less. It’s not because our mass is different — it’s not. Instead, it’s because Mercury’s mass is less than that of Earth. Mercury doesn’t have as much gravity, and so we wouldn’t feel as much pull as we feel on Earth.

Gravity decreases with distance. The farther away you are from a massive object, the less of its gravity you will feel. Once people get into space around the Earth — for example, in the International Space Station — the pull of gravity feels much smaller. There, people experience microgravity.

The Earth is kept in orbit around the sun by the sun’s gravity. The sun is so massive it attracts planets from Mercury out to Uranus. But go out far enough, past Pluto, and even the sun will lose its pull.

Gravity doesn’t just pull things down — it can hold huge sandstone arches up.

Some Neandertal genes may up the risk of severe COVID-19

When prey get scarce, these jellies become cannibals

10 Fantastic Finds From Hubble’s Deepest-Ever View Of The...