Planets have to orbit a star, be big enough to form a sphere and keep other objects out of their path around their star. 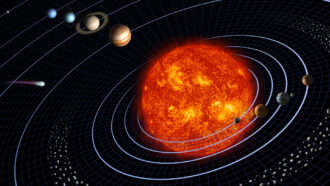 These are more than rocky bodies orbiting the sun. Planets have to fulfill three criteria. First, they have to orbit a star in a predictable way. In our solar system, that star is the sun. Planets orbiting other stars are also called exoplanets.

This last reason is why Pluto is not a planet; it’s a dwarf planet. It’s big enough to be round but not big enough to clear asteroids or other junk from its orbit.

The International Astronomical Union wrote this latest definition of “planet” in 2006. But it’s not the final word. Scientists can change their definition of planet — or of anything else — as research changes what we know about our universe.

The word “planet” comes from the Greek word “planetes.” It means “wanderer.” That’s because when seen from Earth, planets move around a lot more in the sky than stars do. Even with the current definition of a planet, they aren’t rare. In fact, there are more planets in our galaxy than there are stars.

All planets have to orbit stars — unless they don’t.

A new chameleon species may be the world’s tiniest reptile

How To Witness Astronomy’s Once-In-A-Lifetime Planetary...

Camels have been dying after mistaking plastic for food

Some identical twins don’t have the exact same DNA