Our resident used boat expert Nick Burnham picks out four fine 45ft flybridge yachts available on the secondhand market...At this size and style some choices are obvious. 45ft flybridge yachts used to be the stock in trade for the big British builders so they are well represented by Fairline and Sealine with their classic Phantom 46 and innovative F43 models respectively. Beyond that, the Muse 44 is an interesting alternative – part of […] This article Secondhand boat buyers’ guide: 4 of the best 45ft flybridge yachts for sale appeared first on Motor Boat & Yachting. 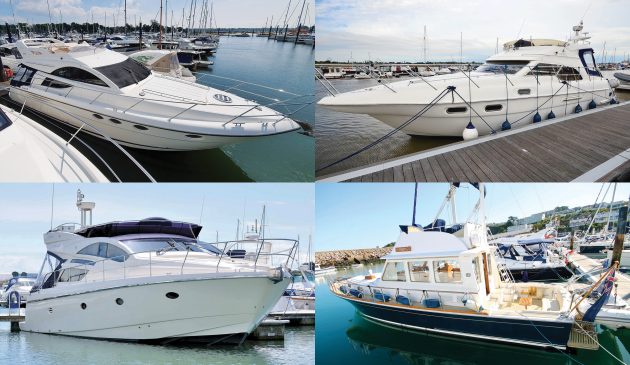 At this size and style some choices are obvious. 45ft flybridge yachts used to be the stock in trade for the big British builders so they are well represented by Fairline and Sealine with their classic Phantom 46 and innovative F43 models respectively.

Beyond that, the Muse 44 is an interesting alternative – part of Rodman’s luxury Muse line that now stretches across four models to 74ft. And for the wildcard? The frankly gorgeous Grand Banks Eastbay 43 fits the brief perfectly, offering something genuinely different yet still surprisingly practical. Something for everyone. 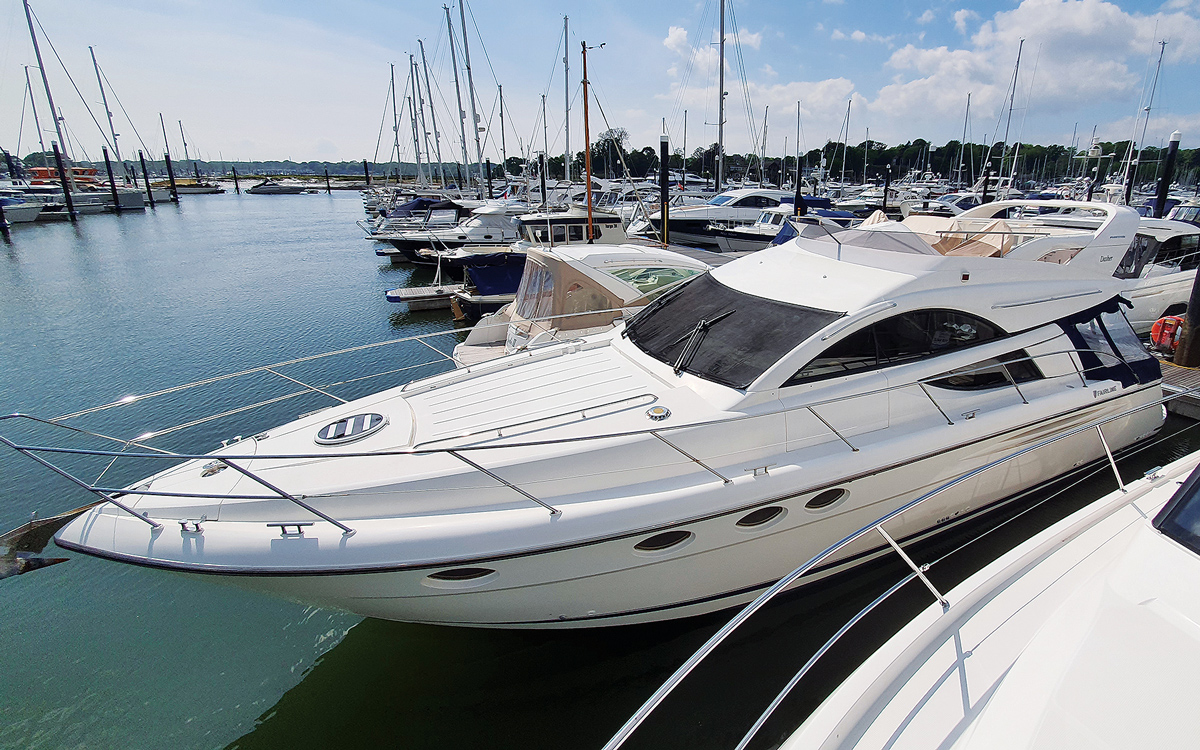 In the Nineties and early Noughties, Fairline’s Phantom flybridge range slotted beneath its high-end Squadron motor yachts, being perhaps a little more practical and a little less glitzy. Slightly confusingly, the Phantom 46 overlapped the larger Squadron range which started at 43ft, and more recently Fairline has consolidated all flybridge models under the Squadron banner.

Classic American cherry and cream leather greet you as you step inside. There are some neat details, like the handrail built into the headlining that helps you through the saloon in turbulent conditions, and split helm and navigator seats which allow either to be accessed without climbing past the other.

The galley is on the main deck too, forward to port and one step down, leaving space on the lower deck for a three-cabin, two-heads layout that includes a forward ensuite master cabin and two guest cabins, one with bunk beds and the other with side-by-side berths. And if that’s still not enough, the saloon converts to further sleeping and there’s a crew cabin beneath the cockpit seating! 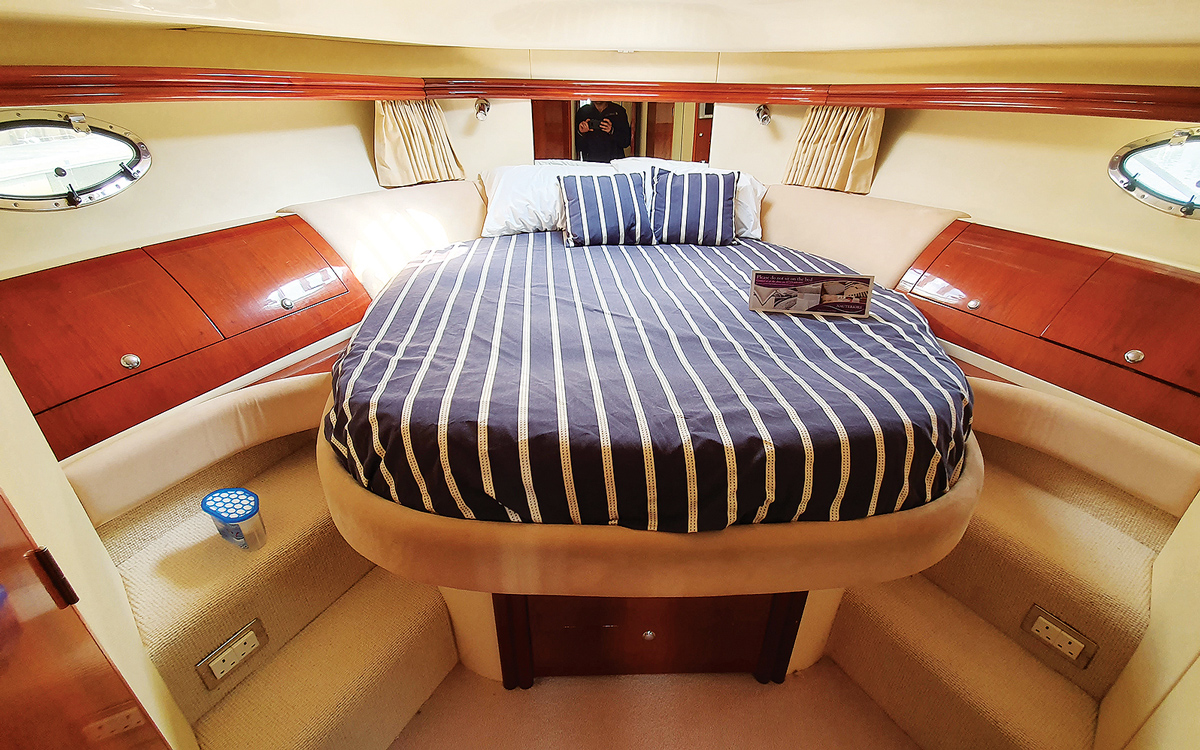 Guardrails sweep well back, making accessing the 10-inch wide side decks on the Phantom 46 feel safe and secure, and there are an impressive five pairs of mooring cleats. In fact, moving around the boat generally is easy, with chunky teak floating ‘butcher’s block’ steps with handrails either side gaining access to the flybridge with its outside helm, dinette that converts to a sunpad and even grille, fridge and sink.

This boat has a pair of Volvo Penta TAMD 75 shaft drive diesel engines rather than the earlier TAMD 74P of our original test boat, but the capacity and power are identical, so expect close to the 30 knots we achieved with a brand new and unloaded boat, and a mid 20-knot cruise. 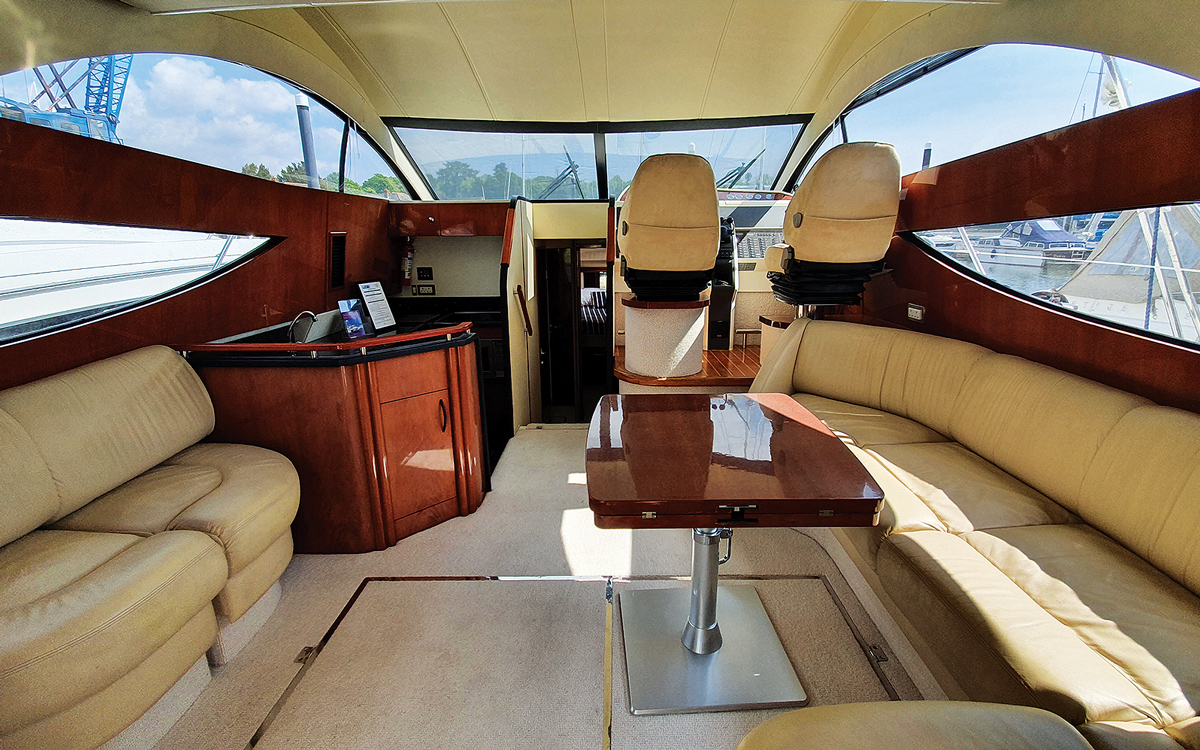 An Olesinski-designed hull that extends beneath the bathing platform, tunnelled props to reduce shaft angle and straight shaft drive all point to the sort of solid, capable seakeeping we expect. But what really stood out on our test was just how responsive the boat was to helm inputs.

A 40ft flybridge is a great cruiser with enough space and clever layout. We review four secondhand boats on the 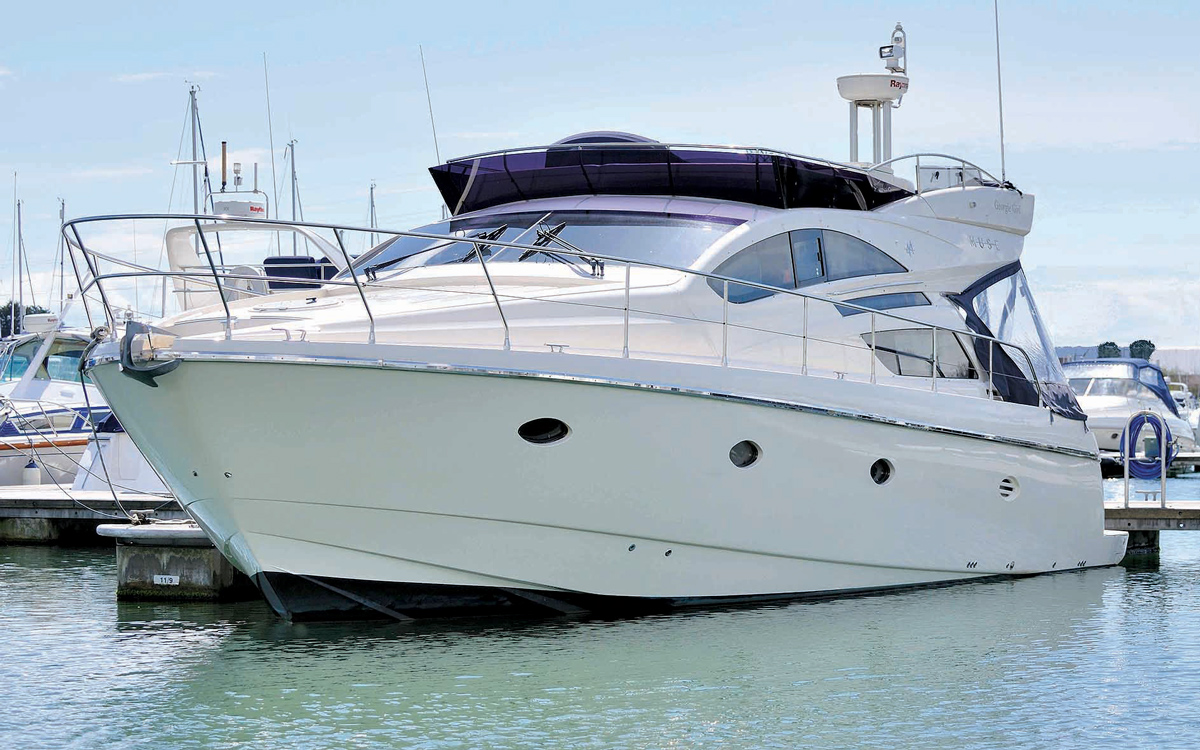 Rodman may not quite have the glamour of Sunseeker or Princess but its ethos is very different. The Spanish company is rooted in the commercial world, building everything from fast offshore patrol boats to catamaran ferries.

Its first forays into leisure craft were offshore sportsfishers, and more recently it launched its now four-strong Muse range of cruisers that combine its DNA of tough practical craft with a far more luxurious finish.

The interior echoes the Rodman 41 that went before it – the yard’s first flybridge cruiser. It’s far more modern though, with a contemporary satin finish to oak woodwork that is stylishly wrought and solidly constructed. The galley is on the main deck, forward to port and the lower deck is a three-cabin, two-heads layout. The builder has managed to squeeze side-by-side beds into both guest cabins, quite a feat in a sub 45ft boat. 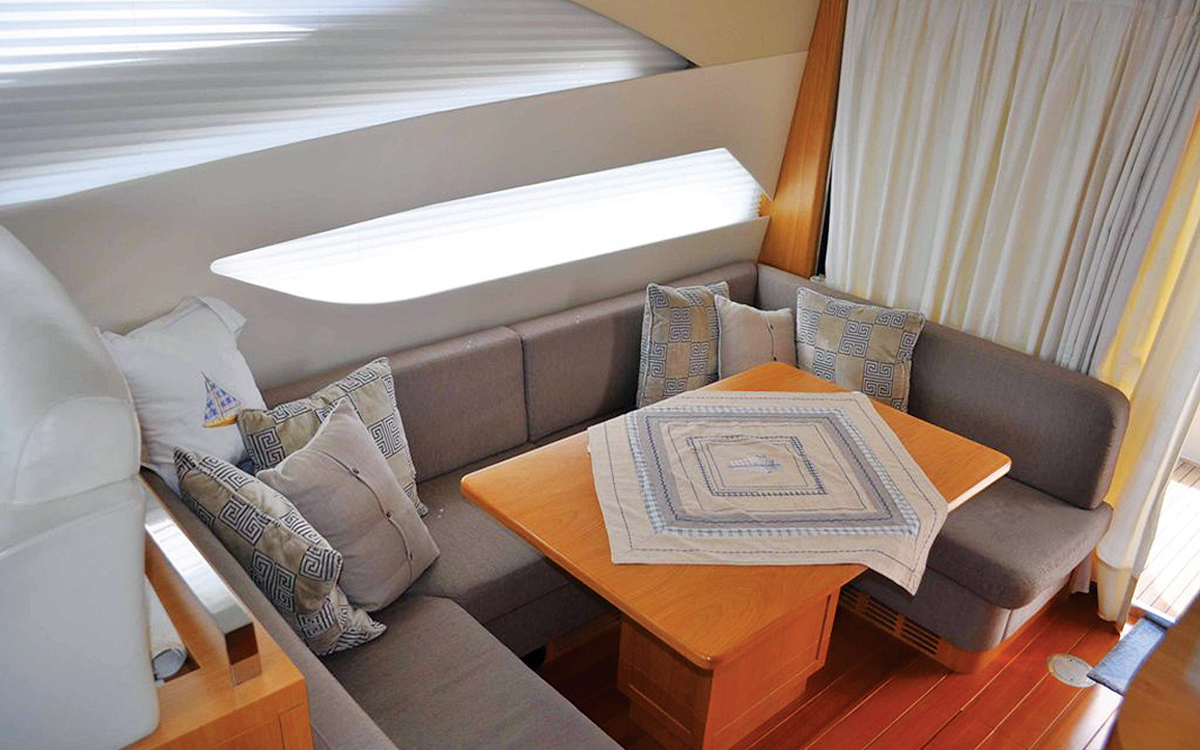 Launched in November 2007, the Muse 44 was designed by Fulvio de Simoni with a bolder style that reflected the builder’s newfound confidence in the luxury sector. The saloon window line is far sharper and more stylish than previous models, the flybridge a lower profile for a sleeker look, and details include thick stainless steel rubbing band and stanchion supports that are superyacht-vertical rather than angled forward like typical motor cruisers of the time. The only downside to that low profile upper deck are the low side coamings, although high rails improve safety. 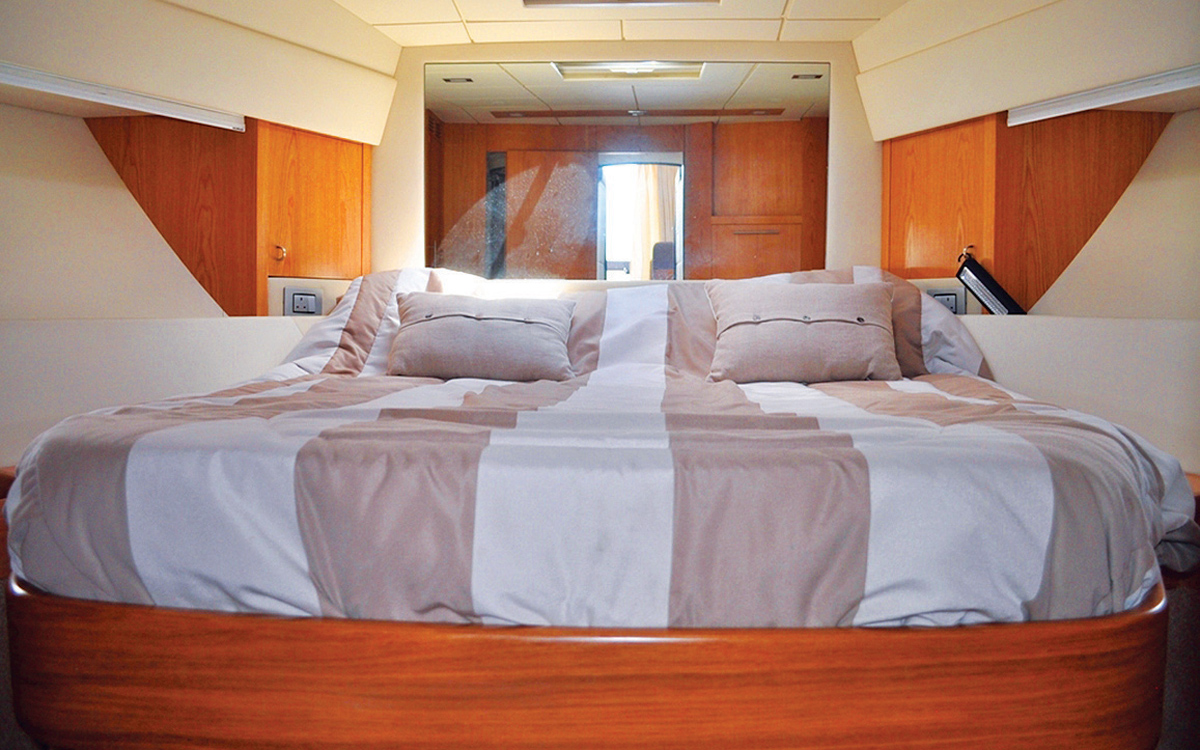 That 24 knots works well from a ride perspective as well, the Rodman Muse 44 feeling solid, if not especially agile in response to the helm. 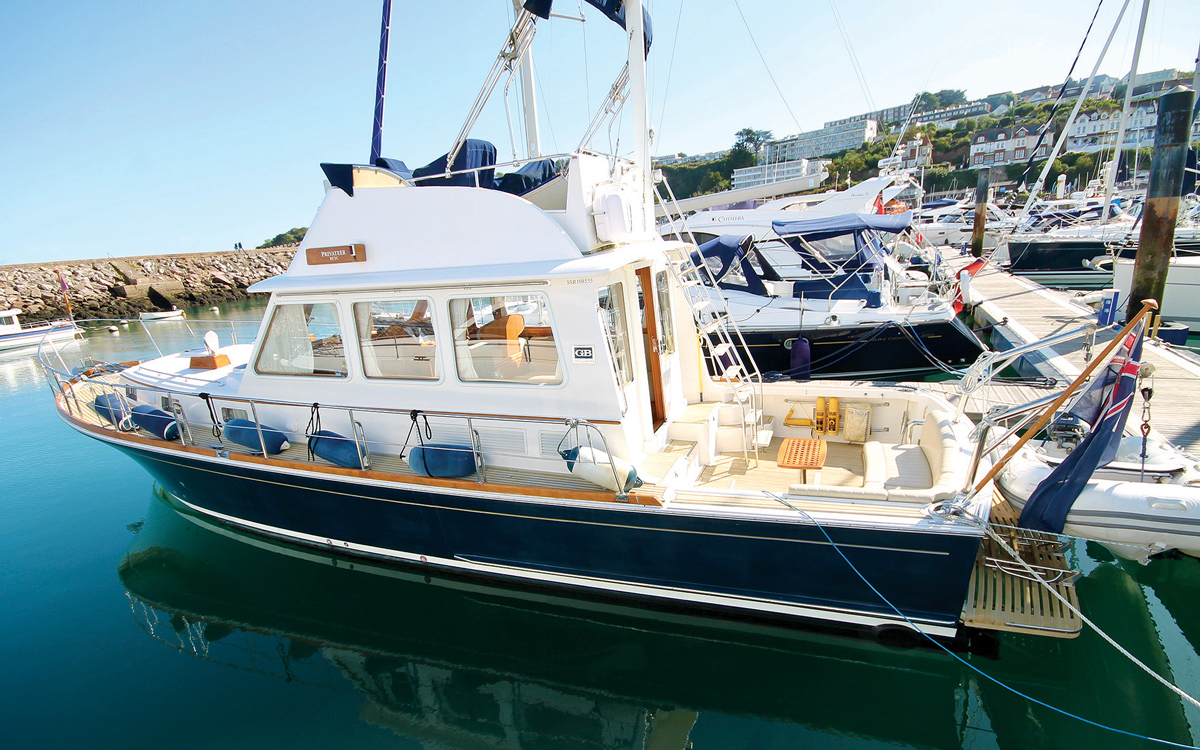 American Marine built its first Grand Banks back in 1966 in Hong Kong. A traditional and very high quality aft cabin trawler yacht, it set a pattern that remained unchanged through a plethora of models for decades. The Eastbay series, built in Malaysia, began in 1995 as a way of introducing stylish (yet still traditional) aft cockpit cruisers to the range that riffed off the Grand Banks reputation for high quality, solid boat building.

Grand Banks is very open to customisation, happy to allow clients to make some fairly substantial layout alterations. It’s why the boat we tested back in 1999 had the galley on the main deck and vee berths in the forward cabin. This particular boat is far more typical of the standard layout, with two cabins (the master cabin forward featuring a double berth) and the galley on the lower deck, freeing up space for a more sociable saloon on the main deck. 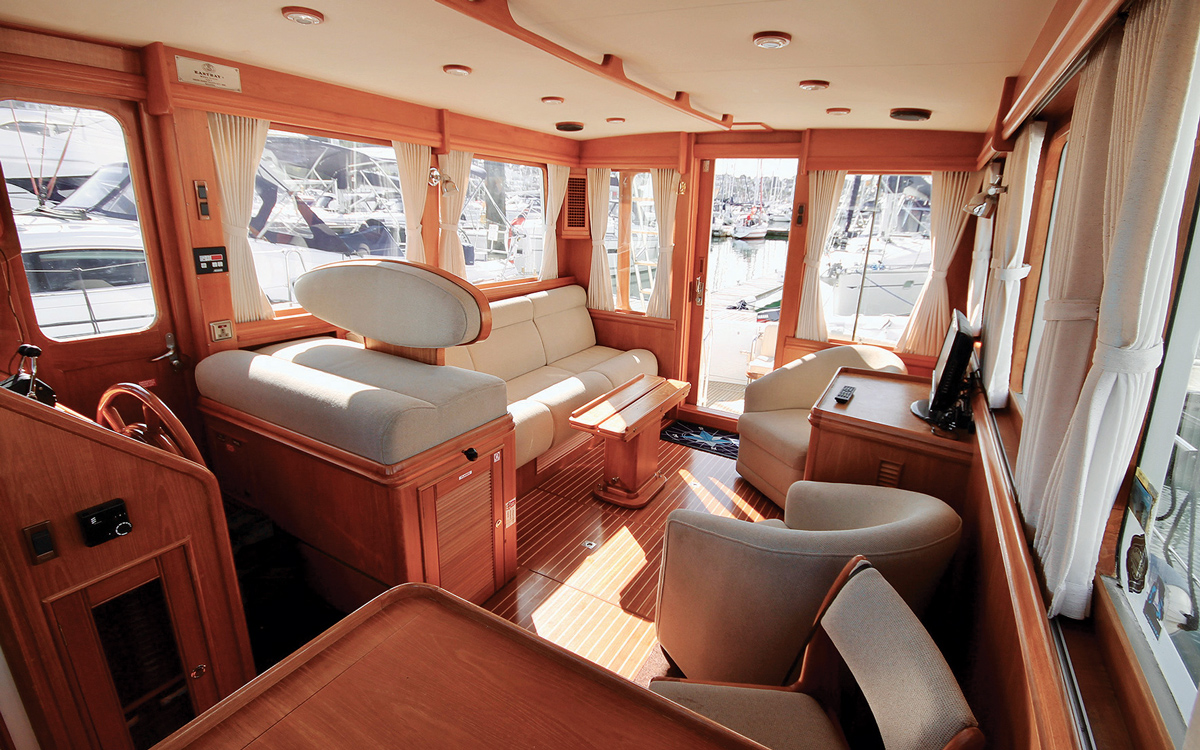 The teak-laid side decks edged by a beautiful sweep of varnished teak toe rail epitomise this boat, just as they do on the traditional Grand Banks trawler yachts – this is a very easy boat to move around on. Access to the flybridge is via a traditional ladder but it’s worth the climb to enjoy the two big captain’s chairs plus further seating on the high sided and well sheltered upper deck.

We achieved 24 knots when we tested the Eastbay 43 but that was with smaller 375hp Caterpillars and imperfect props. This boat has 425hp so expect high twenties. But the reality is that most people will cruise at 20 knots, a pace at which it is very comfortable. 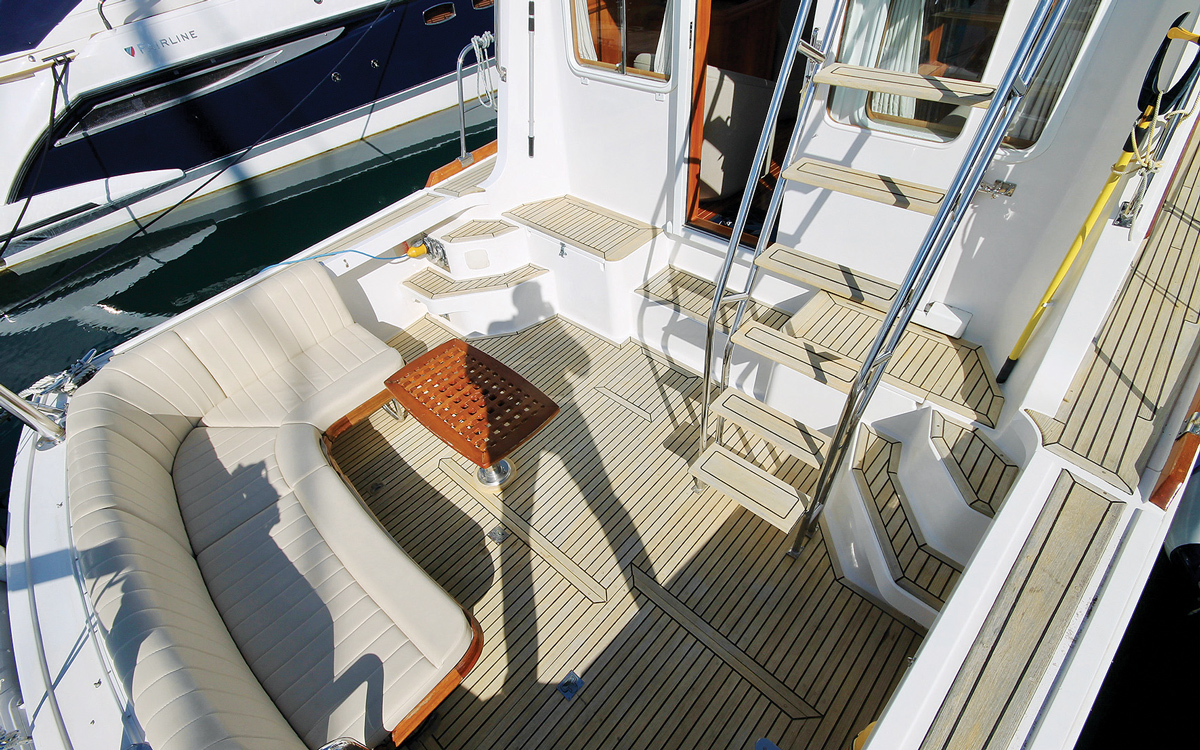 The sunken cockpit is well protected by tall topsides; access to the fly is via a ladder

Ray Hunt was, along with Sonny Levi, credited with inventing the deep vee planing hull concept in the late 1950s and early 1960s, and although he died in 1978, his business C. Raymond Hunt Associates continues to this day and includes Grand Banks in its portfolio. At sea the Eastbay has a reassuringly solid feel with a leisurely motion. 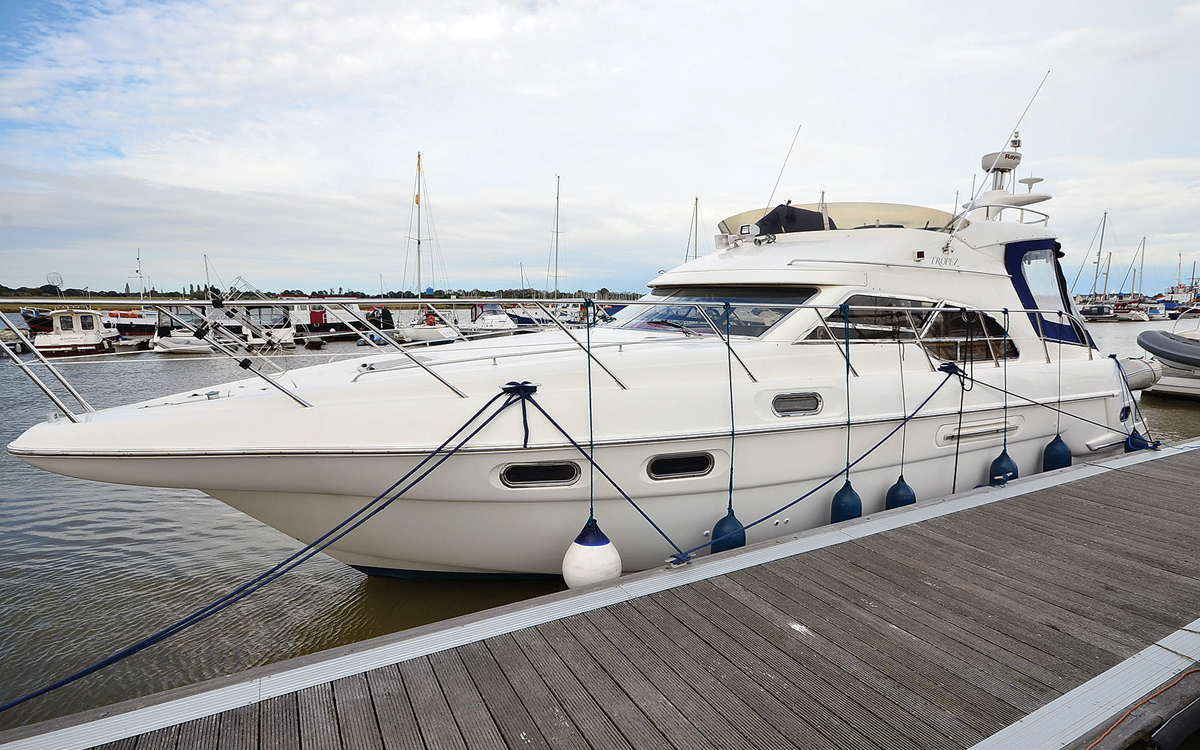 Sealine has never been afraid of coming up with something genuinely different, and the F43 is a case in point. Built between 1998 and 2006, it’s the layout that sets this boat apart.

Where every other manufacturer made its customers decide between an aft cabin boat with its full-length accommodation and huge master cabin but a flat exposed deck above it, or an enclosed cockpit aft of the saloon but accommodation that stopped just ahead of it, Sealine offered both, simultaneously. It was a big success – almost 170 were sold.

The secret to how Sealine managed to create the best of both worlds can be found in that master cabin aft. Unlike most aft cabin boats, the bed was placed with the head at the forward end of the cabin so as you enter, it’s next to you, not ahead of you. Then the headroom directly over the bed was lowered, creating a large well in the deck above and voila, a cockpit and an aft cabin!

It’s even got separate shower and toilet facilities in the aft corners. There’s a large saloon a couple of steps down from the cockpit with a lower helm, then on the lower deck forward you’ll find a decent galley opposite a dinette that can create occasional extra sleeping and a forward cabin with ensuite access to the day heads. 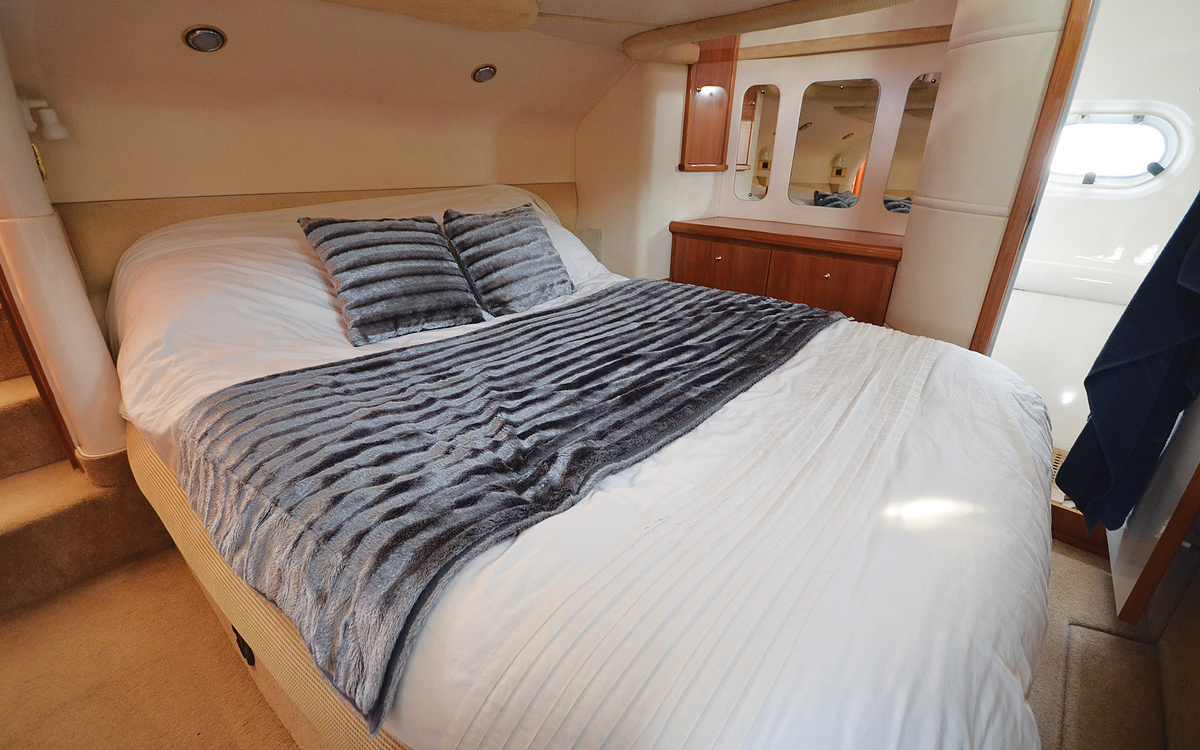 That aft deck/aft cockpit is the defining feature for sure, but there’s plenty more to like. The flybridge is a few shallow steps up and the side decks, though slim to maximise internal volume, have high rails and plenty of non-slip going forward.

Sealine offered a variety of engines, all twin Volvo Penta. 430hp TAMD74Ls or 480hp TAMD75Ps were on the menu, and the last six boats got common rail D6 370hp motors. But by far the most popular were a pair of TAMD63P engines that gave 29 knots with a clean hull when new and a comfortable 22-knot cruise. 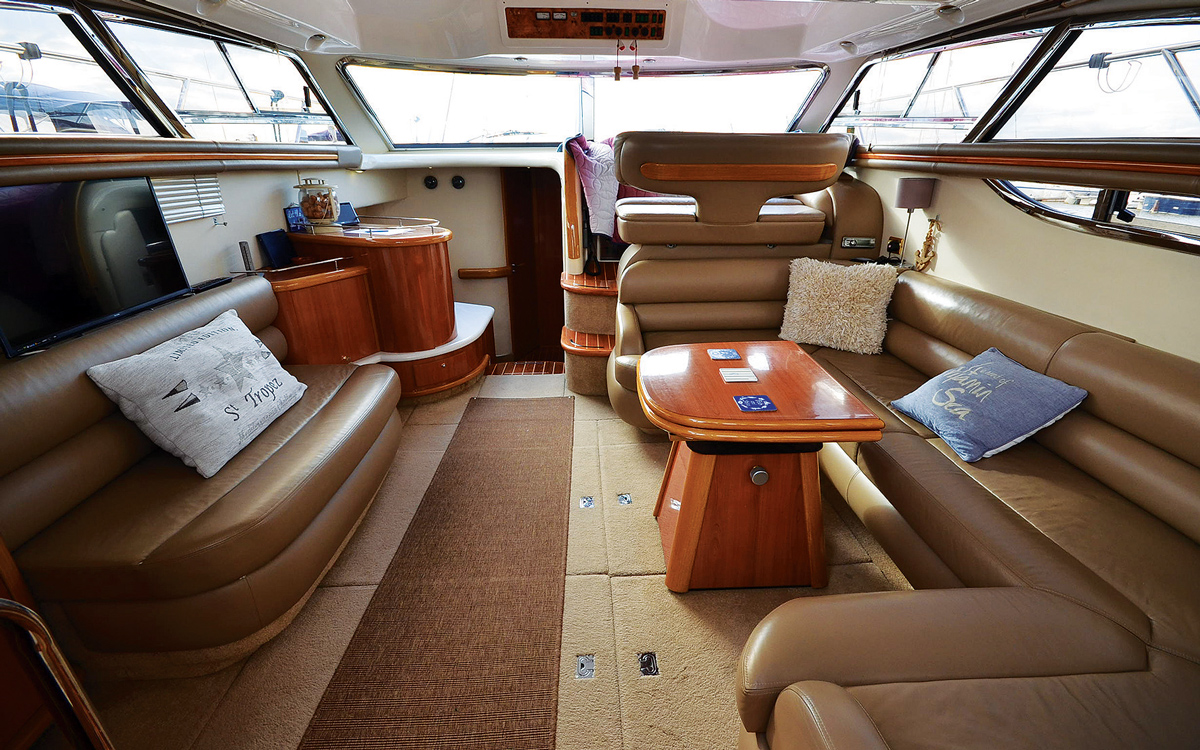 For a big, beamy accommodation-biased boat, the Sealine F43 puts up a decent enough showing out at sea.

First published in the September 2020 issue of Motor Boat & Yachting.

Why the Airkeel stabiliser system could be the next big...