Secondhand boat buyers guide: 4 of the best riverboats for sale

Our resident used boat expert Nick Burnham picks out four of the best riverboats currently offered for sale from the likes of Linssen, Intercruiser, Stephens and Aquanaut...The Wind in the Willows got it right back in 1908, when Ratty took Mole boating for the first time, much to the rat’s dismay. “What?” cried the rat, open mouthed. “Never been in a boat? What have you been doing then?” “Is it as nice as all that?” asked the mole shyly. “Nice? It’s […] This article Secondhand boat buyers guide: 4 of the best riverboats for sale appeared first on Motor Boat & Yachting. 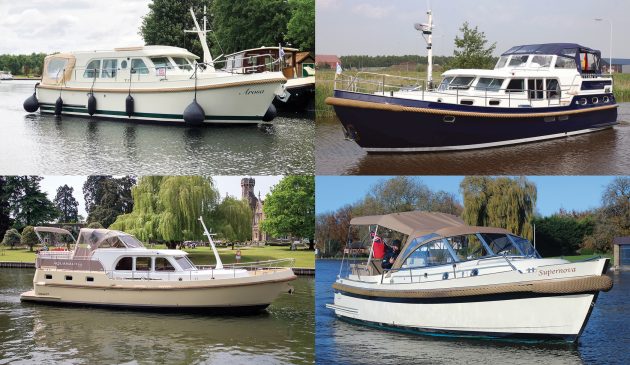 Our resident used boat expert Nick Burnham picks out four of the best riverboats currently offered for sale from the likes of Linssen, Intercruiser, Stephens and Aquanaut...

The Wind in the Willows got it right back in 1908, when Ratty took Mole boating for the first time, much to the rat’s dismay.

“What?” cried the rat, open mouthed. “Never been in a boat? What have you been doing then?”

“Is it as nice as all that?” asked the mole shyly.

“Nice? It’s the only thing,” said the water rat solemnly. “Believe me, my young friend, there is nothing – absolutely nothing – half so much worth doing as simply messing about in boats.”

If you fancy joining in the fun, there are worse places to do it than on the river (based, as the book was, on the River Thames), and here are four great inland boats in which to mess about.

That said, all four of them also have the scope and capability for sea passages if you can live with their relatively slow displacement cruising speeds. 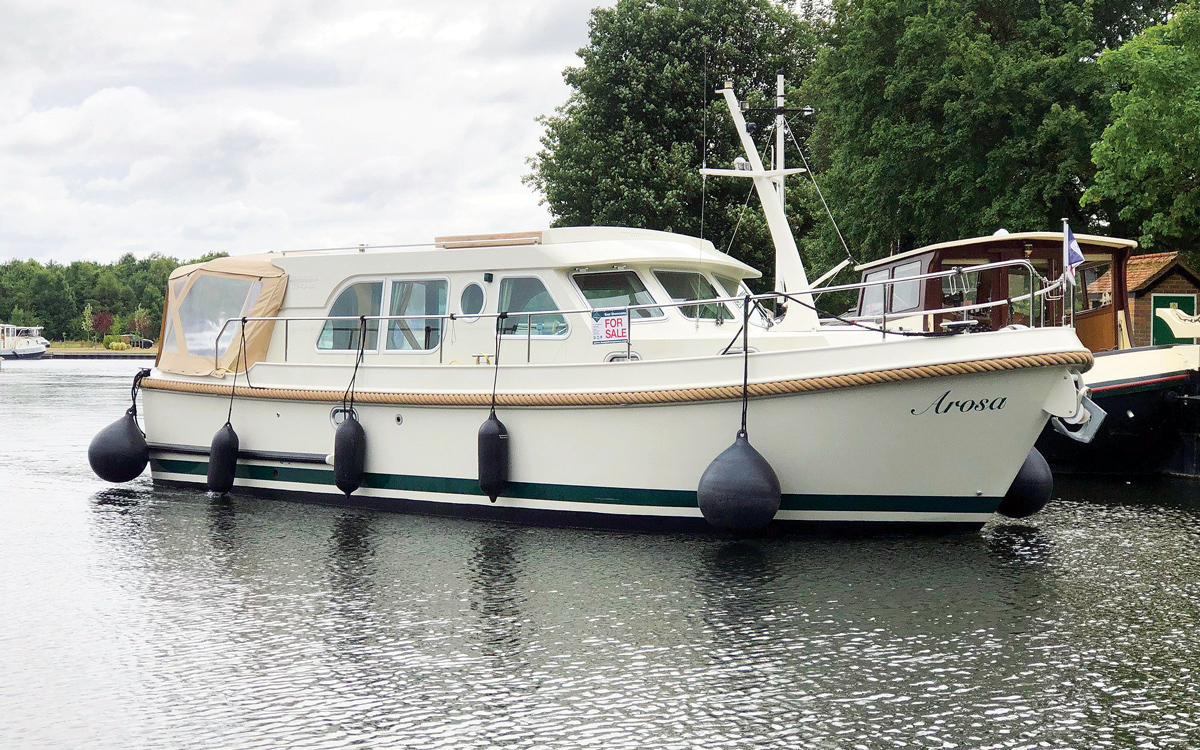 Based in Maasbracht, Holland, Linssen Yachts was originally set up by Jac Linssen as a small-scale woodwork and ship repair business. Over the years it developed into a significant steel yacht building yard with a strong reputation for high quality motor cruisers.

Family run from the beginning, it’s now into its third generation and builds boats from 30-50ft. The Linssen 34.9 was available in two versions, an aft cabin cruiser or a Sedan, which features an aft cockpit and reduced air draught, enabling it to slip underneath lower bridges.

Double doors lead into a very high quality interior lined in classic cherry wood. The galley is on the port side, opposite a dinette that features an ‘Easy Sleep Convert System’ that allows it to be quickly converted into a slatted double berth for occasional guests.

Intriguingly, there’s a small desk area ahead of the dinette opposite the helm position, complete with club chair. Head down to the lower deck and you’ll find the heads on one side, shower on the other and a central double bed in the fore cabin. 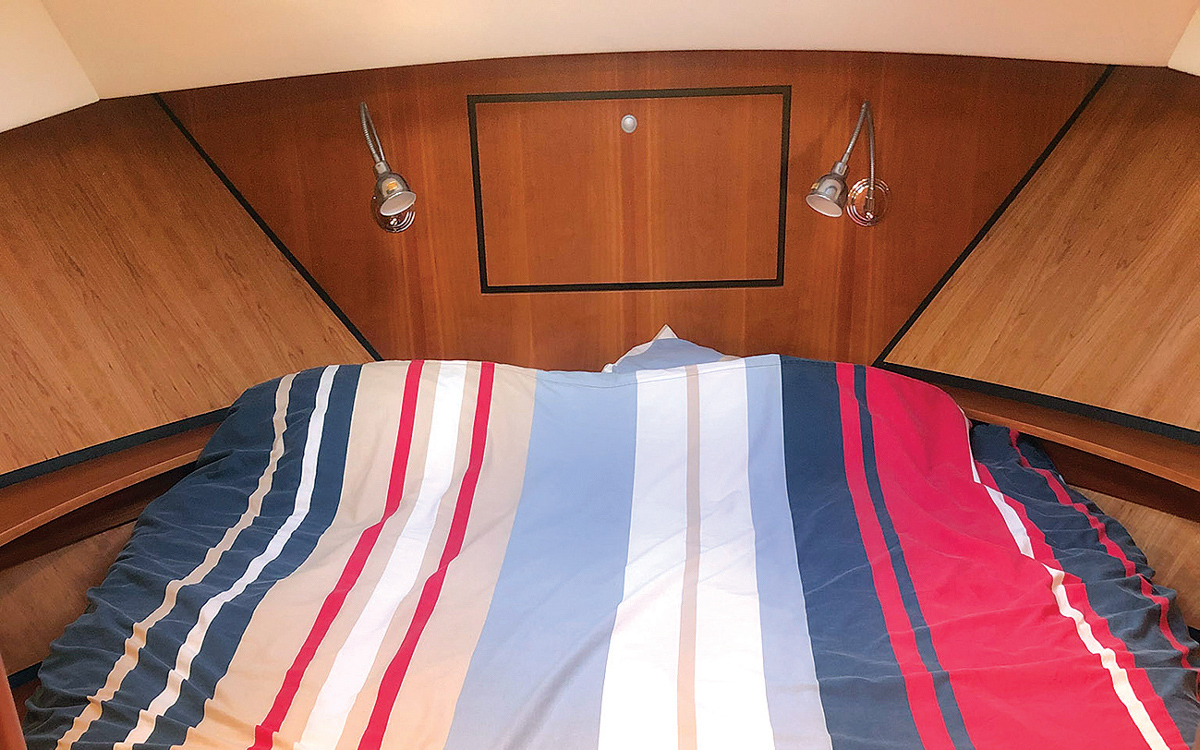 The Linssen 34.9 Sedan has only one dedicated sleeping cabin but the settee in the saloon also converts to a bed

Unlike the aft cabin variant with its raised aft deck, the Linssen 34.9 Sedan has the cockpit on the same level as the saloon. Protected by a large framed canopy, it extends the living area even in inclement weather. On better days, drop the canopy and slide back the roof section over the helm to enjoy the fresh air and sunshine.

A heavy and strictly displacement speed boat, don’t expect fireworks from the Volvo Penta D2 75hp. However, it is a very quiet riverboat with a top speed of 10 knots. 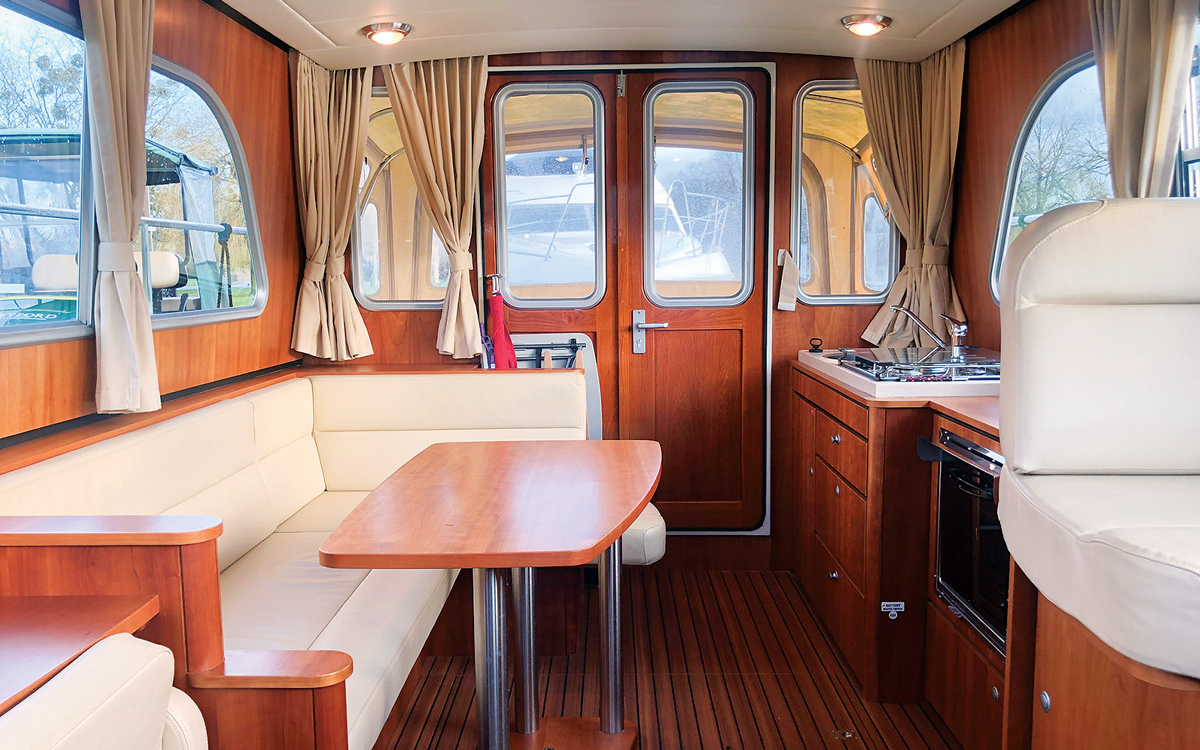 There’s not much seakeeping to be done inland, but given the low speed and steel construction you can expect your gin and tonic to be stirred but not shaken. 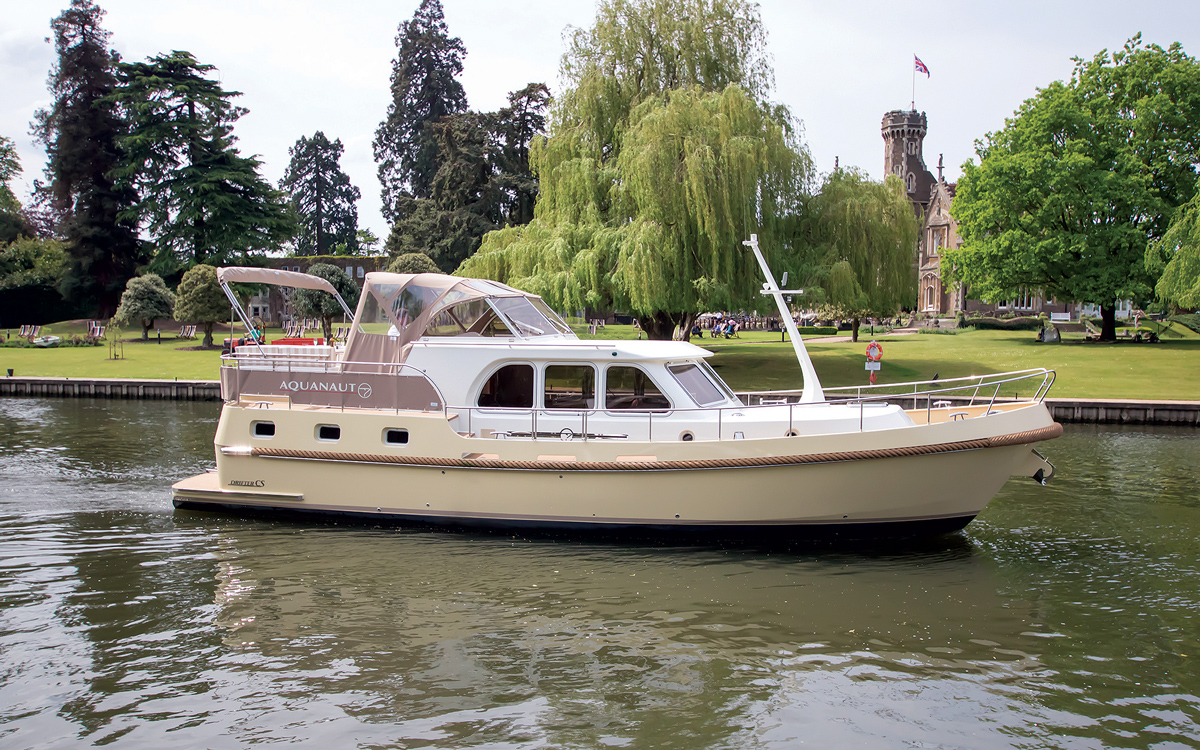 Dutch builder Aquanaut is proud of the level of customisation it offers. Because steel boats don’t require the inflexible moulds and fixed structural bulkheads of GRP craft, the company is free to do whatever it wants within reason.

As UK boat dealer (and vendor of this boat) TBS Boats once told me, “With a steel boat you don’t require new mouldings to make fundamental changes, all you need is a good CAD designer and plenty of imagination. All of the Aquanauts we’ve supplied have basically been bespoke builds; no two have been the same.”

Aquanaut Drifters are available in both aft cabin (AK) and aft cockpit (AC) layouts. European Voyagers are aft cockpit flybridge variants and the Privilege range are the same below the waterline but with softer sexier styling. So the AK designation of this model highlights the huge aft master cabin with separate ensuite toilet and shower compartments.

Guests are taken care of at the opposite end of the boat via vee berths in the forward cabin. A very generous galley, also on the forward lower deck, has a dinette opposite. Up on the main deck you’ll find a large saloon area. 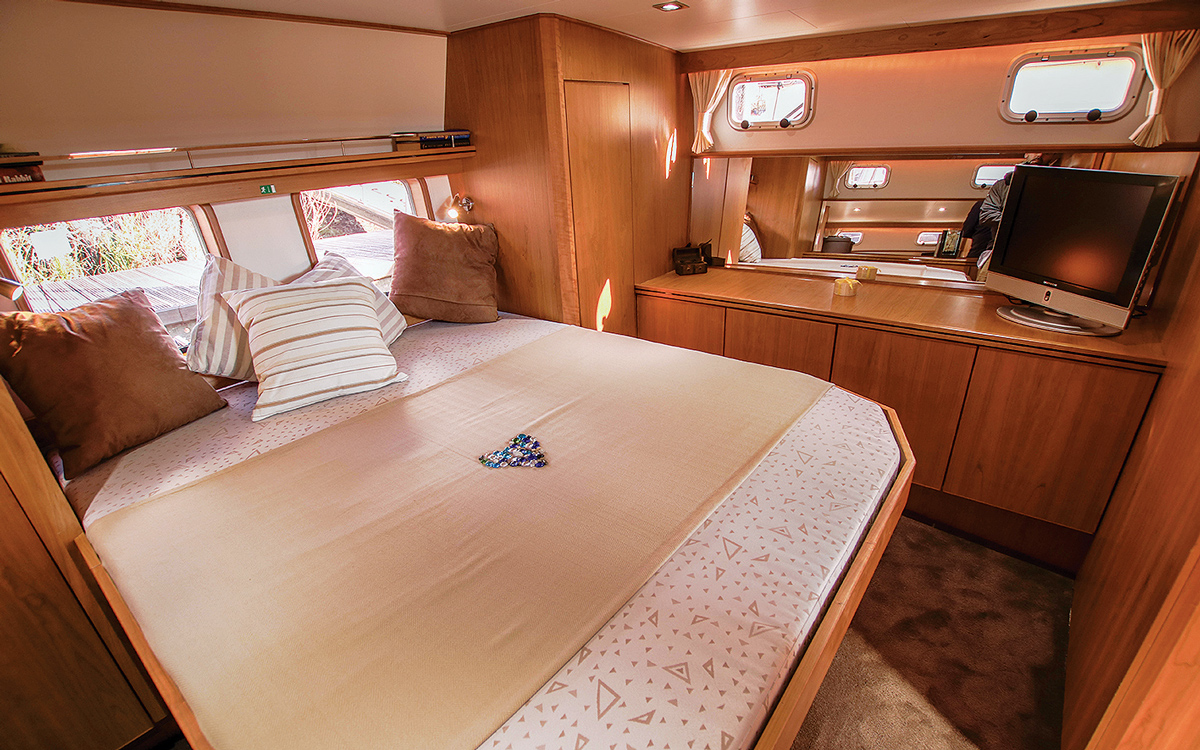 Step up and aft from the saloon to find yourself on a massive aft deck above the master cabin. The single helm is here with a pair of comfortable captain’s chairs and there’s a large U-shaped seating area behind it around a table. Decks are wide and flat. The windscreen is hinged, allowing it to fold to reduce air draught for low bridges.

Expect about 8 knots from the single Perkins 148hp diesel, which allows easy river speed cruising of between 4-6 knots. 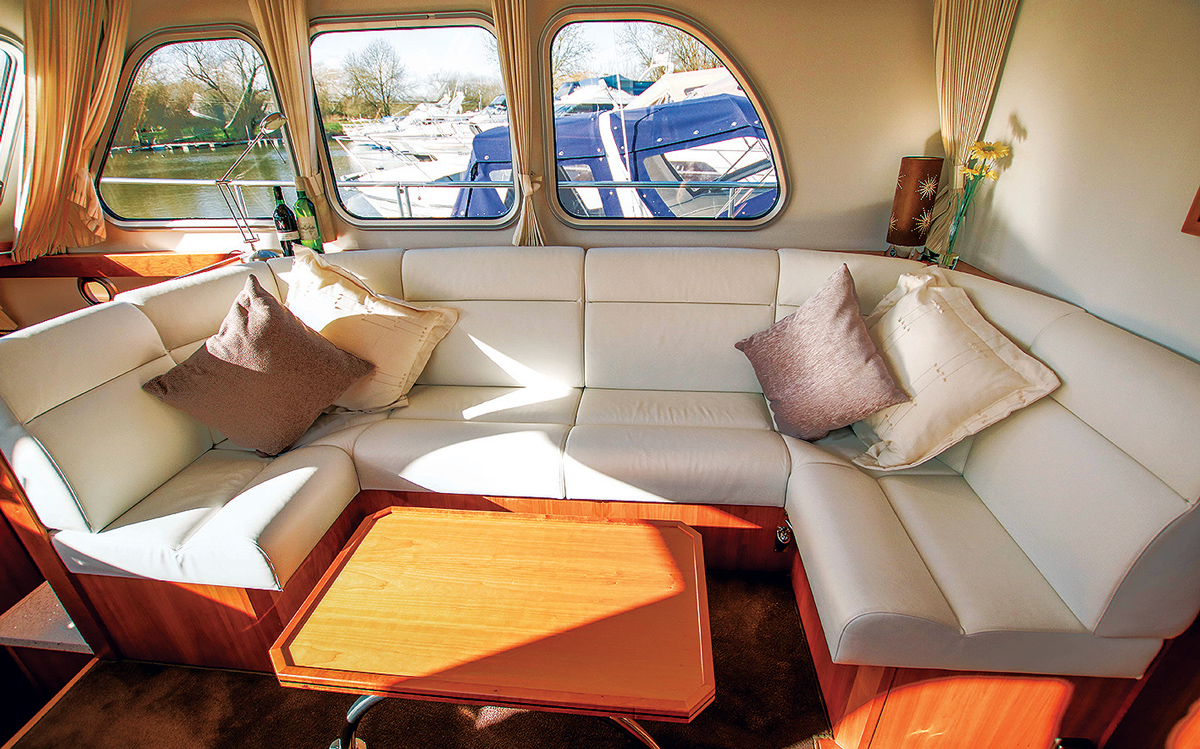 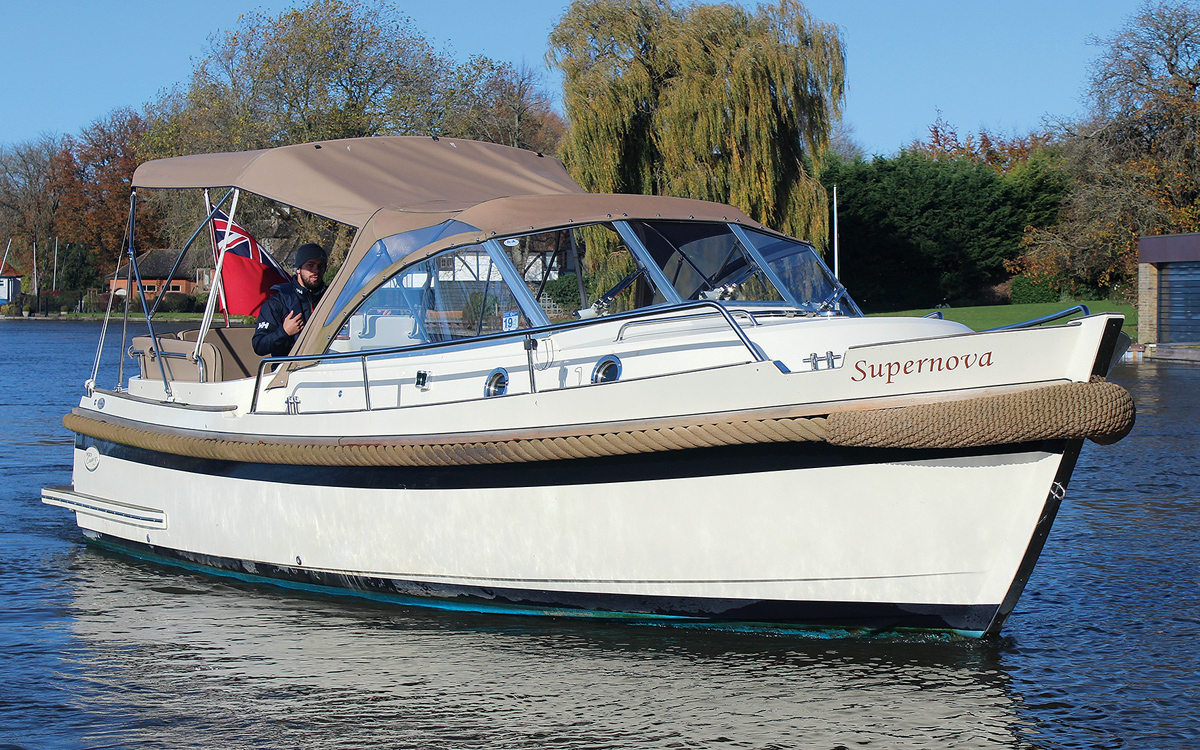 Another riverboat, another Dutch builder. Interboat is a small family business employing about 50 people and building boats from 21ft through to 34ft. Its smallest are the Intertender and Interboat models – the 27 is the smallest of its luxurious Intercruiser range.

Designed very much as an open dayboat, the 27 Cabin does, nonetheless, have a small sleeping area and toilet in the bow. A discreet door right at the front of the cockpit drops you down to a lower level with a toilet compartment through a further door ahead of that.

On either side, a single berth burrows back beneath the cockpit seating allowing two to sleep. It might not be ideal for a week on board, but overnighting is possible, and an afternoon nap a definite. 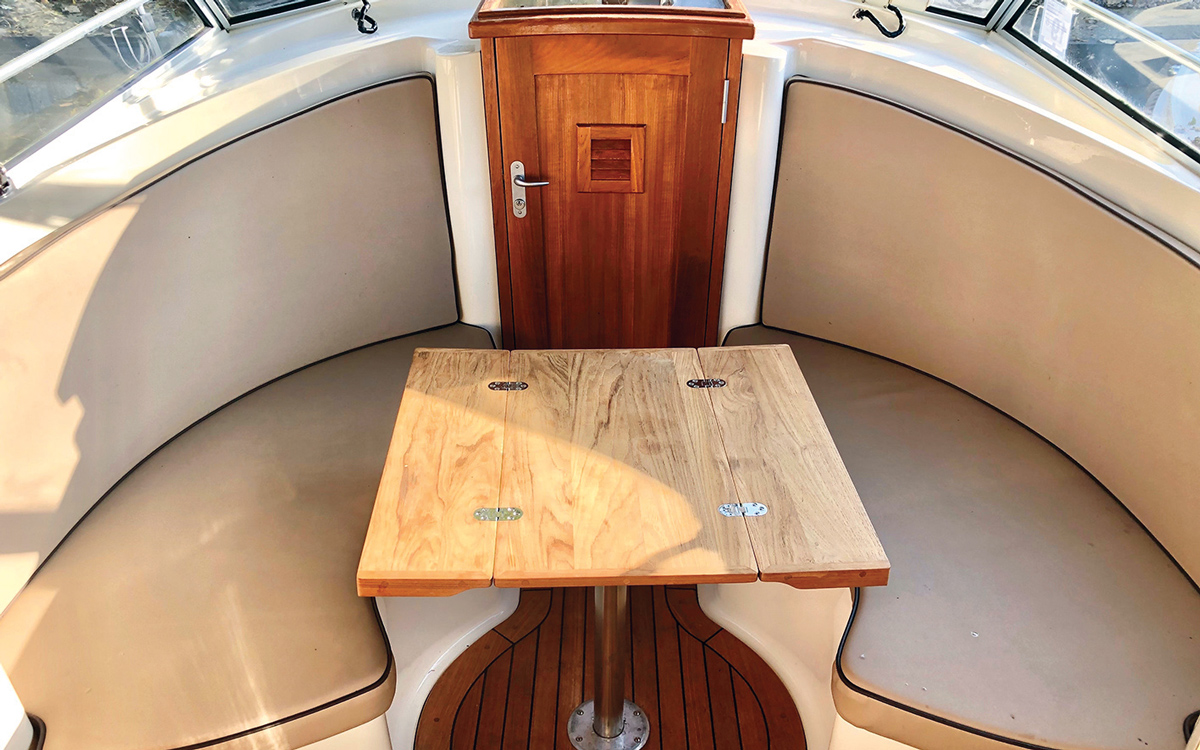 Most of the boat is cockpit, with enough space for 10 people. It’s a ‘sloop’ configuration, which is the Dutch term for a boat with the helm right at the back like a sailing boat. It works well for idle river pottering, allowing the helmsman to engage and chat with his or her guests rather than being at the front with everyone else behind.

Ahead of the helm is a small galley unit with a stove and sink while a fridge drawer can be found beneath the seating. An optional upgrade on this boat is the fitted windscreen forward and adaptable canopy system.

A four-cylinder Vetus diesel engine puts out 52hp, giving a top speed of 8 knots and allowing cruising anywhere between 3–6 knots. Interboat will actually fit these with anything between 22hp and 170hp, the latter giving about 18 knots and intended for coastal work – unleashing all 170hp on the upper Thames might raise an eyebrow or two! 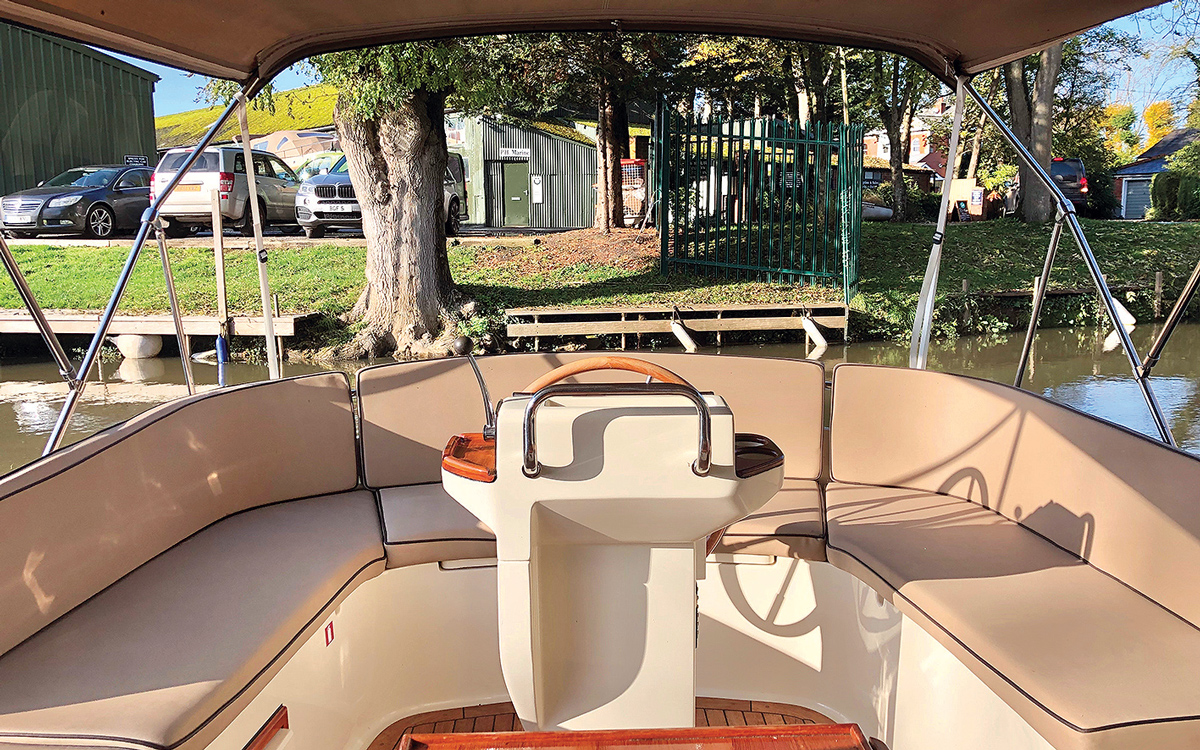 Although built for inland cruising, the 27 Cabin has plenty of scope for coastal running provided that (just like any other boat) conditions are right. 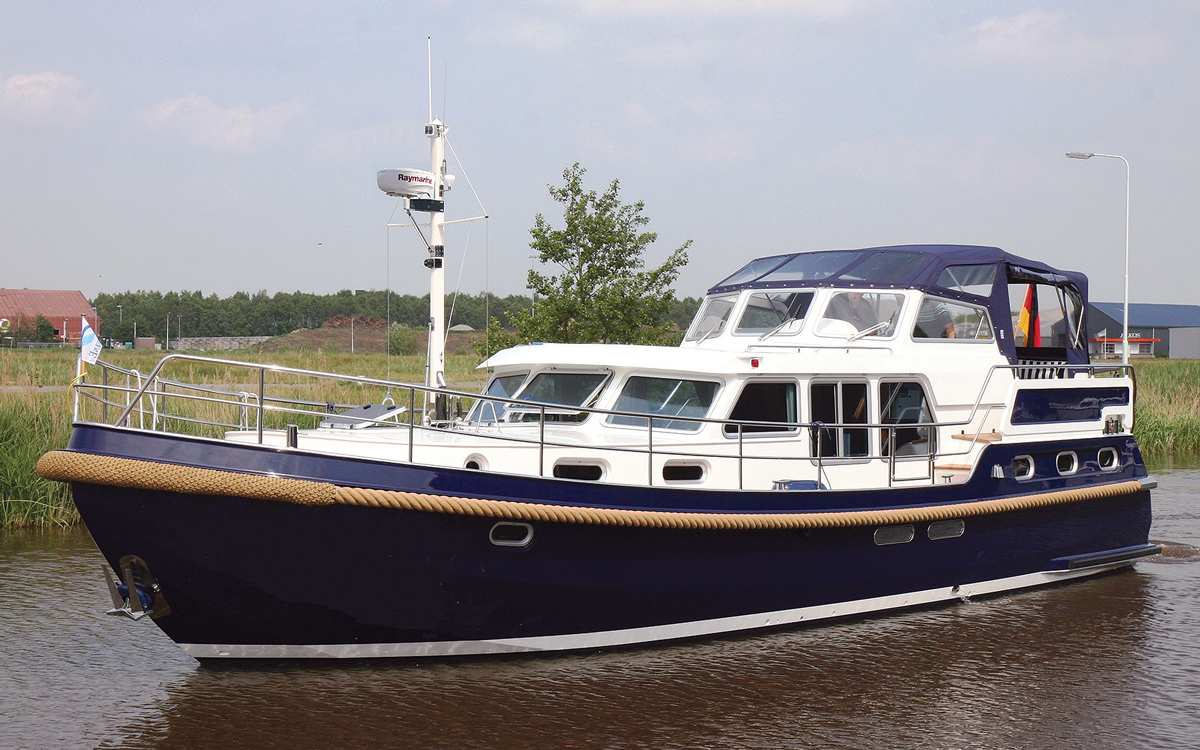 Taking customisation to a new level, UK Stevens dealer Karl Farrant Marine Sales regards the brochure as little more than a ‘suggestions’ guide. Want an inch more headroom or three inches off the LOA when you order a new boat? You got it.

As a result, no two boats are the same. The Dutch-built boats are actually called Smelne in other countries; Karl adopted the name Stevens for the UK as he felt Smelne didn’t translate well!

All Stevens boats are available with either an aft cabin and a raised aft deck or aft cockpit on the same level as the saloon. This is the former. The standard layout is an offset double forward and a dinette opposite the galley but this owner has opted for vee berths forward and lost the lower dinette in favour of a massive galley that utilises both sides of the lower deck.

With no inside helm, the saloon on the main deck is a great size too, and the master suite occupies the lower deck beneath the raised aft cockpit. 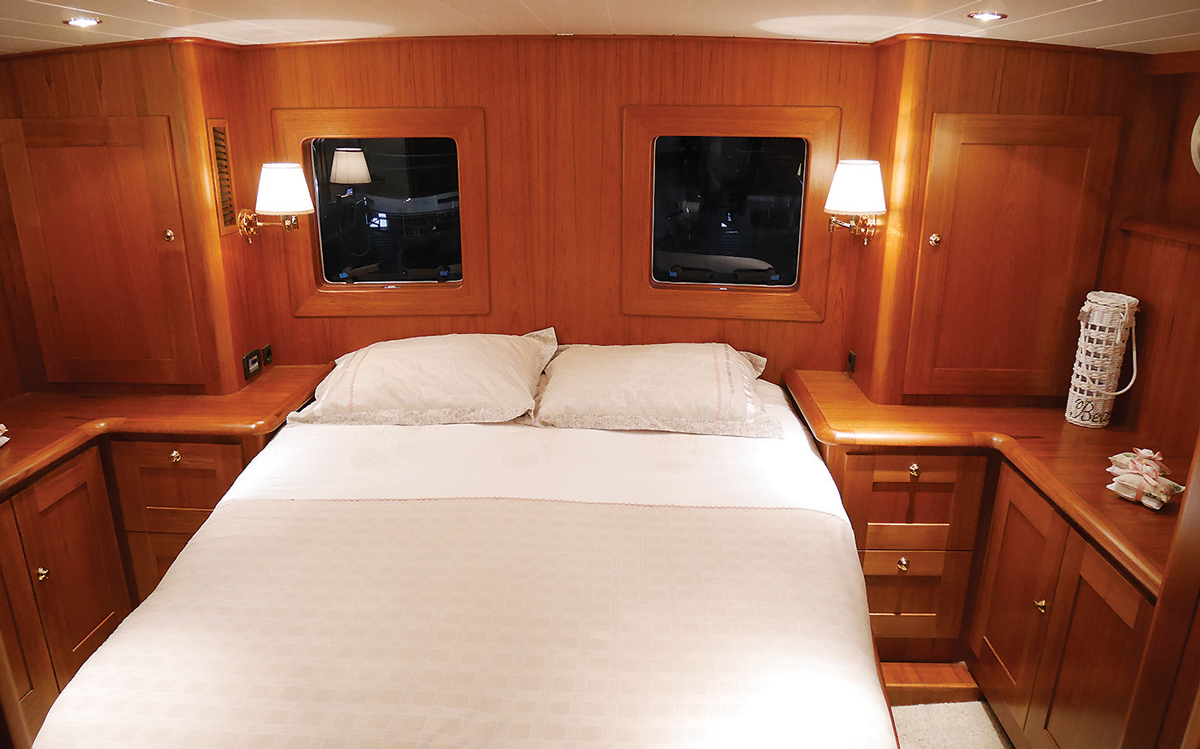 The 13 refers to the fact that this is a 13m boat. The second half of the numerals refers to the transom arrangement. Versions include 1300, 1350, 1395 and so on, and buyers can opt for a flat transom with no platform, a large platform with sweeping staircases either side or anything in-between. The full beam aft deck houses the helm, with canopies providing weather protection.

Volvo Penta, Perkins or Vetus Deutz in single or twin engine format were offered. Twin engines don’t give more performance but do give offshore back-up reassurance. This boat has a pair of Vetus Deutz DT44 114hp engines which give about 10 knots. 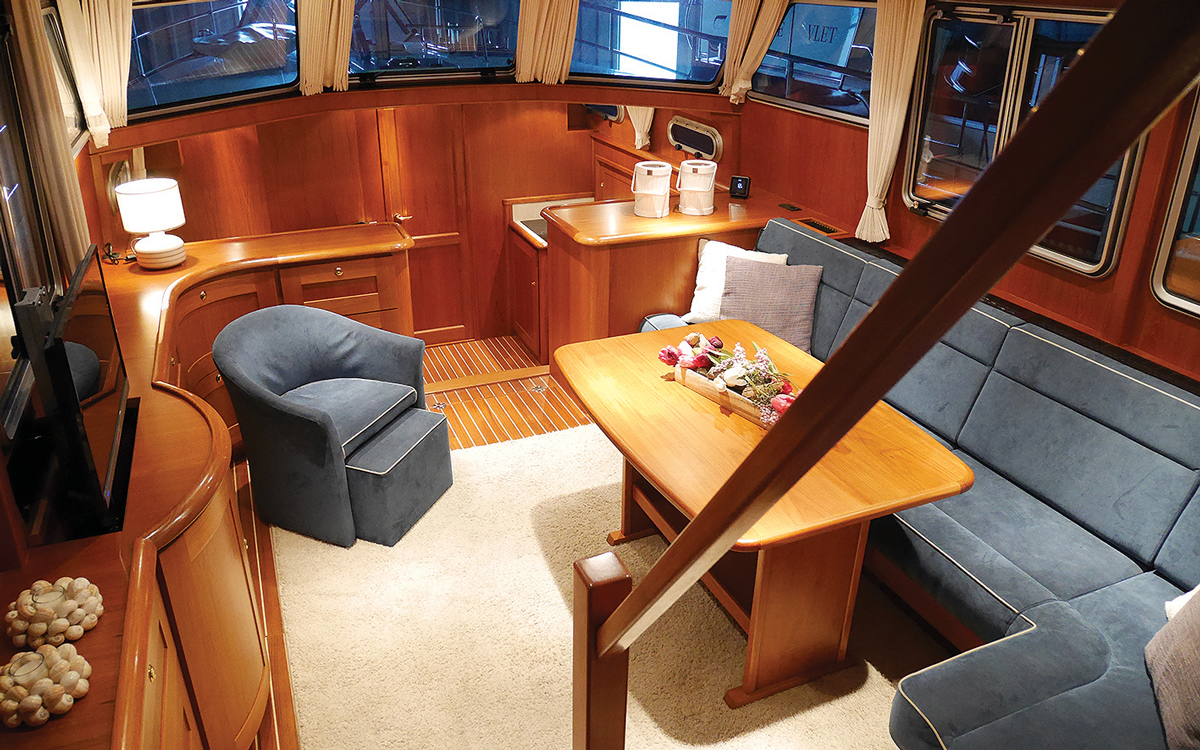 Vlet in the title refers to the hull shape, which is multi-chined rather than a flat vee, creating additional internal volume low in the hull for more space and a lower centre of gravity for greater stability, improved further by the Magnus Master stabilisers. The result is a very capable sea boat.

First published in the November 2020 issue of Motor Boat & Yachting.

Falmouth marinas: Our essential guide to finding the best berths in Cornwall