A new owner of this home in Springville, UT, won't have to venture far to knock back a beverage in an Old West saloon. It has a replica ghost town out back. The post Small Utah Home Has Handbuilt Replica Ghost Town in the Backyard appeared first on Real Estate News & Insights | realtor.com®. 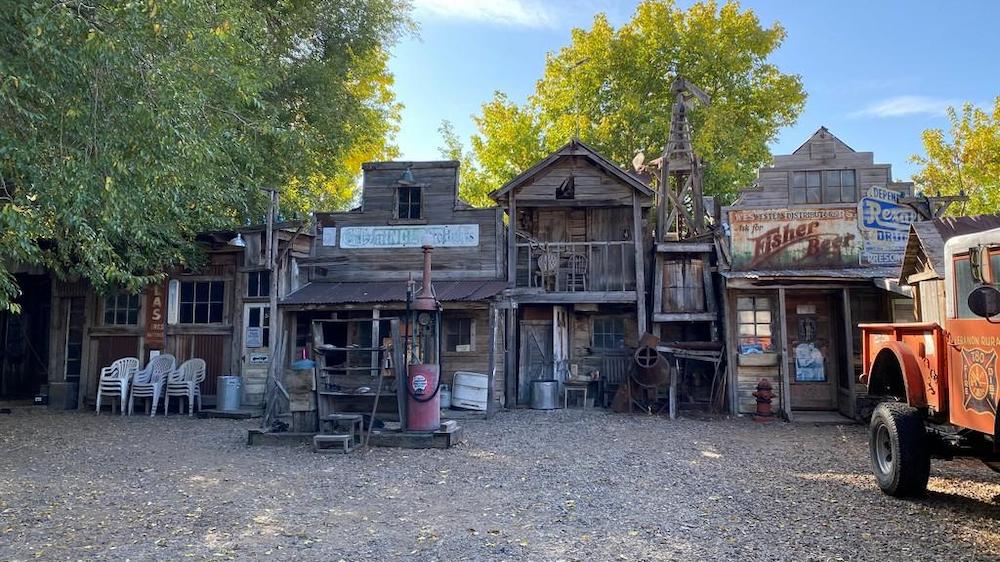 A new owner of this small house in Springville, UT, won’t have to venture far to knock back a beverage in an Old West saloon.

The father of the listing agent, Angie Brandt, built the ghost town over the 27 years he owned the property. She had the full scoop on how the replica of the Old West came to be, and on her dad’s role in creating this throwback town.

“[The home] was just a little old cottage built in 1947, and it had a five-bay garage storage unit in the backyard,” she says. “The garage was just plain cinderblock.”

With reclaimed barn wood and salvaged buildings that were about to be demolished, he built facades on the front of the storage unit.

Mike Patrick passed away in August, and Brandt says he would be smiling at the interest in his creation.

The hub of the ghost town is the saloon.

There’s a player piano and pool table and a bar, Brandt explains. The refrigerator is behind wood doors, with the modern appliances hidden out of the way.

“We used it for entertaining for many, many years, and had Halloween parties and Christmas parties,” she says. “For any family get-togethers, we were always at my Dad’s to use the saloon area.”

Like any responsible saloon owner, Patrick also had sleeping spaces for anyone who wanted to stay overnight. All the furnishings are part of the sale.

The last two bays of the garage are currently configured for woodworking or automotive restoration, two other passions of Brandt’s father.

“He was always a creative person. He could look at junk from thrift stores and he would change it into something amazing,” Brandt says.

He used his time, she says, to create fun places for people to be.

“People would come and take graduation photos or wedding photos,” she says. “He was always kind and sweet, and would allow those people to come in and just make themselves at home and pose for pictures.”

Aside from the replica town, the main house offers two bedrooms and one bathroom.

Even though the house is small, Brandt says, her father found ways of utilizing space, with ample storage.

The property, at a half-acre, is larger than others in the area. Brandt says its yard, with an additional lawn and a garden with an outdoor kitchen and mountain views, is very quiet and visited by deer.

A sale on the property is pending, and Brandt says she has high hopes for its future.

“A perfect buyer for this property would be someone that wants to enjoy what my dad created and maybe add to it,” she says.

She hopes that the buyers will call one day and report that they’ve made some new additions.

“There’s so much potential for the property,” she says. “It’s already awesome the way it is, but there’s great potential to add more.”

Home Price Growth Slowing Down, but Not Dropping—at Least...

Two landlords and 800 students square up over rent waiver...

For Some, Mortgage Forbearance Could Make It Harder To...