Some Neandertal genes may up the risk of severe COVID-19

Most of the affected people descend from communities in South Asia or live in Europe today. 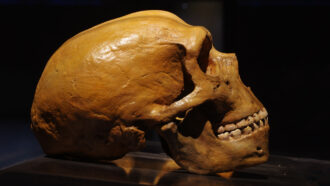 Many people carry a little Neandertal DNA. But not all inherited the same bits of it. In some people, one of those bits may raise their risk of developing severe COVID-19. That’s the finding of a new study.

Explainer: What is a coronavirus?

A short while ago, researchers linked an increased risk of getting severely ill from COVID-19 to one version of a stretch of DNA on someone’s chromosome 3. Affected people also were more likely to need to go to the hospital than people with a different version of that DNA.

Humans interbred with Neandertals more than 50,000 years ago. Even today, some DNA inherited from those Neandertal ancestors can affect immunity and other features of human health. Svante Pääbo leads a large group of scientists who are trying to understand the function of those Neandertal genes. “Neandertals are not totally extinct,” he told Science News. “They live on in some of us.”

Knowing that, he and a colleague recently looked to see if Neandertals and other extinct human cousins — Denisovans — share that risky part of chromosome 3.

Hugo Zeberg was the other member of that team. “I fell off my chair,” Zeberg now recalls, after seeing the data. “It was really a surprise to see that the genetic variants were exactly the same as Neandertals’.”

About half of all people whose ancestors come from South Asia — especially from Bangladesh — carry this bit of Neandertal legacy, this new study notes. So do about 16 percent (not quite one in every six people) in Europe today.

Tracing the genes back to Neandertals

The risky DNA was identified as a COVID-19 danger zone. It turned up in what are known as genome-wide association studies, or GWAS.

People carry genes that may be slightly different. These are known as variants of a gene. Often the variants all do the same things. But sometimes, one variant may be better or worse at doing some job. GWAS analyses use statistics (fancy math) to find genetic variants that show up more often in people with some disease. Here, the researchers compared people who have milder forms of COVID-19 to those sent to the hospital with this infection.

The stretch of chromosome 3 contains many variants that are almost always inherited as a set. Such an inherited group is known as a haplotype. Those variants may not themselves lead to severe COVID-19. They do, however, point to the genetic neighborhood where the risky genes might sit. The researchers are now working to find the culprit genes, Zeberg says.

The risky haplotype contains 13 genetic variants. Eleven of them were found in DNA from a 50,000 year-old Neandertal woman. Her remains turned up three years ago in a cave in what is now Croatia. Three of the variants also showed up in two Neandertals from the Altai mountains of Russia. Denisovan remains contained none of the variants.

Most non-Africans carry some Neandertal DNA as a relic of ancient interbreeding. But getting the haplotype now being linked to risk of severe COVID-19 was patchy. It didn’t get passed down in East Asia. Still, people with South Asian ancestry were more likely to carry the Neandertal legacy.

Almost two in every three people in Bangladesh (63 percent) have at least one copy of this haplotype. Thirteen percent (almost one in every eight) have two (with one copy of each inherited from mom and dad). Their Neandertal DNA may partly explain the increased deadliness of COVID-19 in these people. Those of Bangladeshi origin living in the United Kingdom, for instance, are twice as likely to die of COVID-19 as are people of other backgrounds living in that country.

These data offer “an important lesson about genetic variation: What’s good in one place can be bad in another place,” explains Tony Capra. He’s an evolutionary geneticist at the University of California, San Francisco

Answers to your questions on the new coronavirus

In Bangladesh, the haplotype may have given people a health advantage. For instance, it might have helped them fend off other infections, such as cholera (KAAL-ur-ah), Zeberg says. Such an evolutionary advantage would have allowed these genetic variants to increase in frequency. That might happen, for instance, if more people with the Neandertal variant survive a disease and pass the DNA on to their kids. In East Asia, these variants might have hurt someone’s ability to fight other illnesses. Over time, those variants might have died out there.

The results don’t mean that carrying Neandertal DNA will make COVID-19 patients become gravely ill. It also doesn’t mean that lacking it will protect them. East Asians generally have more Neandertal DNA than other groups, yet still didn’t inherit this risky haplotype. And thousands of people in China and other parts of East Asia certainly died of COVID-19. Meanwhile, people of African descent have little to no Neandertal DNA, yet Black Americans are among those at highest risk of dying from COVID-19. Their risks often are due to things that could have little to do with their genes.

Capra stresses that “with COVID-19, there’s a genetic component that is important.” But social and other factors can be “so much more important in determining risk and severity,” he adds. Consider age. The elderly are far more likely to be hospitalized or die when they get COVID-19. Young children, in contrast, face the least risk from this disease.

A bit of stress may help young people build resilience

American crocs seem to descend from kin that crossed the...