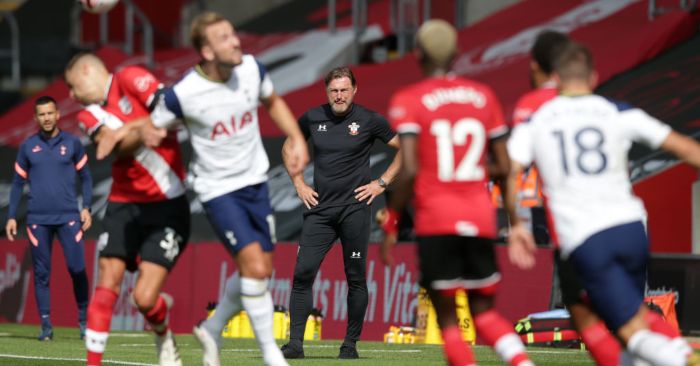 By the time Son Heung-min had rattled in his fourth goal and Harry Kane had poached one of his own on Sunday afternoon, pundits and Twitter experts alike had furiously spewed out countless bits of advice about Southampton’s high defensive line in to Tottenham.

Indeed, the signs were there from the third minute when Son, who played the ball that led to Kane’s disallowed goal, was ushered through like some sort of VIP being shown to his booth in a swanky nightclub. On this occasion, the South Korean was fractionally offside – but he wouldn’t prove as polite the next five or six times the Southampton defence afforded him such space.

Nonetheless, the frenzy over coach Ralph Hasenhüttl’s employment of a high defensive line, as well as his own supposed naivety in not changing things when it was going so horrifically, has been wildly exaggerated. Hasenhüttl himself dismissed criticism of his high block after the match, instead bemoaning the lack of aggression and, most importantly, intensity from his team. Much as Spurs coach Jose Mourinho last week against Everton for their “lazy pressing”, Hasenhüttl probably had every right to do the same here. Southampton looked lethargic and lacked their trademark tenacity throughout the team.

“We definitely played very naïve after going [behind] and after that it was humiliation.”

After all, since the Austrian’s arrival nearly two years ago, the team’s style has been characterised by an exceptional work rate and a form of organised chaos in their relentless pressing all over the pitch. A large part of Saints’ game is built around forcing the opposition to turnover the ball in dangerous areas and – more significantly – preventing them from having the time on the ball to pick out killer, long-range passes.

For a team to play like this and engage their opposition high up the pitch, a relatively high line is essential. The former Leipzig coach’s team perfected their off the ball work during Project Restart and only lost one game in nine, but have started this season looking off the pace.

With the 3-1 win against Watford in June arguably demonstrating the best of the team’s pressing, they forced the Hornets’ backline into seven losses of possession and played with – you guessed it – a high line. Against Tottenham, they only managed two. Southampton didn’t make sweeping tactical changes. They just didn’t do the fundamentals correctly.

The absence of this pressing against Tottenham was evidenced by the ease with which players were allowed to pick their passes in their own half, with Giovani Lo Celso and Davinson Sánchez given enough time to write a symphony as they fired passes into Kane in the build-up to three of the goals. This sluggish pressure was compounded by repeated defensive errors and a blindingly obvious lack of leadership.

While it might be a reach to suggest a 5-2 defeat was unjust, the manager also took aim at his forwards and their wasteful finishing. “In the first half we should normally be two [or] three goals up in the first half,” he noted.

Fans of almost every team in the country believe their players are guilty of wasting chances. Southampton supporters are no exception. But in reality, last season, Danny Ings was surgically clinical and grabbed 22 goals in the league, when xG suggested he was expected to have scored 15. Southampton often thrive on those low-percentage chances that come from running the hard yards.

So Hasenhüttl shouldn’t be looking for a total reset when on Saturday. Personnel is a wider issue and the individual errors from the likes of Jack Stephens and persist. With the manager hopeful of new additions in what’s left of the window, perhaps their threadbare squad can see some new arrivals challenging for starting places. The newly-signed Mohammed Salisu will be when he returns to fitness next month.

But most of the side’s problems lie in their diminished intensity and pressing since the start of this season, following a remarkably short summer break. Whilst calling these early weeks of a strange Premier League a ‘pre-season’ sounds a convenient excuse for a manager that’s lost his opening two fixtures, you feel there’s more to come from Saints.

Liverpool’s ‘perplexing footballer’ who could be next Ings or Joelinton

Sky Sports made changes we didn’t know we needed…