The three space travelers of the Soyuz MS-17 mission are making their final preparations ahead… The post Soyuz MS-17 prepares for ultrafast, 3 hour journey to ISS appeared first on NASASpaceFlight.com. 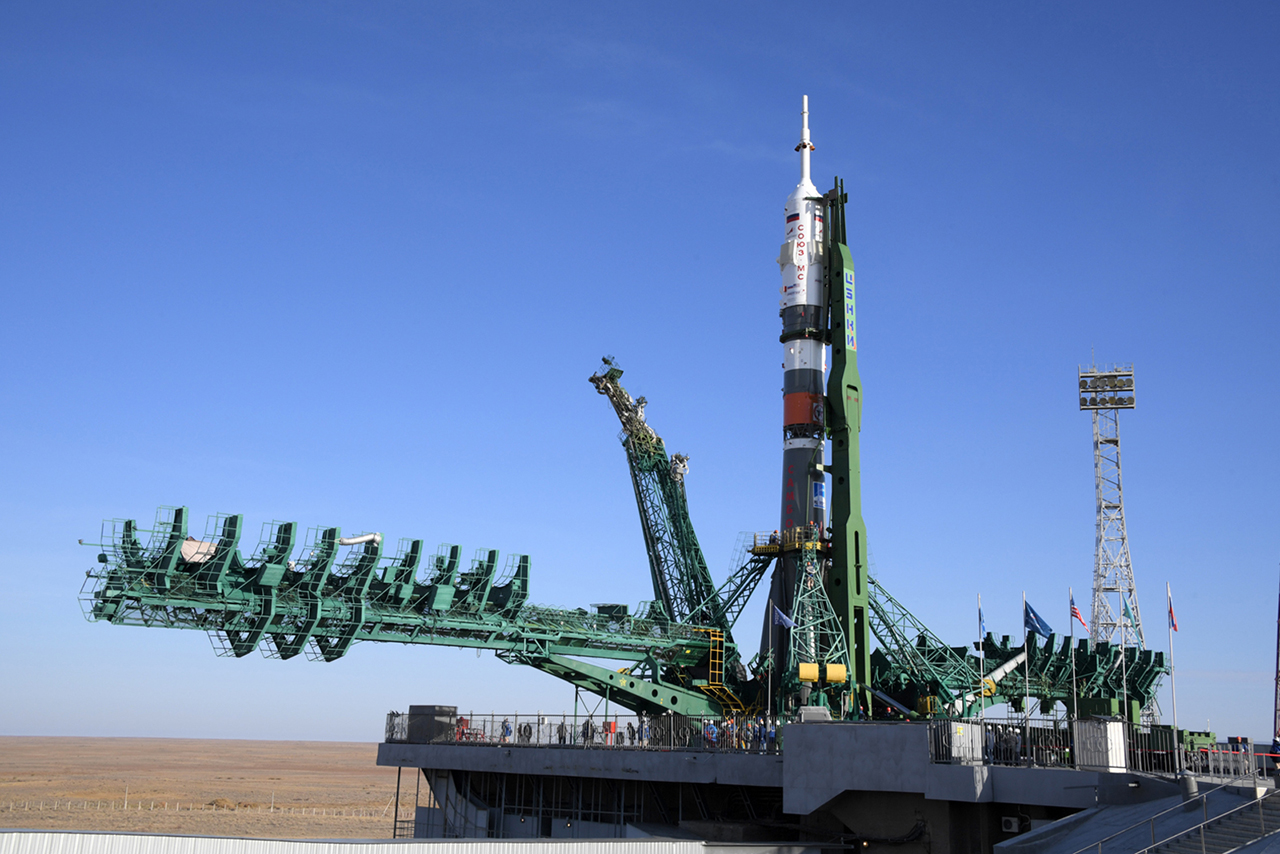 The three space travelers of the Soyuz MS-17 mission are making their final preparations ahead of a six-month stay aboard the International Space Station.

The flight is scheduled to lift off on a Soyuz 2.1a booster from the Baikonur Cosmodrome, Site No. 31/6, in Kazakhstan at 05:45:04 UTC on 14 October (01:45:04 EDT), lofting its international crew to space for a very fast, two orbit, three hour rendezvous with Station.

The launch will mark a milestone for a crewed Soyuz spacecraft, being the first to use a new “ultrafast” rendezvous scheme with the ISS. Assuming a nominal launch into the correct orbit, Soyuz MS-17 will be able to catch up with the orbiting laboratory in only two orbits (three hours), halving the time it takes for crew to get to the Station.

This method takes over from the previous one that saw Soyuz spacecraft spend four orbits in free-flight to catch up with the ISS in approximately six hours. That method, which was first used with crew on Soyuz TMA-08M in March 2013, took over from an even older method, where the Soyuz would complete 34 orbits before arriving at the ISS, leaving the crew inside the small spacecraft for over two days.

Although the flight will mark the first crewed mission to use the ultrafast method, it has been tested before using un-crewed Progress resupply spacecraft. Multiple Progress have successfully utilized the two-orbit, three hour rendezvous profile, starting with Progress MS-09 in July 2018. 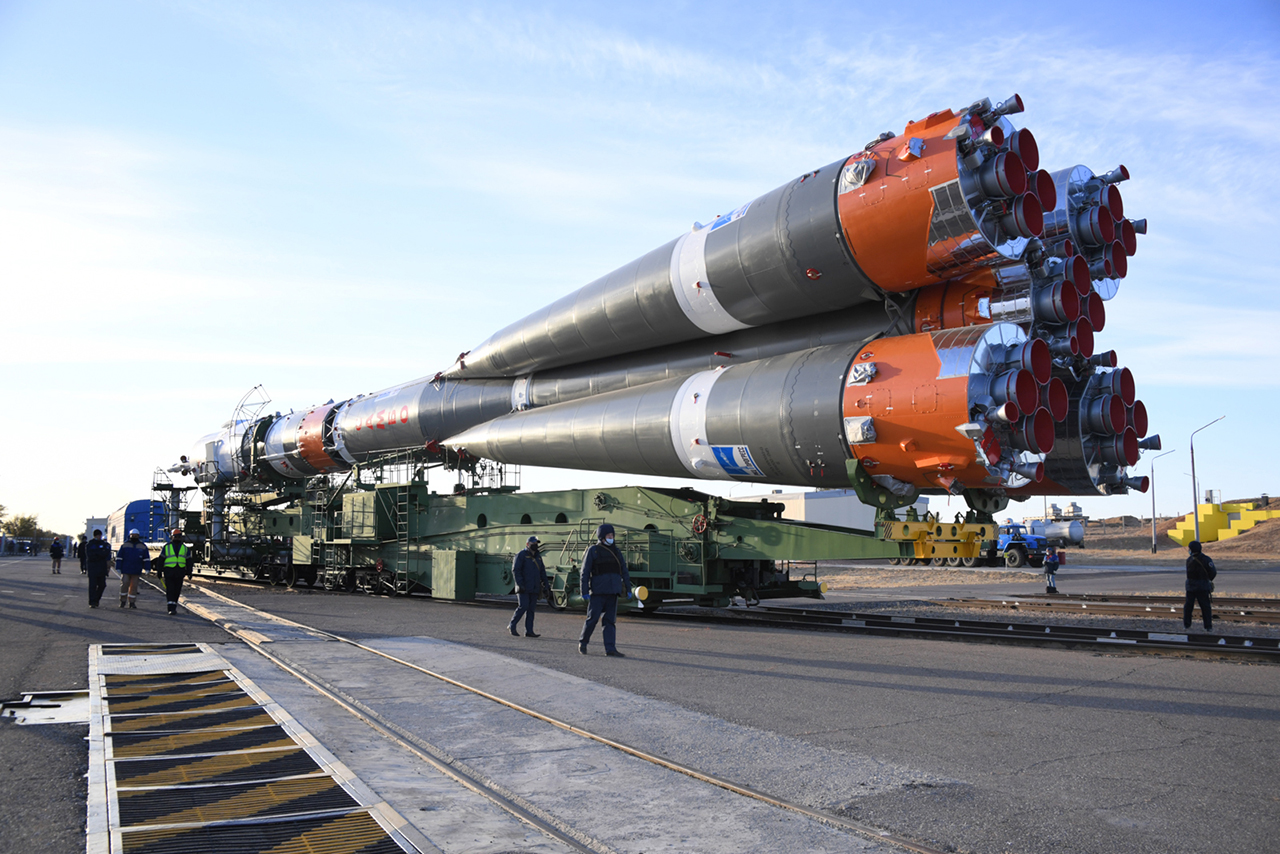 Unfortunately, something as simple as a slightly off-nominal orbital insertion or missed correction burn could dash the astronaut’s hopes of a quick arrival at the Station they will call home for six months.

In March 2014, Soyuz TMA-12M launched with the intention of bringing its three crew members to the ISS using the then-new six-hour rendezvous method. However, an issue with the Soyuz’s attitude control system caused the spacecraft to miss its third scheduled course correction burn, necessitating a reversion to the two-day rendezvous plan.

The need to have Soyuz crews arrive at the Station so quickly has to do with the extremely cramped, close-quarters nature of the vehicle. For the crew inside, it is a far better psychological and physical benefit to reach the Station as quickly as possible.  However, it is perfectly safe for crews to be in Soyuz for a two day trip to the Station should that be needed.

Conversely, the U.S. Commercial Crew vehicles, Dragon and Starliner, while theoretically capable of reaching the Station that quickly, do not have that same requirement as they are far roomier for their four passengers given they are not solely ISS rotation vehicles but available for solo missions to Earth orbit as well.

Therefore, the U.S. vehicles target/will target a more leisurely one-day rendezvous flight profile with the Station — as was seen on SpaceX’s Demo-1 and Demo-2 missions and is the plan for Crew-1 in November and Starliner’s Orbital Flight Test 2 mission in 2021.

Soyuz MS-17 will be commanded by Sergey Ryzhikov, a veteran Roscosmos cosmonaut who has racked up 173 days in space over the course of one long-duration flight to the ISS. 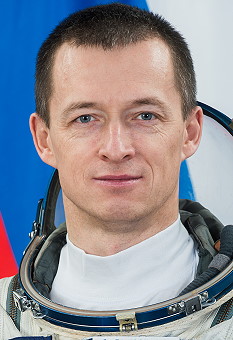 Sergey Ryzhikov prior to his first flight into space. (Credit: NASA)

Ryzhikov was born on 19 August 1974, in Bugulma, a town now known as the Republic of Tatarstan — a federal subject of the Russian Federation.

He comes from a military background, having been a fighter pilot in the Russian Air Force, where he spent over 700 hours flying in high performance fighter jets.

Selected by the Cosmonaut Corps in October 2006, he officially completed training in 2009, following which he earned the title of “Test Cosmonaut”.

He made his first flight into space on 19 October 2016 aboard Soyuz MS-02. Ryzhikov served as the Commander of the Soyuz spacecraft and was joined by Russian cosmonaut Andrei Borisenko and NASA astronaut Shane Kimbrough. He spent 173 days in space as a Flight Engineer on Expeditions 49 and 50 before returning to Earth in April 2017.

Ryzhikov was assigned as backup Commander for Soyuz MS-17 in November 2019, although crew changes in February 2020 resulted in him being bumped to the prime crew.

He will serve as Flight Engineer on ISS Expedition 63 and take over command of the Station for Expedition 64 following the departure of Soyuz MS-16, currently scheduled for 21 October.

His backup is Russian cosmonaut Oleg Novitsky, a veteran of two previous long-duration stays on the ISS.

Sergey Kud-Sverchkov is the only rookie cosmonaut launching aboard MS-17; he will serve as Flight Engineer 1 on the Soyuz spacecraft. 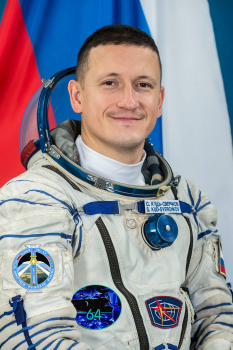 He was born on 23 August 1983 in Baikonur, Kazakh Soviet Socialist Republic (now The Republic of Kazakhstan), making him rather unique among the many space travelers who have left Earth from the vast Kazakh Steppe as he was born in the same city from which he’ll now launch into space.

After graduating Moscow State Technical University with a degree specializing in rocket engines in 2006, he went on to work at RSC Energia, the Russian corporation that builds the Soyuz spacecraft and rockets. He would work at Energia as an engineer until April 2010, when he was selected to train as a cosmonaut.

His training was completed in July 2012 and he qualified as a “test cosmonaut” the following month. He was part of the Roscosmos specialization and improvement group for the ISS program until November 2019 when he was assigned as part of the backup crew of Soyuz MS-17 alongside Ryzhikov.

Like with Ryzhikov, crew changes earlier in 2020 resulted in him being bumped to the prime crew in February.

He will serve as Flight Engineer on both Expeditions 63 and 64. His backup is Russian cosmonaut Pytor Dubrov, who has also yet to make his first flight into space.

The final member of the crew is Flight Engineer 2, Dr. Kathleen “Kate” Rubins of NASA, who has spent 115 days in space over the course of one long-duration flight to the ISS. 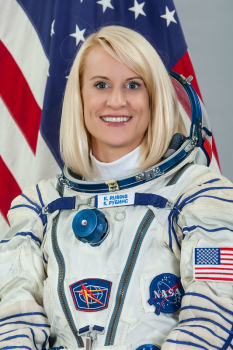 Born in Farmington, Connecticut on 14 October 1978, Dr. Rubins will launch into space on her 42nd birthday — assuming no launch delays.

Rubins received a Bachelor of Science in Molecular Biology from the University of California in 1999 and went on to earn a doctorate (PhD) in Cancer Biology from Stanford University in 2005.

She worked at the Salk Institute for Biological Studies in San Diego, where she conducted research into HIV-1. Alongside the US Army Medical Research Institute of Infections Diseases and the Centers for Diseases Control and Prevention, she was part of a team that developed the first model of the smallpox infection. She then led a team of scientists studying viral diseases at the Whitehead Institute for Biomedical Research in Massachusetts.

Dr. Rubins was selected by NASA in 2009, becoming part of the agency’s 20th Astronaut Group, also known as “The Chumps”. She completed her training in November 2011, officially becoming available for future flight assignments.

Her first flight was as a Flight Engineer aboard ISS Expeditions 48/49. She launched aboard Soyuz MS-01, the first flight of the newly upgraded Soyuz MS spacecraft, on 7 July 2016 alongside Russian cosmonaut Anatoli Ivanishin and Japanese astronaut Takuya Onishi.  Upon launch, she became the 60th woman to fly in space.

She returned to Earth alongside Ivanishin and Onishi on 30 October 2016.  Her reassignment to a second flight came unusually quickly for a NASA astronaut of the current Space Station-only era at just under three years after her return from her first flight. She will be the first member of her astronaut group to fly in space twice.

The launch will mark the second crewed flight of the Soyuz 2.1a booster, which officially took over from the veteran Soyuz-FG with the launch of Soyuz MS-16 in April 2020.

Due to the COVID-19 pandemic which has been sweeping the planet since November 2019, extra precautions were needed as the crew prepared for their journey to the Station. Similar precautions were used prior to the launch of Soyuz MS-16 and SpaceX’s historic Demo-2 mission, both of which left the planet amid the pandemic. 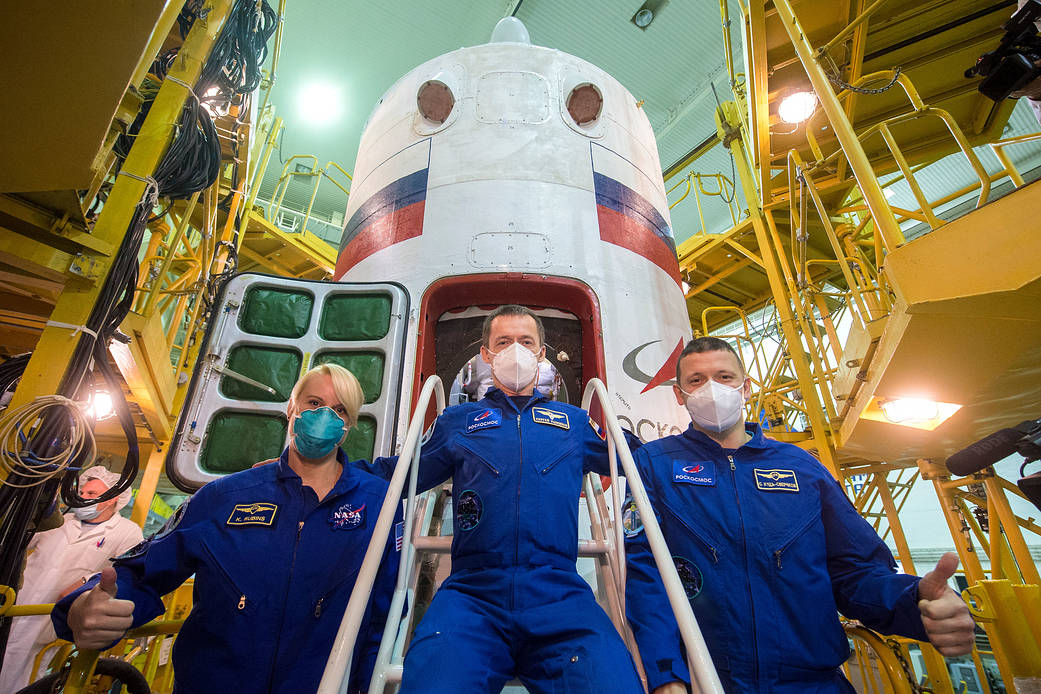 Roscosmos decided to train a two member reserve crew (in addition to each crew members back-up) to add extra precaution and insure launch occurs on time even if any member of the prime or backup crew falls sick. Russian cosmonauts Anton Shkaplerov and Andrei Babkin took the positions of Reserve Commander and Flight Engineer 1 respectively, while NASA opted not to assign a reserve to Rubins and Vande Hei.

The launch will place Soyuz MS-17 into its initial orbit, where the craft will separate, deploy its solar arrays and communication antennas, and immediately send its position and velocity data back to Mission Control, Moscow, to verify a good orbit insertion and ability to perform the ultrafast rendezvous.

Assuming a nominal orbit insertion, the crew will arrive at the ISS in approximately 3 hours and 20 minutes, where they are scheduled to dock to the Rassvet docking port, joining Expedition 63 crew members Chris Cassidy, Anatoli Ivanishin, and Ivan Vagner, who have occupied the station since April this year and are scheduled to depart later this month.

As members of Expedition 64, they are scheduled to be joined by SpaceX Crew-1, the first operational crew rotation flight of SpaceX’s Crew Dragon and NASA’s Commercial Crew Program. The flight will ferry NASA astronauts Michael Hopkins, Victor Glover, and Shannon Walker as well as Japanese astronaut Soichi Noguchi to the ISS for a six month stay.

Crew-1 was originally scheduled to join Expedition 64 at the end of October; however, an issue with a SpaceX Falcon 9 rocket’s gas generators during a September non-NASA launch has caused a delay to no earlier than “early- to mid-November”. 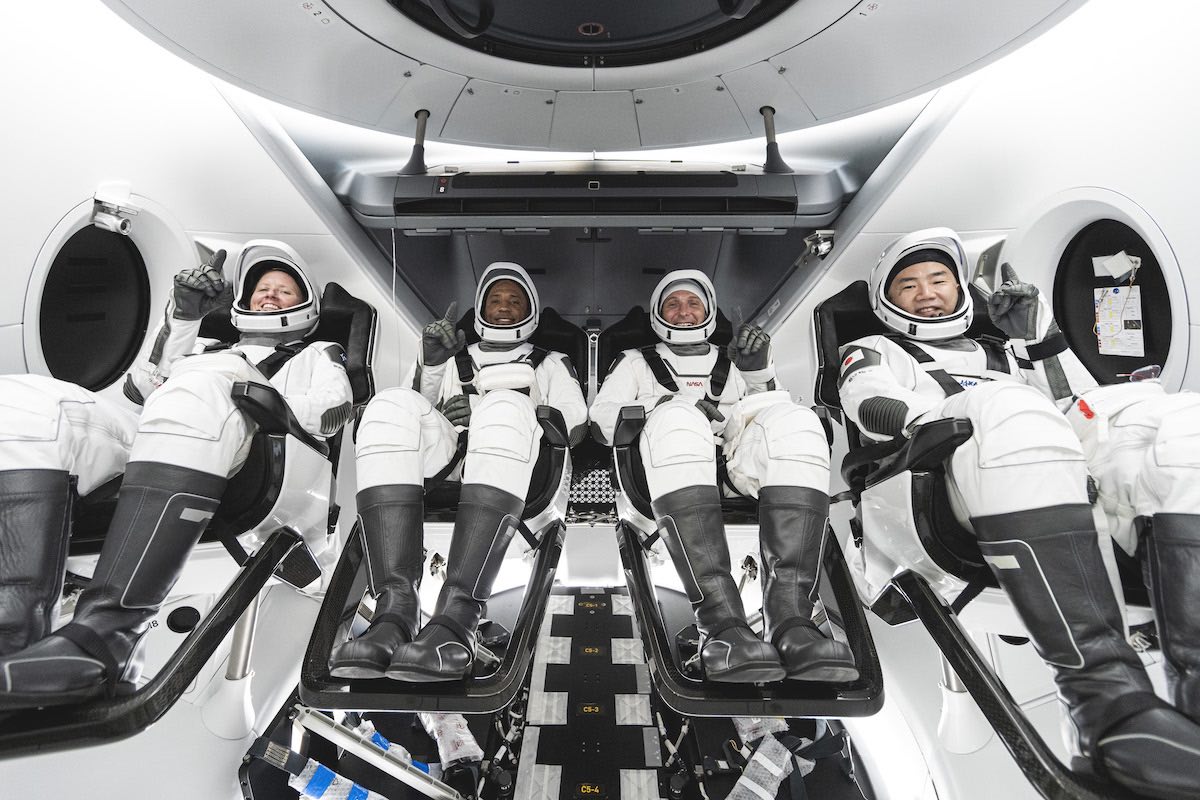 During the course of Expedition 64, Ryzhikov and Kud-Sverchkov are scheduled to perform two spacewalks, the first to carry out routine maintenance on the Russian segment and a second to prepare the Pirs docking compartment for separation, as the module is scheduled to vacate the Station in early 2021 to make way for the arrival of the long-delayed Nauka laboratory module.

Soyuz MS-17 and its three crew members are scheduled to leave the ISS in April 2021 ahead of a return to the Kazakh Steppe, with a total planned flight time of 177 days.