SpaceX Starship: The Continued Evolution of the Big Falcon Rocket

Since 2012, SpaceX has been working on a reusable rocket family, now called Starship, that… The post SpaceX Starship: The Continued Evolution of the Big Falcon Rocket appeared first on NASASpaceFlight.com. 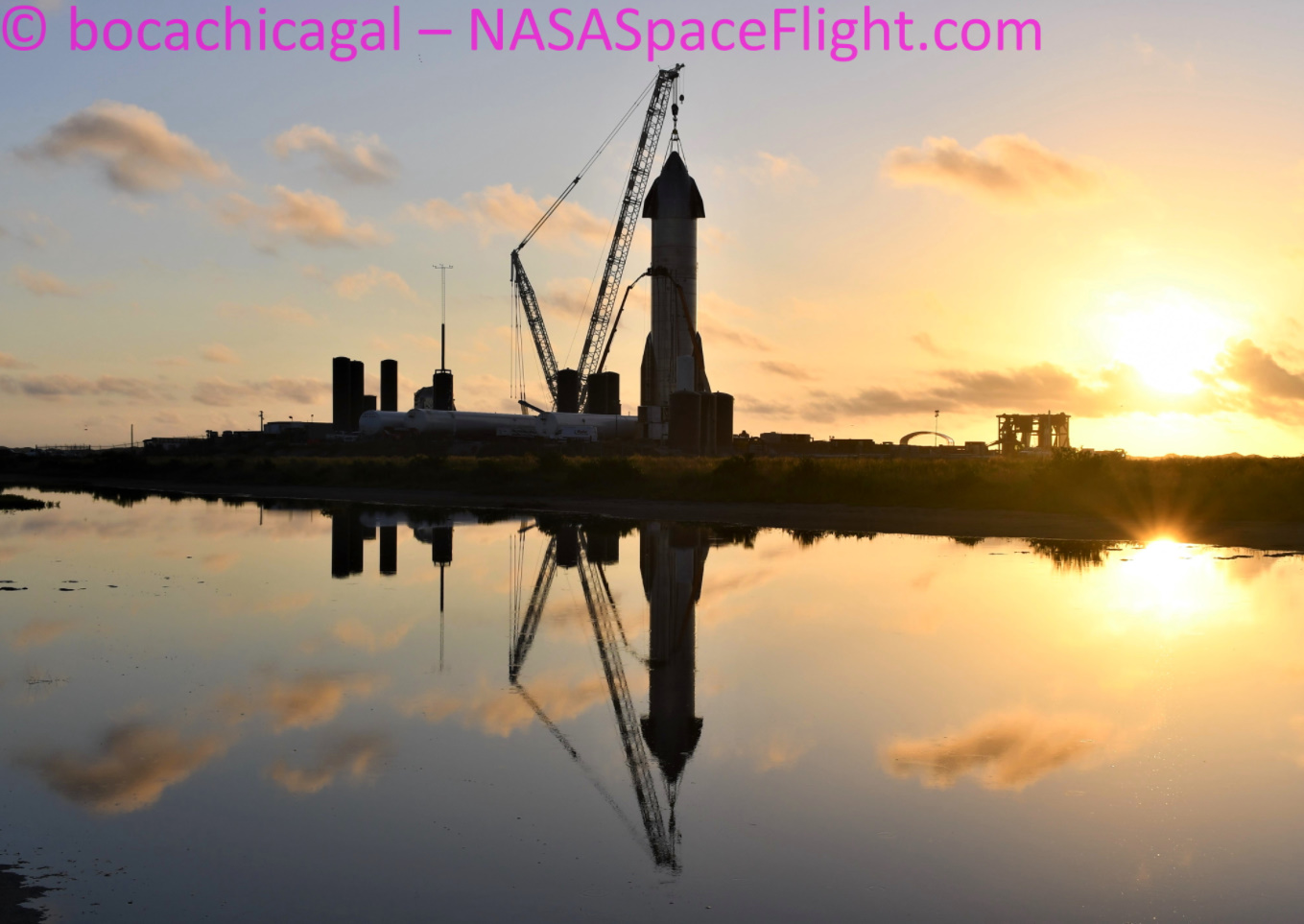 Since 2012, SpaceX has been working on a reusable rocket family, now called Starship, that will eventually replace its workhorse Falcon 9 family.  Its design has evolved into a rocket possibly unprecedented in its ambition, being even larger than the venerable Saturn V rocket, but with far more uses.  At launch, it will be the world’s largest launch vehicle and mass 5000 tonnes, more than eight times the world’s largest passenger jet, the Airbus A380.

Pushing it off the pad will be 28 Raptor engines producing more thrust than an astounding 50 A380s (75,315 kN/16,931,500 lbf).  The Starship upper stage alone will mass 11/12th of a Falcon Heavy, and its reusable cargo variant’s 150 tonne payload would take five reusable Falcon Heavy launches to equal.  Its cargo bay is large enough to swallow a passenger locomotive or a tunnel boring machine.

A passenger variant of Starship will hold at least 100 passengers in a 1000 cubic meter pressurized cabin, an amount 9% greater than the International Space Station.  This variant could potentially enable hypersonic point-to-point travel from any two points on Earth in 60 minutes or less.

A tanker variant would be required for missions beyond low Earth orbit (LEO), enabling the retrieval and repair of satellites, missions around and to the Moon, Mars and beyond.  With the potential to slash the cost of missions to a fraction of their current levels, Starship’s debut may herald a new era in spaceflight.

Thanks to NASASpaceflight.com’s (NSF) behind the scenes reporting, SpaceX’s method of building it out in the open and Elon Musk regularly tweeting new details, we have been able to trace its progress through 12 known versions.

In 2006, while attempting to launch its 28 tonne Falcon 1 rocket, four year old SpaceX was given seed money by NASA to build a much larger ten-engined rocket – nine engines on the first stage and one on the second stage – called the Falcon 9, canceling plans for the smaller Falcon 5 rocket.

Before the decision was made to go ahead with the Falcon 9 though, Musk made plans to eventually build something called the BFR, or “Big Falcon Rocket,” which at that time was planned to have the biggest engine in history according to Musk biographer Ashlee Vance.  It’s worth remembering that at the time SpaceX’s then-failing Falcon 1 rocket massed less than 1/100th the size of the Saturn V Moon rocket! 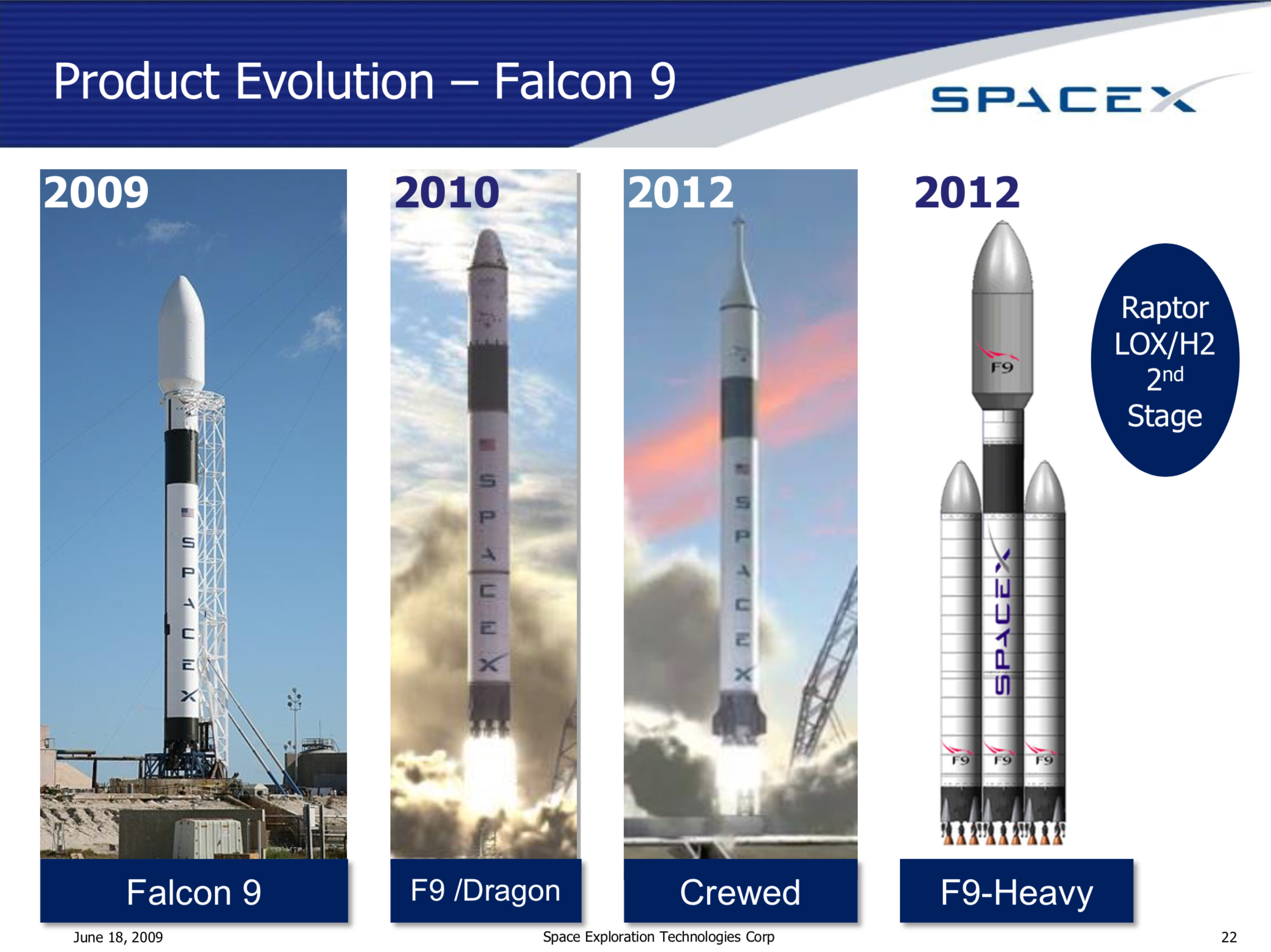 On June 18, 2009, the first public mention of the Raptor rocket engine was made by SpaceX’s Max Vozoff at the American Institute of Aeronautics and Astronautics (AIAA) Innovations in Orbit: An Exploration of Commercial Crew and Cargo Transportation event.  However, it was not connected to the BFR at this time, being envisioned as a hydrogen-oxygen upper stage engine for the Falcon 9.

Conceptual ideas for the massive Falcon X, Falcon X Heavy, and Falcon XX super heavy-lift launch vehicles were also presented at the 2010 Joint Propulsion Conference. These were to be powered by very large Merlin 2 engines producing 7,565 kN (1,700,766 lbf) of thrust, with an ISP of 285.0 seconds at sea level and 321.4 seconds in a vacuum. 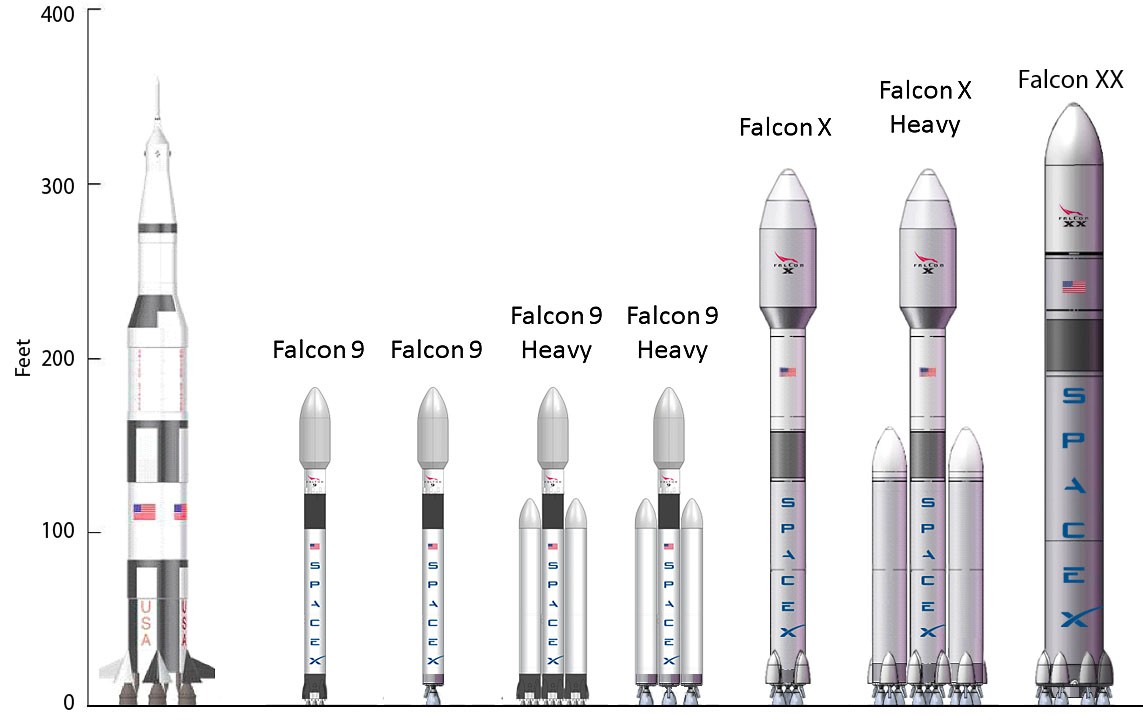 Falcon XX – as shown by SpaceX

These vehicles were to be essentially larger cousins of SpaceX’s Merlin 1 engine that powered the Falcon 9, which were kerosene/liquid oxygen burners that used the simple gas generator cycle. Shortly after the presentation, Musk disavowed that the ideas shown were firm plans for future rockets. Subsequent events suggest that they were in fact precursors to Starship.

In June 2011, engineer Jeff Thornburg was placed in charge of Raptor engine development and given a small team. Its development proceeded slowly due to its low level of priority.

By October 2012, with SpaceX’s engine expertise growing and finances improving, the Raptor had transformed into an engine several times as powerful as the Merlin 1 engine. Multiple Raptor engines were to power a future rocket called the Mars Colonial Transporter capable of lifting 150-200 tonnes to LEO.

The next month, Musk announced that the Raptor was to be a methane/liquid oxygen (methalox) engine. Methalox has the advantage of being producible on Mars, easier stored and handled than hydrogen, is less prone to coking in the combustion chamber than kerosene/liquid oxygen, and when sub-cooled, has only 21% greater volume per unit of propellant mass.  The engine’s cycle was changed from a gas generator to a staged combustion cycle, which was more complicated but allowed higher efficiency and thrust.

Staged combustion cycle engines flow propellant through two or more combustion chambers, where it is combusted in stages.  This has the advantage of higher fuel efficiency (measured in specific impulse) at the cost of increased complexity.  The Raptor’s first thrust figure of at least 2,942 kN (661,400 lbf) was announced in October 2013.

In the earliest versions, the vehicle’s structure was to be made of lithium-aluminum alloy.  Aluminum alloys have the advantage of being friction-stir weldable, having uniform properties throughout, being more damage resistant than carbon fiber, and having generally good strength to weight ratios.  However, as SpaceX refined the design, its engineers would find disadvantages with scaling up the Falcon 9’s construction methods.

NSF’s early work showed that a single 9.8 meter core version of this rocket was only capable of lifting 120 tonnes, less than the 150-200 tonnes SpaceX claimed.  A triple-core version massing 5,440 tonnes and powered by 28 Raptor engines would have been capable of lifting more than 286 tonnes to LEO.  The single-core and triple cores would have been able to launch the equivalent of a fully-loaded Boeing 757-200 and McDonnell Douglas MD-11ER, respectively.

The post SpaceX Starship: The Continued Evolution of the Big Falcon Rocket appeared first on NASASpaceFlight.com.