Captain Pike dropped a bombshell that he knew about the Mirror Universe in Star Trek: Discovery and this is something his own spinoff can explain. 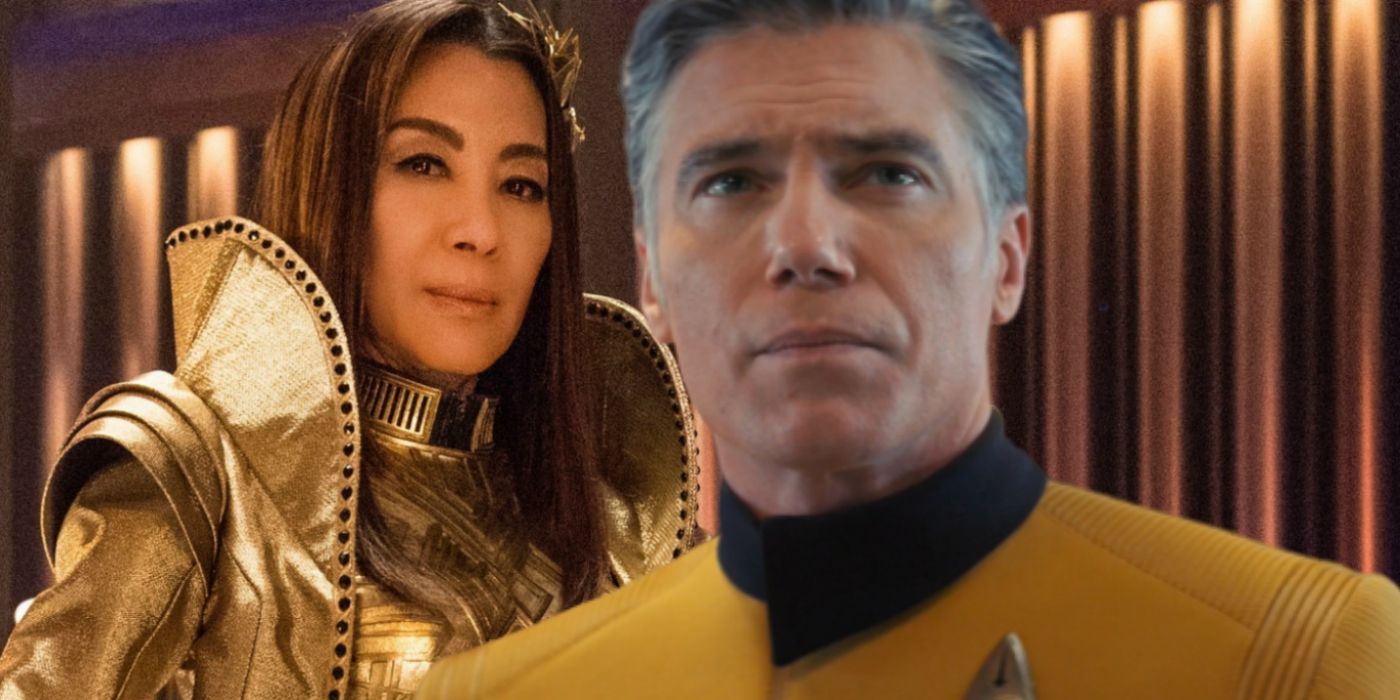 One mystery that Star Trek: Strange New Worlds can answer is exactly how Captain Christopher Pike (Anson Mount) knows about the Mirror Universe. The newest spinoff on CBS All-Access, Strange New Worlds will continue the voyages of the Starship Enterprise commanded by Captain Pike, along with his stalwart crewmates, Number One (Rebecca Romijn) and Mr. Spock (Ethan Peck). All three Starfleet heroes were reintroduced in Star Trek: Discovery season 2, but Strange New Worlds is likely to be set after the U.S.S. Discovery jumped 930 years into the future.

If it is, indeed, set after Star Trek: Discovery season 2, then Star Trek: Strange New Worlds' time frame would still be within the eight years before the Enterprise is handed over to Captain James T. Kirk (William Shatner), whom Spock (Leonard Nimoy) will join as First Officer/Science Officer. This is an ample amount of time to catalog Pike's missions, which are considered legendary within Starfleet but haven't actually been seen by Star Trek fans beyond ' first pilot, "The Cage". Meanwhile, the U.S.S. Discovery jumped to the Mirror Universe for a four-episode arc in season 1 and they brought Emperor Phillipa Georgiou (Michelle Yeoh) back with them. The doppelganger of the late Captain Phillipa Georgiou of the U.S.S. Shenzou, Emperor Georgiou was the deposed ruler of the Terran Empire but, in the Prime Universe, she became a member of Section 31 before she joined the Discovery on its one-way trip to the 32nd-century.

Related: How Star Trek: Strange New Worlds Will Differ From Discovery And Picard

However, during 's season 2 finale, "Such Sweet Sorrow", Pike dropped a bombshell on Georgiou (and Trekkers) in regards to the Mirror Universe. The Emperor decided to confess who she really was to the Captain: "I'm Terran, by the way. From your Mirror Universe." To which, Pike, who was beaming over to the Enterprise, replied with a smirk, "What Mirror Universe?" But despite his feigning ignorance, Pike was clearly not surprised by Georgiou's revelation, which amused the former Emperor. There was no time during Star Trek: Discovery season 2's action-packed conclusion for Pike to explain just how he knew about Georgiou and the alternate reality, but this is fascinating plot thread Pike's own spinoff can - and should - follow up.

Georgiou's true identity as the Terran Emperor and the existence of the Mirror Universe are closely-guarded secrets by Starfleet Command. Now, it's entirely possible that Pike's high-level security clearance as a starship captain, along with his friendships with the late Admiral Katrina Cornwell (Jayne Brook) and Captain Leland (Alan Van Sprang), the former head of Section 31, are how Pike got wind of the evil alternate universe. Hopefully, however, the answer to Pike's knowledge of the Mirror Universe isn't so banal.

It would be far better if Star Trek: Strange New Worlds revealed a heretofore unknown mission that plunged Pike into the Mirror Universe, perhaps where he met his counterpart, who was the Captain of the I.S.S. Enterprise (and who the Mirror Kirk assassinated in order to take command). This would have to be set in the years before Pike took command of the Discovery in season 2 but it would be a simple matter for Strange New Worlds to use flashbacks or any other sci-fi plot device to depict Pike encountering the Mirror Universe. This would also benefit Pike since it would make him wise to Emperor Georgiou all along without needing a top-secret intel briefing from Starfleet, which would provide a cool new context to their interactions on Star Trek: Discovery season 2.

Spock would have to be involved in any prior Enterprise mission to the Mirror Universe and this would also give an amazing new context to his behavior in the classic TOS episode, "Mirror Mirror". When Kirk switched places with his Mirror double, Spock quickly realized what had happened and he wasted no time in tossing the Mirror Kirk, Dr. Leonard McCoy (DeForrest Kelley), Scotty (James Doohan), and Uhura (Nichelle Nichols) in the Enterprise's brig. Spock later explained to Kirk that he was tipped off by the doppelgangers' aggressive and clearly evil behavior. But it would make sense if Spock, along with Pike, had actually dealt with the Mirror Universe beforehand and the Vulcan simply kept those details to himself.

Next: Strange New Worlds: Captain Pike Waited 54 Years To Get His Own Star Trek Show

‘Clarice’ TV Series is Set in 1993, After Events of ‘Silence of the Lambs’

The Masked Singer: Fox May Have Accidentally Spoiled Season 3 Winner