Star Trek: Why TNG's Enterprise Was Destroyed In Generations

The U.S.S. Enterprise-D was infamously destroyed in Star Trek Generations. Here's the reasoning behind the decision and why it's still controversial. 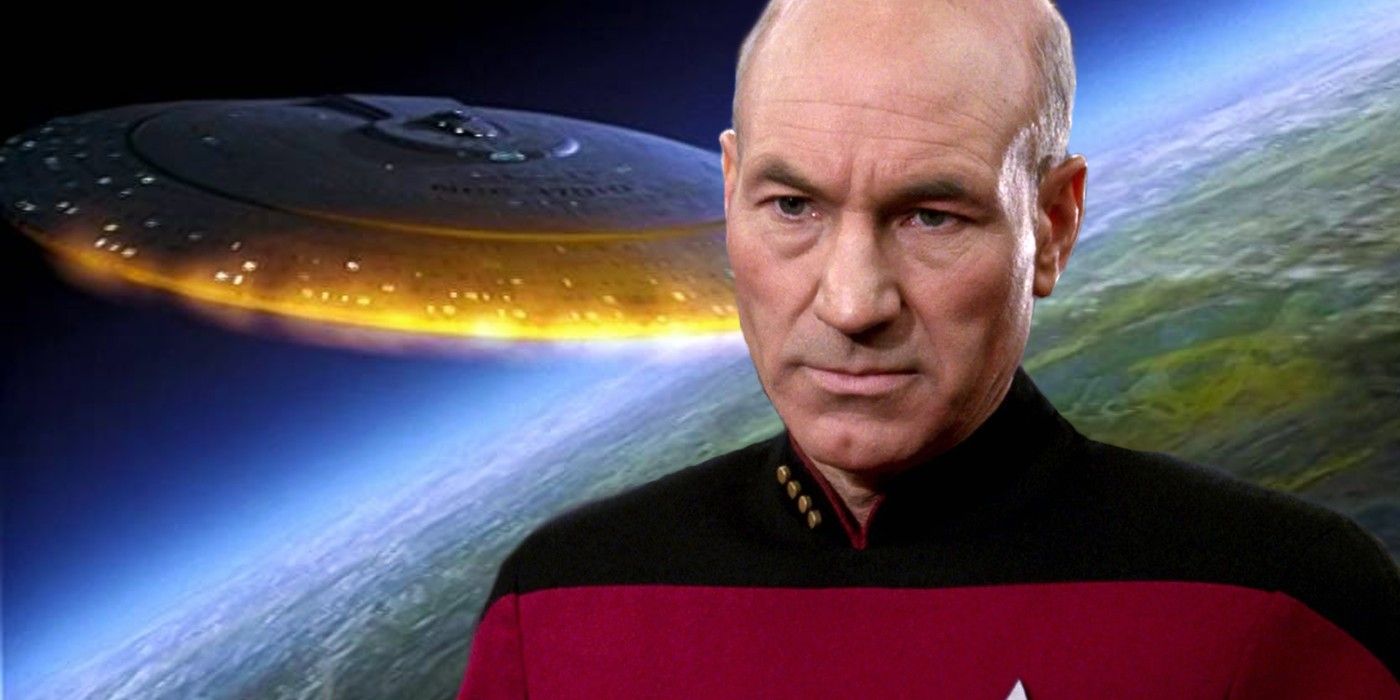 The U.S.S. Enterprise-D was famously destroyed in Star Trek Generations - and the rationale for trashing the beloved starship was simply because it was something the producers wanted to see on the big screen. As the first movie starring the cast of Star Trek: The Next Generation, the big draw for Trekkers was the historic meeting between Captain Jean-Luc Picard (Patrick Stewart) and Captain James T. Kirk (William Shatner), which ended with the death of the original captain of the Enterprise. Picard's Enterprise-D also "died" in the film, and the manner in which it was destroyed remains controversial to this day.

In TNG's era, the Galaxy-class Enterprise-D was the flagship of the United Federation of Planets and was one of the largest and most powerful vessels in Starfleet. Picard's Enterprise carried over a thousand crew and their families, it had a lounge called Ten Forward and holodecks for recreation, and wherever the mighty starship boldly went, it had enough scientific and research equipment to fulfill the ship's mission to "explore strange new worlds" and "seek out new life and new civilizations." The Enterprise-D was also enormously popular with Star Trek fans, arguably even more so than the original Enterprise commanded by Kirk. Although it only happened rarely on TNG due to budgetary concerns and story issues, the Enterprise-D could separate its saucer section from its rear stardrive section - and this was definitely a feature of the Enterprise-D Star Trek Generations' producers wanted to spotlight on the big screen thanks to the film's $35-million budget.

Related: Star Trek: Why The Original Enterprise Was Destroyed

The idea for destroying the Enterprise-D in Star Trek Generations came from artwork in the Star Trek: The Next Generation Writer's Technical Manual showing the separated saucer section making an emergency crash landing onto a planet. TNG's producers actually wanted to show this at the end of season 6, but it was prohibitively expensive on the TV show's budget. Producers Ronald D. Moore and Brannon Braga, who co-wrote Generations, pitched the idea of the saucer crash landing and destroying the Enterprise-D to executive producer Rick Berman, who gave it a green light. The TNG brain trust also agreed that it created an opportunity to introduce a new Enterprise in the next movie, which is what happened: the Sovereign-class U.S.S. Enterprise-E made its debut in Star Trek: First Contact (and it's still in service in Star Trek: Picard's era over 20 years later).

The way Star Trek Generations went about destroying the Enterprise-D, however, left a lot to be desired. While Captain Picard was on the planet Veridian III facing the villainous Dr. Tolian Soran (Malcolm McDowell), the crew led by Commander Will Riker (Jonathan Frakes) were caught with their britches down by their old enemies, the Klingon sisters Lursa (Barbara March) and B'Etor (Gwyneth Walsh). The Klingons kidnapped Commander Geordi La Forge (LeVar Burton) and altered his VISOR so they could see through his mechanical eyes. With this advantage, the Klingon siblings were able to find the code that lowered the Enterprise's shields. Once that was accomplished, their Bird-0f-Prey opened fire on the Galaxy-class starship, causing a warp core breach that necessitated separating the saucer section to save the crew. The stardrive section's explosion forced the saucer section into Veridian III's atmosphere and it crash-landed onto the planet.

Essentially, this meant that the finest crew in Starfleet was outwitted by a couple of Klingons, whose far smaller and weaker Bird-of-Prey took down the Federation flagship - an ignoble way for the Enterprise-D to meet its end. Further, Star Trek Generations actually destroyed the Enterprise-D twice; the crashed saucer was annihilated and all hands died when Dr. Soran was able to destroy Veridian's nearby star to re-enter the Nexus. Thanks to Nexus-induced time travel, Picard emerged from the Nexus with Kirk and stopped Soran. In this final scenario, the Enterprise saucer section survived the crash but Kirk died from his injuries fighting Soran. A deleted scene between Riker and Picard in the remains of the Enterprise-D's bridge said that 18 people died in the crash.

Of course, the Enterprise-D was destroyed twice before on TNG - in the episodes "Yesterday's Enterprise" and "Cause and Effect" - but those occurred in alternate timelines. The demise of the Enterprise-D in Star Trek Generations is canonical and, for many Trekkers, its movie successor the Enterprise-E never did measure up to the Galaxy-class starship from the TV series.

Next: Star Trek Theory: Kirk Is The Reason Picard Stayed As Enterprise Captain