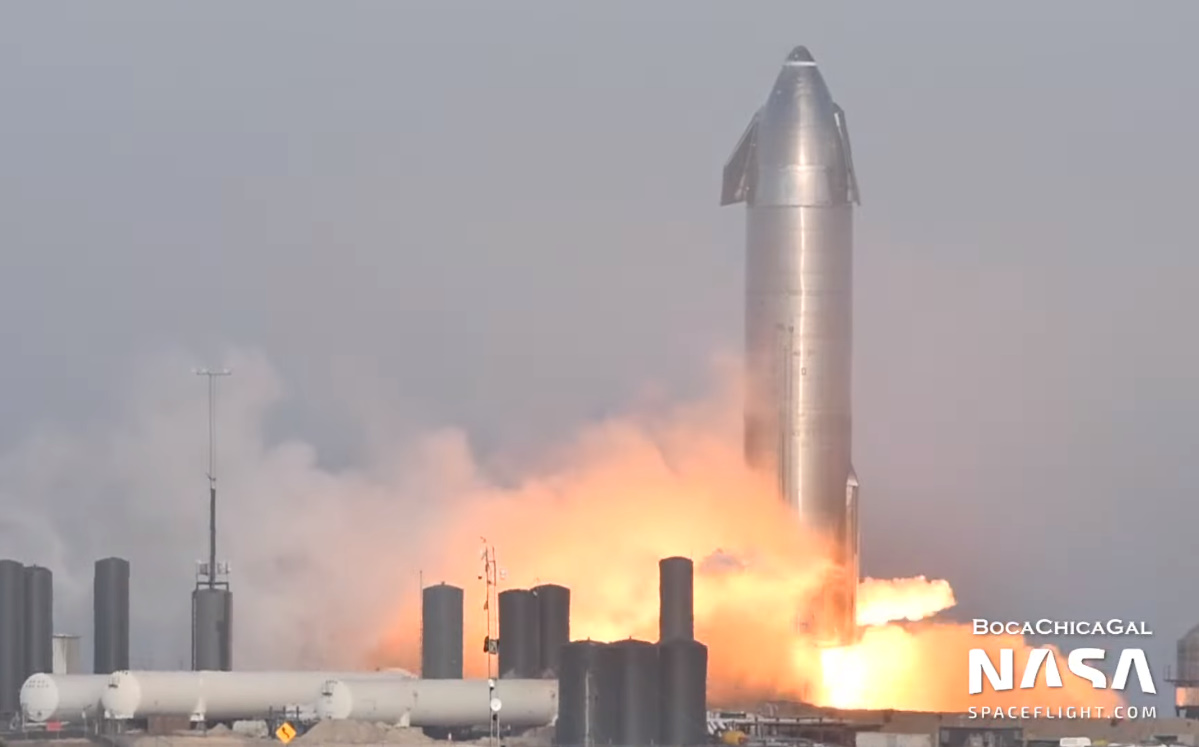 Starship SN10’s wait for launch, following weather-related delays, could soon be over following an optimistic update from Chief Designer Elon Musk. However, following SN10’s Static Fire test – which was conducted on Tuesday – a record turnaround of an engine swap was conducted, allowing for a second test on Thursday and a launch to be placed early next week.

Over at the Production Site, SN11 and SN15 are being stacked, all while the first Super Heavy (BN1) continues build-up in the High Bay.

SN10 has been sat patiently on Pad A for some time now, rolling out down Highway 4 ahead of SN9’s launch, in turn marking the first time two Starships had been out at the launch site at the same time. SN10 was pressing towards its own launch soon after SN9’s debris had been cleared from the landing pad before Texas was hit by severe weather.

Impacts past the obvious included SpaceX working alongside local officials to save Sea Turtles that were dying due to the cold weather. This included avoiding road closures required for conducting major milestones such as the Static Fire Test.

Although work never ceased at SpaceX’s Boca Chica site, the improving weather over the weekend saw an increase in activity around SN10, including testing the aft flaps – albeit deployed via the leg power of a SpaceX worker on the mount.

Interestingly, a Mary (@bocachicagal) photo of the aft flap work prompted Elon Musk to note that a launch could occur as early as this coming week.

Good chance of flying this week!

Such a flight would be subject to a successful Static Fire test – which was first attempted on Monday, with notice of such a test provided to local residents, such as Mary, on Sunday night. Monday’s attempt was scrubbed, before Tuesday’s test saw the Raptors fire up.

However, after the test, Elon noted that an engine swap would be required.

One of the engines is suspect, so we’re swapping it out

This required a second Static Fire test to be conducted ahead of setting a new launch target.

With the engine swap conducted in record time, Thursday saw SN10 fire up again – this time successfully (albeit without any official confirmation).

However, with roadblocks canceled and TFRs pointing to a launch opportunities on Monday, Tuesday, and Wednesday next week – all appears to be back on track.

Setting the launch date requires data from testing being fed into the Flight Readiness Review (FRR) – along with FAA approval – since granted, and acceptable weather conditions for launch day.

SpaceX will be hoping SN10 is third time lucky, per nailing a landing. SN8 and SN9 both achieved numerous test objectives – such as controlled ascent and a stable bellyflop return before SN8 suffered engine issues due to a loss of pressurization in the CH4 Header Tank during the landing burn and SN9 failed to ignite one engine during the flip maneuver due to an apparent ignitor issue.

While waiting for upcoming SN10 flight, here is side by side view of Mary's clip of the flight descent of SN8 and SN9 for comparison. @NASASpaceflight @BocaChicaGal @SpaceX pic.twitter.com/7w7yjhqC6Z

Should all go to plan with the latest attempt, SN10 will get to plant her landing legs into a resurfaced and expanded landing pad.

Thanks to the accuracy of the SN8 and SN9 returns, the resulting RUDs (Rapid Unscheduled Disassemblies) have caused some damage to the pad requiring repairs. Ahead of SN10, the entire pad was expanded and laid with rebar before being surfaced with fresh concrete on Sunday.

How long that concrete takes to cure was the subject of social media speculation and may ultimately be the deciding factor when SN10 launches.

Also unknown is the target altitude of this flight. It is expected to be anything between 10 kilometers and 15 kilometers.

Starship SN11 is all-but ready to make the trip to the launch site following the completion of its processing flow inside the High Bay. 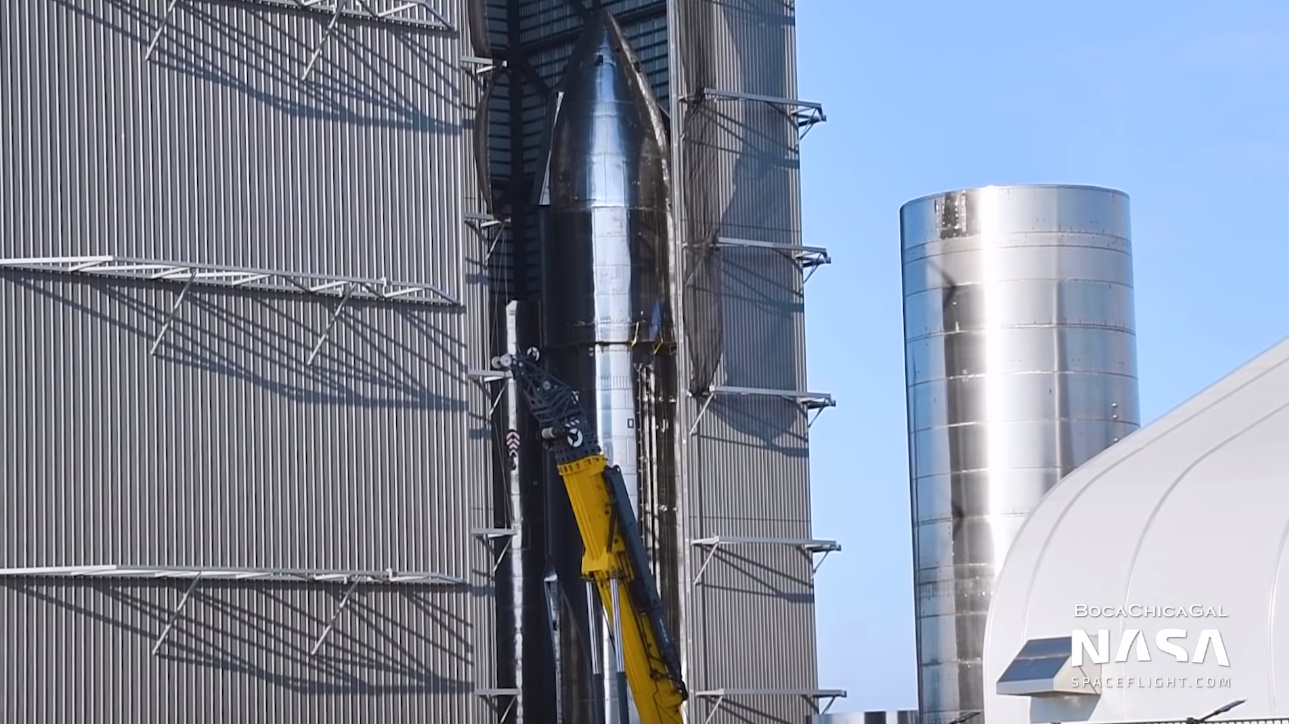 Starship SN11 in the High Bay – via Mary (@bocachicagal)

Now with a nosecone and its aero surfaces installed, the option to take the trip and host the vehicle on Pad B has not been taken at this time but will remain an option if SN10 doesn’t launch by the end of the coming week.

SN11 is a near mirror to her older sisters, albeit with an additional amount of TPS (Thermal Protection System) patches on the vehicle’s windward side.

Pending the results of SN10, this vehicle could launch relatively soon after taking the trip down Highway 4.

SN11 marks the final vehicle that will fly without the additional modifications that resulted in the scrapping of SN12, 13, and 14.

Brendan (@_brendan_lewis) latest overview of the Starships at Boca Chica

Starship SN15 will follow SN11 and will sport several improvements – some of which are unknown. What has been spotted is a new design for the Thrust Puck, while SN15 onwards will host a greater amount of TPS.

SN15’s nosecone is already being prepared, allowing for the stage to be set where this vehicle will take over the position in the High Bay once SN11 vacates it for the trip to the launch site.

SN15 will mark the next range of Starships currently in various stages of preparation at the Production Site, with parts ranging up to SN19 already spotted by Mary (@bocachicagal).

The stacking of SN16 will soon follow the same path as SN15, with the work taking place inside the Mid Bay.

This vehicle already has all its tankage sections ready for mating, with its leg skirt making an impression of a roller skater by being wheeled around with its legs deployed.

SN17 and SN18 are also building up the sections required for stacking later, while SN19’s is only a CH4 Header Tank at this stage.

However, the fact they are already working on parts for SN19 is, in its own rights, an astonishing sign of Boca Chica’s production cadence.

What is even more interesting is the evolution of what these future Starships will look like, in turn providing clues to their test regimes.

One section inside a production tent appears to be undergoing preparations to cover the entire windward side in TPS.

This unnamed section could indicate a vehicle that will be taken to an altitude that would test its heat shield under re-entry conditions. Current TPS patches are mostly being tested to see how they perform during the stresses of cryogenic propellant loading and launch and landing vibrations.

Even more impressive is the quiet build-up of the first Super Heavy vehicle, known as BN1. This vehicle could conceivably head to the launch site before the likes of SN19 take the road trip.

It is understood that BN1 would be hosted at one of the Starship launch site mounts, Pad A or Pad B, and may only be used for ground testing.

Rolling BN1 to the launch site for ground testing would allow for valuable data related to pressure and cryo-testing. It could then have Raptors installed for a Static Fire test and even a 150-meter hop, as Elon Musk originally noted.

At the time, and likely now outdated by the ever-evolving plan for Starship/Super Heavy, Elon noted a two-engine hop. BN1, however, has the capacity to host four Raptors.

BN2, meanwhile, is already showing signs it’s a step further down the line of testing, with the Forward Dome sporting an additional support ring that will provide structural reinforcement. 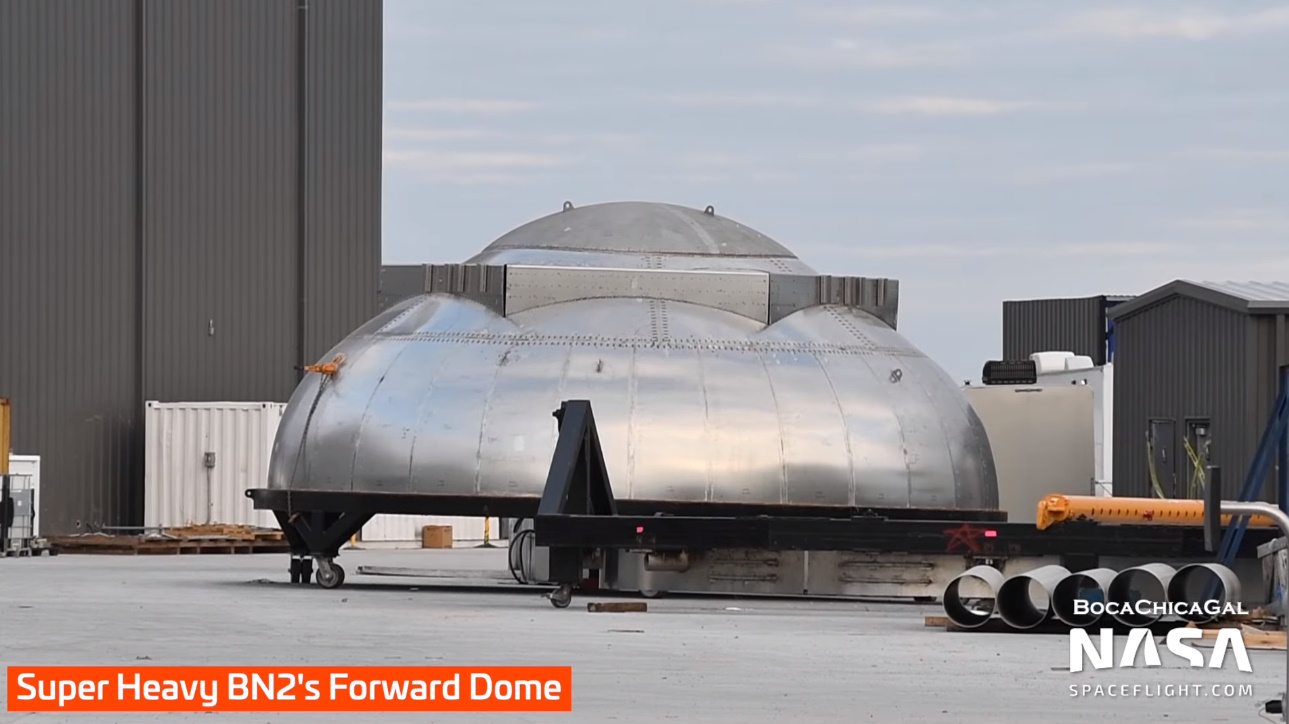 The plans for BN2’s test regime are unknown at this time. However, once additional sections have been spotted heading into the High Bay, all eyes will be on the aft end to gain an idea into how many Raptors it will host.

Super Heavy will eventually sport 28 Raptors. That full-power version of the booster, which – due to the rocket’s sheer power – will utilize one of two sea platforms, Deimos and Phobos.

The initial Super Heavy rockets, at least, will launch from the Orbital Launch Site that is continuing to be built up next to Starship’s two pads.

With the supports for the Orbital Launch site mount now complete, as it waits for the launch table to be transported from the Production Site, a huge amount of work is taking place on the Ground Support Equipment (GSE) facility.

This work includes protective bunkers for the plumbing and the groundwork for the additional commodity tanks required to quench the thirst of Super Heavy.

There was also a hint at the construction of the huge service structure that will double up as an onsite crane to mate Starships atop the booster, with contractors being hired to build a 450-foot structure at SpaceX Boca Chica.

The build-up is one of the key indicators of when Starship will make its first orbital attempt, with hopes it can take place this year.

Progress towards that major milestone will be aided by the initial test phase, with SN10 tasked with going one better than her sisters and nailing the landing at the conclusion to its test flight.

Who Was Mary W. Jackson?

The Lives, Times, and Deaths of Stars

Small garden under a geodesic dome on Mars