Starship SN10 successfully lands before RUD’ing on the pad

SpaceX’s Starship SN10 launched – and nailed the landing – Wednesday. However, likely due to… The post Starship SN10 successfully lands before RUD’ing on the pad appeared first on NASASpaceFlight.com. 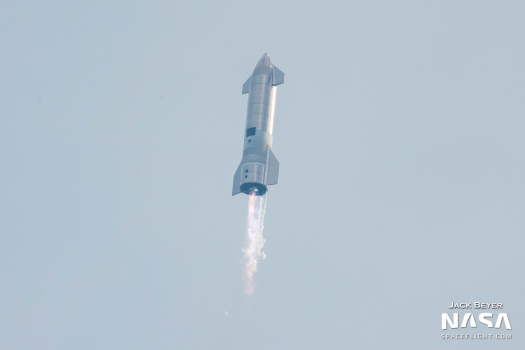 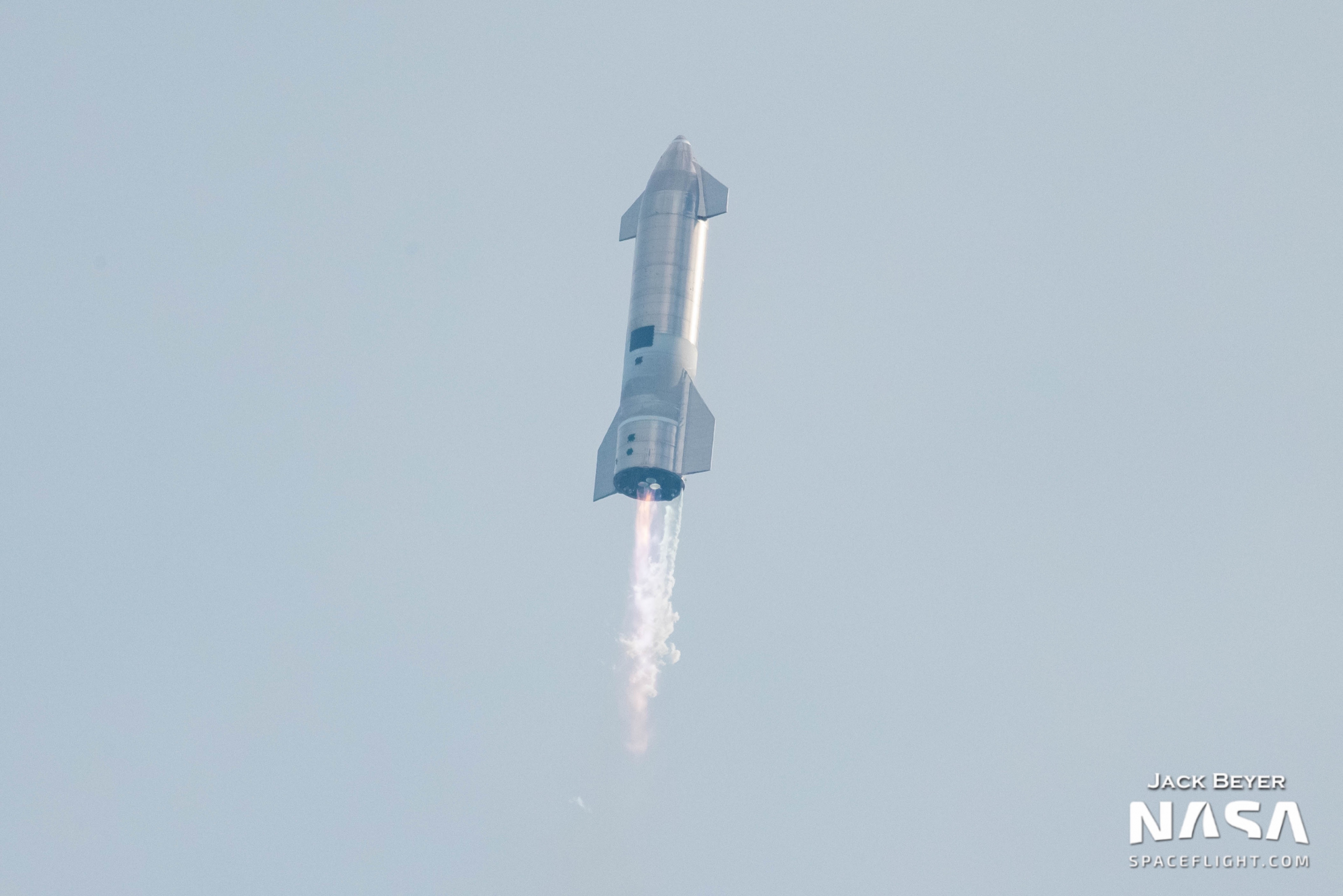 SpaceX’s Starship SN10 launched – and nailed the landing – Wednesday. However, likely due to the failure of some of the landing legs, the slightly tilted Starship caught fire on the landing pad and then blew up a few minutes later.

With this advancement in the test program, future vehicles are seeing their Raptor engines arrive, most with some comical insider joke placed on their hardware.
SN10:

Starship SN10 was the third attempt to complete the myriad of tasks involved in concluding the prototype vehicle’s initial series of high altitude test flights.

A far cry from the 150-meter hops of SN5 and SN6, observers were somewhat spoilt by the achievements of Starship SN8, which completed numerous firsts during its 12.5 km high launch. SN9 mirrored most of the tasks before suffering an engine issue during the pre-landing flip.

Those tasks will continue to be refined as SN10 rose into the South Texas skyline, initially under the power of her three Raptor engines. During ascent, one engine shut down, followed by a second, before the final remaining engine reoriented the ship for its belly-flop descent before it too shut down.

For SN8 and SN9, both vehicles showed good aerosurface controllability during the belly-flop back to the landing site. This was a major objective for Starship. This was once again the case for SN10.

However, once again, the focus was on the flip and landing burn, with SN8 completing the flip before losing CH4 (liquid methane – fuel) Header Tank pressure resulting in a “hard” landing, while SN9 lost an engine during the flip that led to a crash into the landing pad.

With helium pressurization looking good after the issue suffered by SN8’s CH4 Header Tank, mitigation of SN9’s point of failure saw all three engines lit during the flip maneuver before deselecting the engine with the least lever arm “if all three are good.”

Elon also noted how Starship would react if all three engines do relight, given “engines have a min throttle point where there is flameout risk, so landing on three engines means high thrust/weight (further away from hover point), which is also risky.”

However, this proved to be a great call, as all three did relight, before one was quickly deselected, before shutting down another engine to land on a single Raptor.

The first appeared to be nominal, prior to Elon noting that one engine was “suspect” and would require removal and replacement.

That task usually adds over a week to the timeline. However, this time engineers managed to get SN10 back into a readiness stance within two days, with Raptor SN51 being added to the vehicle.

The second time, the Static Fire test was conducted with acceptable parameters, allowing the test to move into the Flight Readiness Review (FRR) that ultimately set Monday as the NET (No Earlier Than) launch date.

However, that was soon changed to Wednesday following the evaluation of local weather conditions during the first two days of the week.

Signs the vehicle was ready for the launch included the installation of the Flight Termination System (FTS).

The first attempt at launch was scrubbed very shortly after engine ignition, before a second attempt later in the day – with more allowance on a conservative thrust limit – saw the vehicle take to the sky.

SN10 made a touchdown on a freshly expanded and resurfaced landing pad, complete with a SpaceX logo at its center.

Despite this, SpaceX Boca Chica – in typical fashion – has another vehicle ready to roll to the launch site to conduct the next test.

Starship SN11 continues to wait patiently inside the High Bay, with Super Heavy prototype booster BN1 keeping her company. SN15 continues preparations inside the Mid Bay and her nosecone is currently being assembled near the Wind Break facility.

SN11 is outfitted with a nosecone and aerosurfaces. However, it is not yet known if this vehicle has received any or all of its Raptors. SN8 rolled to the launch site without Raptors, whereas SN9 arrived with two already installed. SN10 saw her engines installed at the launch site.

What is for certain is the increasing size of the Raptor herd at Boca Chica, with new engines arriving at pace. Also notable is the turnaround of these engines from testing at McGregor, with one recent arrival showing its recent travel arrangements. 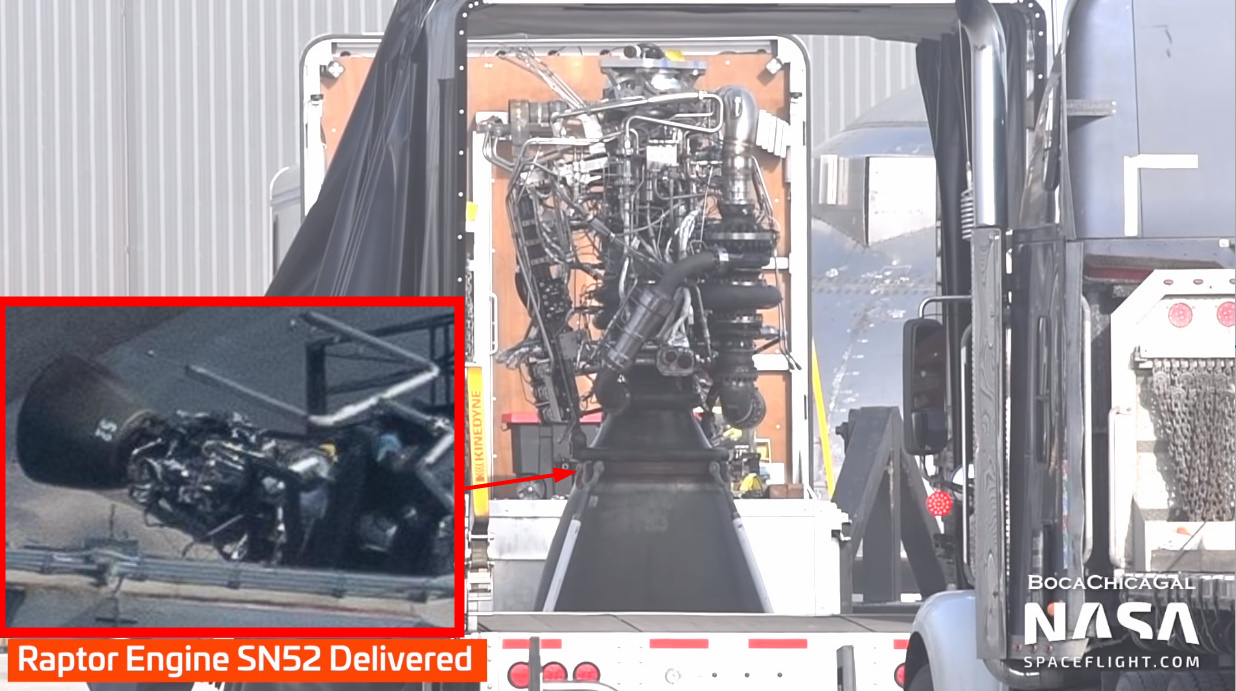 Raptor SN52 was seen in one of the bays of the horizontal test stand at McGregor just a few weeks ago. This past week it arrived on the “Raptor Van” for use on an upcoming Starship launch.

This engine was soon followed by two more deliveries – both of which sported the occasional inside joke.

Lacking an SN designation, the “Under Doge” Raptor arrived with a hat tip to Elon’s recent tweets, while SN56 was seen being loaded onto the truck for the return trip to McGregor.

Then Raptor SN47 arrived, again with a “Doge” reference, but also a message to the Starship community, with “Wen Hop” written on a box that was tapped to the powerhead. “#Wenhop” has been an often-used meme by the NSF – and then wider – community following the Starship launch schedule.

Over at the McGregor test site, the three test bays for Raptor testing have been regularly seen hosting new Raptors, a sign of the increased production rate to cater future Starships and Super Heavy boosters.

Notably, the Raptors have not been arriving in number order, which also mirrors the engines seen on the stands at McGregor.

While the future hope will be the successful landing of Starships, allowing for flight-proven engines to be refurbished for future flights, there is an obvious increase in engine stock. 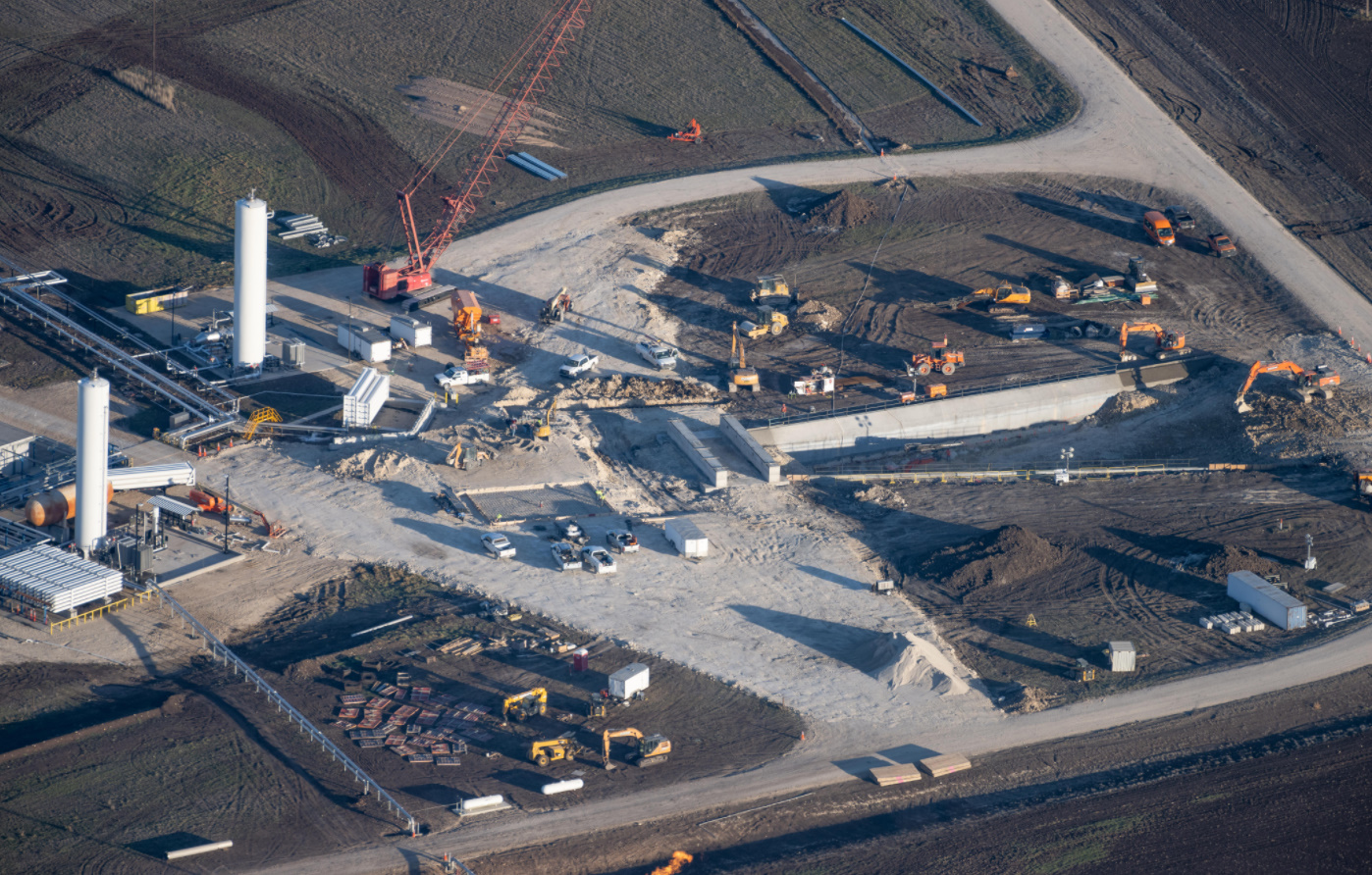 To cater for the required increase in engine cadence, a new stand – believed to be for Raptors and next to the current horizontal stand that is unutilized for testing the Starship engines – is now deep into construction.

A new trench – as seen from NSF member Gary Blair’s aircraft in the L2 McGregor section – is being built, with work taking place in rapid fashion compared to the views just a month or so ago.

Starships test cadence toward becoming an operational vehicle was again in focus, with Japanese Starship investor Yusaku Maezawa promoting his “Dear Moon” mission by asking for people to apply to fly on the mission.

Watch this video to learn more about the selection process. It also contains a special message from @elonmusk #dearMoon

That mission is cited as flying in 2023, a highly ambitious target – but also a sign of why SpaceX Boca Chica is under such an aggressive test cadence.

The post Starship SN10 successfully lands before RUD’ing on the pad appeared first on NASASpaceFlight.com.