Starship SN11 prepares for rollout as SpaceX plans for the future

Just days after SN10 completed the first – albeit hard – Starship prototype landing, SN11… The post Starship SN11 prepares for rollout as SpaceX plans for the future appeared first on NASASpaceFlight.com. 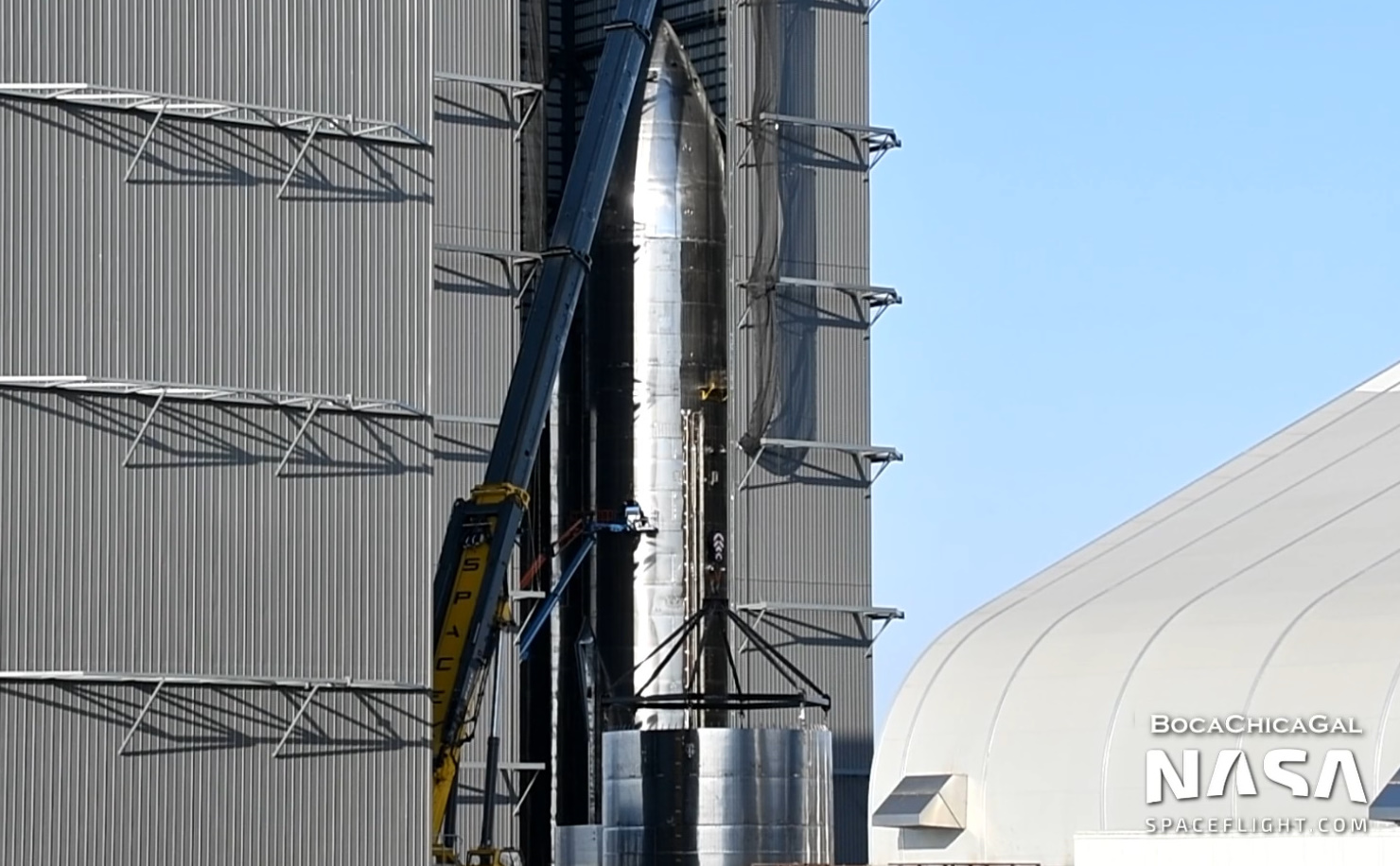 Just days after SN10 completed the first – albeit hard – Starship prototype landing, SN11 is set to rollout to the launch site for its own attempt. Incremental progress is being made with the test flights, with another tweak to the landing sequence set to be implemented, based on data gained from SN10. Meanwhile, the first Super Heavy prototype continues stacking operations while parts for up to Starship SN20 are being staged at the Production Site.

These future vehicles are set to take up residence at a launch site SpaceX plans to expand, per updated documentation.

The clean-up of SN10 remains is continuing following what was a successful test flight.

Despite the Rapid Unplanned Disassembly (RUD) that occurred minutes after landing, SN10 achieved more milestones than her SN8 and SN9 sisters – both of which crashed into the pad and exploded.

SN10 mirrored the key objectives successfully undertaken by SN8 and SN9, including ascent profile, Raptor performance, and a stable return utilizing the aero surfaces. However, SN10 went a stage further, actually touching down on the landing pad in one piece.

This was, in part, thanks to the refined relight process for the Raptors, with three engines igniting ahead of the flip maneuver. This was a refinement to mitigate the issue suffered by SN9, which called for two Raptors to relight, only for one engine to fail, resulting in the vehicle being unable to complete the flip to vertical.

With all three Raptors lighting during SN10’s flip, the maneuver was completed. However, what was assumed to be immediate deselection of the one Raptor “with the least lever arm” wasn’t realized. All three Raptors remained on during the entire flip before two Raptors shut down quickly as SN10 came in for the vertical touchdown on a single engine.

SN10 appeared to be heading for a smooth landing. However, some of her landing legs did not lock into place during their deployment – which was assumed to be why the vehicle eventually exploded by coming down hard on her aft skirt resulting in tilt on the pad.

Scenes from the crash site. Starship SN10 landed, but shortly after experienced a RUD. This is the aftermath of that rapid unscheduled disassembly. Check out the mangled Raptor Engine in the 4th pic! @NASASpaceflight pic.twitter.com/Y3noq4NhN5

It was later stated that the landing burn was at fault, with Chief Designer Elon Musk stating, “Thrust was low despite being commanded high for reasons unknown at present, hence hard touchdown. We’ve never seen this before.”

As such, had all landing legs locked into place, that would not have protected SN10 from a hard landing. “This was way past leg loads. They got squashed hard,” Elon added.

Regardless, this was still the first Starship to make it back to the pad in one piece. The challenge for SN11 will be to once again complete the milestones through to landing, with a refinement to the landing burn to mitigate against a hard touchdown.

“Next time, min(imum) two engines all the way to the ground and restart engine 3 if engine 1 or 2 have issues,” Elon pointed out.

In typical SpaceX Boca Chica fashion, that “next time” could be just a matter of a week or so away, with Starship SN11 set to roll to the launch site as early as Monday, per local road closures.

SpaceX has reduced the amount of time between rollout and launch with each Starship flow – and should SN11’s preliminary schedule hold, that pad flow record will be broken once again.

Based on a rollout on Monday – and the understanding that all three Raptors are already installed on SN11 – the vehicle could be put through proof testing a few days later, with a Static Fire test by the coming weekend.

Should all go to plan – not least with the Static Fire test where all three Raptors provide acceptable results – Starship SN11 could be in a stance to launch the following week.

This vehicle will be the last of the current version of prototypes, with the next vehicle sporting the mostly-unknown modifications that Elon Musk hinted at on social media some time ago.

Starship SN15 is currently in the Mid Bay, waiting for SN11 to depart. Once SN11 is at the pad, SN15 will be moved to the High Bay and receive its nosecone.

SN15 will include a new design for the Thrust Puck and host a greater amount of TPS (Thermal Protection System) tiles.

With the impressive production cadence in mind, SN16 and SN17 will become future stablemates inside the Mid Bay. However, parts up to SN20 – including its Leg Skirt – have already been spotted by Mary (@bocachicagal).

To aid the test flight schedule, Mary’s cameras have observed an increasing amount of Raptor deliveries.

The latest arrival was SN58, which points to an acceleration between delivery from SpaceX HQ in Hawthorne, California to SpaceX’s Test Center in McGregor, Texas, and onwards to Boca Chica for assignment onto future test vehicles.

Some of these Raptors will be assigned to Super Heavy, with continued progress on the first prototype vehicle, BN1.

BN1 is currently located inside the High Bay, behind SN11, and is now heading into the second phase of stacking operations.

With all the sections now assembled, a new heavy-duty mount was rolled to the High Bay, ready to host the second phase of stacking, ahead of integration with the already-completed tankage.

Here is the SpaceX Boca Chica launch site construction plan. Looks like there will be two orbital pads, with SpaceX eventually expanding to the south.https://t.co/keJTm7OseS pic.twitter.com/v9DY5Deg3x

The site expansion includes an extra landing pad, two Super Heavy mounts – complete with their giant launch integration towers that will also include cranes to mate Starships with the booster – along with numerous other additions.

A large amount of work has already well underway at the Orbital Launch Site, mostly relating to the Ground Support Equipment (GSE) structures and groundwork for the first integration tower. 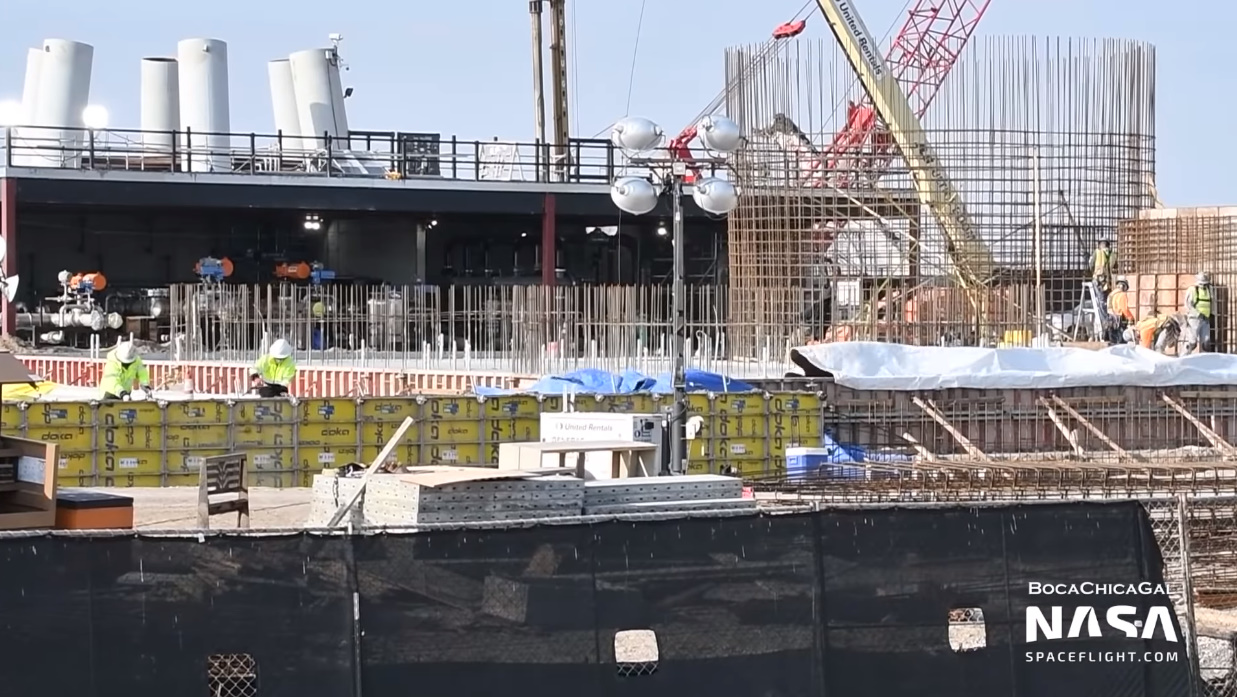 This expansion was always on the cards, based on SpaceX’s plans to increase the frequency of flights from its South Texas site.

Notably, Super Heavy’s future also includes the currently-mothballed facility at Kennedy Space Center’s 39A and via the use of two ocean platforms, Phobos and Deimos.

Progress pics of the work to Phobos, one of @SpaceX new offshore spaceports. @elonmusk pic.twitter.com/jpwMvRT4oP

As seen in updated before and after photos above, work is well underway on Phobos in Mississippi, with demolition taking place on its Bridge Deck and starboard third of forward house removed.

According to the photographer, workers are now beginning to remove equipment from the tower, and its helicopter pad – sporting the words “SpX Phobos” – has been cut in half.

The post Starship SN11 prepares for rollout as SpaceX plans for the future appeared first on NASASpaceFlight.com.

Pieces of Venus? Try looking on the moon

We Just Found Water on the Moon’s Sunlit Surface