Starship SN5 is finally set to begin Raptor engine testing this weekend after a successful… The post Starship SN5 set for a static fire followed shortly by a 150-meter hop attempt appeared first on NASASpaceFlight.com. 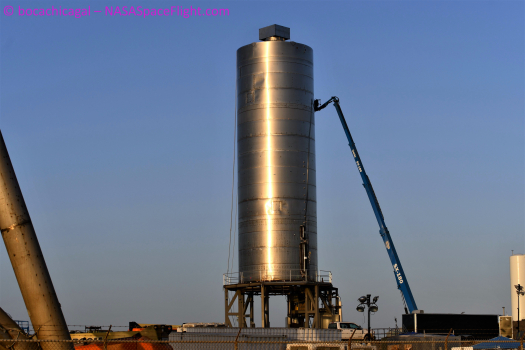 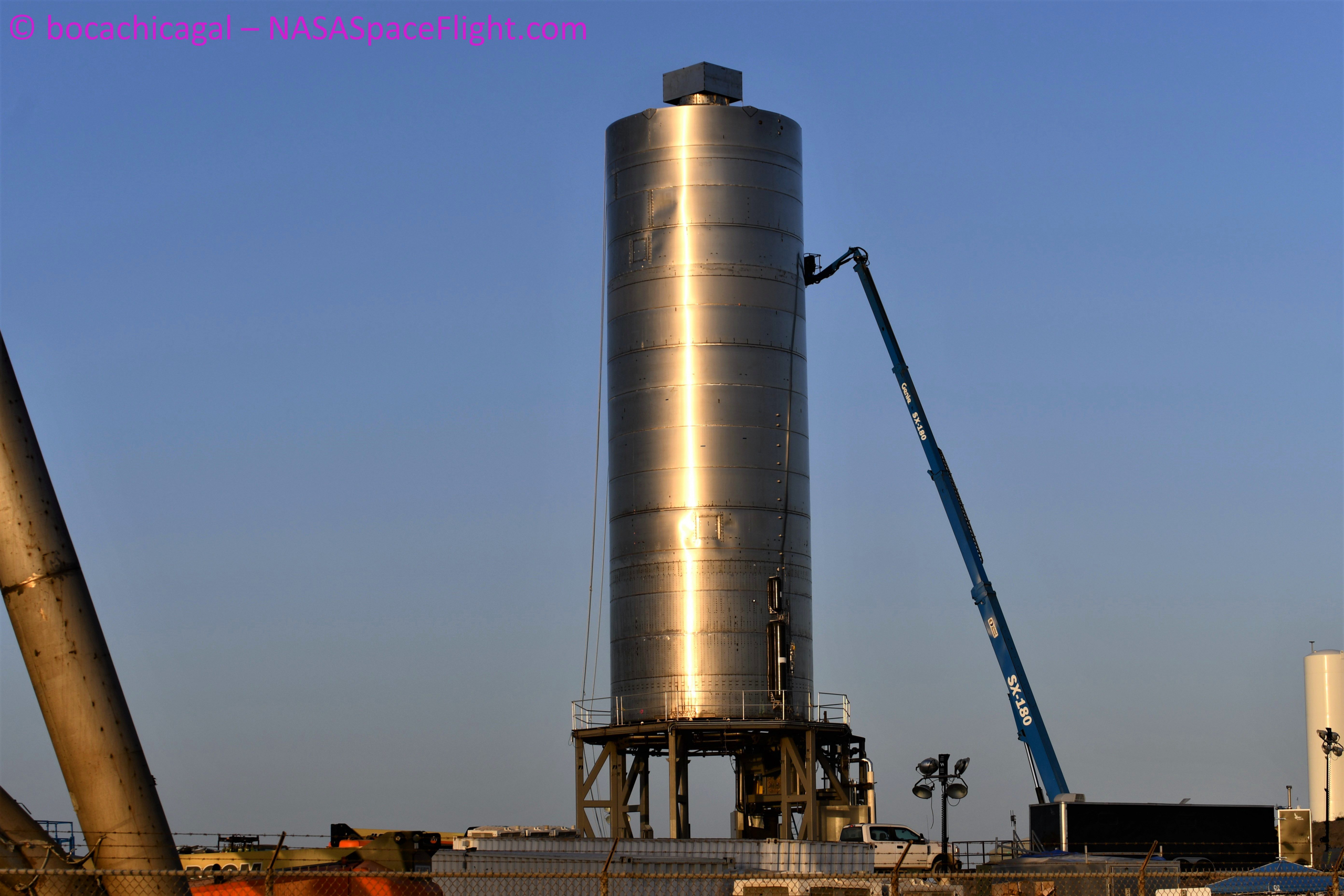 Starship SN5 is finally set to begin Raptor engine testing this weekend after a successful cryogenic proof test on July 1. If the static fire test is successful, it will clear the way for a 150-meter hop test as early as next week. The 150-meter hop will be the first test flight of a full-scale Starship tank section.

A successful cryogenic proof test on July 1 verified that Starship SN5 can withstand the forces associated with engine testing. These forces include the pressure created by the cryogenic propellants and the thrust from the Raptor engine.

Ahead of the static fire test, the hydraulic thrust simulator – used for the proof testing – was removed to make way for a Raptor engine. Raptor SN27 is the engine chosen for use on SN5.

A gap of over two weeks between the cryogenic proof test and a static fire of SN5 was longer than expected – based on how quickly SN4 moved into engine testing. Two primary factors are a result of this gap.

The first is that numerous upgrades to the ground support equipment have been made since Starship SN4 exploded at the launch pad. Thus, it has taken time to work out all of the kinks.

The second and largest reason is that unlike Starship SN4, SN5 is being prepped for a flight test right out of the gate. SpaceX does not plan to perform an extended ground test campaign with SN5 after beginning Raptor engine testing.

It is understood that one good static fire test could be enough to clear the way for a 150-meter hop test. Furthermore, only a few days may be required to prepare SN5 for the flight test following a successful static fire test. If a static fire occurs this weekend, this will put the earliest possible hop date in the first half of next week.

It should also be noted, however, that Starship testing schedules and plans are extremely fluid. Plans may change, and multiple static fires or other ground tests will be conducted before the hop.

During the upcoming static fire test, Starship SN5 will fire its single Raptor engine for a few seconds. This test will allow SpaceX to verify that the Raptor engine is properly functioning on the vehicle ahead of the flight. 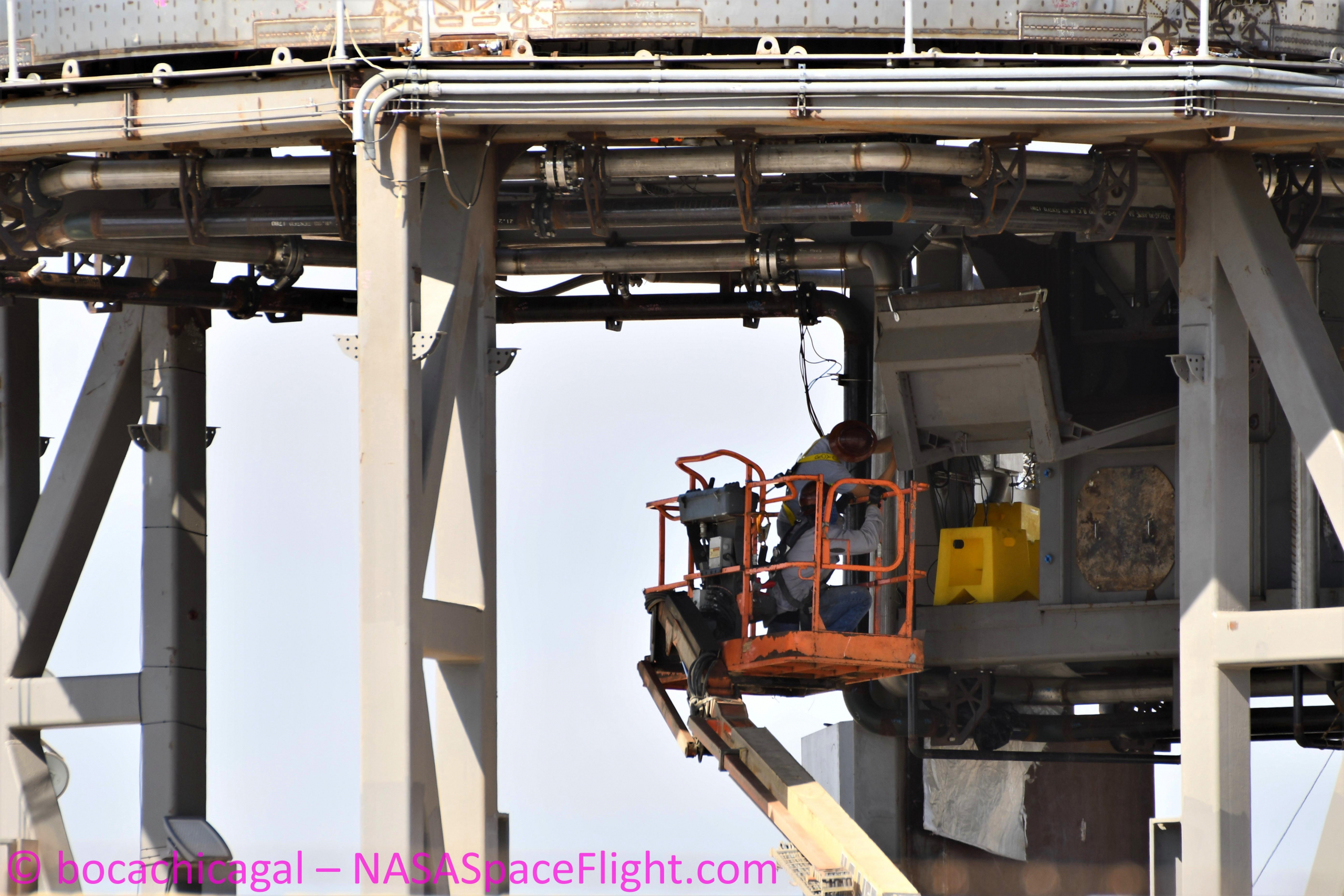 If minor issues crop up during the countdown for a static fire test, SpaceX will have the option to either abort the test and try again later or to instead settle for a spin prime or preburner test.

A spin prime test is where propellent is purged through the Raptor engine without being ignited, and a preburner test fires up the engine turbopumps without igniting the main combustion chamber.

Once a successful static fire test is conducted, SpaceX teams will take a few days to perform data review, inspections, and decide if the vehicle is “go” for a hop attempt.

The only vehicle that has previously flown from SpaceX’s Boca Chica launch facility in South Texas is Starhopper. Starhopper was a smaller prototype compared to the full-scale Starship tank section that is Starship SN5. 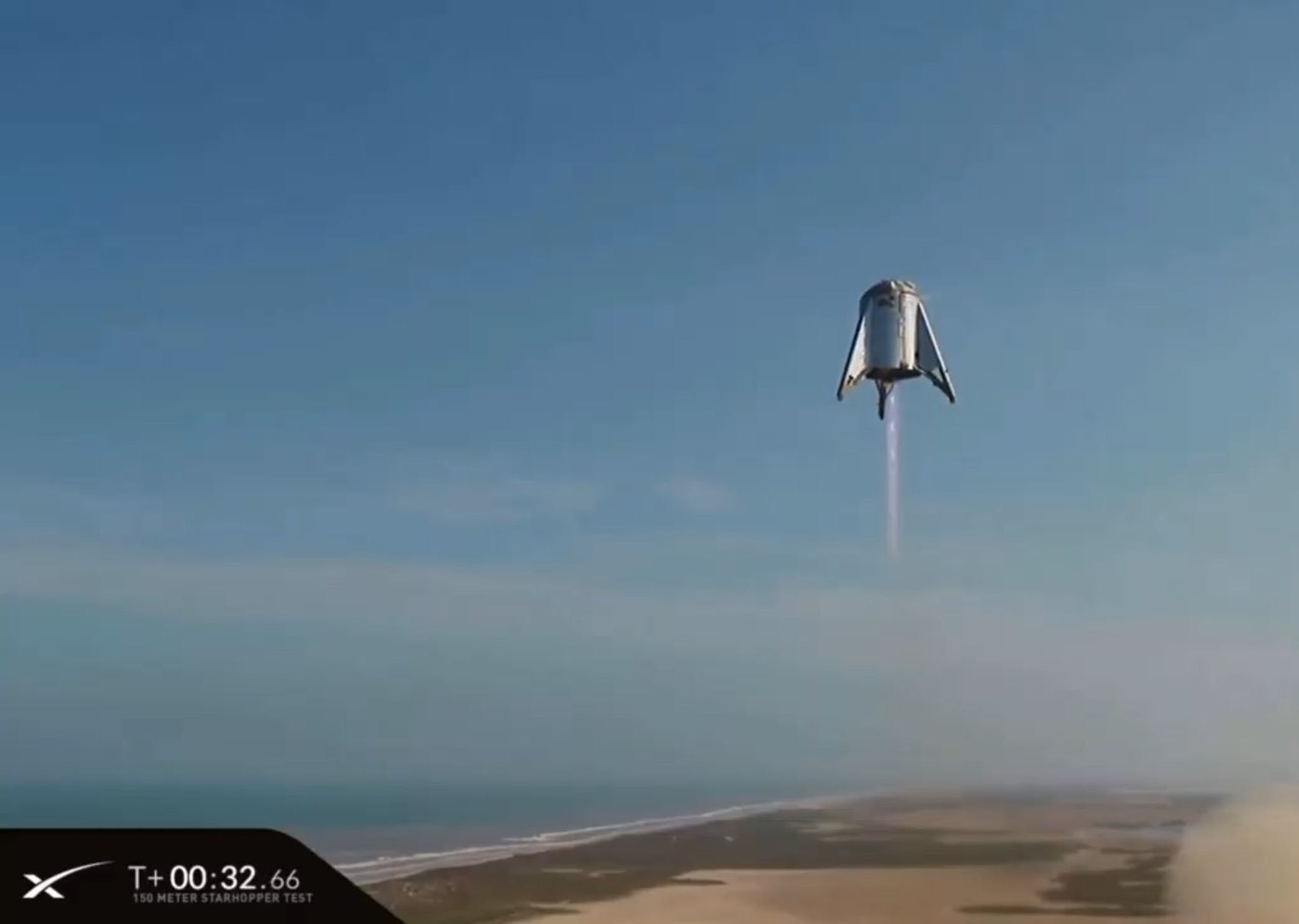 Starship SN5’s flight will be similar in profile to Starhopper’s final flight which targeted 150-meters in altitude. SN5 will also land on the same landing pad which is located adjacent to the launch pad.

However, Starship SN5 will also have to deploy landing legs. The vehicle has six landing legs located inside of its thrust section. Starhopper on the other hand had three landing legs that were permanently fixed to the exterior of the vehicle.

If the 150-meter flight of Starship SN5 is successful, SpaceX is expected to quickly move on to Starship SN8 for the next flight test – skipping the SN6 prototype.

It remains unclear if Starship SN6 would still go to the launch site for ground testing or if it would be scrapped following a successful flight of SN5.

Another uncertainty is if SpaceX would use SN6 for another attempt at the 150-meter hop test, if SN5 were to be unsuccessful in its attempt.

Whatever the case, SpaceX teams are understood to be eager to get Starship SN8 completed. The vehicle will feature major upgrades over previous Starship prototypes. SN8 will be built out of 304L stainless steel versus 301, receive a fairing, aerosurfaces, and three Raptor engines to allow for a higher altitude test flight.

Like all testing plans in Boca Chica, there is a chance that these plans for SN8 will change, but they are understood to represent the current thinking. 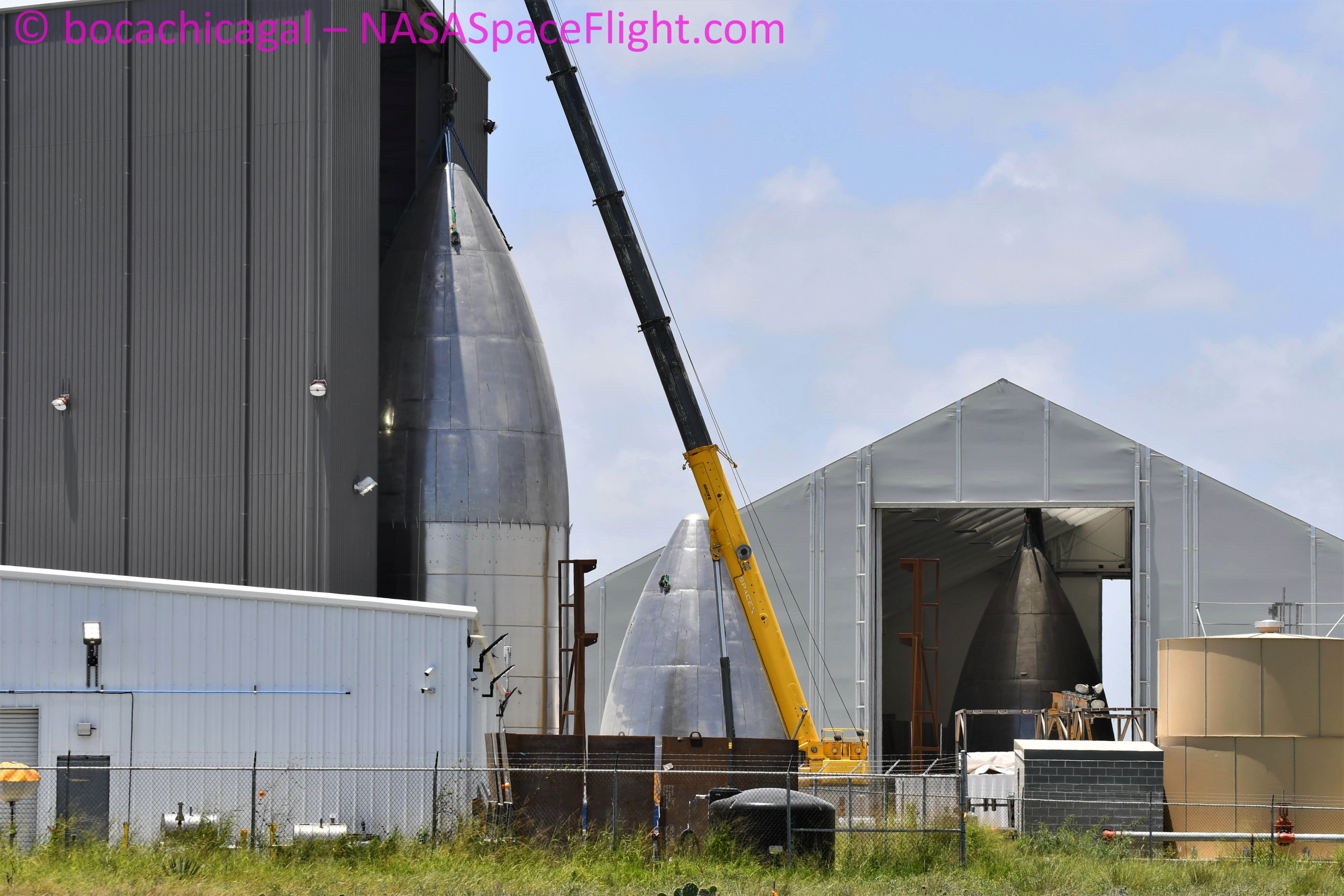 The fairing for a Starship prototype is stacked in Boca Chica, Texas. Credit: BocaChicaGal for NSF

A fairing section was stacked Tuesday at the Boca Chica production site and is potentially the fairing that will be used for SN8.

Meanwhile, SpaceX is also preparing another test tank to be proof tested to destruction. The most recent test tank, designated SN7, achieved a record pressure before it failed. SN7 was the pathfinder vehicle for the switch to 304L stainless steel.

The next test tank – designated SN7.1 – will feature further build-quality improvements, as it attempts to break the record set by SN7.

The test tanks are used to inform the design and build process for the full-scale Starship vehicles.

The post Starship SN5 set for a static fire followed shortly by a 150-meter hop attempt appeared first on NASASpaceFlight.com.

???? A New Era of Human Spaceflight

Curious about NASA’s next mission to the Red Planet – the...

OmegA Launch Tower to be demolished as KSC 39B fails to...