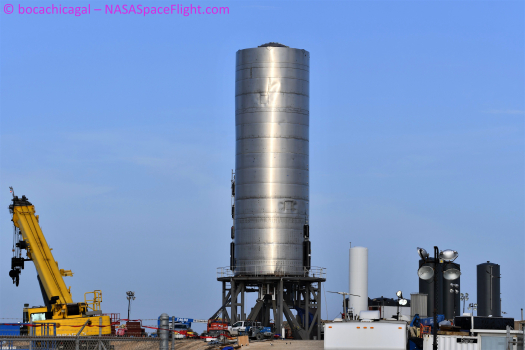 SpaceX’s Starship SN5 prototype is expected to perform a cryogenic proof test at the launch provider’s Boca Chica, Texas facility as early as Tuesday evening. The test will mark a rapid recovery for SpaceX – managing to return to testing a month after the previous vehicle exploded on the pad.

The cryogenic proof is when the vehicle’s propellant tanks are filled with liquid nitrogen and pressurized to flight pressures. Then, hydraulic pistons (otherwise known as a thrust simulator) press against the base of the vehicle to mimic the force of a Raptor engine.

The proof test will ensure that Starship SN5 is structurally sound ahead of testing with liquid oxygen and methane. Unlike oxygen and methane, nitrogen is inert and will not combust if something were to go wrong.

Tuesday’s proof test with Starship SN5 will be broadcasted live on the NASASpaceflight YouTube channel. Road closures begin at 7 pm Central time and last until 7 am Wednesday morning.

Starship SN5 follows in the heels of Starship SN4. SN4 became the first full-scale Starship prototype (excluding the fairing) to pass the cryogenic proof test. The prototypes before SN4 had failed under pressure at cryogenic temperatures. However, the success of SN4 during proof testing gives confidence that SN5 will pass without incident.

The major onus on SN5 will be to perform a flight test. To date, only SpaceX’s smaller-scale Starhopper prototype has managed a flight test from Boca Chica. All of SpaceX’s full-scale Starship prototypes have been lost before they were able to attempt a flight.

SN4 was destroyed shortly after performing a static fire test – where the vehicle ignited its Raptor engine for a few seconds while being held down to the launch stand.

Valves on the quick disconnect system failed to properly shut during the test, leaking large amounts of propellant, which eventually resulted in a powerful explosion.

In total, SN4 managed five static fire tests. The vehicle’s single Raptor engine performed well during all of them.

However, the anomaly after the fifth test prevented SN4 from being able to attempt a planned 150-meter hop test. Instead, teams quickly began repairing the launch site for Starship SN5. This process took approximately four weeks.

The relatively short recovery time was aided by the fact that a new launch stand was already under construction ahead of the SN4 anomaly. 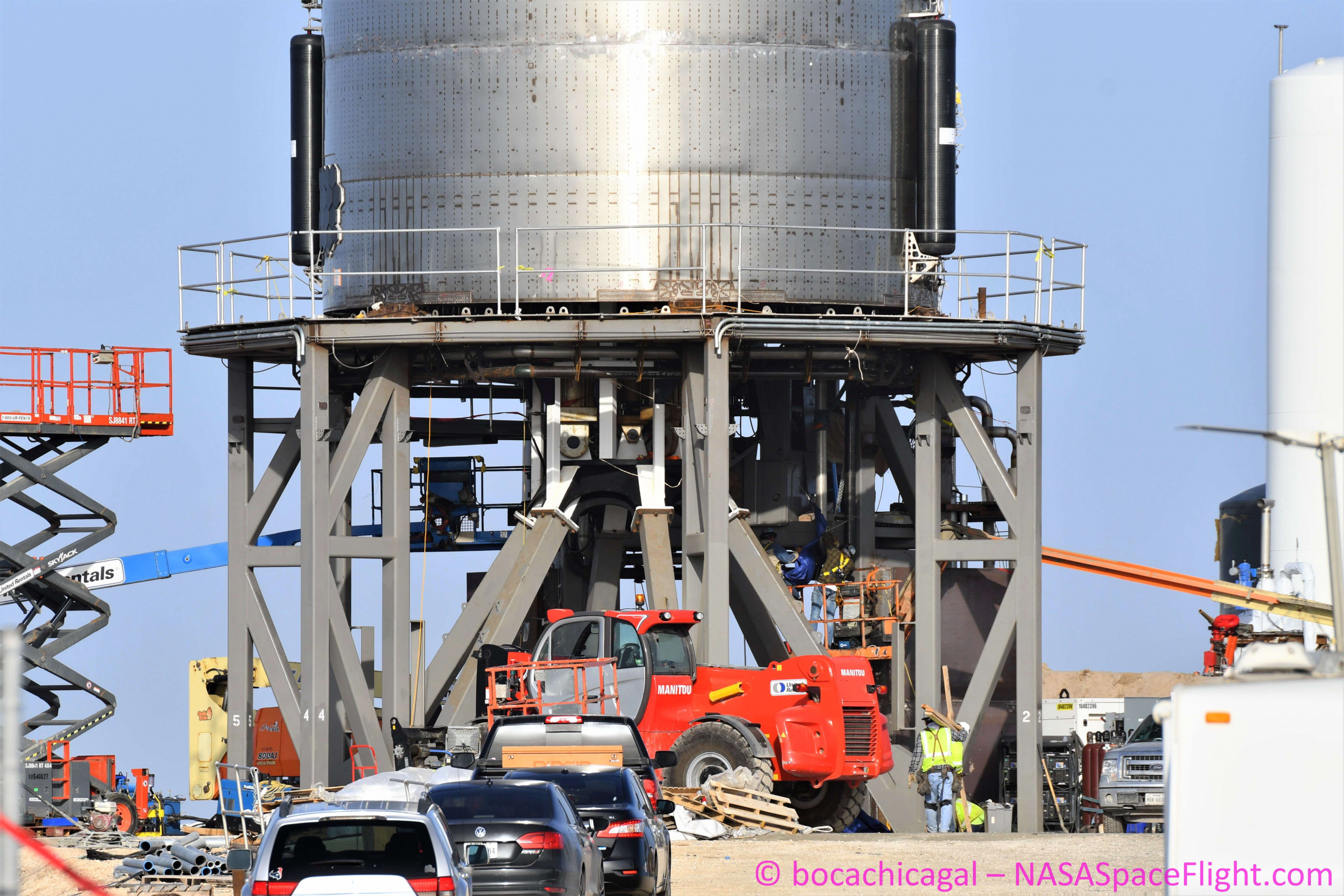 The new test stand in Boca Chica via BocaChicaGal for NSF

SN5 rolled out to the launch site on June 24 for its round of testing. After the cryogenic proof test scheduled for no earlier than June 30, the thrust simulator will be removed, and a Raptor engine will be installed. Within a few days, SpaceX teams should then be ready to move into the engine testing portion of the test campaign.

Like with previous prototypes, SpaceX will likely perform spin prime and preburner tests with the Raptor engine before attempting the first static fire of Starship SN5.

Once the vehicle is ready for engine firings, multiple static fire tests will likely be performed with SN5’s single Raptor engine. The exact number of static fires required has not been confirmed and will likely vary based on test results.

SpaceX teams will use the static fire tests to gain confidence in the vehicle ahead of deciding whether or not to proceed with a 150-meter hop test. The test will be similar to the 150-meter hop performed by Starhopper on Aug 27, 2019.

Please consider supporting me on Patreon

After Starhopper’s successful flight, SpaceX CEO Elon Musk was hoping to hop the first Starship prototype – Mk1 – to 150 meters by the fall.

While the gap in-flight testing has been far longer than expected, it is not to say that SpaceX has not been making rapid progress in Boca Chica. Over the past several months, numerous new structures have been constructed at the production site, work on the Super Heavy pad has begun, six full-scale Starship prototype tank sections have been constructed, and the build quality of the vehicles has improved immensely.

Most recently, a smaller-scale test tank – known as SN7 – performed two cryogenic proof tests to failure at the launch site. The prototype reached 7.6 bar during the first test before it sprung a small leak. SpaceX teams then repaired the leak and strengthened the welds on the vehicle before making another test to failure attempt.

SN7 is understood to have achieved a new pressure record during the second attempt, before popping as expected. However, Musk has yet to confirm the exact pressure that the vehicle achieved.

With positive results from SN7’s test campaign, it is expected that future prototype builds will also make use of 304L until SpaceX eventually transitions to its own proprietary alloy.

However, both SN5 and SN6 were constructed before SN7, and thus are still making use of the 301 stainless steel. 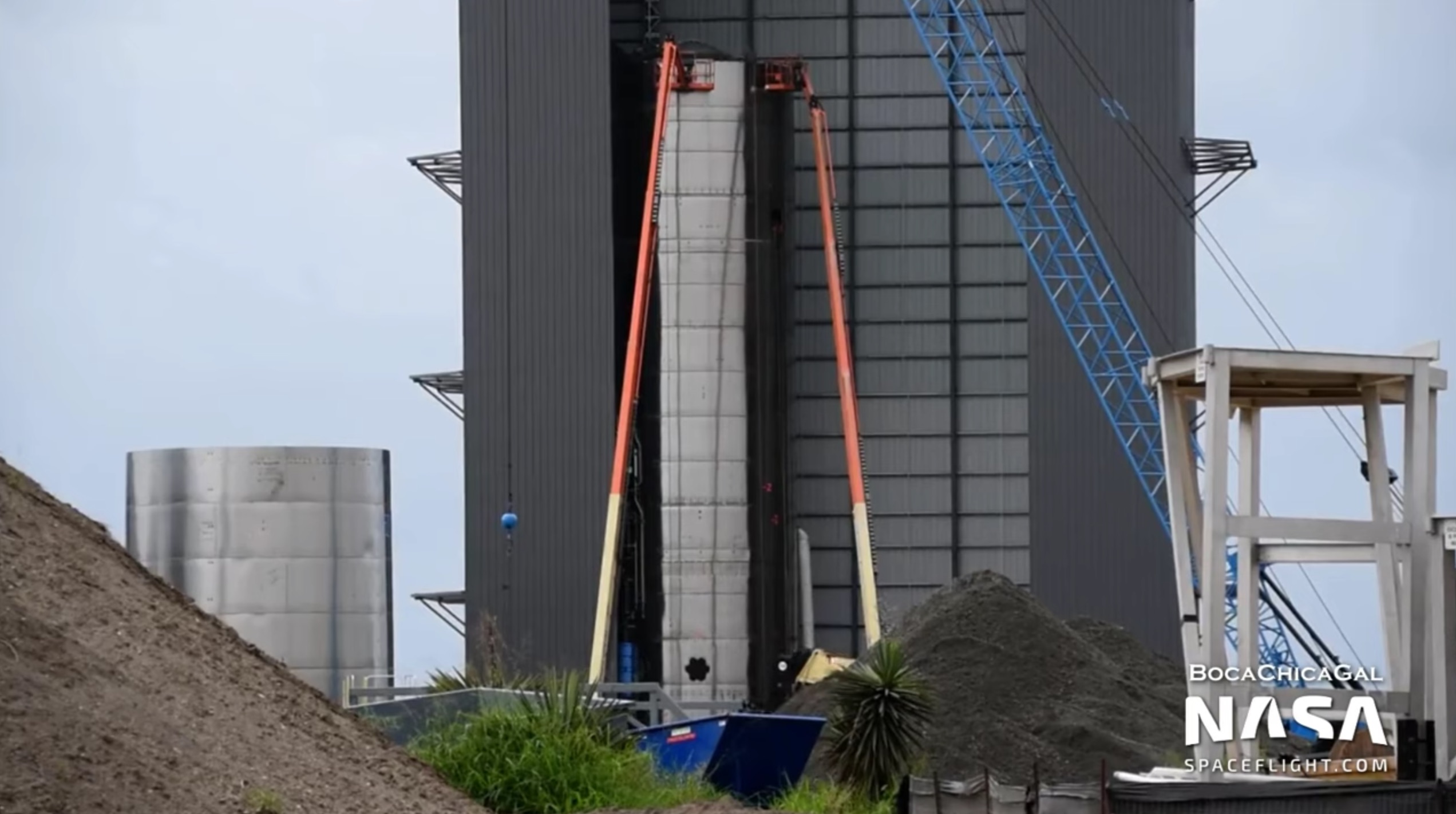 Starship SN6 in the midbay via BocaChicaGal for NSF

Starship SN6’s tank section is fully constructed in the Boca Chica midbay. That vehicle will likely head to the launch site as soon as SN5 completes testing. If all goes well with SN5, SN6 may be the first Starship prototype to receive a fairing for its test campaign.

The addition of a fairing would allow SN6 to conduct a higher altitude test flight.

Hop tests to higher and higher altitudes are expected with the upcoming prototypes, as SpaceX news to gain experience with Starship’s aero surfaces when descending through the atmosphere.