Starship SN5 is aiming to succeed where its predecessors have failed by passing all the… The post Starship SN5 survives Hanna, scrubs initial Static Fire attempts appeared first on NASASpaceFlight.com. 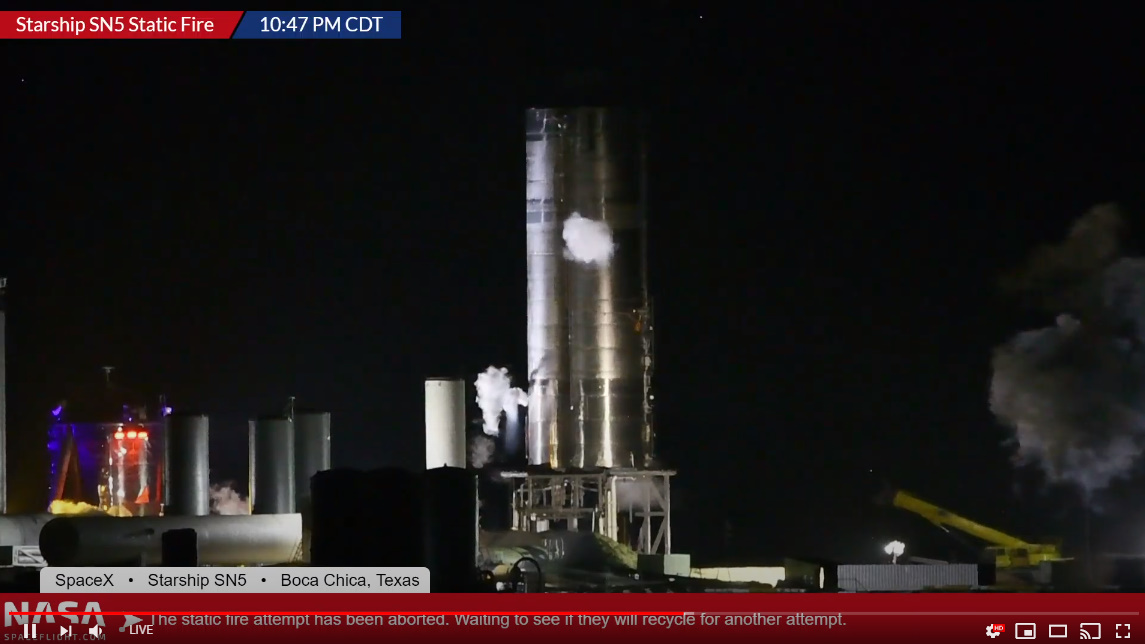 Starship SN5 is aiming to succeed where its predecessors have failed by passing all the required testing required for the 150 meter hop. While Starhopper still holds the claim for being the only vehicle to take flight at Boca Chica, SN5 will be the first Starship prototype to take to the air, at least in a planned manner, should this coming week’s Static Fire test – which was slightly delayed, most recently by hunkering down during the passing of Hurricane Hanna – go to plan. Monday saw two attempts, scrubbing during the day and then aborting during the evening.

The week began with SN5 being pressed through a fuel test, loading the vehicle with Liquid Methane for the first time, following on from its successful cryo test that involved Liquid Nitrogen.

While the testing was aiming for a Static Fire test with Raptor SN27 as early as Wednesday, on-off road closures during the first two days pushed the schedule past Elon Musk’s claim of a hop “later in the week”.

Meanwhile, over at the Production Site, another new Starship was starting to take shape, with the Common Dome for Starship SN8 spotted by Mary, along with a handy sticker to confirm its identification.

This Starship will be the first full-sized vehicle to be made from the 304L steel, as much as that alloy is in a continued state of evolution.

SN8 will also be the initial prototype Starship to gain a nosecone with aero surfaces. Despite the herd of nosecones now on show at the Production Site, SN8’s has now been mated with its five-ring section inside the Windbreak.

Another set of new arrivals were spotted on Tuesday, as a flatbed truck of Kuka welding robots pulled into the Production Facility.

SpaceX has been working on improving its welding techniques over the evolution of Starship construction, self-evident when comparing the latest SN vehicles to the Mk1. 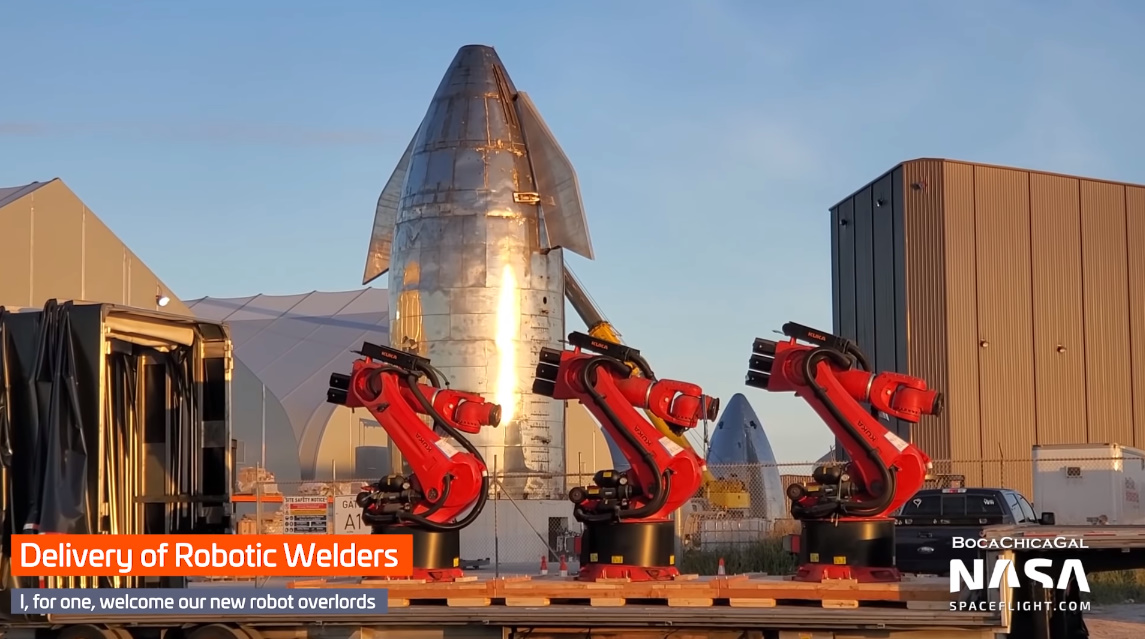 Speaking of Mk1, the mystery surrounding fins from that since-deceased vehicle continued as they were moved into place at the Production Facility for assembly into a structure of its own, potentially as an entrance to a new building or even covering for a cafe for the workforce. However, Elon later clarified on Twitter that they are now set up to provide covering for a seated area at the production facility.

Wednesday saw SN5 return to testing with what was either a repeat – or at least an extended – version of Monday’s Fueling Test. This time SN5 enjoyed a lengthy amount of being fueled with Liquid Methane, highlighted by the occasional double venting, before undergoing detanking operations.

Starship SN5 is alive with the lifeblood of Liquid Methane.

Signs the test went to plan were all-but-confirmed by the cancellation of the following day’s road closures, which pointed to preparations moving towards the Static Fire test as the next objective.

Over at the Production Facility, future Starships continued to take their place in the line, with SN8 – set to become the first fully assembled 304L steel Starship – seeing its Common Dome flipped as part of the assembly sequence we’ve come to follow. 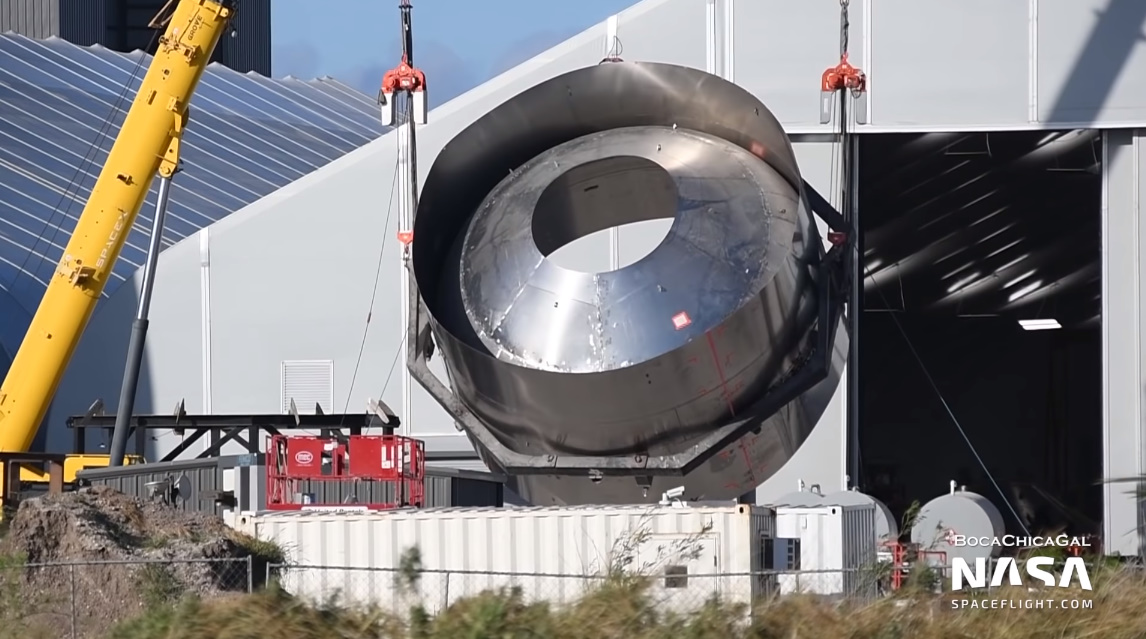 Common Dome Flip for SN8 – Via Mary (@bocachicagal) for NSF

SN8’s Nosecone also continued its preparations inside the Windbreak, as the other nosecones, both old and new, watched on. SpaceX now has an untold number of nosecones – albeit including fairings that will never fly as they were built to allow for construction techniques to be honed – both outside near the Windbreak and also under assembly inside the large Onion Tent buildings.

This building follows on from the original “assembly bay” that has since become the Windbreak for the nosecones and the building that is now known as the Mid Bay, currently housing Starship SN6.

The reason for calling what is still a large building in its own right a “Mid Bay” becomes clear now the “High Bay” is rising from the ground.

With assembly on the second level, this facility will grow at least two more levels, rising to 83 meters tall – as required for the Super Heavy boosters.

Based on the pace of this building’s assembly, it could reach its full height in just a matter of weeks, providing a tantalizing prospect of the first Super Heavy sections to arrive inside the new building before the end of this year.

Work continued on the High Bay as forecasts aligned to show soon-to-be Hurricane Hanna was threatening the local area on its track towards South Texas. This saw SpaceXers begin the process of moving the array of Starship nosecones inside the Big Tents for protection.

Despite Hanna creeping up on the Texas coast, SpaceX felt they had a small window to attempt a Static Fire test of SN5 on Saturday morning, as the tracking showed Boca Chica would escape the severity of the winds and rain from the Hurricane’s landfall.

And we're live with Mary (@BocaChicaGal) and the NSF team for the Starship SN5 Static Fire test with Raptor SN27 at SpaceX Boca Chica.

However, despite several “Pad Clears” during the early part of the test window, the roadblock was eventually removed as crews returned to the pad pointing to a scrubbed Static Fire attempt, which became a scrub for the day as the weather started to deteriorate.

“During a gap in the weather, Mary popped out for a quick drive past the launch site and production facility, highlighting the rare sight of work halting for the storm and even Bluezilla lowered for a rare break to protect any potential impacts of wind gusts.

Following the passing of Hanna, Mary took a trip outside to check on the facility, finding everything – bar some localized flooding – appeared to have avoided any major impact from the storm. Notably, there was a temp roadblock at the launch site, believed to be related to local flooding on the access road.

However, SN5 was then spotted venting by Mary, pointing to SN5 being pressurized overnight before undergoing depressing on Sunday. 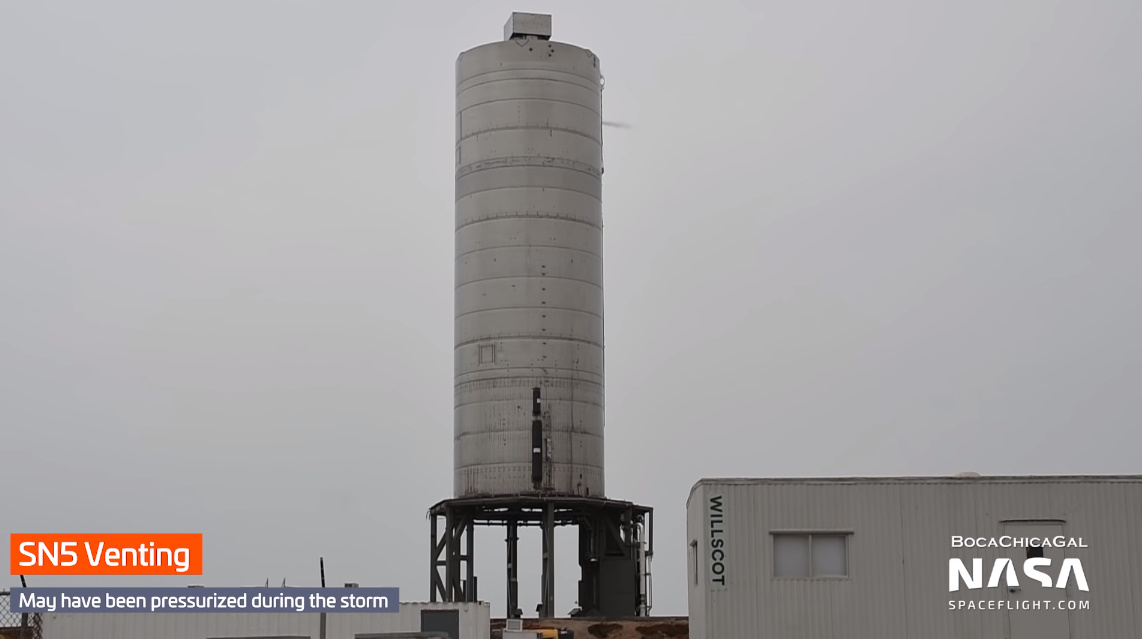 The latest roadblock notices pointed to a potential second attempt to Static Fire Raptor SN27 on Starship SN5 as early as Monday, pending local conditions, not least access due to some localized flooding on the access roads.

Monday did indeed see a scrubbed attempt to conduct a Static Fire test during the day, before a surprise attempt outside of the test window.

I was just out at the launch pad. Connector damaged in the storm, but fixed now. Might be able to fire tonight or at least get to the next issue.

However, that night-time attempt – in itself an amazing view – did get close to engine ignition, with a last second abort called.

Elon noted that they will try for a second attempt on Tuesday.

Solid Rocket Boosters arrive at Kennedy for Artemis 1 and...