Statement Regarding Senator James Paterson’s Connection With The Shovel

"We felt it was time to come clean" 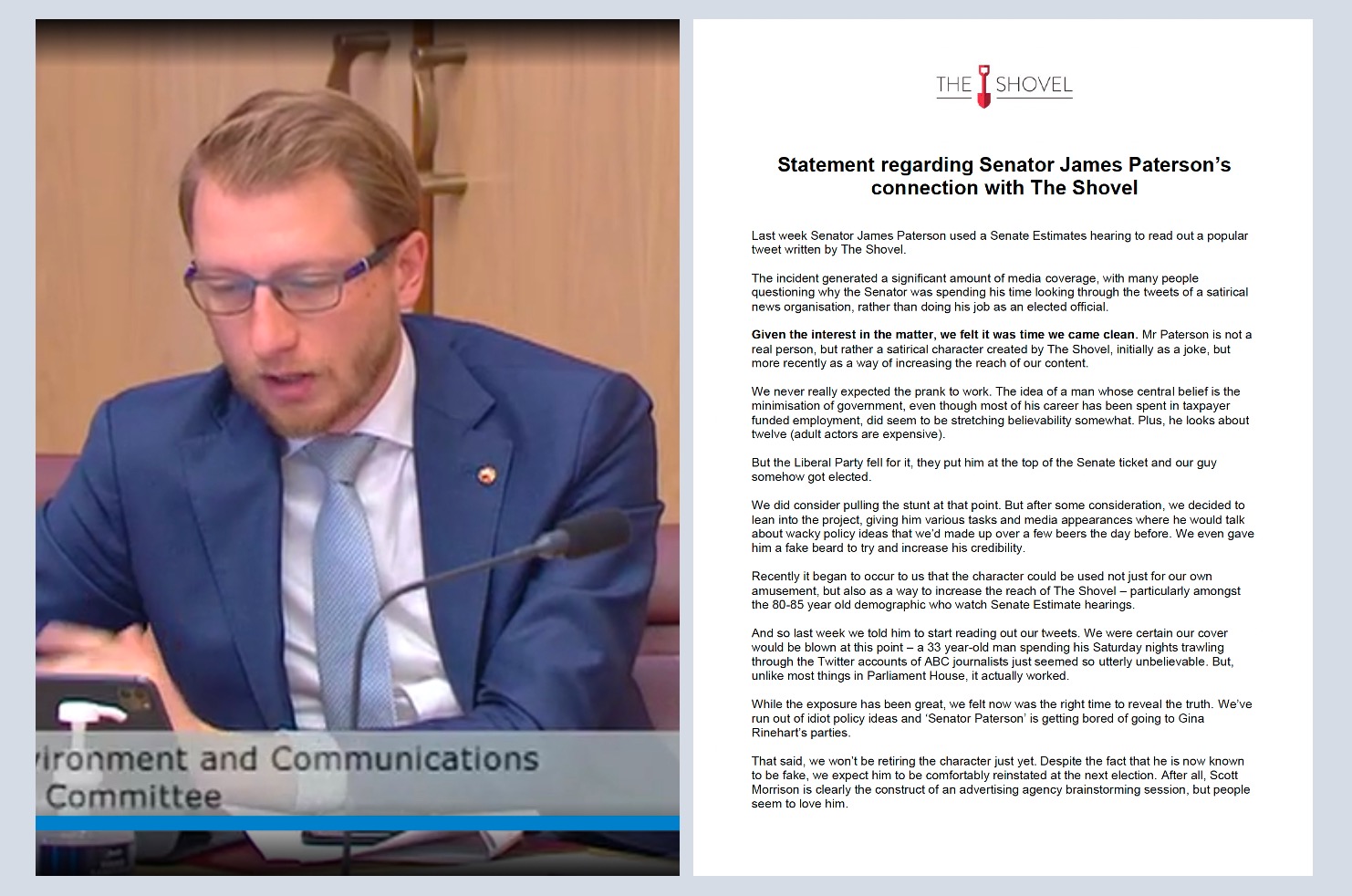 Statement Regarding Senator James Paterson’s Connection With The Shovel

Last week Senator James Paterson used a Senate Estimates hearing to read out a popular tweet written by The Shovel.

The incident generated a significant amount of media coverage, with many people questioning why the Senator was spending his time looking through the tweets of a satirical news organisation, rather than doing his job as an elected official.

Given the interest in the matter, we felt it was time we came clean.

Mr Paterson is not a real person, but rather a satirical character created by The Shovel, initially as a joke, but more recently as a way of increasing the reach of our content.

We never really expected the prank to work. The idea of a man whose central belief is the minimisation of government, even though most of his career has been spent in taxpayer funded employment, did seem to be stretching believability somewhat. Plus, he looks about twelve (adult actors are expensive).

But the Liberal Party fell for it, they put him at the top of the Senate ticket and our guy somehow got elected.

We did consider pulling the stunt at that point. But after some consideration, we decided to lean into the project, giving him various tasks and media appearances where he would talk about wacky policy ideas that we’d made up over a few beers the day before. We even gave him a fake beard to try and increase his credibility.

Recently it began to occur to us that the character could be used not just for our own amusement, but also as a way to increase the reach of The Shovel – particularly amongst the 80-85 year old demographic who watch Senate Estimate hearings.

And so last week we told him to start reading out our tweets. We were certain our cover would be blown at this point – a 33 year-old man spending his Saturday nights trawling through the Twitter accounts of ABC journalists just seemed so utterly unbelievable. But, unlike most things in Parliament House, it actually worked.

While the exposure has been great, we felt now was the right time to reveal the truth. We’ve run out of idiot policy ideas and ‘Senator Paterson’ is getting bored of going to Gina Rinehart’s parties.

That said, we won’t be retiring the character just yet. Despite the fact that he is now known to be fake, we expect him to be comfortably reinstated at the next election. After all, Scott Morrison is clearly the construct of an advertising agency brainstorming session, but people seem to love him.

Australia Swamped By People Wanting To Be Tortured On Small Island For Three Years,...

Australia Swamped By People Wanting To Be Tortured On Small Island For Three Years, After Government Blinks

Thousands of asylum seekers have packed up their things and are headed for Australia after the Government announced it would allow the Biloela family to temporarily reunite in Perth after three years locked in a cage on a small island.

The move angered hardliners within the Government, who said there would be consequences for compassion. “This was a test of our nerve and we blinked,” one MP said.

“Now everyone is going to think that all they have to do to get into this country is spend 1,000 days locked up on an island without any social interaction, and then wait for their child to contract a life-threatening blood disease. Talk about rolling out the welcome mat.

“You can guarantee people smugglers will be ramping up their businesses again. It’s a pretty compelling sales pitch: all you have to do to escape torture in your home country is come and be tortured in Australia. We may as well just set up billboards around the world saying ‘come on in’. We’ve well and truly mucked this up”.

People Looking Forward To Staring At Phone In Groups Again