Baking soda volcanoes are a fun demonstration, and with a few tweaks they can be an experiment, too 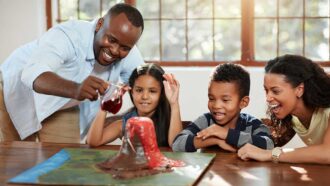 This article is one of a series of  meant to teach students about how science is done, from generating a hypothesis and designing an experiment to analyzing the results with statistics. You can repeat the steps here and compare your results — or use this as inspiration to design your own experiment.

It’s a science fair staple: the baking soda volcano. This simple demonstration is easy to do. That clay mountain “smoking” in front of a poster board can be kind of sad, though. The whole thing looks like it was put together the morning of the fair.

But it’s not too difficult to turn this easy science demo into a science experiment. All that’s needed is a hypothesis to test — and more than one volcano.

Explainer: What are acids and bases?

A baking soda volcano’s foamy rush is the result of a chemical reaction between two solutions. One solution contains vinegar, dish soap, water and a little food coloring. The other is a mix of baking soda and water. Add the second solution to the first, stand back and watch what happens.

The reaction that occurs is an example of acid-base chemistry. Vinegar contains acetic acid. It has the chemical formula CH3COOH (or HC3H2O2). When mixed with water, acetic acid loses a positively charged ion (H+). The positively charged protons in the water make the solution acidic. White vinegar has a pH of about 2.5.

Explainer: What the pH scale tells us

Baking soda is sodium bicarbonate. It has the chemical formula NaHCO3.  It is a base, which means that when mixed with water, it loses a negatively charged hydroxide ion (OH-). It has a pH of about 8.

Carbonic acid is very unstable. It then breaks apart quickly into carbon dioxide and water.

Carbon dioxide is a gas, which makes the water fizz like soda pop. If you add a little dish soap to your acid solution, the bubbles will catch in the soap. The reaction produces a big fwoosh of foam.

Acids and bases will react together until there are no excess H+ or OH- ions present. When all the ions of one type are all used up, the reaction is neutralized. This means that if you have a lot of vinegar, but very little baking soda (or vice versa), you’ll get a small volcano. Varying the ratio of ingredients can change the size of that reaction.

This leads to my hypothesis — a statement I can test. In this case, my hypothesis is that more baking soda will produce a larger explosion.

To test this, I need to make volcanoes with different amounts of baking soda while the rest of the chemical reaction remains the same. The baking soda is my variable — the factor in the experiment that I am changing.

Here’s the recipe for a basic baking soda volcano:

(Safety note: It’s a good idea to wear gloves, sneakers and eye protection such as glasses or safety goggles for this experiment. Some of these ingredients can be uncomfortable on your skin, and you don’t want to get them in your eyes.)

The explosion happens very quickly — too fast to mark its height accurately on a wall or yardstick. But once the eruption happens, the foam and water fall outside the bottle. By weighing the bottles before and after the reaction, and adding in the mass of the baking soda and water solution, I can calculate how much mass got ejected from each eruption. I could then compare the mass lost to show if more baking soda produced a larger explosion.

But that’s not quite the whole story. Because I added different amounts of baking soda and water to the bottles, there might not be as big of a difference here as I think. The extra mass from the 100-gram bottles, for instance, could just be because the reaction started out heavier.

To confirm that these results are different, I need to run statistics. These are tests that will help me interpret my results. For this, I have three different amounts of baking soda that I need to compare to each other. With a test called a one-way analysis of variance (or ANOVA), I can compare the means (in this case, the average) of three or more groups. There are calculators on the internet where you can plug in your data to do this. I used this one.

The test will give me a p value. This is a probability measure of how likely I would be to get a difference between these three groups as large as the one I have by chance alone. In general, scientists think of a p value of less than 0.05 (five percent probability) as statistically significant. When I compared my three baking soda amounts, my p value was less than 0.00001, or 0.001 percent. That’s a statistically significant difference that shows the amount of baking soda matters.

I also get an F ratio from this test. If this number is around one, it usually means that the variation between the groups is about what you would get by chance. An F ratio bigger than one, though, means the variation is more than you’d expect to see. My F ratio was 53, which is pretty good.

My hypothesis was that more baking soda will produce a larger explosion. The results here seem to agree with that.

Of course there are things that I could do differently next time. I could make sure that my bottle weights were all the same. I could use a high-speed camera to measure explosion height. Or I could try changing the vinegar instead of the baking soda.

No, There Isn’t A Black Hole At The Center Of The Earth

How physics lets a toy boat float upside down

A weird cousin of our solar system is caught on camera