A fan shares a picture of their pet snake dressed as the Polka-Dot Man from The Suicide Squad, and director James Gunn totally approves.

A fan has shared a picture of their pet snake dressed as the Polka-Dot Man from , and James Gunn approves. David Dastmalchian will portray the Polka-Dot Man in the very first on-screen iteration of the character. In the comics, the Polka-Dot Man is one of Batman's most notorious villains. He often tries to rival the Dark Knight but fails to gain the respect of the Gotham City underworld.

Perhaps one reason the Polka-Dot Man often failed to gain the ranks in Gotham is due to his campy and ridiculous costume. Not surprisingly, his costume is white and covered in colorful polka-dots. This is true both in the comics and in the upcoming movie. He has a red belt and red gladiator glasses to complete the over-the-top look. Overall, little was changed between the comic book costume and the movie costume.

Despite the quirky supervillain suit, it seems like fans are already excited to see . A fan account on Twitter just posted a picture of a snake dressed as the Polka-Dot Man. Gunn, who is no stranger to interacting with fans on social media, shared the image of the snake wearing the iconic white suit with colorful polka-dots. The snake even has a pair of aviators on top of its head to finish off the look. Check out the photo below:

The fact that his supervillain costume was accurately translated to the big screen from the comics with few changes is most likely indicative of the movie itself. Based on the Polka-Dot Man's outlandish costume, along with several of the other characters' wild costumes, the film is likely going for a comics-accurate and zany approach. Director James Gunn is known for his eccentric humor, and The Suicide Squad looks to deliver. The villain of the movie is a giant starfish, after all.

If fans are already posting cosplays based on characters from a film that no one has seen, then it's safe to say that The Suicide Squad might be a big hit. This would be huge for DC and Warner Bros., who are looking to chart a path forward post-Synderverse. Furthermore, if Gunn can get another hit out of an eccentric property like Guardians of the Galaxy and now The Suicide Squad, then this could solidify his place as one of the biggest directors in Hollywood. Not many filmmakers can make characters like these work, but Gunn already looks poised to do just that yet again.

More: The Suicide Squad: Why The Thinker Is Key To Defeating The New Villain

In this edition of Sequel Bits: Top Gun: Maverick made quite an impression on Christopher McQuarrie Will a Detective Pikachu sequel ever happen? Tom Cruise hangs off a train in a Mission: Impossible 7 photo The Meg 2 will start production in 2022 And more! Writer/director Christopher McQuarrie is extremely busy making Mission: Impossible movies, […] The post Sequel Bits: Top Gun: Maverick, Mission Impossible 7, The Meg 2, and More appeared first on /Film.

In this edition of Sequel Bits:

Writer/director Christopher McQuarrie is extremely busy making Mission: Impossible movies, but as Tom Cruise’s closest cinematic collaborator, he was also brought onto Paramount’s Top Gun: Maverick to help work on the script for that long-anticipated sequel. And in a recent Twitter Q&A, McQuarrie said Top Gun 2 is “the best film I’ve been a part of. I cannot wait to see it unleashed on an audience.” McQuarrie has been behind some incredibly entertaining movies, so that quote should help Top Gun fans breathe a sigh of relief at the prospect of this sequel actually being good. 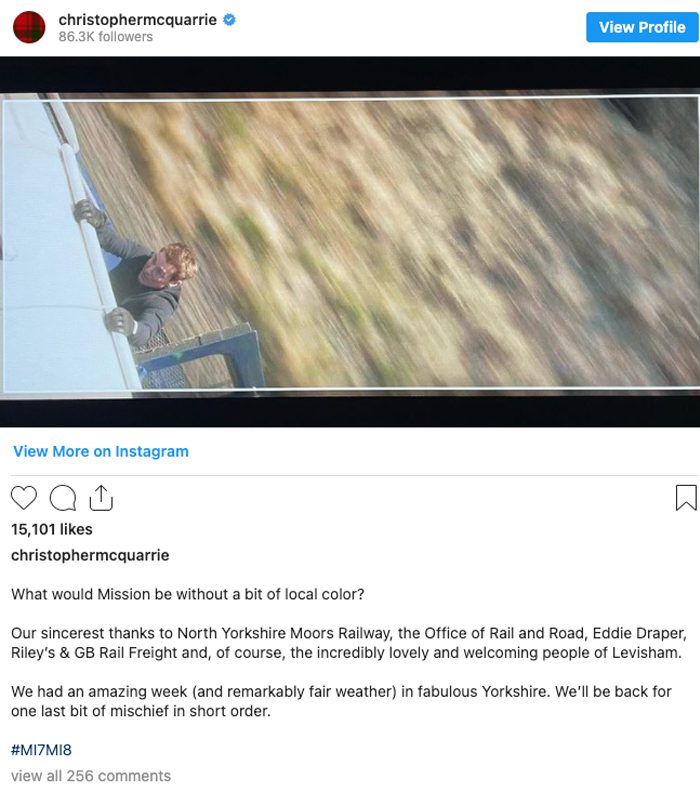 Speaking of McQuarrie and Cruise, they’re currently working on the next Mission: Impossible movies, which will feature Cruise returning to a train as an action setpiece for the first time in the franchise since the 1996 original. The big difference? The train sequence in De Palma’s movie was clearly enhanced by CG, and this one looks like a more modern-day Cruise stunt that was performed for real and appears to have been very dangerous. 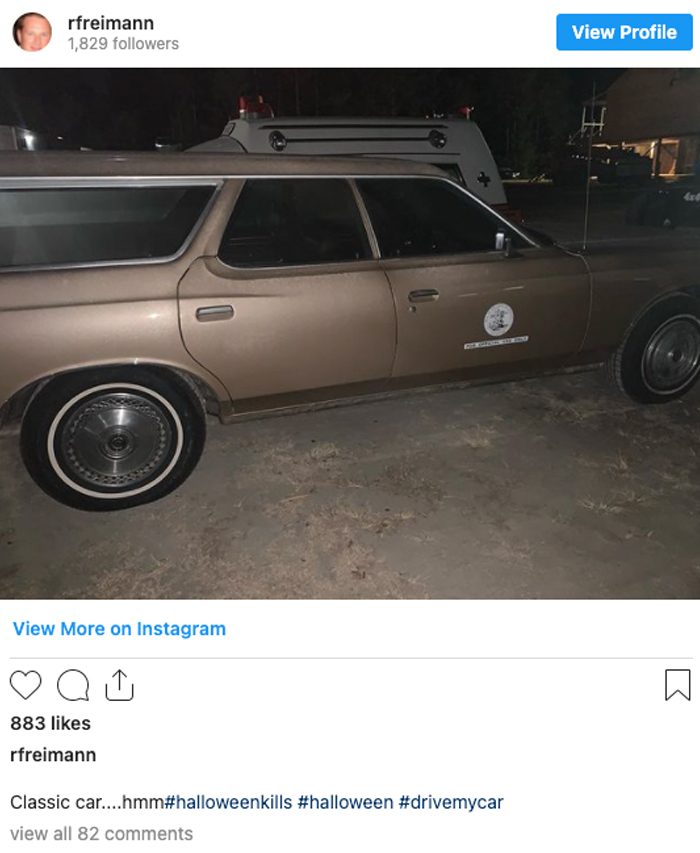 Halloween Kills producer Ryan Freimann shared this image from the set of David Gordon Green‘s upcoming sequel to the Halloween reboot. The car is a throwback to a vehicle that was featured in the original movie on the first night Michael Myers escaped, and coupled with that old school ambulance in the background, I think it’s safe to say this movie will feature a flashback to one of the key moments in the lives of The Shape and protagonist Laurie Strode (Jamie Lee Curtis).

Prepare yourself for more shark punching action. In an interview with Collider, The Meg star Jason Statham revealed that production on the sequel is going to begin early next year. “We’re gonna start shooting in January, if I get my dates right,” he said. “Ben Wheatley is the director, I’m very excited to work with him. I’m thrilled to get going, it’s been a while. We’ve been waiting around for the right scripts to come in and the right director to turn up, and we’ve got all those things and they’re all stacked up now…we have a great shorthand already. We’ve got similar taste. I like his movies, I think he’s a brilliant director. I think we’ve got a good shot at making something good.”

Detective Pikachu was meant to kick off a whole series of Pokemon movies, but when it comes to talk of a sequel, there’s been crickets for a long while now. Speaking with Inverse, star Justice Smith said that he would “love to participate in Detective Pikachu 2,” but he is not confident it will ever happen. “I think we have to just kind of bury our hopes. I don’t think it’s going to happen. I really hope so though. Honestly, I’m such a huge fan, who knows, who knows? I hope so.”

This final entry is technically a remake and not a sequel, but bear with me anyway: Deadline reports that Ocean’s Eleven actor Andy Garcia is co-starring with singer Gloria Estefan in another remake of Father of the Bride, following in the footsteps of Spencer Tracy and Steve Martin. Gaz Alazraki (We Are the Nobles) is directing, and Dora and the Lost City of Gold actress Isabela Merced and Adria Arjona (Pacific Rim Uprising) are set to co-star in a version that will tell this tried-and-true story through the lens of a Cuban American family.