Sunil Gavaskar recalled a hilarious encounter with PBKS pacer Jhye Richardson on a Dubai-Mumbai flight, ahead of the Punjab Kings clash against Rajasthan Royals. Punjab Kings handed a debut to fast bowler Jhye Richardson in their opening game of the Indian Premier League 2021 season against Rajasthan Royals. It hardly came as a surprise with Punjab struggling with the fast-bowling attack in the previous season and spending ₹14 crores on the Australian speedster at the auctions. Sunil Gavaskar Said That Jhye Richardson Looked Like A School Kid And He Didn’t Recognize The Pacer In Flight Speaking before the start of 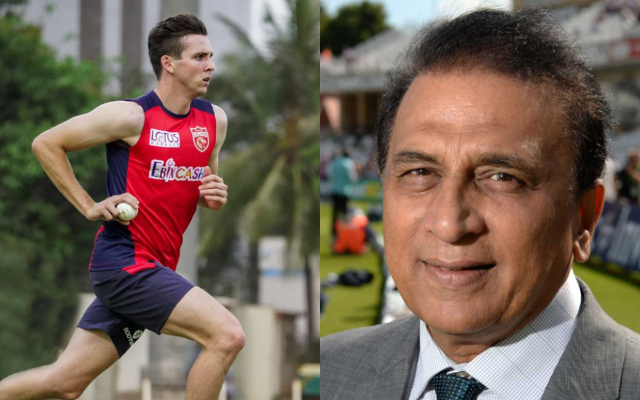 Sunil Gavaskar recalled a hilarious encounter with PBKS pacer Jhye Richardson on a Dubai-Mumbai flight, ahead of the Punjab Kings clash against Rajasthan Royals.

Punjab Kings handed a debut to fast bowler Jhye Richardson in their opening game of the Indian Premier League 2021 season against Rajasthan Royals. It hardly came as a surprise with Punjab struggling with the fast-bowling attack in the previous season and spending ₹14 crores on the Australian speedster at the auctions.

Speaking before the start of the match, former India cricketer Sunil Gavaskar recounted a hilarious encounter with Richardson that happened during Dubai to Mumbai flight.

“I was sitting next to Jhye Richardson in the Dubai to Mumbai flight about 8-10 days ago,” Sunil Gavaskar recalled.

“He looked like a school kid to me, in his shorts. I did not recognize him. The aircraft was pretty empty. He sat one row behind me because of social distancing,” Sunil Gavaskar further added.

“Simon Doull was on the flight. I said to him – you were talking to him, who was he – and he told me it’s Jhye Richardson. And I thought he was someone who had just come out of school,” he further said.

Jhye Richardson, the Australian pacer who was bought by Punjab Kings for Rs 14 crore at IPL 2021 auction, has said that the price tag was scary but life-changing at the same time. Jhye Richardson has played 2 Tests, 13 ODIs, and 14 T20Is for Australia so far. He has scalped 82 wickets from his 67 T20 matches.

Sunil Gavaskar further explained how the addition of Jhye Richardson and pacer Riley Meredith will help KL Rahul this season.

“But Rahul who captained Punjab last time is more experienced than Sanju Samson. If you look at his pace attack with Jhye Richardson and Riley Meredith – he has a better pace attack than he had last time around. That will make the difference,” Gavaskar went on.

“But if he (Richardson) bowls well, and we have seen him bowl for Australia, that will be the thrust that both these bowlers (Riley Meredith and Jhye Richardson) can provide them, that will be exactly what Punjab would be looking for,” Gavaskar signed off.

Punjab Kings (PBKS) overcame a spirited Rajasthan Royals (RR) challenge, led by a sensational Sanju Samson, and emerged victorious in a high-scoring thriller in Match 4 of the IPL 2021 at the Wankhede Stadium in Mumbai on Monday. PBKS skipper KL Rahul led from the front, with a defining knock of 91 before Arshdeep Singh defended 13 runs in the last over, helping the side seal a 4-run win.

There was no stopping the RR skipper Sanju Samson though as the right-hander brought up a magnificent century, becoming the first batsman to get a hundred on IPL captaincy debut. Jhye Richardson and Riley Meredith were expensive but picked 1 wicket apiece for PBKS. Young pacers Chetan Sakariya of Rajasthan and Arshdeep Singh of Punjab picked 3 scalps each.

Rajasthan Royals and Kings XI Punjab dished out another high-scoring thriller, and Punjab ended up on the winning side as they opened their account in the 14th edition of the league. Sanju Samson’s 119 might not have secured a win for his team Rajasthan, but makes him the batsman in the Rajasthan camp to watch out for.

More importantly, it does assure the Rajasthan Royals management that the added burden of captaincy will not necessarily have an impact on his batting. Also deserving of plaudits are Arshdeep Singh, Deepak Hooda, and Chetan Sakariya as the uncapped Indians would’ve probably caught the national selector’s notice with their efforts.

Arshdeep Singh Reveals His Heart Was Beating Fast When He Was Set To Bowl The Final...

David Gower names Virat Kohli as captain in his current...

Whenever MS Dhoni Chatted With Players, Everything Automatically...

Long Break Allowed Virat Kohli To Become An Even Better...