Riva is scheduled to deliver the first 76’ Perseo Super to its owner this summer after upgrading the Italian brand’s popular Sportfly model. The post Super version of Riva 76’ Perseo appeared first on LUXUO. 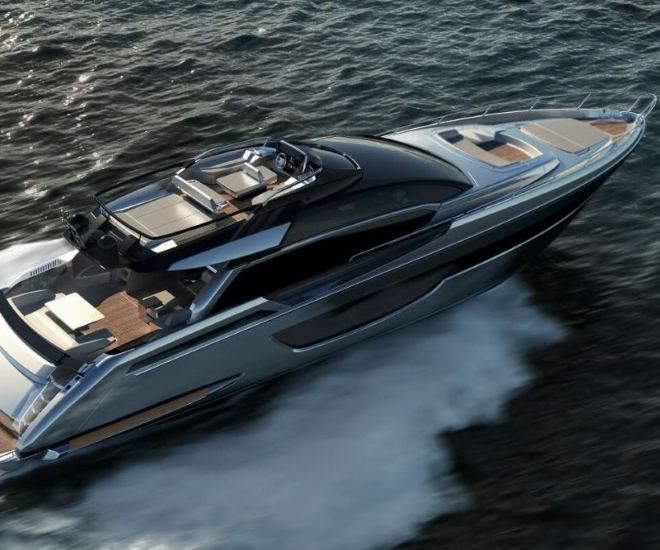 Riva has revealed details of the 76’ Perseo Super, with the first unit to be handed over to its owner this summer. The new version of the popular Perseo sits in the Italian builder’s Sportfly range between the 66’ Ribelle and 88’ Folgore, the latter launched last year.

The 76-footer has an 18ft beam and is a design collaboration between Officina Italiana Design co-founder Mauro Micheli, Ferretti Group’s Product Strategy Committee led by Piero Ferrari and its Engineering Department.

The new model reaches 32 knots and has a cruising speed of 28 knots with two 1,550mhp MAN V12 engines, while the optional 1,800mhp versions push those figures to 37 and 32 knots respectively. The yacht is fitted with automatic Humphree dynamic trim interceptors, while options include a Seakeeper NG18 stabiliser and Aventics manoeuvring joystick with docking mode.

The aft cockpit has a sofa and a dining table that can be lowered and covered with cushions to create a big sun pad. Options include a drawer refrigerator under the sofa and a corner bar with Corian countertop, fridge, icemaker and sink.

The spacious sun deck has a 4sqm sun pad behind a forward-facing sofa, plus a central helm station flanked by two long sofas, while the foredeck has a sofa that can be sheltered by a hood and a big sun pad forward.

The interior is incredibly light due to over 40sqm of glazed surfaces in the hull and superstructure, which features a glass roof with an opening section over the lounge. The standard finish is a sand-coloured oak, matched with light and dark lacquer and polished stainless-steel detailing, while rosewood is an option as the featured wood.

The lower deck has a lounge with a big L-shaped sofa, the galley is opposite, while the standard layout includes three cabins with ensuite bathrooms. The crew cabin is aft, accessible from the cockpit and adjacent to the engine room.

The garage can house a 3.25m tender, while almost the entire swim platform can be lowered into the water. On request, a second water toy can be installed on the swim platform and two Seabobs can be stored in the garage on either side of the tender.

Voltaire 33 Sky: This electric powercat is as eco-friendly...