NASA’s Exploration Ground Systems (EGS) program is looking at a wide range of forecasts for… The post Ten month schedule to ready SLS for Artemis 1 launch after Core Stage arrives at KSC appeared first on NASASpaceFlight.com. 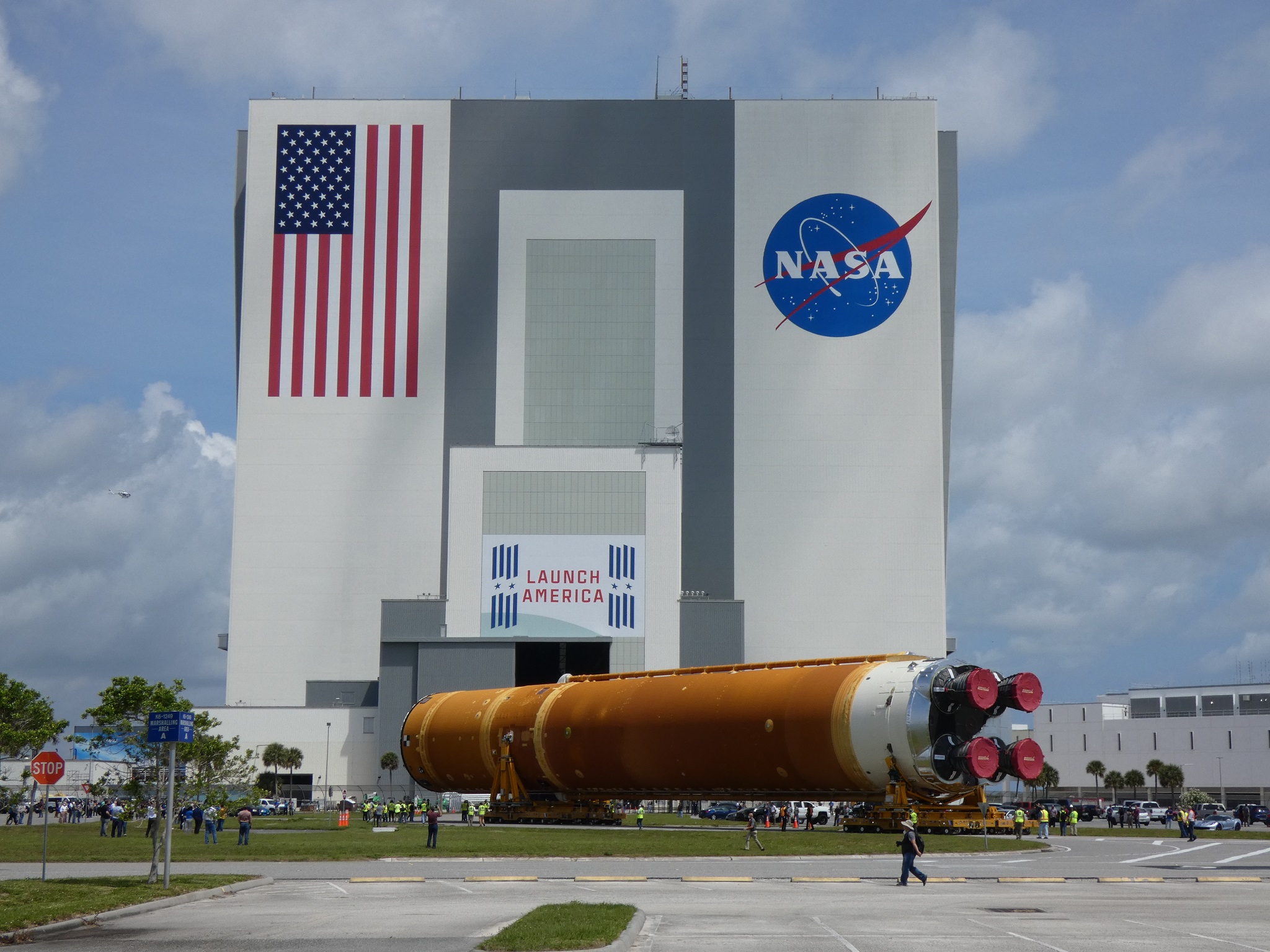 NASA’s Exploration Ground Systems (EGS) program is looking at a wide range of forecasts for when they can complete testing necessary to be ready to launch Artemis 1. The Core Stage of NASA’s first Space Launch System (SLS) vehicle arrived at the Kennedy Space Center and was moved into the Vehicle Assembly Building (VAB) on April 29 to prep for stacking with the new launch vehicle’s Solid Rocket Boosters, which are already in place on the Mobile Launcher in High Bay 3.

Approximately six months of work is anticipated to finish assembly and complete a long series of tests and checkouts of SLS and the Orion spacecraft it will send to the Moon, but current forecasts of this first-time integration work estimate closer to ten months to complete the necessary operations. After the vehicle is put together, weeks and weeks of testing to make sure SLS and Orion are properly talking to each other, as well as the EGS ground infrastructure, will follow.

Much more time needed for testing than stacking

The SLS Core Stage was the final Artemis 1 component to ship to KSC, and its long-awaited arrival allows the EGS and prime test operations and support contractor Jacobs to now put the whole vehicle together. Once final preparations are completed, the Core Stage will be mated to the SLS Boosters, which will allow the vehicle’s upper stage and eventually the Orion spacecraft to be put in place.

When the vehicle, ground systems, and launch team are ready to launch will depend on the progress of the months of integrated testing ahead.

“What I would tell you is that, from that standpoint, we fully expect it to take ten months to get everything completed and to get the vehicle launch ready,” Cliff Lanham, NASA Senior Vehicle Operations manager for EGS at KSC, said in a recent interview.

The majority of the 10-month timeline is taken up by the Integrated Testing and Check-Out (ITCO) of the connections between the spacecraft, launch vehicle, and ground systems after all the elements are mated. Some of that time includes special testing prior to this first flight of all the Exploration Systems Development division programs with Artemis 1.

There are two phases of ITCO in this first launch processing flow. When SLS is assembled for the first time, the launch vehicle will go through a first round of tests with an Orion mass simulator standing in for the spacecraft.

After an umbilical retract test and a special pre-Artemis 1 structural modal test, the Orion simulator will be removed and replaced with the Orion spacecraft. A second round of integrated testing will then take place with the fully assembled Orion-SLS flight vehicle.

EGS and Jacobs started Artemis 1 launch processing last year; the SLS Boosters are currently fully stacked on the Mobile Launcher and the Orion spacecraft is being loaded with its flight commodities in the Multi-Payload Processing Facility (MPPF).

The Core Stage Green Run Hot-Fire that was completed on March 18 at the Stennis Space Center was the final major standalone development test for the program, and the stage departed the test facility early on April 22 in the agency’s Pegasus barge following a month of refurbishment. After arriving on dock at the Launch Complex 39 Turn Basin on the evening of April 27, the stage was offloaded from Pegasus and rolled into the low bay of the VAB on April 29. 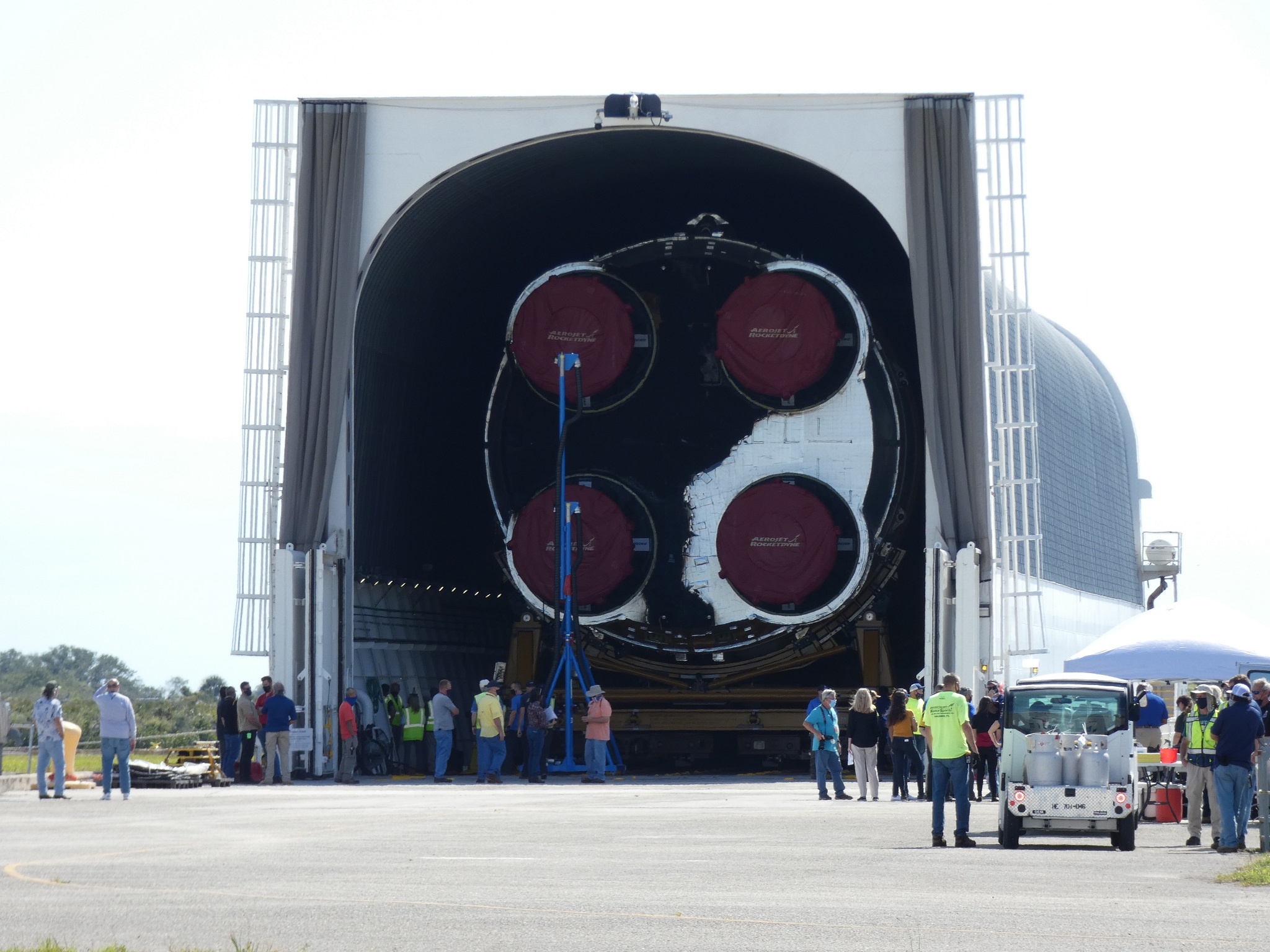 (Photo Caption: The heavily-charred base heatshield of Core Stage-1 inside the Pegasus barge at KSC on April 28. Following arrival at Kennedy the evening before, purge equipment was disconnected from the stage to clear the way for it to be rolled off the barge. Inspections of the heatshield thermal protection system (TPS) were deferred until after arrival at KSC since they weren’t needed for shipment from the Stennis Space Center and could be done in parallel with other work in Florida.)

Now that the Core Stage is in the VAB, the Artemis 1 vehicle can be fully assembled in High Bay 3.

“We will work in the Transfer Aisle of the VAB putting on our linear shaped charge, working on the Core Stage systems tunnel,” Lanham said. “Mating of the Core Stage and finishing of that work in the Transfer Aisle is a critical path. So once we get it up and onto the Booster stack, then we will go [through the] whole flow of mating the [rest of the] vehicle and then getting into that testing and getting to WDR. And that is our critical path [to launch].”

Some refurbishment work following the Green Run Hot-Fire was required before the Core Stage could be transported to KSC, such as on the Aerojet Rocketdyne RS-25 engines, but additional work on the thermal protection system (TPS) on the Core was deferred until after arrival. Some of that “traveled” work will be performed while the stage is horizontal in the Transfer Aisle of the VAB before it is ready to be lifted for mating to the Boosters.

“The TPS is a big part of what traveled work is and [is a big part of] the procedures that Jacobs and Boeing are working [on] in conjunction,” Nathalie Quintero, Boeing SLS Launch Operations Aerospace and Systems Engineer, explained. Quintero said inspections to determine what work needed to be done had started on the stage inside Pegasus after arrival at KSC even before the move into the VAB.

One of the traveled work tasks involves inspections of the base heatshield TPS. “We were going to try to evaluate that at Stennis, but our timeline there was shortened because we needed to get here to KSC. And with the refurb that the engine team had to do, they had to have primary access to the base heatshield area,” Michael Alldredge, NASA SLS TPS Subsystem Manager, said. 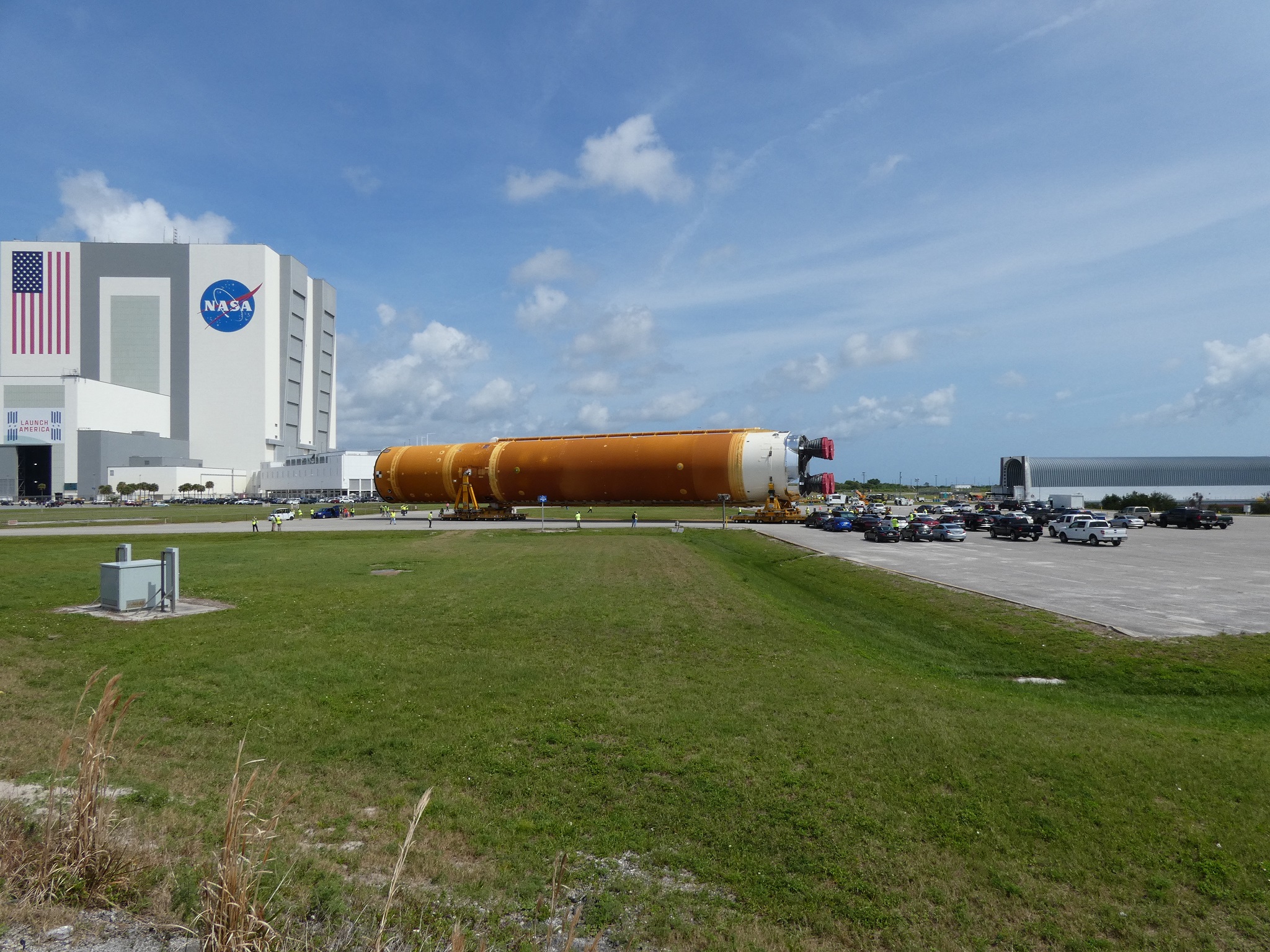 (Photo Caption: NASA EGS and Jacobs teams move Core Stage-1 into the KSC Press Site parking lot during offload from the Pegasus barge and rollover to the VAB on April 29. The stage rolled off the barge aft end first but needed to roll into the VAB forward end first. The two pairs of self-propelled motorized transporters (SPMT) that made the move have six degrees of freedom and can make precise turns.)

“We [couldn’t] get in there from a time standpoint to do the in-depth analysis and post-test assessment that we wanted to get done, so that work will be performed here at KSC.”

The remainder of the inspections and repairs to areas of the stage’s thermal protection system (TPS) will be completed at KSC, but with less weather disruptions inside the VAB versus outside in the B-2 Test Stand at Stennis; the foam inspections and repair work can also be done in parallel with other required work that needs to be done before the Core Stage can be mated to the Boosters.

“The [TPS] work is being broken down into access constraints,” Alldredge explained. “Once you [mate the Core Stage] with the Boosters, [there are areas] you can’t get to. So the work is being prioritized such that we do the things that we have to do in the Transfer Aisle and then everything else I believe will go in [High Bay 3 after stacking].”

Some of the pre-mate TPS work, Alldredge said, will include repairs to some areas of SOFI (Spray-On Foam Insulation) on the intertank to liquid hydrogen (LH2) tank flange area.

Once the Core Stage is hard-mated to the Boosters, parallel activities from the integrated operations team will occur to simultaneously finish assembling the SLS hardware while preparing for both vehicle checkouts and the special Integrated Modal Test (IMT) later in the flow. “We bring in the Core Stage and mate it. Then we’ll get into modal [test] preps,” Lanham said. “We’ll install sensors and start cable routing, but also along those same lines we start bringing the stack together, if you will, with the hardware mates.”

Many, many years in the making, the first flight SLS core stage is entering the VAB Transfer Aisle ahead of Artemis-1.

Getting the Core in place on the Mobile Launcher will also allow some Mobile Launcher umbilicals to be mated, which will help expedite powering up SLS and beginning checkouts. “The goal as we stack the Core Stage will be to get all the umbilicals mated as soon as possible to have that connectivity to get into testing and all the things that are going to come once we’ve successfully mated the arms,” said Andrew Shroble, Integrated Operations Flow Manager for Jacobs.

“The Tail Service Mast Umbilicals (TSMU) will actually require internal access to the engine section to be able to vent the lines down before we actually mate the umbilicals. So that’s one of the first things that we do [after mating the Core Stage and the Boosters]. The Core Stage Intertank Umbilical, we’re able to swing that out and mate that as soon as possible. It doesn’t require internal access, so that’ll be something we look to do right out of the gate.”

In parallel, stacking will continue, first with the Launch Vehicle Stage Adapter (LVSA). The LVSA will be bolted to the forward skirt of the Core Stage; that mated flange will then be closed out with foam. The LVSA will stay with the Core Stage in flight and has a frangible joint assembly on the top to separate the ICPS.

After the LVSA is stacked, the Interim Cryogenic Propulsion Stage (ICPS) – currently in the MPPF where its attitude control system tanks will be filled with hydrazine – will be brought to the VAB and stacked. At this point, flight vehicle assembly will stop and the Mass Simulator for Orion will complete stacking for the first phase of verification testing along with the umbilical test and the Integrated Modal Test.

“At that point we’ll have the stack that we’re going to use for modal,” Lanham said.

Equally as important as the structural attachments between the launch vehicle elements are the electrical and data connections which allow the computers in the Core Stage to talk to the avionics in the Boosters. The SLS computer system in the Block 1 vehicle covers the Core Stage and the Boosters; the ICPS is a United Launch Alliance (ULA) product, derived from the Delta Cryogenic Second Stage (DCSS), which has its own, self-contained computer and guidance system that is standing by to take over control of the flight after the Core separates.