Closest thing I'll get to a Jane Austen world. 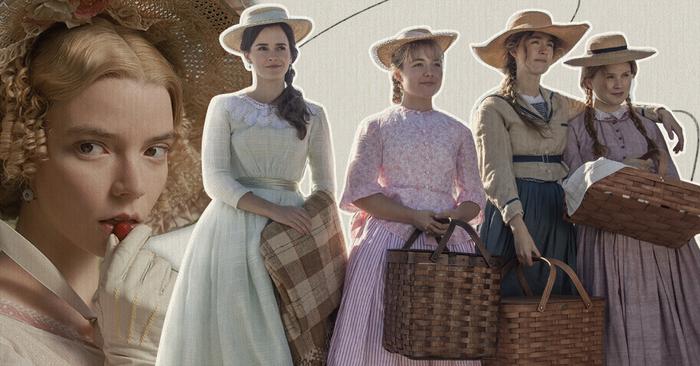 If you've recently watched Bridgerton and are on a high from the exquisite fashion and slow-burn romances, then welcome to the world of escapism that is period dramas. Stories like Pride and Prejudice, Emma, and Little Women have always been comforting films for me, as they created a world that I could jump to when I needed a break from reality.

The rules and order of the time aren't exactly aspirational, but it's the almost expected storylines and over-the-top costumes that differ from the majority of entertainment today. It wasn't till recently that I realized a variety of fashion trends commonly seen in movies shot in this era are making their way into the mainstream fashion scene, from the runways of ready-to-wear collections to Paris Couture Week. Dior's recent couture collection featured empire waists and embellished gowns that people couldn't help but compare to the style of the British Regency era, which I don't mind at all.

If you're also fascinated with the grandeur style of high society, I've rounded up six trends that I've spotted throughout the films that you can shop now or take some inspiration from. From exaggerated collars to corsets, I'll take anything I can to pretend I'm awaiting suitors like Duke of Hastings or my personal favorite, Mr. Darcy. You can keep it simple like the March sisters or go full-on dramatics like Marie Antoinette, this is a judgment-free zone.

According to data from Klarna, there was a 140% increase in searches related to corsets in the U.S. app compared to the week before Bridgerton was released on Netflix. From Dion Lee to Amazon styles, girls everywhere are reaching for corsets to incorporate touches of allure into their outfits.

Whether they're hanging around your neck or stitched into your outfit, pearls add a subtle touch of elegance to your ensemble. I've always preferred pearls to jewels, as I think they're more versatile and can be dressed up or down. They were also spotted as the accessory choice by many at the Inauguration, from J.Lo and Jill Biden to poet Amanda Gorman.

If a sleeve isn't dramatic, I don't want it. Puff sleeves are worn by both the men and women of period dramas, and either way, it's something I want to be adding to my wardrobe. It's a small detail that can make a big difference, making your average blouse or cardigan much more interesting.

While I may not be wearing collars underneath a ball gown à la Little Women, I will be using them to add a little touch of drama to my daily looks. They take what would've been an otherwise basic poplin top and add a touch of playfulness to it, which I'm a fan of. Plus, who doesn't want to look like they're popping over for a visit to Theodore Laurence's house?

Yes, floral print isn't the most groundbreaking trend, but the elegance of vintage florals featured in period dramas differs greatly from the majority you see at mass fashion retailers today. ThredUp noted 30% increase in searches for floral items since Bridgerton aired, so it's clear people are on the hunt for that perfect old-fashioned floral. If it looks like it could be a print on your grandmother's fine china, or you can envision yourself taking a stroll through a royal garden in it, then you've nailed the regency era print.

Lace is a common part of the fashion seen in the high-society, from the characters' gloves and gowns to their sleepwear. The fabric has both risqué and romantic elements to it and is commonly featured amongst designers like Rodarte and Self-Portrait, whose designs look like they could've been picked out of a regency ball.

If It's Not Cropped, I Don't Want It: The 30 Best Short Jackets To Buy Now

The Under $100 Update: Everything That's Cool and Trendy at Nordstrom Right Now

I Wasn't Sure About Buying This $19 Amazon Bikini, But...

I'm 45, and These Beauty Products Make My Skin Glow Like...