Author: Kamal Ahmed, London On 10 February 2021 the opposition Bangladesh Nationalist Party (BNP) did the unthinkable and demanded a UN investigation into alleged corruption in the country’s military. The call followed an Al Jazeera documentary alleging that the army’s chief secretly provided illegal support to his two fugitive brothers, with the tacit approval of Prime […] The post The Bangladesh army’s increasing role in civilian affairs first appeared on East Asia Forum. 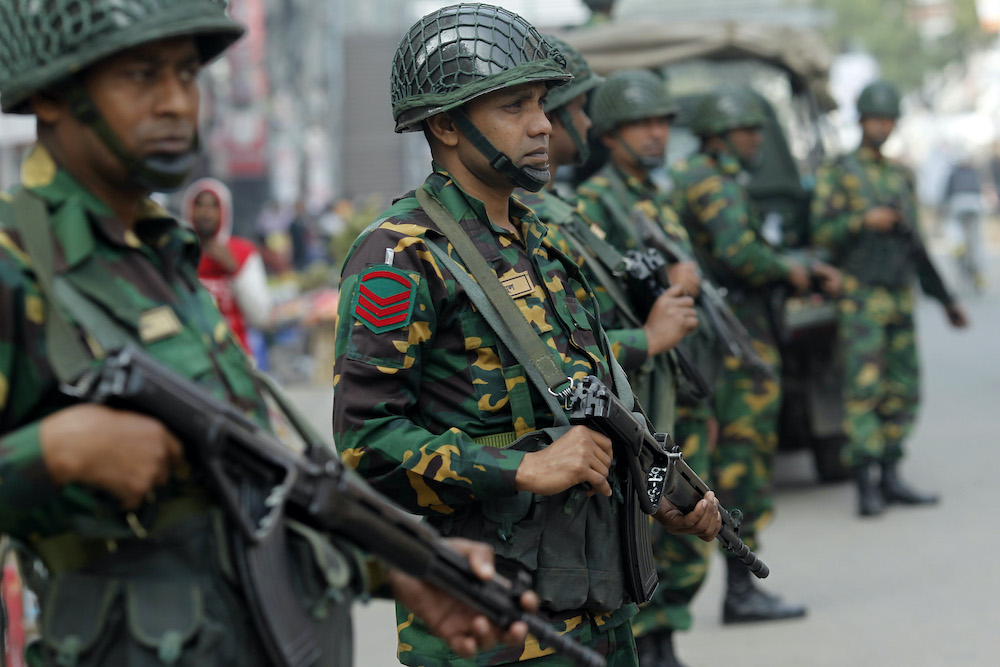 On 10 February 2021 the opposition Bangladesh Nationalist Party (BNP) did the unthinkable and demanded a UN investigation into alleged corruption in the country’s military. The call followed an Al Jazeera documentary alleging that the army’s chief secretly provided illegal support to his two fugitive brothers, with the tacit approval of Prime Minister Sheikh Hasina. It also claimed that the army acquired Israeli-made spying equipment that can be used against the opposition and critics of the government.

The opposition’s demand followed an earlier call from the United Nations. Stéphane Dujarric, spokesperson for the UN Secretary-General, told reporters: ‘The allegation of corruption is a serious matter that should be investigated by the relevant authorities’. He also rebuffed the army’s claim that the surveillance equipment was meant for UN peacekeeping operations.

The government has so far ignored these demands, with no immediate fall out. But given the country’s recent democratic backslide and violent military past, some discomfort is very likely. Bangladesh has long struggled to reconcile the brutal killing of its founding leader Sheikh Mujibur Rahman, father of Sheikh Hasina, by disgruntled members of the army. Subsequent turmoil within the military led to the killing of another president, Ziaur Rahman, and dozens of other officers.

Controversies surrounding defence procurement, the army chief and concessions for his fugitive brothers shed new light on the country’s civil-military relationship. Until now, the political parties founded by two former military rulers — the Bangladesh National Party and the Jatiya Party — were widely seen as enjoying more support from the armed forces than the Awami League led by Prime Minister Hasina. Recent developments indicate otherwise, and opposition parties allege that the inaction of the armed forces in preventing election shenanigans in 2018 allowed the Awami League to hold on to power.

The expansion of the armed forces under the current regime has been remarkable. The most significant addition is the ‘Forces Goal 2030’, a secretive policy document for reshaping the armed forces introduced in 2009 and revised in 2017. The army claims that the policy is based on the government’s stated principle of: ‘Friendship to everyone and malice to none’. It nonetheless aims to build a three-dimensional force capable of multi-platform warfare, requiring a massive expansion and modernisation of the army, navy and air force.

Scant details given in response to parliamentary questions suggest the army is planning to conduct its activities under three independent corps: the Central, Eastern and Western. Its primary mission is to provide necessary forces and capabilities in support of Bangladesh’s security and defence strategies.

Defence spending has risen by more than 123 per cent since the Awami League came to power, so it seems Prime Minister Hasina has bought the military’s loyalty at a high price. Transparency International Bangladesh observes that the decision-making process for major purchases is hard to follow, and that partisanship might have contributed to the reinstatement of senior military officers dismissed by the previous government. Defence purchases have landed three leaders in legal difficulties: the late General Ershad, convicted of corruption but cleared on appeal; Khaleda Zia, still under trial; and Prime Minister Hasina, cleared of all charges.

The armed forces have added new fighter jets, transport aircrafts, unmanned aerial vehicles, submarines and naval boats to their arsenal, and the enlargement of forces has brought a number of new garrisons and bases. Without any obvious external enemy, the army claims these are essential for UN peacekeeping operations, tackling internal threats and aiding civil administration when required, most notably during natural disasters and national polls.

The army has come under scrutiny over its tactics in the Chittagong Hills region, where it is tasked with maintaining security in the face of a two-decade-long insurgency. Human Rights Watch observed that ‘the region remains under military occupation and indigenous rights activists face threats of arrest, enforced disappearance, and violence’. Still, the situation has improved significantly since the signing of a peace deal in 1996 with the rebel group Parbatya Chattagram Jana Sanghati Samity.

The armed forces’ role in aiding civil administration is also controversial. Their role in elections held under caretaker governments between 1990 and 2001 earned them high praise, but the Awami League has now scrapped the caretaker system. At the time of amending the law known as the 15th Amendment, Prime Minister Hasina criticised the army for its role in prolonging the duration of the last caretaker government and jailing politicians including herself and her rival Khaleda Zia.

In recent years the government has followed countries like Turkey, Pakistan and Indonesia in engaging the armed forces in infrastructure projects. The Padma Bridge project has seen army engineers work on building riverbank protection. The Navy was similarly employed to develop an islet in the Bay of Bengal, known as Bhashan Char, to accommodate about 100,000 Rohingya refugees. These apparent nation-building projects expose them to business practices that may impair their judgements and hamper professional development, handing ‘sweeteners’ to the military in return for support.

Under the auspices of two welfare trusts headed by top commanders, the armed forces have expanded their business empire to a level easily surpassing the country’s top tycoons. Until 1998 the army had only one trust, but during her first term in office, Prime Minister Hasina allowed them to launch another conglomerate, the Army Welfare Trust.

This second entity has grown spectacularly, and new ventures owned by these trusts have more than doubled since Prime Minister Hasina returned to office in 2009. The scale and scope of these businesses are similar to those seen in countries like Myanmar and Pakistan. Though no one dares to speak about it openly, growing concerns about the army’s power should not be ignored.

Kamal Ahmed is an independent writer based in London. He was formerly the BBC’s South Asia analyst.

Myanmar Junta Mixes Violence With Extortion in Onslaught Against Protesters

Workers From More Than 100 Factories in Cambodia’s Capital Region Infected With...

Three Years of Mass Internment in Xinjiang Lead to Diplomatic...

Trust in WHO, Conflicts, questions, chaos and US, organization...

Wind of Truth: Dynastic Duo on the Defensive