The best of both worlds? Introducing the world’s first trimonoran Project Escalade

A radical new foiling hull design claims to combine the efficiency of a trimaran with the space of a monohull — Hugo Andreae takes a look at the world’s first trimonoran motoryachtSpeeds are higher and fuel efficiency is also much improvedAward-winning Turkish yacht designer Baran Akalin has combined forces with Dutch engineer G. Jelle Bilkert to create what they describe as the world’s first ‘trimonoran’.  As the name suggests it is based on a ground-breaking new hull design that claims to offer the efficiency and stability of a trimaran with the speed and volume of […] This article The best of both worlds? Introducing the world’s first trimonoran Project Escalade appeared first on Motor Boat & Yachting. 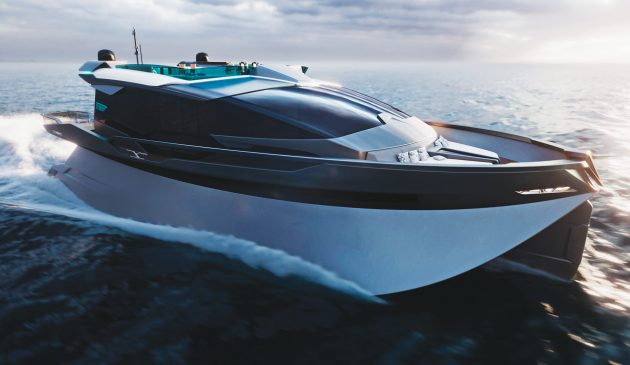 Award-winning Turkish yacht designer Baran Akalin has combined forces with Dutch engineer G. Jelle Bilkert to create what they describe as the world’s first ‘trimonoran’.  As the name suggests it is based on a ground-breaking new hull design that claims to offer the efficiency and stability of a trimaran with the speed and volume of a monohull.

Instead of three slender vertical hulls linked by spars or a beamy main deck, the two outer hulls fan out at an angle from the central hull like the segments of an orange. These are linked below the waterline with hydrofoils to create the necessary lift for planing without the associated drag and unforgiving ride of a big, beamy monohull.

The idea was originally drafted by Dutch naval architect G. Jelle Bilkert some time ago but has now been refined, developed and tank tested with the aid of Dutch government funding into a fully patented production concept by Dutch company AnwigemA BV.
Budding Turkish yacht designer Baran Akalin, who won a design award last year for his futuristic steampunk superyacht concept, saw its potential as the basis and has further developed the idea into a striking new luxury motoryacht concept named Escalade. 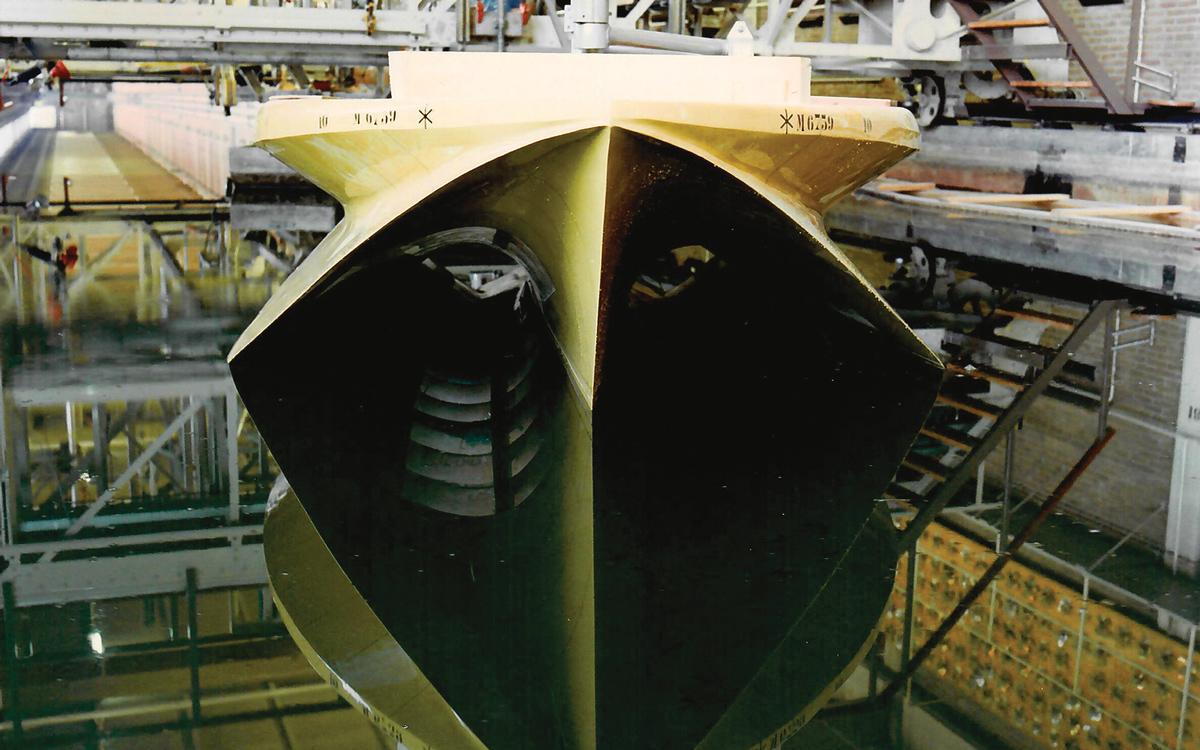 Tank testing of the scale model proved its potential

The benefits of this new low drag design are said to include speed gains of up to 30% over a conventional monohull, excellent stability both under way and at rest, large deck and hull spaces and superior fuel efficiency at cruising speeds leading to a greater range.

The principal is much the same as a trimaran in as far as the slender central hull generates less drag than a single beamy monohull design and slices cleanly through waves for a softer more efficient ride. The two outer hulls then provide the lateral stability as well as the extra volume and deck space needed to house the accommodation.

However, unlike a conventional multihull, it doesn’t come with the penalty of an excessively wide beam that makes it hard to fit into marina berths, nor the small planing surfaces that require huge amounts of power to generate enough lift to make it plane.

The key to this new trimonoran design is the addition of two foils linking the front and stern sections of the outer hulls. These not only provide lift but also reduce drag to enable the kind of planing speeds not normally possible with this size and style of yacht.
Another break from tradition is the adoption of a hydraulic link to transfer power between the engines and the propellers rather than a conventional shaft.

This allows the engines to be positioned amidships to keep the weight as low and central as possible while the propellers are mounted on the aft foil to keep them immersed at all times. The only physical link between the two are the high pressure hoses which feed hydraulic fluid from the main engines to the small hydraulic motors and shafts in the foil. Sealegs amphibious boats use a similar system to feed hydraulic power from the petrol generator mounted under the helm seat to the folding wheels on the transom.

Akalin’s current design for Escalade is based on an LOA of 82ft (25m) with a beam of 32ft 8in (10m). This is almost double the width of a comparable monohull such as the Princess 82 (18ft 10in) but still usefully slimmer than a similar length of powercat such as the Sunreef Power 80 (39ft 4in). 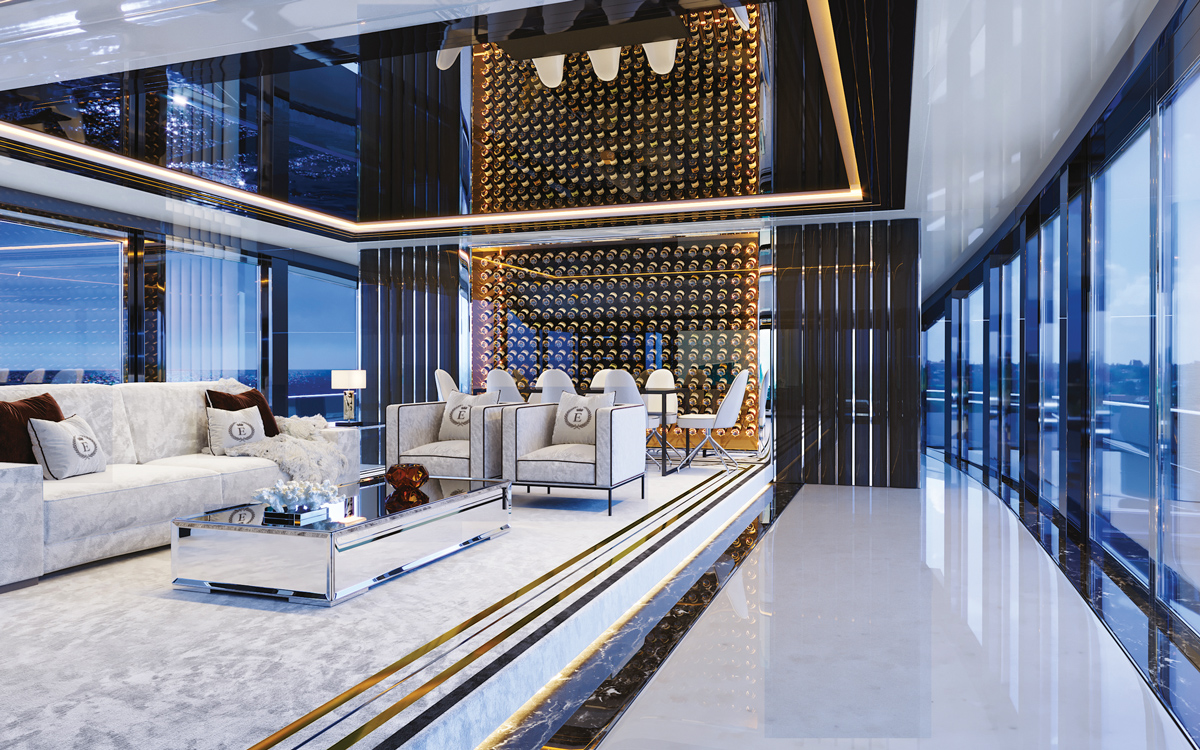 This length-to-beam ratio creates enough volume on the lower decks for four cabins and four bathrooms including a large master suite in the bow and an additional two-person crew cabin. However, the big wins are on the main and flybridge decks, both of which benefit from the extra floor space enabled by that 32ft beam.

The main deck incorporates a large open plan living area with a galley on the starboard side and a lounge area to port, in the middle of the yacht on a slightly raised plinth is a central seating and dining area with uninterrupted views out both sides. Doors out to the side decks as well as the cockpit encourage an easy flow of people and air through the yacht. The styling of the interior is the work of British designer Celia Sawyer.

Access to the flybridge is via a central staircase which passes under a glass-bottomed jacuzzi that allows light to filter down into the cockpit below as well as a unique view for its occupants of the wake trailing out behind. Multiple sunpads on the flybridge, in the aft cockpit and on the foredeck ensure it’s every bit as luxurious as a conventional monohull while its futuristic looks are a far cry from the rather dumpy looks of some multihull designs.

Although only a concept at this stage Akalin is confident Escalade could be turned into a viable production or semi-custom superyacht at a price that would allow it to compete with monohulls of similar volume.

First published in the October 2020 issue of Motor Boat & Yachting.

This article The best of both worlds? Introducing the world’s first trimonoran Project Escalade appeared first on Motor Boat & Yachting.

Photos: Anushka Sharmaâs latest pictures are too cute for words

Sanlorenzo Secures Two Sales of 62Steel; Hull One Set For...

Custom Line Launches 11 Superyachts in First Half of 2020