The Biden White House media doctrine: Less can be more

The president does little press. His Cabinet does a fair bit. Underlying it all is one overarching idea: Do things that feel natural. 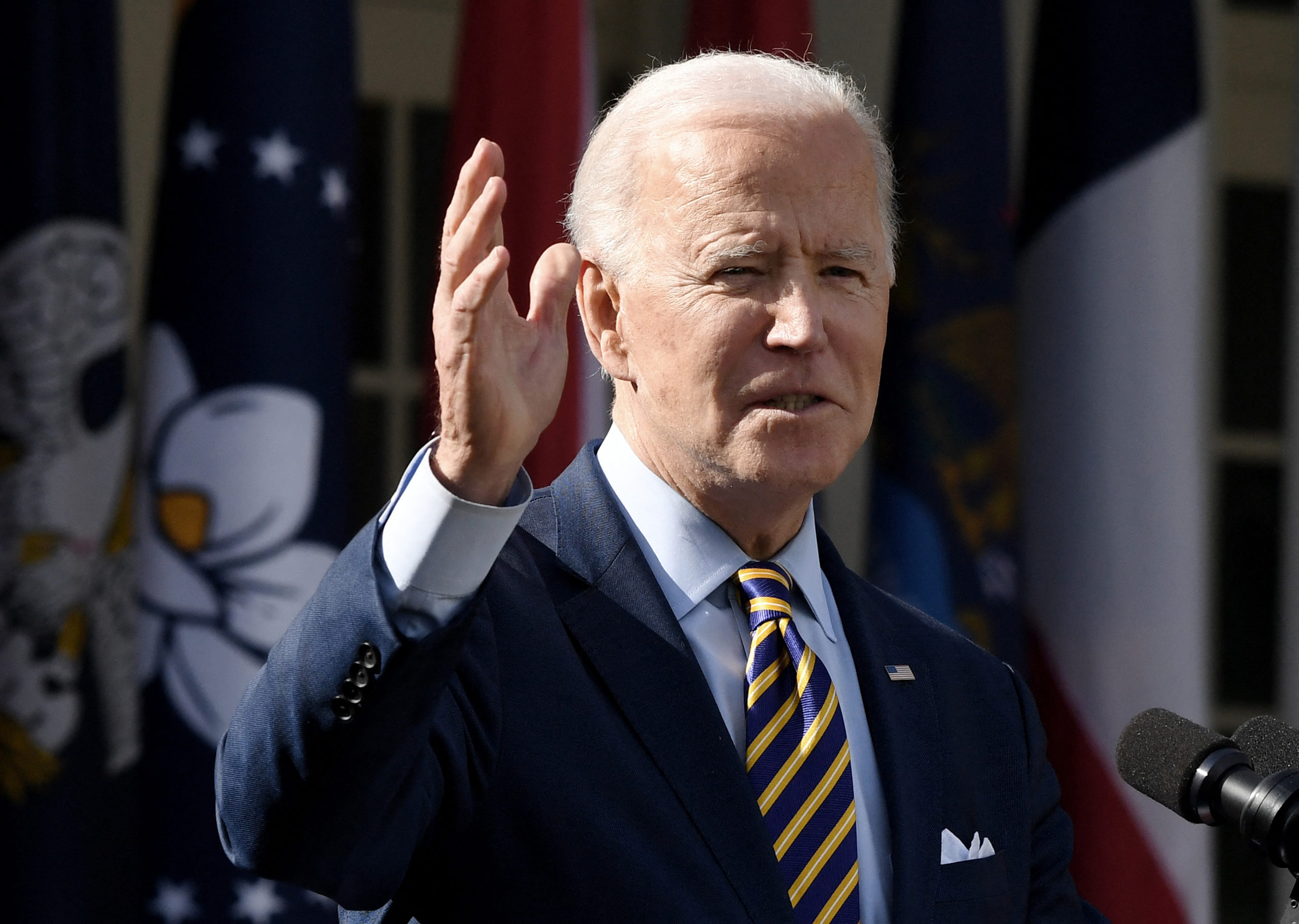 Three months in, Joe Biden’s White House has settled on a firm press strategy: First, do no self-harm.

The president is not doing cable news interviews. Tweets from his account are limited and, when they come, unimaginably conventional. The public comments are largely scripted. Biden has opted for fewer sit down interviews with mainstream outlets and reporters. He’s had just one major press conference — though another is coming — and prefers remarks straight to camera for the marquee moments. The White House is leaning more heavily on Cabinet officials to reach the audiences that didn’t tune into his latest Rose Garden event.

It’s the Hippocratic Oath for engagement with the fourth estate. And if it means criticism from the press and opponents about Biden’s availability, so be it.

“Our communications strategy is based on innovation in the digital space, flooding the zone in regional and coalitions press, and effectively using traditional national media. He’s the president, he’s got a lot on his plate. We have people fanning out every single day across different media to amplify his message,” deputy communications director Kate Berner told POLITICO. “We don’t let his schedule be a limiting factor for us. We use the Cabinet, they’re experts in their field. They also have audiences that they can uniquely speak to.”

During the campaign, the Biden team sold themselves as a return to calm. Their commitment to that pledge since taking office makes clear that itwasn’t just a show for voters but an actual strategy. It is a head-spinning departure from four years of President Donald Trump, who was his own surrogate and aspiring assignment editor, tweeting changes to policy and taking the typically adversarial relationship with the press to a full-on war.

But Biden’s approach is also markedly different from his former boss Barack Obama. In 2009, Obama became the first sitting president to appear on a late night talk show and at the end of his presidency, the administration began to explore new and innovative ways to reach beyond the White House press corps to get his message across.

Obama sat down for a “Between Two Ferns” interview with actor Zach Galifianakis in 2014 and did interviews with YouTube stars, including GloZell Green who, to that point, was best known for eating cereal out of the bathtub while sitting in it and choking on a ladle full of cinnamon.

Jennifer Palmieri, White House communications director at the time, said the shift in strategy came after a realization that any Sunday show or cable hit would get into a conversation about controversy and process rather than actual policy, at a time where Americans still thought Washington D.C. was about compromise. She argued that Biden doesn’t have those same constraints, in large part because he is pushing a more easy-to-sell agenda.

“They don’t have the burden that the Obama team had of trying to convince people that a policy is going to make their lives better,” Palmieri said. “Joe Biden is never going to fill the news vacuum that’s created by the departure of Donald Trump. But the administration writ large can do that.”

Inside the White House, there is a belief that Biden can be used best as a marquee player coming in at big moments when there is a need to reset the press narrative or push a major policy. It hasn’t always gone according to plan — on occasion, the White House has had to walk back or clarify comments Biden has made in the interviews he has given.

But as a strategy, it is a return to an era that predated the Obama White House, when the country heard from the president sparingly.

But it’s also a continuation of the campaign strategy — especially during the general election — premised on the idea thattoo much exposure didn’t necessarily work to his benefit. That mindset sparked criticism from the press as well as then-President Trump, who was doing daily press briefings on Covid-19 while his opponent was largely broadcasting from his home in Delaware. But Biden aides believed that simplicity and restraint was the best approach. He won the election.

“I don’t think that we felt like what [Trump’s team] did worked,” a senior communications aide told POLITICO. “What [Trump] was doing as a strategy was not successful.”

Robert Gibbs, Obama’s first press secretary, says that the current media environment forces a balance for any White House staff. The American people want to see the president working. But overexposure carries risk — and not just in the form of increasing the chances for a notable gaffe.

“I used to have these discussions with President Obama; we were just laying too much of the communications work on top of him,” Gibbs said. “In reality, once you elevate it to the role of the president commenting on it, you can’t really go backwards. Like it’s now fully owned by them.”

Gibbs said he was a bit envious of the Biden White House’s use of surrogates who could take some of the burden and blowback from explaining the White House’s policies.

Biden’s Cabinet has also taken on the task that Obama largely shouldered alone in going to unconventional media outlets to help reach alternate audiences. In March, HUD Secretary Marcia Fudge did an interview with The Shade Room, a pop culture site for a young, Black audience. She discussed the stimulus checks and specifically how unhoused individuals could make sure they got one. The administration sent Dr. Anthony Fauci, a key Covid-19 adviser to the president, to do a nearly 30 minute Instagram Live event with Eugenio Derbez, a Mexican actor and self-admitted “vaccine skeptic,” where he answered questions about the efficacy and safety of the Covid-19 vaccines. The video has 1.2 million views and counting.

“There’s a media ecosystem in Washington that has to be respected, but if you solely rely on that to get your message out, that is a mistake,” said Eric Schultz, former Obama principal deputy press secretary and current senior advisor to the president.

During the 2020 campaign, Biden’s team was cognizant of not putting him in situations that weren’t naturally comfortable. That didn’t mean forfeiting the digital landscape. It meant not overusing the principal and finding new and creative ways to meet folks on the Internet. Rob Flaherty, the White House digital director, says when they were building out the plan, the first thing on their mind was they had to go beyond the press and find ways to be “in every single place, because online, people’s media experiences are hyper-personalized and super-fractured.”

The White House’s social accounts are not stream-of-consciousness rants by the president. They’re not terribly adventurous, either. They have largely consisted of edited clips of Biden’s public remarks and weekly conversations where Biden answers questions from Americans on policy. The president’s team has taken a pretty surefire bet: most Americans aren’t hanging out on Twitter like the denizens of D.C. are.

“We get off of our platforms and go into the social feeds of people who will never watch CNN or read Vox but will and do trust various influencers and Instagram accounts and Facebook pages,” Flaherty said. “When you do those things, you are actually getting into these sort of nooks and crannies of the Internet that the White House would not normally reach.”

Democrats from the Obama years say they expect the Biden team will have to start using Biden himself in more unconventional ways once (and if) the country ever feels like it’s not in the throes of one life-altering crisis after another. But one thing that doesn’t seem likely to change: a return to any of the press drama from the Trump years, no matter how much right wing media hammers on “Basement Joe.”

“We’re not interested in making everyone crazy on Twitter,” Berner said. “We’re interested in driving the message that Americans around the country know what their government is doing for them and how their taxpayer dollars are being used and feel confident that there’s the administration.”

Britain looks from one coronavirus peak to the next

Belgium may partially relax lockdown, according to leak