The Big Bang Theory: The 10 Most Obscure References Made By The Gang

From comic books to movie stars, here are the 10 most obscure pop culture references made by the gang on The Big Bang Theory. 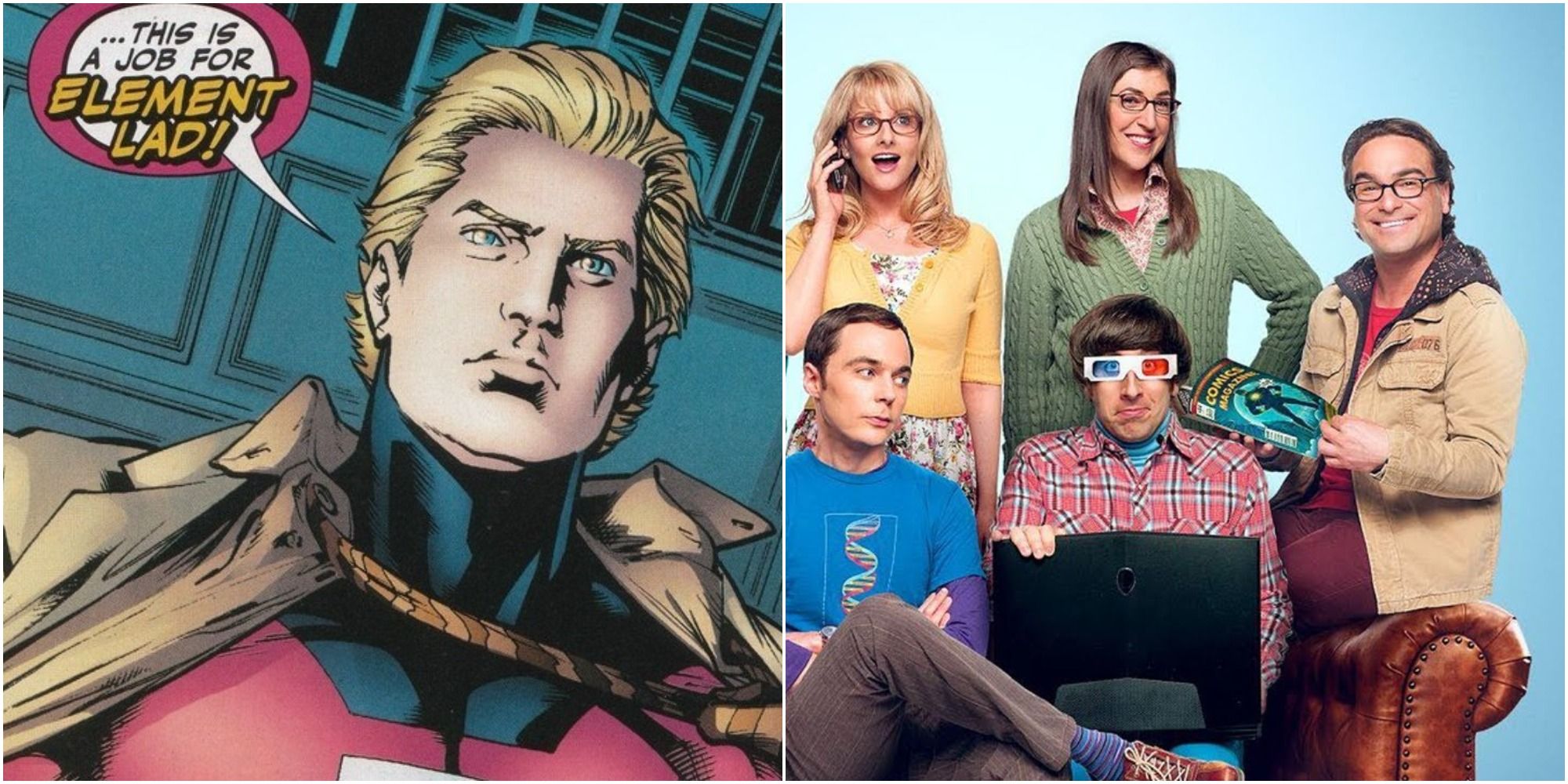 is a gold mine of pop culture references and Easter eggs which pay homage to some of the most recognized names in nerd-dom. Though there are many details about the show which are obviously references to , Harry Potter, etc, there are also several references which have been made throughout the twelve seasons of the show which are not part of popular culture and may actually need you to fire up Google.

RELATED: The Big Bang Theory: 5 Times We Hated Leonard (& 5 Times We Felt Sorry For Him)

But since the show has actually made its fans a lot smarter the fans probably do not mind a history and culture lesson now and then. Here are some of the most obscure references made in the show which you probably don’t know about.

The show is replete with references to million-dollar blockbuster franchises be it Star Trek, Harry Potter, Walking Dead. But lesser-known comics also found mentions, considering the squad’s loyalty towards cult comic reads. One such reference on the show adhered to Jan Arrah or Element Lad from the Legion of Super-Heroes from the DC Comic-verse. During the scavenger hunt in Season 7, one of the clues leads Sheldon and Penny to the geology lab and Sheldon explains that the cue cards left by Raj had a clue regarding Element Lad’s ability to transmute chemical elements.

Gen-Z pop culture enthusiasts or even some younger millennials may not remember the underrated cult sci-fi action film , but it did acquire quite a steady fan base. Based on the sci-fi animated series of the same name the film did not do well at the box office.

But the series has been a hit on the Halloween costume circuit and was clearly a favorite with Leonard because he dressed up as Inspector Gadget for the Halloween episode in Season 12 and even wore the helicopter hat which enabled the cyborg inspector to fly.

8 She Blinded me With Science

The makers of the show had initially decided that the famous 1982 Thomas Dolby song She Blinded Me with Science would be the theme song for the show. But of course, as everyone knows eventually the catchy number by the band Barenaked Ladies was picked to be the tune for the show. While Dolby’s song was dropped as the choice for the theme, the showrunners used the track in the episode ‘The Vegas Renormalization’ and ‘The Creepy Candy Coating Corollary where Howard’s phone has the sing as its ringtone.

While flashy, Hollywood comic-cons are great, real loyalists always seek out comic conventions that are not fueled entirely by star power and glamor but are in fact, nerd-friendly. So the costumes can be economical, or low-budget but the appreciation is rich and wholesome.

In Season 6, the boys head out to the Bakersfield Comic-Con and Leonard explains to Penny that this particular convention is representative of a different kind of culture, before every comic con turned totally Hollywood and commercial. The Bakersfield Comic-Con, is indeed a real comic con, and although not as famous as San Diego or New York, it remains a big favorite.

Before Barney and Friends, there was ALF which was a wholesome family sitcom about a furry alien creature from the planet Melmac who crash lands into a suburban family’s garage from space and continues living with them. In TBBT Season 3, the gang finds a box of lost pop culture merchandise and Howard discovers an ALF doll amid all the merch. This would be relevant because Howard would be around 10 or 11 when ALF aired in the mid-eighties. Howard reveals to his friends, that after his dad left he would pretend that his father is visiting Melmac and that ALF was going to bring him back.

There has been a lot of debate about the way Raj has been represented throughout the show, vis-a-vis the jokes on the Indian culture and heritage. However, the show did get some of the aspects right about Raj’s origins and Indian mythology, specifically the Hindu religion.

RELATED: Are The Big Bang Cast Really Smart? Ranking The Actors On Their University Degrees

When the boys are playing a make-believe war at the Cheesecake Factory with ketchup bottles and salt shakers, Raj pitches the Hindu lords Shiva and Ganesh against the Union Army, orcs, and the Hulk. When Howard questions this move, Raj explains that Shiva is referred to as ‘The Destroyer’, and the elephant god Ganesha is the remover of obstacles so that would make sense.

Amy’s apartment number is 314. Funnily enough, it’s the same number as the value of pi, 3.14 to be specific. This is also Albert Einstein’s birthday as he was born on March 14, or 3/14, and considering Sheldon and Amy’s love for the scientist it would make a lot of sense. The fandom also has a really adorable theory about the number on the guys’ apartment which is 4A and is spelled as ‘foray,’ which means venturing into unfamiliar territory or the start of something new. Both Leonard and Sheldon did go through a significant transformation in that apartment and had to step out of their comfort zones to embrace new people and possibilities, to get to their happy ending, and this could just be a nod to this aspect.

Any hardcore comic book loyalist will scoff at someone who isn’t familiar with the Hellblazer comics created by Alan Moore, which was also the source material for the Keanu Reeves movie Constantine. When Penny asks for a comic book recommendation for her 13-year-old nephew, Stuart picks out a Hellblazer comic.

RELATED: The Big Bang Theory: Amy’s Slow Transformation Over The Years (In Pictures)

He introduces the main man John Constantine as "a morally ambiguous confidence man who smokes, has lung cancer and is tormented by the spirits of the undead". It would make sense for a comic book store owner to pick out Hellblazer for a novice because most die-hard comic lovers will put Hellblazer in the comic book lover starter kit.

Sheldon and Leonard’s names were actually tributes to some very celebrated names in science and culture. Leonard’s last name Hofstadter was inspired by Nobel Prize-winning physicist Robert Hofstadter who was known for his pathbreaking work in the world of electrons and Sheldon’s last name Cooper was an homage to Leon Cooper a Nobel Prize Laureate, who discovered the Cooper pair. Meanwhile, the first names of the two BFFs were an homage to the iconic were created in honor of American film and television writer and producer Sheldon Leonard because the writers were fans of his work.

When Sheldon visits Raj’s apartment and sees him watching a Hindi film he immediately recognizes the two famous actors, namely Aishwarya Rai and Madhuri Dixit. While Rai is considered to be one of the most beautiful women in the world, Sheldon seems to like Madhuri Dixit better, and calls Rai a ‘poor man’s Madhuri Dixit.’ This makes Raj scoff because he likes Rai better, although in Bollywood Dixit is held in much higher regard as an actor. Madhuri and Aishwarya had famously starred together in the 20020 magnum opus Devdas, which is one of the most iconic tales of unrequited love, and TBBT has, of course, explored the friend-zoning aspect quite closely which is the modern-day spin on the concept of unrequited love.

NEXT: The Big Bang Theory: The Worst Episode Of Every Season, According To IMDb

Buffy The Vampire Slayer: 10 Things About Giles That Would...

It started with a routine police call reporting someone using a counterfeit bill...

The utility's management will be questioned about storm preparedness, communication...

From testing, to lifting the lockdown, to the makeup of his scientific advisory...

The 29-year-old guard said his concern for the well-being of his family, in particular...

Every Fashion Item I've Bought In the Last 30 Days And...

But if he wants to avoid being the target of their protests both before and—if he’s...

The U.S. Coast Guard said a body that matches the description of a missing woman...

When Franklin and Val need help after making it back to Earth, Val sends out a distress...

Coming in at only 10g net carbs per serving and with ingredients that cost less...

The mask debate rages on

France will force most workers to wear masks, but the U.K. doesn't think such a...