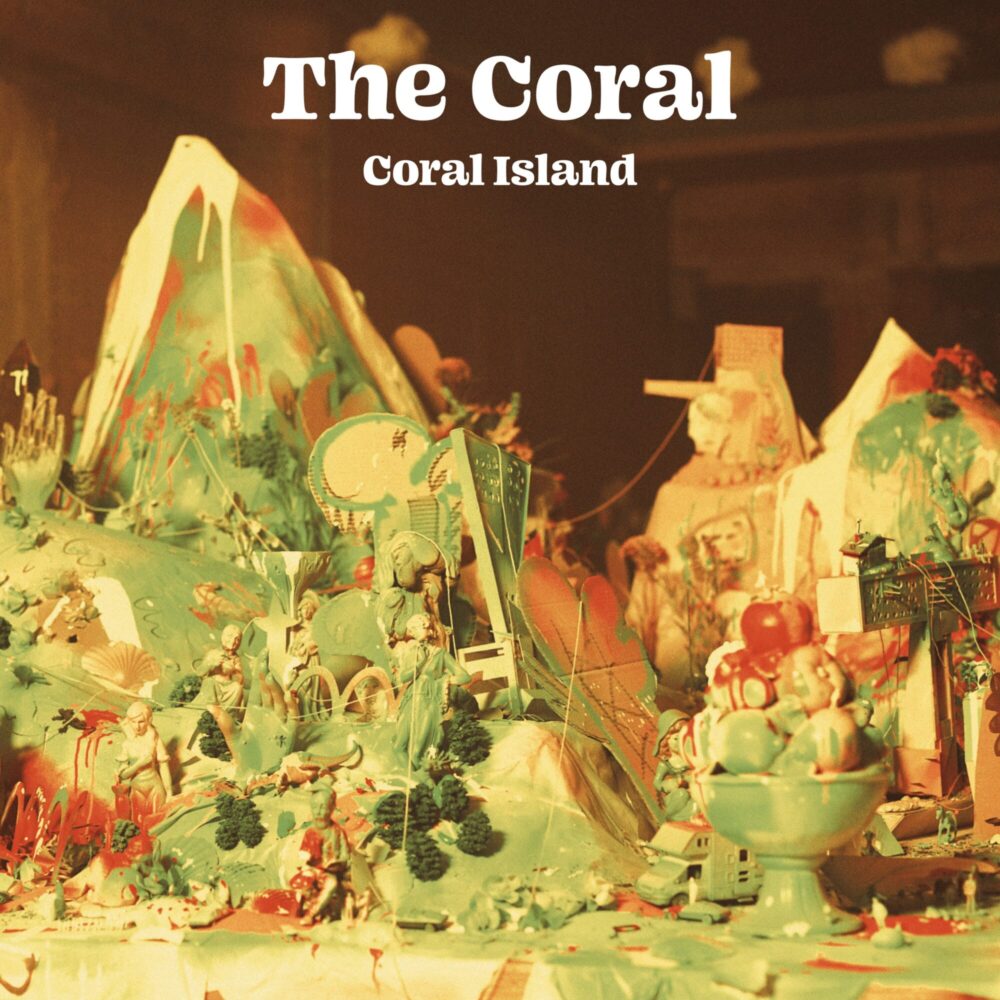 The Coral return with a double concept album that pulls you into their rose-tinted world of wonder. This could be their best album to date.

“On Coral Island you can fall in love…” and fall we did, hard, nearly two decades ago for this wily band of psych kids who shot from the traps of their eponymous debut album, full of twists and turns, crazed riffs that spat out and wrapped themselves around your ears. After twenty years of providing the perfect hazy summer soundtracks, the band are back with their most ambitious project to date: Coral Island. News of their first double album set anticipations high. Could they pull off such a task without falling on filler and chaff? The answer is a resounding yes. The album is a triumph, from start to finish.

Not only is it their first double album, but also their first (loosely based) concept album. The end of the pier, arcades and showstoppers, helter-skelters towering over pebble-strewn beaches. Two sides of the story: the glittering heights of the summer heydays followed by the downfall and the ghostly characters that still populate the deserted stalls and boardwalks. The album, which came to fruition thanks to keyboardist Nick Power’s burgeoning fiction writings, sets the imagery via the nostalgia of childhood viewed through the eyes of adults reminiscing on heady days of waltzers and candyfloss. The band drip the songs in their usual dreamy psych, James Skelly’s voice yearning throughout as he croons through wistful melodies that seep into your psyche.

The first part of the album brims with hope and joy. Single Lover Undiscovered sets the tone wonderfully. A new day, fresh opportunities. It skips and slides along with grace, head high. Mist On The River takes the band back to the best of their sound of Magic And Medicine, honed over the years to perfection, the opening organ notes drawing in on that arcade wonder of their new world. “These days seem like heaven when it all falls away.” It sits neatly between the feelings of nostalgia and the focus on a newfound love. “I look at you and in my mind I’ll be saved.”

Mid-side highlight, Vacancy, feels timeless, again a Wurlitzer winding beneath the woozy melody brings the memories of dancehalls at the end of piers, bustling and teeming with giddy joy. It’s a sensation that continues on the wonderful My Best Friend. The side’s closing song, Autumn Has Come, feeds perfectly into the changing of mood. The rides are winding down, cold waves lap the shoreline, “golden days are gone.” The melody begins to haunt, a precursor to the second half of the album, with a perfect line that comes to all our minds each year as we reminisce on the end of another summer, thinking back to the days of our youth when they seemed endless. “The seasons seem to change much too soon.”

What ties the songs together so well are the spoken-word interludes, recorded by the Skellys’ grandfather and filtered through an echo effect to give it an air of mystery. It’s in these parts that the band have managed to weave their songs to the concept, placing the album alongside the second side of Ogden’s Nut Gone Flake, or the classic SF Sorrow. The band are pulling on that same idea of an album as work of literature, songs as stories, and it reinforces the need to return to a time when albums were cohesive bodies of work rather than a collection of singles, pick ‘n’ mix sweets to be streamed and nibbled on. Coral Island is a stick of Blackpool rock to be slowly and constantly devoured, savoured as the message runs throughout. The accompanying book by Power, and illustrated by Ian Skelly, will allow fans to delve further into their world.

Skelly Sr closes the side with End Of The Pier, a send-off to the penny arcades and promenades before he again opens the second set with The Ghost Of Coral Island. The remnants of the summer lay scattered on the floor as the band begin to look back through the cracks of the tarpaulin that covers their carousel.

Golden Age feels like both and welcome and goodbye to the crowds. They have one last roll of the die, one last penny for the slots. From there, things start to take a spookier turn with Faceless Angel, an almost eerie take on Johnny Remember Me as the desolation of winter falls on the once-bustling town. “Faceless Angels. Where do they go?” The interludes begin to bring in the characters of the fairground, lost and without purpose, a carnival of souls. Through the yearning Strange Illusions, we see ships leaving, but the side is not all dark. There’s a merriness in the memories, looking back and creating a warmth within, and it comes through on the Beatles-esque Summertime over a simple and catchy melody. It’s there that The Coral have a true gift, one that they have displayed throughout their career. A touch of light that sparks in the dark.

Standout track on the second disc, Old Photographs, is an evocative and stripped-down acoustic piece that brings the sense of recollection, a hue of sentimentality at the stories they tell. By the time they reach the final song, Calico Girl, the band have all but disappeared altogether and we are left with James Skelly in the guise of a busker, still standing, alone, waiting for the tourists to return. The piano joins mid-song to add a dose of hope that the days of glory will return, pulling them from the purgatory of winter back to the heavenly summer days.

They closed out their last album, Move Through The Dawn, with the wonderful After The Fair, telling us to hold on to what we have, chase it when it runs away, and look towards tomorrow before it’s gone. Perhaps there the seeds were sown for this new record. On Coral Island, the band have created what could well be their opus. It sprawls across 24 tracks, of which the 15 songs are amongst some of their best work. It’s a whole world within a world, an escape from reality that resonates deeply, fantastical yet altogether real.

Coral Island is available from Sister Ray and from The Coral’s website.

nudista's 'confess' Is A Real Slow-Burner

Wrabel and Kesha Get Nostalgic With Childhood Footage in...