The Crystalites: The Undertaker – album review

The Crystalites: The Undertaker (Doctor Bird) 2CD | DL Released 12 March 2021 Reissue of the 1970 instrumental album by Derrick Harriott’s studio band (AKA The Dynamites) with a bonus 14 sides also recorded by the band and a full disc of Derrick’s vocal productions from 1969-70. Ian Canty is the mysterious stranger that rides […] The post The Crystalites: The Undertaker – album review appeared first on Louder Than War. 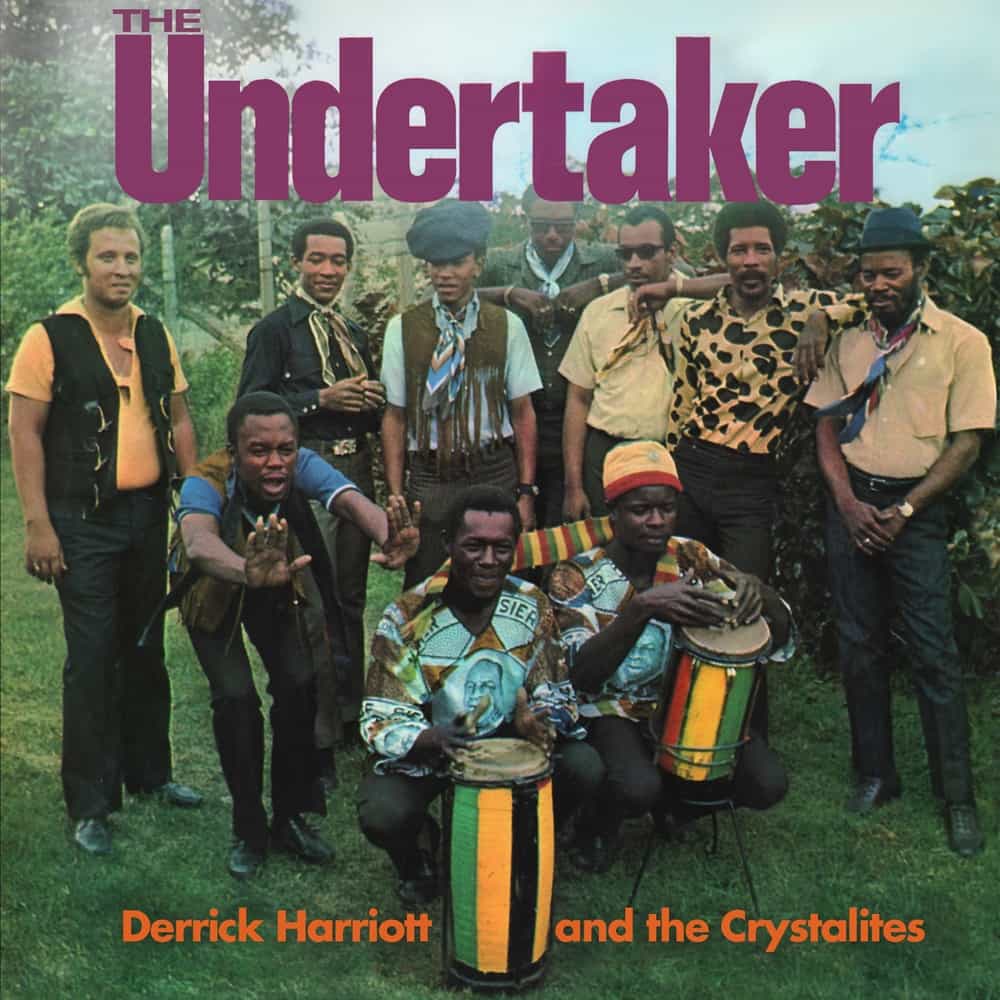 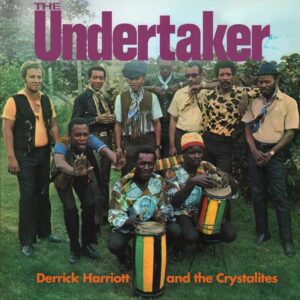 Reissue of the 1970 instrumental album by Derrick Harriott’s studio band (AKA The Dynamites) with a bonus 14 sides also recorded by the band and a full disc of Derrick’s vocal productions from 1969-70. Ian Canty is the mysterious stranger that rides into Dodge City…

During the 1960s, every reggae producer in Kingston prided themselves on having a crack studio outfit on hand to provide just the rhythm track for their roster of singers to thrive on. Singer/producer Derrick Harriott was no different than the rest. Having started his Crystal label in the middle of the decade, it seemed natural that his resident band would be called The Crystalites. Their name first featured on Derrick’s Solomon single back in 1967 and they later played on the fine Psychedelic Train album (credited to Derrick Harriott & The Crystalites, reviewed here) in 1970, issued only months prior to The Undertaker’s release.

There was a finite number of players though on the Kingston session scene and many of the steady hands employed swelled their pay packets by turning up in several of these backing bands. The Crystalites proved the case more than most, being actually The Dynamites under an alias. They recorded with Clancy Eccles under that moniker and included in their number big names on the session circuit like pianist Gladdy Anderson, bassman Boris Gardiner and organist Winston Wright. They seldom got a go in the limelight though, so it is great to see them pictured on the sleeve photo of their second album with Harriott, The Undertaker.

The “spaghetti western” movies, which were produced from the early 1960s onwards in Italy and Spain, were long-standing favourites in Jamaica and their influence provides the theme of The Undertaker. Films like a Fistful Of Dollars and Death Rides A Horse were tremendously popular throughout the isle and a measure of this can be seen in Perry Henzell’s The Harder They Come, where Jimmy Cliff’s character Ivan watches Django, a 1966 effort in the genre directed by Sergio Corbucci. In addition to the action, the memorable dialogue of these flicks was naturally picked up in music by the DJs as they rode rhythms at the dances. Often lifted directly from Clint Eastwood et al, these tough-talking quotes crucially also had just the kind of “bad boy” appeal that was ready-made for the new skinhead reggae fans in the UK.

The first disc of this set is entirely turned over to the Crystalites, presenting the original album along with 14 bonus cuts. You will need to be a bit of a fan of organ-led reggae instrumentals to get the best out of it, as there are 26 examples of the form present. I love them myself, but there is the potential that the less committed may tire over the full course. Many of the tracks are prefaced by western-style intros, which were mainly done by Owen Silvera aka Ramon The Mexican and are on the whole good fun. The SW theme abides for most of the LP’s 12 offerings, but there are diversions to The Beatles (a skank around Lady Madonna) and Dr Who, which I was a bit disappointed on first hearing to find out wasn’t a reggae version of the TV series theme tune. It is however a fast-paced tune with a suitably histrionic preamble.

The Undertaker starts with the cool lilt of its title track, with the spoken introduction being dropped in at various points during its duration. The Overtaker follows the same pattern, beginning with a slightly unconvincing “What you looking for senior?” voiceover, but otherwise has some of that highly evocative “fairground” organ sound and good guitar work. Biafra and Reggae Showdown depart the concept somewhat, but the former is a truly excellent skin dancer and the latter a decent DJ toast. A very brief and hoarse intro to True Grit leads to an appealing guitar-led tune and Bombshell is a neat sax outing. All things considered, The Undertaker manages to sustain interest and appeal because of the cracking dance tracks that underpin the concept.

There are plenty of good grooves amongst the bonuses too. The loping, brass skank of Short Story is a winner. It seems odd Stranger In Town wasn’t part of the album proper, as its introduction is pitched in the same spaghetti western field and is embellished by a nimble bassline and attractive keyboard frills. The Undertaker’s Burial, a sequel to the title track, is as one would suspect thematically similar, with a nice organ glide and a saxophone that floats along the racing tempo. Heavy Load (using the rhythm of Rudy Mills’ A Heavy Load) is another good one, a real boss reggae masterclass and the following track, a slower piano skank called Tonight, chills things down nicely.

The second disc of this set changes tack and focusses instead on Derek Harriott’s vocal productions from the original reggae era. The Crystalites themselves are still present in the “engine room”, but also crop up with sax instrumental Isis Part 2 and set closer/wah-wah showcase Message From A Blackman Version II. But for the most part, singers take the main billing here. One of the great things about these comps is that they often dwell on more obscure artists, or give the listener access to further material from a singer or group chiefly known for one big score.

Rudolph Mills, better known as Rudy, comes into the latter category. He first made a mark in the rocksteady era, but his boss reggae classic John Jones (the backing track of which is one of the featured rhythms on The Undertaker) would become the tune he was most identified with. Here he provides us with eight efforts, each with something to recommend about it.

He sets things in motion on a soulful note with the very catchy Lemi Li and does a good job on well-worn oldie Tears On My Pillow. The warm Hang Your Heart To Dry benefits from some great vocal and instrumental support and the steady rhythm of Wholesale Love helps draw a fine performance from Rudy. I really enjoyed listening to his work on this set, perhaps one day he will have his own dedicated release.

Among the other selections Derek Harriott crops up himself on the near-pure r&b of Candy and roots reggae star-to-be Junior Murvin gives us fair warning of his talent on the cool item The Hustler, which unusually employs the Scottish phrase “many a mickle makes a muckle” as a tagline. Another artist here that would soon be in the limelight was Nicky Thomas, who’s part of The Chuckles group that is represented by Come Home and the sparky racetrack number Run Nigel Run.

Another big name appearing is The Ethiopians, who acquit themselves with their usual poise on the neat Good Ambition and No Baptism. Pat Satchmo’s Louie Armstrong impersonation on A Handful Of Friends is hilarious and the paring of Keith Rowe and Tex Dixon yields plenty of good stuff on their four offerings, with perhaps the tough social comment of Tighten Up Your Gird being the standout. There’s barely a duff track on this second disc and many great examples of boss/skinhead reggae.

Though the first disc of The Undertaker is mainly for connoisseurs of the organ instrumental, the second presents a convincing argument for Derrick Harriott as one of the key Jamaican producers around 1969/70. His works aren’t flashy, but they’re damned effective. In The Crystalites, he had the ideal backing group for the time, with their various talents knitted into a satisfying whole by his production skills. All of which results in a collection that is great fun and fine listening, even all these years on.

The post The Crystalites: The Undertaker – album review appeared first on Louder Than War.