New measurements of a weird but simple atom, one without a nucleus, suggest it may have unexpected properties. Scientists find this troubling. 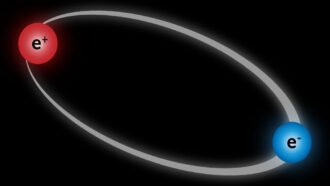 This exotic “atom” has no nucleus. As such, it should be simple to understand. Yet a new measurement of it does not match what scientists had predicted. Physicists are now at a loss to explain why that might be.

The riddle was reported August 14 in Physical Review Letters.

A flaw in earlier calculations seems unlikely, the researchers say. So does any mistake in how the new measurement was made. And unknown phenomena — such as undiscovered particles — also don’t seem likely, adds Jesús Pérez Ríos. He’s a theoretical physicist who did not take part in the new study. He works at the Fritz Haber Institute. It’s part the Max Planck Society in Berlin, Germany. So what is the explanation? “Right now,” he says, “the best I can tell you is, we don’t know.”

Positronium’s electron circles in an orbit with a positron. The two are attracted by their opposite charges. It’s how electrons are attracted to the positively charged nucleus in most atoms. Except positronium doesn’t have a nucleus.

For more than 60 years, scientists have been able to create positronium. But the nucleus-free atoms don’t last long. Their partnerships are unstable. They enjoy just a brief dance of death lasting perhaps hundreds of nanoseconds. The reason: Matter and antimatter annihilate each other on meeting. And, eventually, that’s what happens to positronium.

So simple, yet so challenging

This atom’s structure is appealingly simple. That should make it easy to precisely test quantum electrodynamics. That’s a long name for the theory that explains how electrically charged particles interact.

Explainer: Quantum is the world of the super small

To form positronium, scientists first sent a beam of positrons colliding into a target. There, this beam met up with electrons. The researchers altered some of the resulting positronium atoms with a laser: It put them in a particular energy level. Then the team bathed the atoms with microwave radiation. This caused some of them to jump to a new energy level.

The researchers pinpointed the frequency of microwave radiation needed to make the atoms take this leap. That told them the size of the gap between the energy levels.

Their calculations predicted the microwave frequency would be 18,498 megahertz. In fact, they needed a frequency some 0.02 percent higher. That may not sound like much. But the estimated error for such tests was only about 0.003 percent. So the difference was far bigger than expected.

What does this mean?

The team searched for anything that might explain the difference. And they came up with — nothing. More tests are needed to try and understand the mismatch, says Akira Ishida. He’s a particle physicist who was not involved with the study. Ishida works at the University of Tokyo, in Japan. If new measurements don’t shrink the difference, he says, “the situation becomes much more exciting.”

The initial prediction for the energy-level spacing also seems to have been good. In this field, these predictions involve making calculations to a certain level of precision. This requires leaving out some things that are less significant and harder to calculate. The left-out things are expected to be too small to cause any difference. Still, “it’s conceivable that you could be surprised,” says Greg Adkins. He’s a theoretical physicist at Franklin & Marshall College in Lancaster, Pa.

If the new tests and the predictions both seem accurate, then the mismatch might point to some new subatomic particle.

That, however, seems unlikely. A new particle’s effects probably would have shown up in earlier tests. For example, says Pérez Ríos, positronium’s energy levels could be affected by a hypothetical axion-like particle. That’s a lightweight particle that has the potential to explain dark matter. (Dark matter is an invisible type of matter thought to permeate the universe.) But if such a particle was behind the mismatch, researchers should also have seen its effects when measuring the magnetic properties of the electron.

That leaves scientists still searching for an answer, says David Cassidy. A coauthor of the study, he also works at University College London. “It’s going to be something surprising,” he concludes. “I just don’t know what.­”

Milky Way’s tidal forces are shredding a nearby star cluster

Scientists May Have Just Found The Youngest Neutron Star...

Busy beavers may be speeding thaw of Arctic permafrost