The Airbus A320 and Boeing 737 families have dominated the single-aisle, short-haul market for decades. With these aircraft… 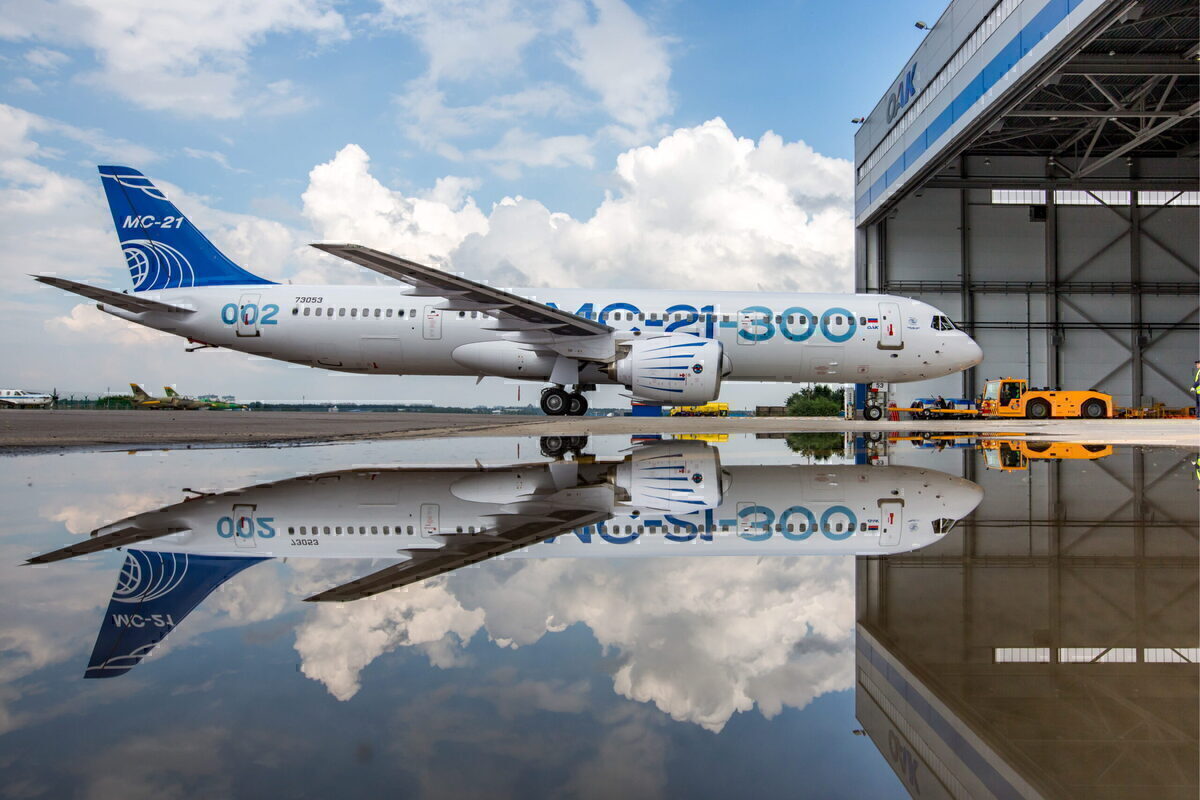 The Airbus A320 and Boeing 737 families have dominated the single-aisle, short-haul market for decades. With these aircraft being such successful and widespread products, it can be difficult for competitors to establish themselves in this domain. However, Russian manufacturer Irkut is set to throw its hat into the ring with its upcoming MC21. Let’s take a closer look at everything you need to know about its standard variant, the MC-21-300.

In the pipeline for 15 years

Work on the MC-21 project has been ongoing since 2006. At this stage, Russia’s United Aircraft Corporation (UAC) set a goal of producing an aircraft to replace the three-engine Tupolev Tu-154. Irkut is a branch of the UAC, and the parent company of fellow Russian aircraft manufacturer Yakovlev.

In addition to replacing the older Tu-154, the aircraft was also seen as an opportunity to outshine the existing Airbus A320 and Boeing 737 families. UAC targeted better performance than these aircraft in areas such as efficiency, fuel consumption, operating costs, weight, and list price. UAC launched the MC-21 program in 2007, aiming for a 2016 introduction.

Irkut’s website comprehensively lists the specifications of both variants of the MC-21 family. These are the standard MC-21-300, and the short-fuselage MC-21-200. Our analysis will focus on the former of these versions. The MC-21-300 boasts the following specs:

The UAC originally planned for the MC-21 to compete with aircraft from the Airbus A320ceo and Boeing 737NG families. However, between then and now, both of these aircraft have seen next-generation versions launched in the form of the A320neo and 737 MAX. As such, the MC-21 will face stiffer competition in the short-haul market than initially planned.

As such, with broadly similar specifications, airlines will likely decide for or against the MC-21 based on other factors. For example, operators may favor the established reputation of the A320 and 737 families over the relatively unproven MC-21. Indeed, these aircraft are among the most-produced commercial aircraft in aviation history.

On the other hand, the Russian aircraft’s lower cost may persuade some airlines to make the switch. According to Russian Aviation Insider, Irkut listed its price as $96.1 million in 2018. Meanwhile, Simple Flying reported in January that the A320neo’s list price is $110.6 million. As for the 737 MAX 8, this is listed at $121.6 million. Of course, it is important to consider that airlines tend to receive significant discounts against these figures.

What engines will the MC-21 have?

As far as the MC-21’s engines are concerned, an interesting choice is available. The plane’s two turbofans will be one of two models, with the standard option being the US-designed Pratt & Whitney PW1400G. However, last November, a prototype with Russian-built engines also emerged. These turbofans are known as the Aviadvigatel PD-14.

The following month, the Aviadvigatel-powered prototype took to the skies for the first time. The aircraft successfully completed an 85-minute test flight in Siberia, which Russia’s Deputy Prime Minister called a landmark for the country’s civil aviation industry.

The breakthrough with the aircraft’s Russian-designed engines represented a significant milestone in the MC-21-300’s development. However, its testing program has also had a few hiccups along the way. For example, the onset of the coronavirus pandemic last year forced the company to briefly cease these tests. They resumed last April.

More recently, January 2021 saw one of the type’s test aircraft experience a runway excursion after landing at Moscow Zhukovsky International Airport (ZIA) in wintery conditions. Thankfully, its crew were not hurt, although the aircraft itself did get stuck in the adjacent snow.

Moving forward, Irkut hopes that the aircraft will be able to enter commercial service later this year. This represents a five-year delay compared to its planned 2016 introduction, which was the company’s target upon launching the program in 2007.

As far as the aircraft’s orders are concerned, the MC-21 appears to have built up a decent customer base to date. According to FlightGlobal, 175 firm orders have been placed for the aircraft. The majority of these are from Russian customers, although it has also received foreign orders from Azerbaijan Airlines.

Cairo Airlines was another non-Russian operator to have ordered the type, although this carrier has since folded. Interestingly, its orders are far lower than the Chinese COMAC C919, which has more than 800 orders to date. This aircraft is also being touted as a potential competitor for the Airbus A320neo and Boeing 737 MAX families.

As such, Irkut may find that its MC-21-300 has another plane to compete with in order to establish itself in the single-aisle, short-haul market. Nonetheless, it will certainly be interesting to see what the next 12 months hold for the aircraft.

What do you make of the Irkut MC-21-300? Will it prove a strong competitor for the likes of the Airbus A320 and Boeing 737 families? Let us know your thoughts and predictions in the comments.