The Most Famous and Iconic Movie Watches of All Time

Watches featured in films aren’t just handsome accessories, they tie into the storyline and add depth to characters. Back in the old days, watches featured in the movies often became incidental icons – the right watch being strapped on the right (handsome) wrist. Later on, the watches in films became well-placed brand sponsorships orchestrated by […] The post The Most Famous and Iconic Movie Watches of All Time appeared first on Bob's Watches. 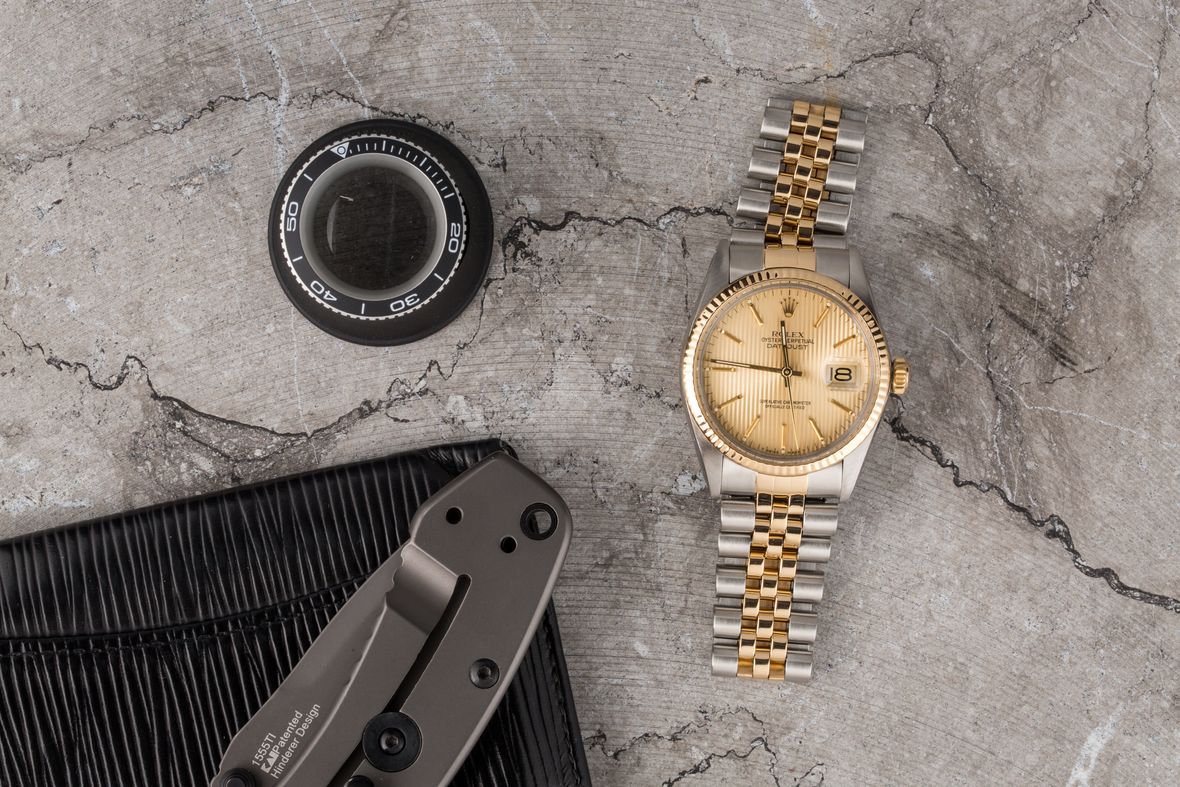 Watches featured in films aren’t just handsome accessories, they tie into the storyline and add depth to characters. Back in the old days, watches featured in the movies often became incidental icons – the right watch being strapped on the right (handsome) wrist. Later on, the watches in films became well-placed brand sponsorships orchestrated by the studio. But no matter how they got there, some of the watches that have graced the wrists of Hollywood’s biggest actors have become stars of their own.

9 Iconic Timepieces From The World of Cinema

What we particularly love about luxury watches on the silver screen is the awe they inspire. Avid collectors love rewinding to the past and seeing these beautiful (now vintage) – pieces. Often, these watches even inspired an entire generation to get into collecting. So here, we rounded up some of the most iconic watches to ever be featured on film. Excited to go down memory lane? You’re going to love these 9 iconic timepieces from the world of cinema.

American Psycho’s protagonist Patrick Bateman has become an unlikely pop-culture icon. Despite being a psychotic killer, Christian Bale’s character is stylish and well-groomed. So, it’s not a surprise that moviegoers paid special attention to his watch, a two-tone 36mm Rolex Datejust 16013 with a Jubilee bracelet in the film. The story unfolds in 1980s New York when two-tone watches, forged out of stainless steel and gold, were incredibly popular. Since its release in 2000, American Psycho has become a total cult-classic. So much so, the Rolex worn by Bateman is to this day known as the ‘American Psycho Rolex’ among many collectors.

Click here to learn more about the history of the Rolex Datejust.

James Bond has been wearing sophisticated, luxury timepieces since the beginning. So it’s no surprise that in the 2012 film Skyfall, James Bond is pictured wearing an Omega Seamaster Planet Ocean 600M. While James Bond famously wore Rolex in the early days, the franchise has been sporting the Seamaster in the world-famous spy films since 1995’s GoldenEye. Omega even came out with a commemorative watch for this James Bond feature – the Skyfall Omega 232.30.42.21.01.004. Special features include a 007 logo at the 7-hour marker as well as the wording “Skyfall 007” engraved on the rotor, which is visible via the exhibition case back. 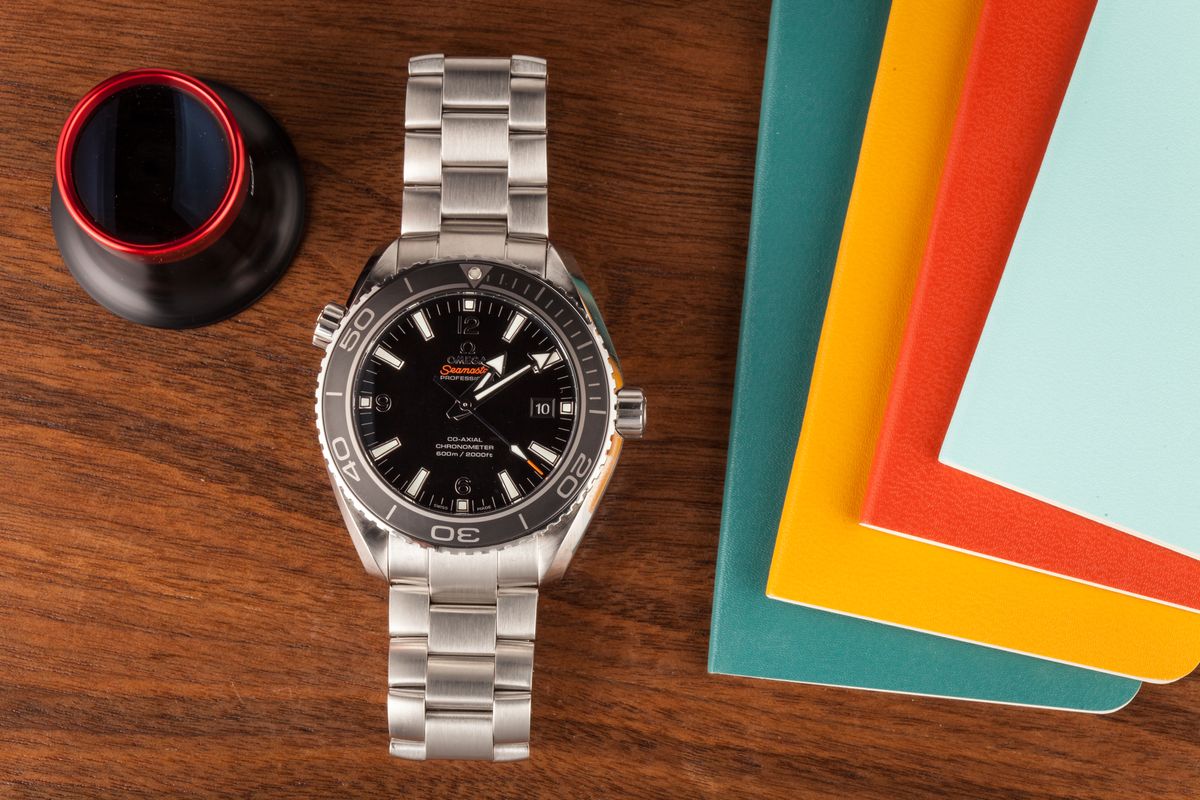 Click here to read the complete history of he Omega Seamaster Planet Ocean.

Dr. No (Featuring The Rolex Submariner 6538)

Often referred to as the holy grail of movie watches, the Rolex Submariner ref. 6538 is incredibly popular because it was worn by two icons: James Bond and Sean Connery. The movie debuted in 1962, making it one of the earliest watches to be featured on the silver screen that gained cult status. Legend has it, Rolex was never even involved in the feature, and that one of the movie’s producers gave Connery the watch off his wrist to wear for the film. Besides being featured in the legendary spy series, the ref. 6538 is an early Rolex Submariner model, making it pretty difficult to track down. If you want to wear this piece of film history on your wrist, it will easily set you back a minimum of tens of thousands of dollars and prices can reach well into the six-figure range. 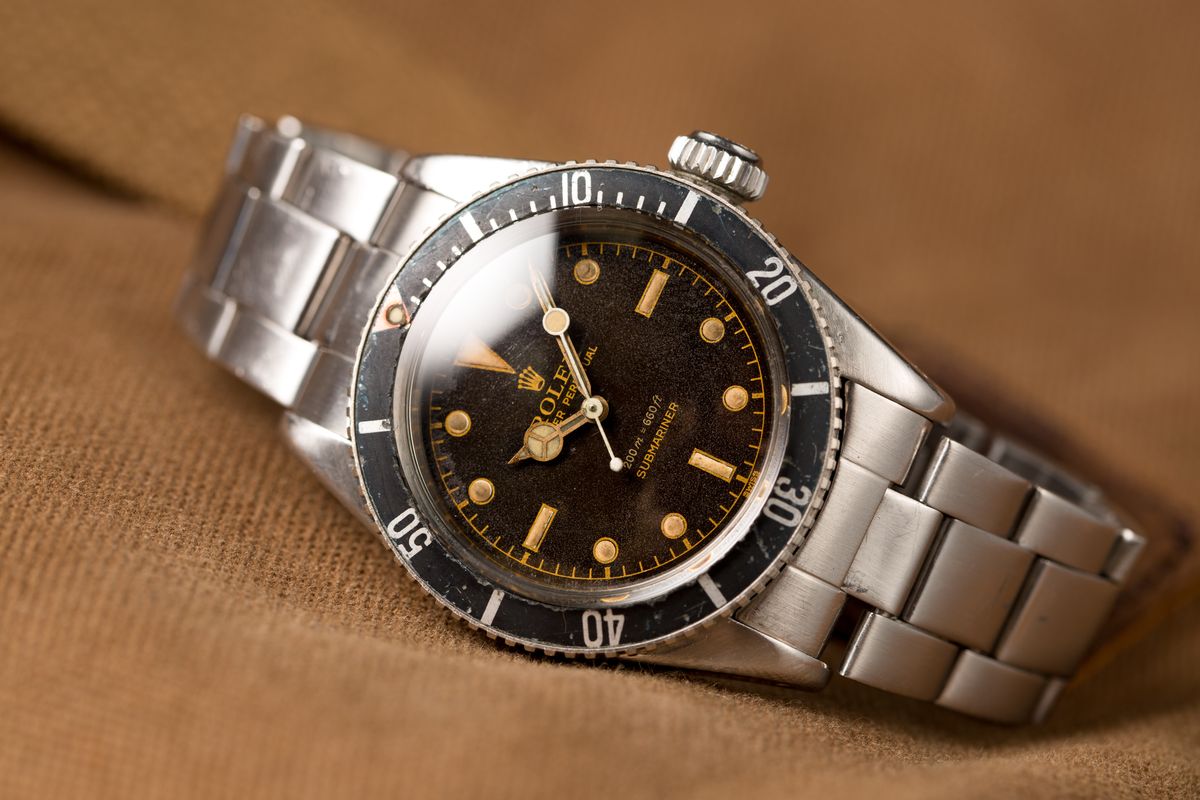 Click here to discover the full history of the Rolex Submariner.

In 1971, two years after it was first released, the Heuer Monaco was made instantly famous because Steve McQueen decided to strap one on for the film Le Mans. Rumor has it Omega approached McQueen about featuring one of their watches in the film, but he chose the Heuer Monaco on his own. Some sources say that Heuer provided the watch for the film, while others maintain that it was McQueen who chose to wear it – some say he was even inspired by Jo Siffert, a famous race car driver at the time, who famously wore Heuer chronograph watches. In the movie, Michael Delaney sports a blue dial version of the square Monaco on a black leather strap, which is still associated with the Grand Prix today. Without the star power of McQueen, who knows what the fate of this iconic watch would be today. 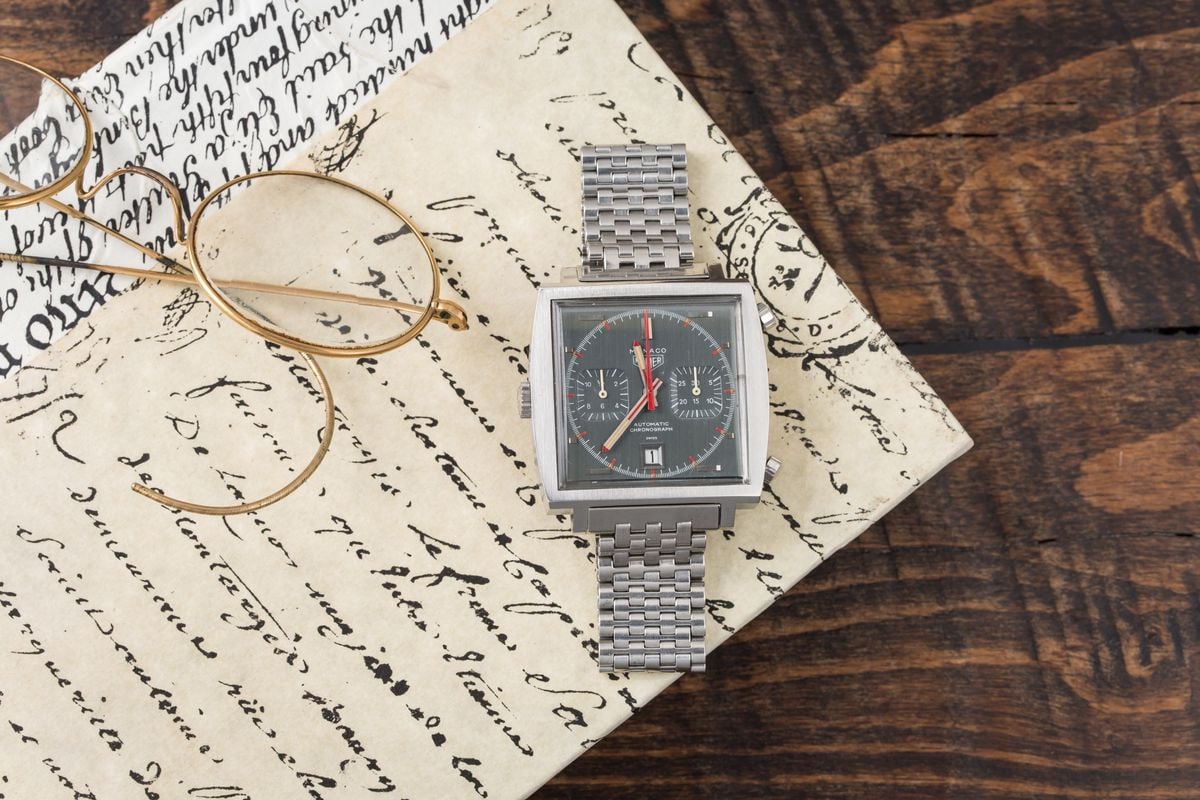 Click here to learn more about the vintage Heuer Monaco.

This watch only made a cameo in the famous film, Glengarry Glen Ross. But today, we’re still talking about it. Alec Baldwin, who plays an outside exec “from downtown,” delivers these cutting words and flashes this famous yellow gold Rolex Day-Date and it immediately goes down in movie history. This watch is already famous for being worn by world leaders, dignitaries, and celebrities – the movie plug was really just a boost for this iconic gold Rolex watch. 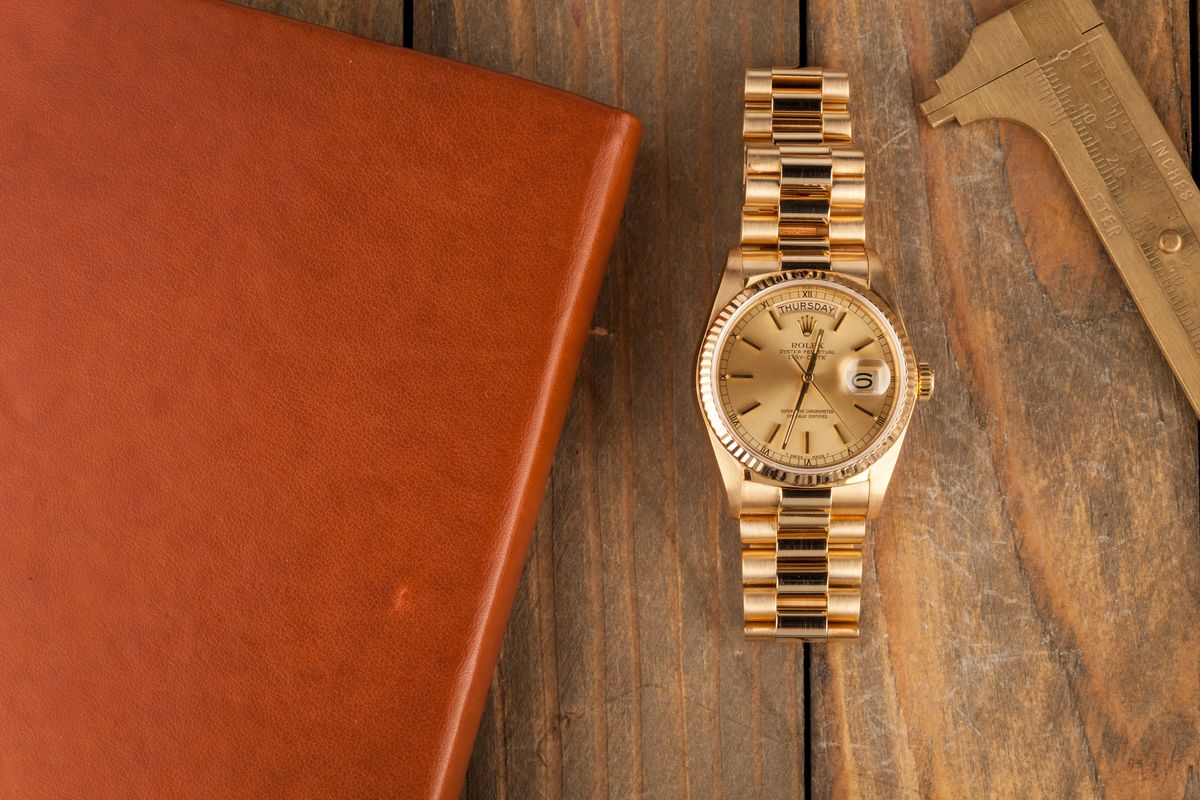 Click here to learn about the nicknames and defining elements of the Rolex Day-Date.

This watch feature wasn’t orchestrated by the studio, but rather the actor himself. Sylvester Stallone famously loves Panerai – the story goes he discovered the Italian brand while filming a movie there and has worn Panerai watches ever since. It’s a perfect pair if you ask us, the oversized, masculine feel of Panerai perfectly matching the Sly brand. The actor even had his own versions called, ‘Slytech,’ and has worn Panerai so much that he’s credited with helping revive them in the 1990’s. But back to the movie, Stallone famously wore the Panerai Luminor (the one he supposedly bought in Italy) in the film Daylight where he plays hero Chief Kit Latura. Over the years, Stallone has continued to wear Panerai in his films, including The Expendables 3.

Click here to for our complete buying guide on the Panerai Luminor.

Some think Marlon Brando cemented his ‘difficult’ reputation on the set of Apocalypse Now when he supposedly was told to take off his Rolex GMT Master ref. 1675 for filming, but refused. Apparently he insisted on wearing the watch, but to make it fit in more with the setting of the movie and his character Colonel Kurtz, he popped the bezel off. The movie quickly became a classic, as did Brando’s ‘naked’ GMT Master 1675. It actually went up for auction in 2019 and sold for an eye-popping $1.95 Million. You can still get your hands on a vintage ref. 1675 today, but it won’t be Brando’s. 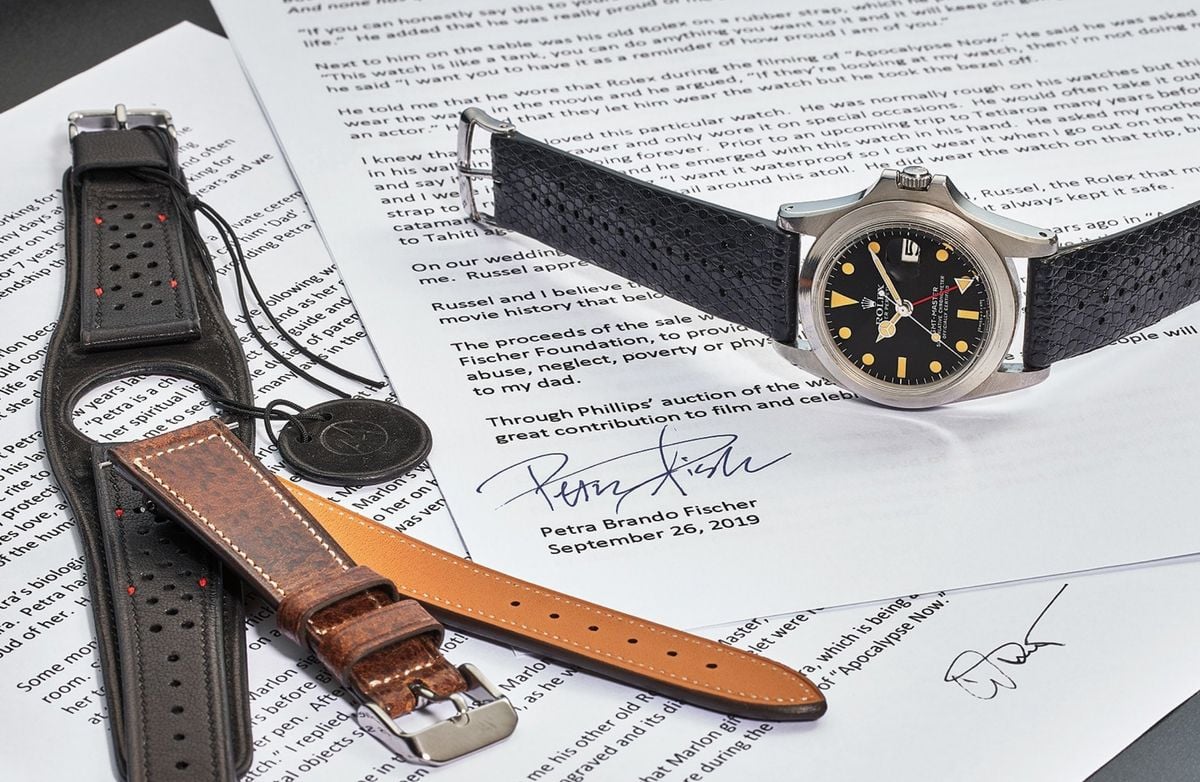 Bracelet: Stainless steel Oyster (worn on a black strap in the film)

Click here to learn more about the history of the Rolex GMT-Master.

Okay, this was an obvious choice, but still, not one that should be forgotten! In the Apollo 13 movie, Tom Hanks wears an Omega Speedmaster – the official watch certified for space flight by NASA. When Apollo 13 went into space, this is the watch that the astronauts actually wore, including NASA’s Gemini 4 mission and the historic moon landing. The Omega Speedmaster is easily one of the world’s most famous and iconic timepieces, seeing it on the silver screen just cements its status – especially because it was on Tom Hanks’ wrist. 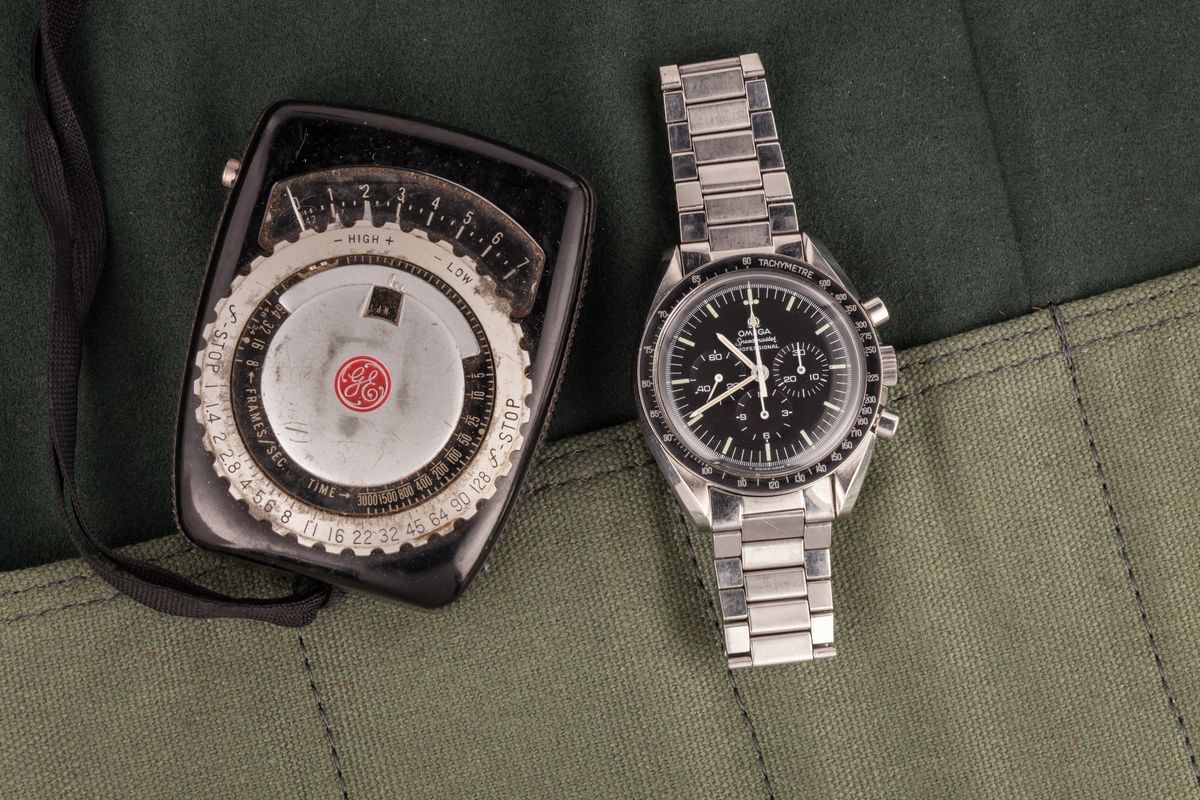 Click here to learn more about the Omega Speedmaster.

Christian Bale is known as one of the world’s best actors, so it’s not really a surprise that he’s helped make multiple watches reach ‘movie icon’ status. But, when it comes to Batman, we do have to note that back in the day Val Kilmer’s Bruce Wayne famously wore a luxurious, beautiful, Swiss, Jaeger-LeCoultre Reverso. So when Bale took on the role of Bruce Wayne for Batman Begins, it only made sense that he donned the Reverso Grande Taille. Later in Christopher Nolan’s trilogy, Jaeger-LeCoultre even created a limited edition Grande Reverso Ultra Thin Tribute to 1931 which even featured a Batman symbol. Talk about iconic, right? 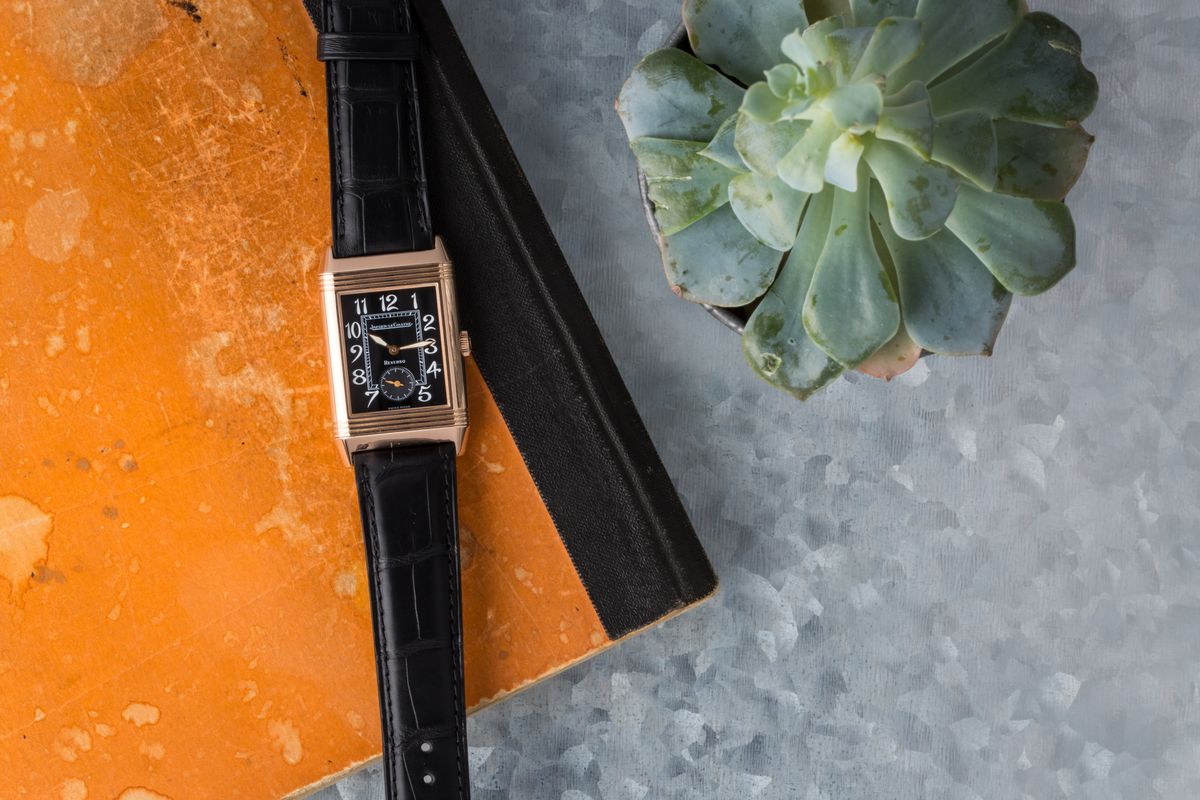 The post The Most Famous and Iconic Movie Watches of All Time appeared first on Bob's Watches.

Cheetah and her cheetos

3 Tips for Buying from an Online Gun Auction

How to Clean Your AR-15 the Daniel Defense Way