The problem with modernizing (and the Governor General)

Paul Wells: This is not only an ill of the Trudeau Liberals, it's a widespread ill of our age—ignoring the boring, hard-to-fix work in favour of the new The post The problem with modernizing (and the Governor General) appeared first on Macleans.ca. 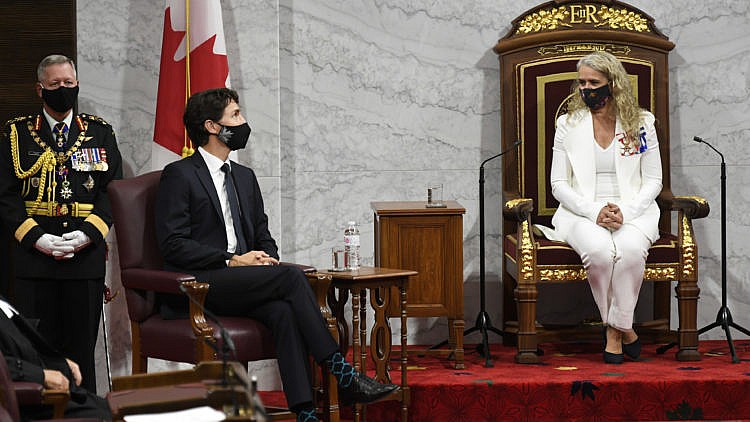 I did a TV panel on Thursday night and of course we mulled the fallout from Julie Payette’s resignation. I can usually be counted on to relish a good Trudeau scandal, but this one doesn’t produce the usual thrill. The mistake was made in 2017, it was obvious pretty fast, and ignoring the problem—which is definitely always an option in government—almost worked, until it became impossible to ignore the appointee’s effect on a workplace and the people in it, who have as much right to respect as anyone. And then she walked away. It was weird and it’s done.

One of the other panelists said Payette was chosen to “modernize” the office of Governor General. This would make sense, as efforts to modernize the office are almost as old as the office itself. You might almost says modernizing the office is one of our oldest traditions. Vincent Massey became the first Canadian-born GG in 1952. Pierre Trudeau wanted the Queen to be represented, at last, by a woman, and so Jeanne Sauvé became Governor General in 1984. Jean Chrétien was stung by criticism that he’d nominated a standard-issue party lifer, Roméo LeBlanc, the first time he had to pick a GG, so his next nominee was Adrienne Clarkson in 1998. Paul Martin appointed Michaëlle Jean. Justin Trudeau appointed Payette, probably less of a trailblazer than most of her predecessors, except she had been in space, and poli-sci majors are always amazed by someone who can do math.

It soon became apparent that when modernizing an office, it is handy to have somebody who will show up at the office. The instrument of the Canadian federal state’s action is an “order in council,” which is something the sovereign orders upon advice from her “council,” the Prime Minister, the other ministers, and their bureaucrats. Under our system, the sovereign always takes the advice, but we still need the signature. A bill becomes law, a judge gets her pension, an ambassador packs her bags, tariffs rise or fall as soon as the Governor General signs a piece of paper, and not before. Payette became GG in the fall of 2017. Five months later somebody who’d worked on a prominent order-in-council appointment told me the lucky appointee would be named just as soon as Payette signed the paperwork. “That’s becoming a problem,” my acquaintance said. Five months into the job.

Periodically delegations of public servants would make the short drive to—to—to wherever Payette was holed up that day, to plead with her to sign more documents. (One way the current government has modernized its offices is that nobody sleeps where their predecessors slept. It’s like the gig economy with cots.) She would listen blandly and then go back to taking her time. Meanwhile judges weren’t getting their pensions, new ones weren’t getting appointments, trade deals were in limbo. These are not guesses I’m making, they’re things people have told me who needed the office to run more smoothly. One theory is that the GG wanted to read background information on all this stuff so she could feel like she’d made a decision. A competing theory is that demanding your staff recite the names of the planets in order just takes a lot of time. I myself usually throw Pluto in, for old time’s sake, and that adds precious seconds.

What’s the job? You give an installation speech, a kind of statement of your theory of Canada on your way in. Payette didn’t write hers down ahead of time. Turns out that would have helped. You show up at military events as commander-in-chief. And she did, sometimes! You play host to cultural events. Or not. And you enable the Canadian federal state to do the many things a government needs to do, by signing papers. Which she totally did. Eventually.

I’m not sure what there is to modernize in all that. Maybe modernizing isn’t all it’s cracked up to be.

The only governor general in the last 20 years who didn’t have a mandate to modernize the office was David Johnston. He was tasked with being a good Governor General. He wasn’t against modernity! As president of the University of Waterloo, he had probably presided over more real scientific progress than, say, most astronauts. And it’s not even obvious that he was the best 21st-century GG. I was always impressed by Adrienne Clarkson. What Clarkson and Johnston shared, in fact, was great affection for the assignment. Welcoming people? Check! Hosting things? On it. Making good use of official residences? You bet. Knowing something about confidence conventions in a parliamentary system, so they won’t screw up if it’s unclear who won an election and the GG has to make the call? Clarkson spent much of the 2000 election campaign on the phone to scholars and observers, in case Chrétien’s Liberals lost their majority. Johnston produced a set of rules and principles for the aftermaths of tight elections that has already been used by lieutenant governors in British Columbia and New Brunswick after squeaker elections in those provinces.

There’s no requirement that the GG be an avatar or incarnation of a government’s narcissistic sense of itself as the nation’s guiding light into a more enlightened tomorrow. The GG just has to ensure that the vice-regal function is competently exercised, that ceremonial functions are exercised with grace, and that staff aren’t traumatized. Neither is there, of course, any need for the viceroy to be old, straight, white or male, let alone all four at once. The only real requirement is that the occupant be capable of seriousness in the execution of serious work. That attribute is widely distributed through the population, but we miss it when it’s absent.

We all learned a lot in 2020, but one lesson that could use underlining is that many of the problems in a modern society aren’t modern problems. They’re remarkably old-fashioned. Caring for old people. Housing the homeless. Supply-chain logistics. Border security. Federalism. I’ve surprised colleagues at other publications with my occasional sarcasm at the notion of “building back better” after the COVID catastrophe. Reasons for the sarcasm include this: you can work on exciting new problems just as soon as you show any interest at all in the problems that are boring, decades old, hard to fix, unrewarding electorally, and directly responsible for thousands of Canadian deaths.

In his 2019 book Transaction Man, the American journalist Nicholas Lemann traces the decline of career employees and lifelong professional loyalties as an organizing principle of American society and the rise, beginning in the 1980s, of a blue-chip gig economy—people who arrive late to a mess and leave it early, pocketing a tidy fee and never pausing to look back at what happened later. Think Dominic Barton. “Transaction Man thinks of himself as an idealist, someone whose work will benefit humanity,” Lemann wrote. “He’ll alleviate poverty, help conquer disease, give opportunity to the underprivileged, make markets function better….

“Transaction Man is fundamentally skeptical about institutions and organizations, especially long-existing ones. He believes they are stodgy, bureaucratic, stuck in the past, and too beholden to traditions and arrangements that have built up over time. He’d use terms like ‘innovation,’ ‘disruption,’ and ‘breaking down silos’ to describe healthy social processes, and ‘incumbents’ or ‘rent-seekers’ or ‘special interests’ to describe those who are standing in the way of them. He believes there is a rational, efficient solution to every big problem, and that it can usually be achieved by bypassing or even eliminating existing structures and replacing them with something more fluid and unconstrained.”

Lemann’s claim, of course, is that Transaction Man overrates his own cleverness. “In polls, faith in the core institutions of American life… has been falling for decades. In response, we persist in thinking about solutions that would continue to weaken these institutions, to the point that it would become nearly impossible for them to regain our trust.”

A Prime Minister who had never been a cabinet minister, surrounded by advisors who had never worked for a Prime Minister, handled an important institutional appointment by managing to find a Governor General who had no curiosity about the job. That’s why I’m not too vexed about the mistake: second time around, they will almost certainly do better. But it’s still worth thinking about why it happened. This is not (or not only) the ill of the Trudeau Liberals, it’s a widespread ill of our age. When vaccine delivery suffered inevitable early difficulties last month, the Conservatives’ putative best mind on health care, Michelle Rempel, tweeted—of course she tweeted—that “we need a moon shot.” Apollo 11 landed seven years after Kennedy’s speech. A moon shot is probably not what we need. What we need is to get better at the sorts of things you need to do if you want to deliver vaccines, including the aforementioned supply-chain logistics and federalism, things you can’t fix on Twitter.

The impulse to do something new is not necessarily incompatible with the need to do things well. But if you worry too much about the former, because of self-image or marketing imperatives or whatever, it’s funny how often you forget about the latter.

The post The problem with modernizing (and the Governor General) appeared first on Macleans.ca.

Biden and Trudeau plan next bilateral confab in reset of Canada-U.S. relations

Justin Trudeau warns tougher travel restrictions are on the horizon, and Canadians...

A heat map of coronavirus cases in Canada