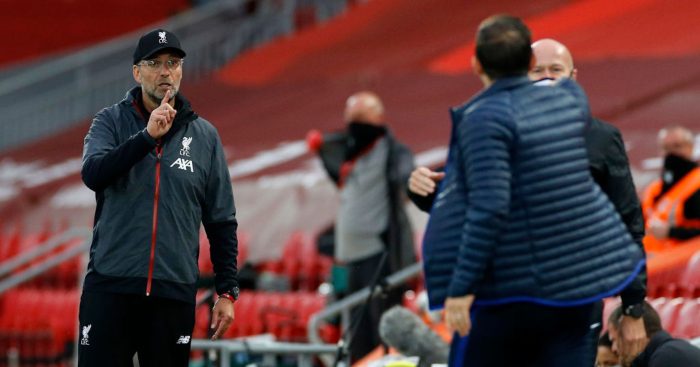 Everybody comes into the Premier League reckoning this weekend. And thanks to our partners, Betfair, each week we’ll be looking at a treble of fascinating things to watch out for in the televised games. Chelsea v Liverpool is the highlight.

A further setback for Mourinho at Southampton
Tottenham Hotspur were , achieving the inglorious feat of sapping all the new-season optimism within just 90 minutes of the 2020/21 campaign. Already, Jose Mourinho faces , with most of the punditry focusing on Spurs’ inability to press the ball.

Mourinho doesn’t believe in a high press or a high defensive line, instead deploying a cautious mid-block that deliberately gives the other side possession in order to create counter-attacking opportunities. That rarely works in the modern game, and at Spurs has frequently led to ambling performances in which the players look lazy, tired, unimaginative or all three.

The flaws go deeper than that. Mourinho also expects his players to freely improvise their attacks, which is fine when confidence is high but becomes a serious problem when heads drop. The combination of failing to press while feeling the pressure to be creative means Spurs are vulnerable whenever they face energised opponents. Self-esteem quickly drains when you let James Rodriguez dance around as he pleases, and soon enough there’s no emotional energy left to build your own attacks.

Few teams are more naturally energised than Ralph Hasenhuttl’s Southampton, a scrappy and tactically intelligent outfit with a keen eye for sniffing out opposition weaknesses and exposing them in explosive bursts. The most likely outcome on Saturday is a repeat of their 1-0 victory over Spurs on New Year’s Day.

Back Southampton to win at 11/5 (Betfair)

Chelsea unable to resist the allure of an end-to-end game
For Frank Lampard to best Jurgen Klopp he needs to do everything in his power to avoid a repeat of the carnage that unfolded back in July, when Liverpool beat Chelsea 5-3, and to avoid a repeat of the carnage . Liverpool’s 4-3 win over Leeds United should have been more like 8-2, such was the hosts’ dominance once Marcelo Bielsa emptied out central midfield.

If Chelsea pour bodies forward with similar abandon, they’ll probably get hammered. Lampard’s problems in the defensive transition are well-documented; his unstructured attacking patterns the polar opposite of Bielsa’s discipline and regulation. And yet… how does Lampard resist the temptation to stretch this game out, to yank at the Liverpool lines and turn what should be attritional trench warfare into one giant no-man’s-land?

It’s what happened in that 5-3, and the arrival of Timo Werner and Kai Havertz has only added to the sense of impending chaos. Against Brighton, these two repeatedly made runs on the shoulder of the last defender and were slipped through by long forward passes. Liverpool’s high line is irresistible, the vulnerability behind their roaming full-backs too enticing not to hit.

And so Chelsea will rush forward in numbers only for Liverpool to break back the other way, pulling both defensive lines up and down to create a chasm in the middle. Chelsea’s inability to defend counters, and Liverpool’s genius at enacting them, suggests another thriller going in Klopp’s favour. Keep an eye on Naby Keita, the slaloming runner finally finding his feet in England – and made for an open game like this.

Wolves putting Guardiola under serious pressure
This is surely the most important season of Pep Guardiola’s managerial career to date, and he could not have been given a more difficult start. Wolves did the double over Man City last year, winning 3-2 at Molineux and 2-0 at the Etihad, and have lost just one of their five meetings since Nuno Esperito Santo and Guardiola were in the dugouts.

City’s defeat in October, coming so soon after losing at Norwich, effectively ended their title challenge. A would be equally significant.

Back-to-back title wins means Guardiola’s Man City legacy is secured, of course, but nevertheless we are beginning to narrow our eyes, to cock an eyebrow, at how events are unfolding in Manchester. The 3-1 defeat to Lyon was hugely damaging, confirming that he overthinks big Champions League ties as we approach the ten-year anniversary of his last European title.

The way in which City’s title challenge collapsed probably deserved more attention, too, but was eclipsed by the feel-good story of Liverpool’s success. If Guardiola takes another hit at Molineux this weekend, pundits will start to ask serious questions about eras ending and about successors. If that happens, the psychological damage could be enough to knock Man City off balance and once again put Liverpool in the driving seat.

Then again, an optimist would say Wolves are the perfect opponent for Man City to draw a line under 2019/20 and resume their domestic dominance. Nathan Ake is a good-enough upgrade to avoid the defensive errors that characterised their defeats to Wolves last season, plus Rodri is considerably more settled now than he was in December when the sides last met. And then there’s Ferran Torres, an exceptional young player ready to make his debut. Man City are still favourites to win this game and hit 95+ points this season.

And yet things have never felt this unstable under Guardiola. Dropped points at Molineux wouldn’t trigger the alarms, but we’d certainly start to hover over the panic button.

Back the Wolves-Man City draw at 17/5

Back over 3.5 goal in Chelsea v Liverpool, Wolves and Man City to draw and Southampton to beat Tottenham at 33.79/1

Spurs avoid disaster, but little to cheer in Plovdiv

It’s a battle between … The post Brighton v Portsmouth: Follow it LIVE with F365 appeared first on Football365.